posted 2 years ago
I am glad I found this.  I live in a similar temperature zone (border 7b/8a) and am also doing a small food forest type endeavor on about 1/3rd acre.   I am growing similar trees and vines but live in a suburb.
I am now adding vertical growing to my vegetable garden (cattle panel arches and trellis) since I have a lot from when I had to protect everything from my daughters bored German Shepherd puppy. Now she and pup moved to work in Florida I have new uses.
I live on a slope so trapping water is my next goal and also making some raised beds for blueberries since my soil pH is around 6.5 to 6.8.
I look forward to your next video.

posted 2 years ago
Thanks Dennis!

I always enjoy your posts on what you're growing.

posted 2 years ago
Hey Steve, love seeing your food forest. Looks a lot like home.  Strange weather we are having in these parts this winter. Normally the shiitakes have long since gone to sleep, but they don't know what to do this year! 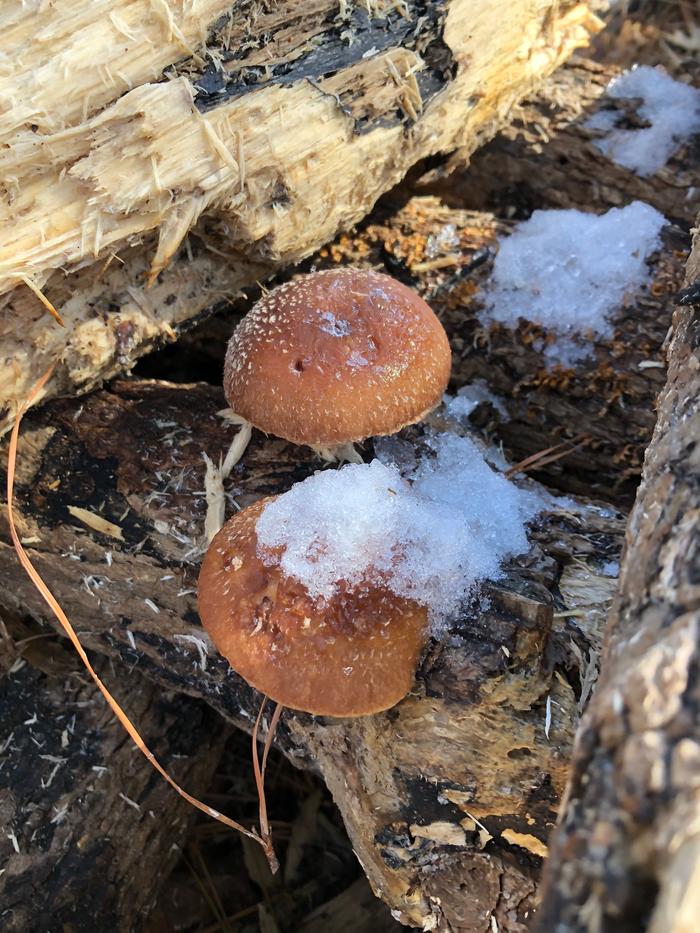 posted 2 years ago
Thanks Mark!

Hey neighbor! Yeah this weather sure has been interesting this year hasn't it. I think a lot of the stuff doesn't know what to do, and I think it's the earliest some of my trees have ever started blooming.

Cool shitake pic, thanks for sharing!

My largest plum tree didn't end up being what it was supposed to be, but the flowers smell heavenly! They cover the tree and can be smelled from a long way away. I didn't care for the plums it produced, but someone else liked them. It has a little astringency, and I have a low tolerance for any bitterness, and it also wasn't that flavorful to me, but I'm glad someone else liked it. I'll probably keep it just for the fragrance of the blossoms, and I also may graft some of it over to other varieties.

The black locust grew so much that it outgrew its fencing! I think I'll have to cut the fencing off of the tree to remove it without damaging the black locust.

I have an older apple tree in the shade that hasn't grown very much recently, trying to decide what to do to give it a boost.

The honey locust tree didn't grow anywhere near as much as the black locust tree.

The apples and most of the mulberries are still dormant.

Some willow trees are starting to send out some new growth that looks really healthy. I might use some of the cuttings to make some willow water this year.

I'm planning to hopefully start digging some of the pools in the food forest soon! I'll be using them to catch, hold, and soak in rainfall slowly, and also use the soil that I dig out to put out around the existing fruit trees to help the soil drain better close to them. Maybe I'll have them dug out some by next week!

Welcome to week 3 of the food forest tours!

Here's Part 1 for the week of 2/23/20, featuring rooting hardwood grape cuttings and willow, planting peach seeds in the natural raised bed, and more!

The grape vines haven't starting budding out yet.

The blueberries are in all different phases of blooming. Some have swollen fruit buds and others are blooming like crazy!

I don't prune back the tops of the blueberries (or any part) like I've seen some people do. I leave it to make as many blueberry flowers as it wants to, that will soon turn into yummy blueberries. Hopefully they survived the snow and freeze!

I don't think I've shown this section before that has some of the hardwood grape vine cuttings that I'm trying to root. These cuttings are from my table grape vines in the first part of the video. I've stuck willow hardwood cuttings among them to hopefully get some willow trees also and to see if they'll help the grape vines root as well. I used some of the leftover pieces of willow and made some willow water that I poured over it all a few months ago when I stuck the cuttings. Hopefully we'll have some rooted grape vines and willow trees soon!

I planted some peach seeds in the natural raised bed. See the link below for the video from when I made the natural raised bed originally. It's just been a little over two months since I built it, and you can see how much the leaves have already broken down. The worms are feasting, and the soil looks super rich and healthy!

The soil was so healthy, almost every time I planted a seed, I disturbed a large worm, and the worm crawled out of the soil to say hey and find a new spot. I'm glad they're enjoying being there and helping to create the healthy soil of this raised bed, and I hope the peach seeds do well here!

None of the pomegranates are budding out yet. Hopefully they have made it through the cold weather alright and will be budding out soon when the weather gets warmer!

The older peach tree has a lot of flowers blooming currently. Some of the blossoms were completely covered in snow and ice, hopefully they survived. The vegetative buds at the ends of the branches look like the beginning of some leaves are starting to grow.

I decided to cut off the rootstock branches on the young peach tree to let it put more energy and growth into the main variety. I had to cut off more than 50% of the tree! (Gasp!)

I've heard it repeated a lot that it is best to not cut out more than 30% of the wood from a tree. I actually prefer to cut as little as possible, usually just damaged or dead areas, and way less than 30%. This tree is so young and vigorous though, I don't foresee any negatives to cutting it back so much at this time. I am actually hoping that the main variety will now send out some vigorous growth this year. If 50% was removed on a larger tree, it would most likely change the whole structure of the tree and send up an army of vigorous waterspout shoots in reply, but for a tree this small, I'm thinking that it should be fine and will benefit from the rootstock branches being removed.

The rootstock branches were all different sizes, so I used a few different tools to cut off the three branches. One was small enough be removed by hand pruners. The second one was large enough to need loppers to remove it, and the third was growing right up against the trunk of the main variety, so I needed to use a small hand saw to cut that one, so I wouldn't damage the main trunk.

When using the hand saw, I generally like to remove the branch a few inches away from the target cut area, unless it was a really tiny limb, so that it removes a lot of the weight off of the area that I will be cutting, which will minimize damage such as ripping or cracking as a result of cutting a full heavy branch off.

All three rootstock branches were removed successfully with nice clean cuts. I'll be hopefully mounding up soil around the tree soon which will cover these wounds, and hopefully I can add enough soil to cover above the graft union and encourage the tree to send out roots from the main variety and become an own root fruit tree!

posted 2 years ago
This video, part 3 of the weekly food forest tour for 2/23/20, discusses creating pools (mini ponds) in the food forest and how I barely prune my fruit trees to just remove damage most of the time.

I've started digging some of the pools for my food forest! This one is only about 6 inches deep right now. It filled up with water so fast that I didn't have time to dig it deeper!

I hope to create a lot more of these pools very soon, some smaller and some bigger all throughout the food forest.

I'd also like to connect them so that if one of the pools uphill fills up, it will overflow into the ones downhill. I'd also like to add some small fish in some of them, where I can get the water deep enough to remain filled. Some of them I want to purposefully have as seasonal pools that will fill and dry up throughout the year. These pools will hopefully be a great habitat for amphibians and other small creatures.

I did some pruning (mostly not pruning) to remove some damaged wood at the tips of the branches from some deer munching, and tried to minimize the amount of pruning on each tree to just take off what was needed.

I generally don't clean my pruners in between trees. I've found that it's really not necessary unless you are pruning a tree with an obvious disease issue. If the trees are healthy, I don't worry about it.

M. Phelps
Posts: 278
30
posted 2 years ago
i just subscribed to youre channel
i made some small watering holes like that last year which were full to the brim in the spring but bone dry later in the season
i was thinking of making a little sun shade of some kind for the south side to reduce evaporation