Posts: 126
Location: Ava, Mo, USA, Earth
posted 9 years ago
I have a lathe, a big steel bar and a need for a cheap peening jig.  I've seen the pictures and videos, but I don't know what the profile of the two caps looks like.  Are the working edges flat?  At what angle?  Anything not obvious in their design that I might overlook?

Posts: 4
posted 9 years ago
The one thing to watch with peening is that it work hardens the steel then it cracks , A good blacksmith will forge weld any cracks that appear
Andrew Ray
Posts: 165
Location: Slovakia
2
posted 9 years ago
I'm the happy owner of a Slovak made peening jig:
http://www.hvf.sk/naklepavac.htm

Attached is an image with measurements.

The inside length of the cap is 36.5mm, outside it is 48.0mm long.  I suspect the caps have been somehow hardened to resist deforming under hammer blows.

Everything is given as a diameter, though one of my blue markings looks like a radius, it is just meant to show where the diameter is being taken.  The red diameter is (obviously) the diameter of the post to which the caps mate.

It is nice that a few things are less expensive in Europe-- my jig was 11€ and a Rozsutec stone was 2€-- things I keep hidden away because all of my neighbors have the idea that scythe stones are to be used not by firmly sweeping the flat edge against the blade, but by violently grinding down the scythe with the corner of the edge, leading to lots of oddly shaped old scythe stones lying around.

If you need any more details of the jig let me know.  It looks like something pretty simple to make on a lathe. 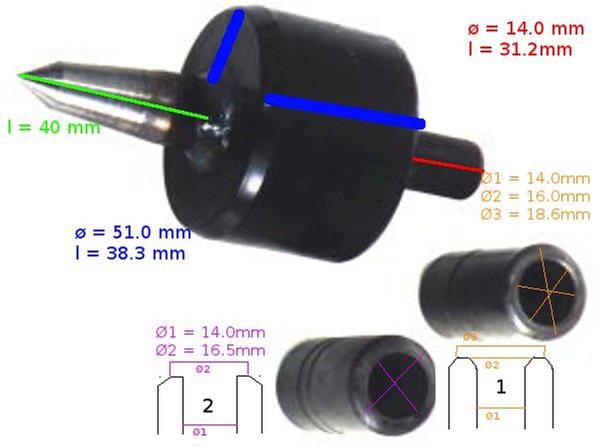 Posts: 126
Location: Ava, Mo, USA, Earth
posted 9 years ago
Freedomlives,  Thanks!  That is just what I needed to know.  Since there are only a few places in the USA that sell them, them seem to carry a premium price.  It will also be more fun to make one of my own.  I hope to get started soon, but the cutters for my lathe are on order.

Jack Shawburn
Posts: 230
3
posted 9 years ago
... so the "Top" of the avil part (that is not shown) - is flat?
and the two  "Cap" parts that contact the scythe blade are flat too?
The part that contacts is just further away in #1

I thought they would be angled... Thanks !
Andrew Ray
Posts: 165
Location: Slovakia
2
posted 9 years ago

Jen0454 wrote:
... so the "Top" of the avil part (that is not shown) - is flat?
and the two  "Cap" parts that contact the scythe blade are flat too?
The part that contacts is just further away in #1

Exactly, that is all there is to it.

The jig doesn't make as thin an edge or as great an edge as a pro with a hammer and anvil, but it has worked well enough for me to get the scythe pretty sharp for mowing hay.

I found this webpage gives a good description how to best use the thing once you've made it:
http://www.scytheconnection.com/adp/docs/peening.html
Jack Shawburn
Posts: 230
3
posted 9 years ago
Thanks - I practised peening on a Cleaver and
its not all that difficult on a slightly curved anvil and regular hammer.