posted 2 years ago
Amidst my many other projects I decided to start another one. I have been watching videos and reading about sourdough for quite some time, and had wanted to try getting a Starter going. I kept researching and found methods from quite complex to very simple, and I realized that the real key isn't precise measures of flour and water. It's good flour and clean water. Rye flour sounded like it would be the best, but we didn't have any and my wife had two types of wheat berries on hand. Spelt and soft white. I figured the worst that could happen is it doesn't work and I throw it out. These were also whole berries, organic, non-GMO. I reasoned that they probably have the best chance of containing natural yeast over something from the store. So, I ground about 4 cups of soft white wheat berries and mixed a quarter cup of flour with a quarter cup of water in a quart mason jar and left it on the counter overnight. Next morning I could see a few bubbles on the surface, so another quarter cup each  of flour and water and I let it sit on top of the fridge with the lid on loose for the next day. The next morning I removed the lid and smelled it. It was... different. Not quite what I was expecting and not particularly appealing, but not what I thought would indicate that it was bad. So a little more water and flour and let it set. I also did some research on what to be looking for and this video is by far my favorite. It's part of a series and worth watching for the entertainment alone in my opinion.


I did not split it or discard any. I couldn't get past the idea of just throwing out half every day. So I started smaller than most recommendations, and fed less. By the 4th day we had good bubble formation and fermented aroma when I removed the lid. By now I had a fair bit of starter going and I needed to reduce volume so I started searching for options and landed on this one.

They were tasty, but much denser than I expected. I chalked it up to the flour and young Starter. After work I went to the local Walmart and was pleased to find an organic all purpose flour from Arrowhead Mills. This had been recommended for feeding. I also picked up a bag of King Arthur Unbleached Bread Flour to try for baking.

I fed the Starter that night with the new flour. In the morning there was a marked difference in the amount of bubbles and when I removed the lid to feed it again the aroma made me thing of strawberries. I don't know how else to describe it. Sweet, fruity, a hint of fermentation. It smelled good.

A few days later I made a batch of sourdough pizza crust roughly following the King Arthur recipe as I had all the required  ingredients on hand.

My family agreed it was a success. If you have had pizza from Papa John's, the crust was very similar, only it tasted better.

The following week was hectic with work, but I decided to take the leap on bread Friday night. After reading recipe and recipe after recipe that was not only different ingredients and amounts, but the technique was different. Screw It, ain't nobody got time for this. Using the ingredient list from Patrick Ryan's recipe I added everything to a large bowl and brought it together as a rough dough, then I let it sit. An hour later I came back and basically grabbed a side and pulled up on it and rolled it onto the top of the dough ball. I worked my way around the bowl two or three times then let it sit for half an hour and repeat. I put it in the fridge over night , covered, and left it. In the morning I repeated the "fold knead" and then split the dough in half. I just eye-balled it, no measurements. Half was hand rolled into a loaf shape and put in a loaf pan, the other half was hand rolled into a ball and placed on a well floured tea towel in a dutch oven. The loaf I baked Saturday night. The Dutch oven one I let sit overnight and baked Sunday morning after making the second round of sourdough pancakes.
The second try and the pancakes was MUCH better. Very fluffy.
Once that was all cleaned up I turned out the loaf from the dutch oven and baked it on on a pizza stone in the oven. Since the Dutch Oven is a flat bottom, the loaf turned out kind of squatty, but it had a much punchier taste. We loved it.

This past weekend I made another two loaves of sourdough using the bread hook on the stand mixer to see how that would turn out. The end result was the same, but the process was a lot easier than my previous lazy method of not kneading.

Mix ingredients to rough dough.
Method A) Let sit for 20-30 minutes, fold over itself in the bowl working all the way around the bowl a few times. Repeat 2-4 times until nice and smooth
Method B) Dough hook on the mixer and let it do the work until you can get the window pane effect (See Patrick Ryan's video link above). In my case it was about 10 minutes.
Cover and let sit in a cool place, like a refrigerator, about 12 hours or overnight.
Knock the dough down using the fold over method.
At this point you can part the dough our for loaves or let it sit another 12 or so hours to continue developing the flavour profile.
Butter your loaf pan and place the the dough in the pan. Let rise until doubled or so and then slice the top with a sharp knife or razor.
bake at 425 F for 20 minutes with steam via the baking pan with water method.
Remove the pan after 20 minutes and bake another 20-25 minutes. 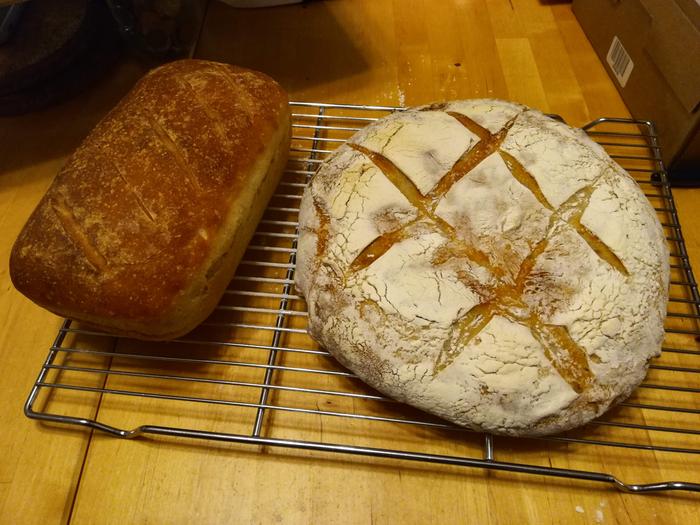