posted 2 years ago
The wild ancestor of head cabbage, kale, collard, Brussel Sprouts, kolrabi, cauliflower, and broccoli is native to coastal Europe and the Brittish isles and it naturally grows on rocky sea cliffs. It is federally listed as endangered in the United Kingdom so seeds from wild cabbage are hard to come by. From what information I've been able to gather from PFAF and Wikipedia, it is a biennial plant that doesn't flower until after overwintering. Out of all the domesticated forms of Brassica oleracea, the cultivars I have grown that seem the closest to the wild plant seem to be kale, collard, and gai lan/ Chinese Kale (Brassica oleracea var. alboglabra). Kale and collard are biennial like the wild cabbages that grow in coastal Europe and the Brittish Isles, but gai lan is an annual like broccoli and cauliflower which sets out loose flower buds about a few months after planting.

According to the North America Plant Atlas at bonap.org, escaped, wild populations of Brassica oleracea have been recorded in southern California and coastal New England as well as in a few scattered pockets throughout the United States. I am most interested in the populations recorded in New England because of the region's proximity to the coast and low winter temperatures. If the recorded populations in New England are self-sustaining and still present at the reported locations, they may either be descended from a very cold-hardy strain of biennial cabbage/collard or they may be descended from annual cultivars of cabbage. According to the New England plant atlas and bonap.org, populations of free-growing cabbage have been reported in Berkshire, Bristol, Essex, Middlesex, Nantucket, and Norfolk counties in Massachusetts; in Fairfield, Lichfield, and Middlesex counties in Connecticut; in Providence county in Rhode Island; and in Lamoille county in Vermont.

I am aware that there are a few members on this forum that live in coastal New England near Massachusetts and Connecticut. I would like to know if anyone from this area has found anything looking like broccoli or collard growing by rocky seashores and if they have had any experience foraging it or wildcrafting the seeds Because my chinese kale and field mustard is blooming in my garden, I wouldn't be surprised if any wild populations of wild cabbage in New England were in flower right now.

posted 2 years ago
Good luck with the seed hunt! Here's a pic of some wild cabbage I'm growing here in Australia. It seems to do well in part shade where nothing else grows :)
P1260774.JPG 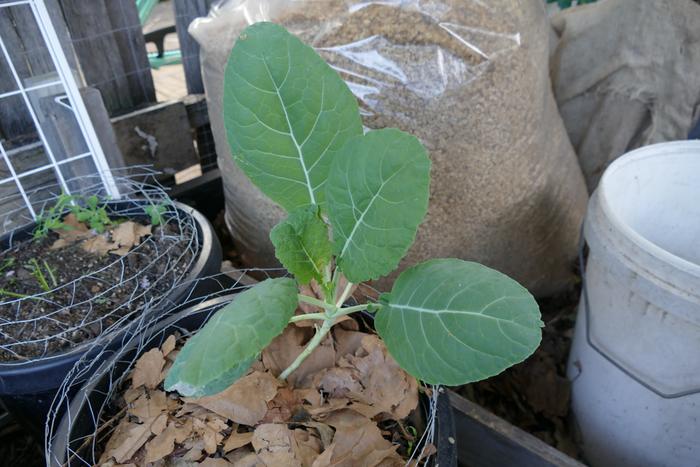 posted 2 years ago
I wonder how you were able to find wild cabbage seeds. I have only found two stores online that sell them. Both are located in Europe and both sources quickly go out of stock. I would ask you for seeds, but I would be concerned about the plants not making it through the winter where I live. Temperatures in my location in Southwest Ohio in the United States usually drop below -20°C (-4°F) at least once during the winter. During the winter of 2017-2018 it even got below -25°C (-13°F).

I am curious how the wild cabbage plants you are growing handle the southern hemisphere summer weather. Sydney looks about 14°C (6°F) hotter in the summer months than the southern range of wild cabbage in northern coastal Spain. Although It doesn't look like it gets much hotter in Sydney than in my Location in southwest Ohio and hot summers have never killed off any kale and collards where I live, I don't know if the crop-wild relative of kale and collard behaves any differently to exposure from Summer heat. Some cultivars of Brassica oleracea tend to be prone to heat stress when exposed to excessive daytime temperatures and large fluctuations in soil moisture.

posted 2 years ago
I bought the plant as a seedling from an online nursery called midsummerherbs, and here is a quote from their website "Wild Cabbage has been growing very well here, and has really impressed me, coping especially well in the high heat of summer in the full sun". They sell a lot of rare perennials and I have no idea where they source them.

posted 2 years ago
I've done some searching on the Harvard University Herbaria & Libraries website and it looks like most specimens of free growing wild cabbage found in New England where the habitat is specified were collected from garbage dumps, abandoned farms, and other waste sites:

(One extra from gbif.org):

Only one specimen was found along a seashore:

Conversely, there seems to be ample evidence that there are established populations of wild cabbage growing along the coastline of California. I found one herbarium sample specimen on gbif.org indicating it was found growing on a rocky seashore:

Another website further confirms there are established populations of wild cabbage growing along the coastline of California:

The presence of escaped populations of wild cabbage growing on the pacific coast is not surprising considering the region's similarity to the climate and natural habitat where Brassica oleracea grows in its native range. Unfortunately, none of the areas along the Pacific coast where it is established get much colder than 20°F (-7°c) so they are not likely to be hardy enough to overwinter where I live in Ohio.

posted 2 years ago
Interesting, this might explain what I found growing in one of my garden beds. I thought it was a volunteer broccoli plant at first, but couldn't figure out how it got there.
So, out of curiosity, I let it grow to see what would happen. This is where it's at now (attempting to upload photos).

Located in New London County, Connecticut ...so, I'm basically surrounded by all the areas you listed in the New England.
Not quite as leafy as your photos or on a rocky shoreline, but it did sprout from between the cobblestones for what that's worth.
Definitely has the feel of a brassica to it.

posted 2 years ago
Judging from the shape of the petioles (leaf/stem junctions) near the flowers in the photograph, this plant looks like either wild rape (Brassica napus) or wild field mustard (Brassica rapa) rather than wild cabbage (Brassica oleracea). Wild field mustard and rape have petioles on the flower stalk leaves that clasp around the main stem of the plant. If you life in an area with harsh winters and these plants flowered on their first year of growth, then the odds that these are field mustard or wild rape plants is higher. Wild cabbage leaves higher up the flowering stem do not have petioles that clasp around the stem. The leaves on the flowering stalk also tend to be serrated, thick, and have a strong blue/green color. Wild cabbage also tends to have duller colored flowers than field mustard (Brassica rapa).

Thankfully, both field mustard and wild rape are still edible. In fact, I am growing field mustard in my garden this year along with black mustard (Brassica nigra) and wild radishes (raphanus raphanistrum). I should be able to post photographs of them later today.

posted 2 years ago
Regardless if wild cabbage grows in self-sustaining populations in New England, there are most certainly stable populations along the pacific coast of California. I found another website that has more information about possible coastal populations of wild cabbage in California: https://www.calflora.org/cgi-bin/species_query.cgi?where-calrecnum=9040
The furthest south along the coast they were recorded in the data set used for the website was at Emma Woods State beach outside San Buenaventura. The furthest north along the coast they were recorded was just north of Mendocino (possibly Point Cabrillo). I found another website herbarium that covers the Pacific Northwest, but only one specimen in Oregon looked promising: http://www.pnwherbaria.org/data/results.php?DisplayAs=WebPage&ExcludeCultivated=Y&GroupBy=ungrouped&SortBy=Year&SortOrder=DESC&SearchAllHerbaria=Y&QueryCount=1&IncludeSynonyms1=Y&Genus1=Brassica&Species1=oleracea&Zoom=4&Lat=55&Lng=-135&PolygonCount=0
Promising specimen:
http://www.pnwherbaria.org/images/jpeg.php?Image=SRP045132.jpg

Considering even in Heligoland where wild cabbage grows the temperature rarely drops below 16°F (-9°C), I wouldn't expect Wild Cabbage populations to grow very far north in the Pacific Northwest if there aren't any established escaped populations of wild cabbage in New England. I am pretty certain that the last posted plant from New England was Brassica rapa and not Brassica oleracea.

Ryan M Miller wrote:
Thankfully, both field mustard and wild rape are still edible. In fact, I am growing field mustard in my garden this year along with black mustard (Brassica nigra) and wild radishes (raphanus raphanistrum). I should be able to post photographs of them later today.

I guess I forgot to post pictures of my mustard I'm growing. I took these pictures about a month ago. The plants are going to seed now.

Thanks for the heads up! I live in RI and often visit coastal MA. I had no idea!

Have you had any luck locating your seeds? If not, I'll keep my eyes open for you.

As for my own brassicas, I have been very excited about perennial varieties over the past couple of years. I have been growing sea kale (Crambe maritima) since 2015, and am attempting to establish cold-hardy perennial kale/collard varieties in my zone 6b garden. I have several promising plants, so this next winter will be an interesting one!