posted 1 year ago
In order to save money on knitting supplies and as an exercize in self sufficiency, I'd like to know what raw materials work well for making knitting needles.

I'm assuming a straight grained wood will work well for knitting needles like Liriodendron tulipifera (tulip tree) or birch (Betulus sp.), but I don't know if I would need a froe or a wedge to split the wood into slivers or a lathe for turning the blanks. I've seen a video for making dowels on Youtube by Matthias Wandel: (https://m.youtube.com/watch?v=z3MNbm3NCHE), but I was hoping I could adapt this process by using a froe instead of a band saw.

For those who don't know, a froe is a one-handled wedge used to split wood along the grain.

I was originally hoping I could make knitting needles out of cattail reeds, but I found them to be too brittle to hold up to regular use.

I plan next to try dried flower stalks from Yucca flaccida or Yucca filamentosa plants since they grow abundantly where I live and the larger stalks are strong enough to make walking sticks.

posted 1 year ago
Do you have access to holly? It's really dense and strong, and even the smallest twigs have no soft core in them. I love using a small holly branch to make hair sticks out of, because all I have to do is debark it and put a point on it. My husband often uses a pencil sharpener to make the point on his hair sticks. My hair sticks are usually the diameter of a size 6 or 7 knitting needle, and I often use knitting needles as hair sticks when I can't find my hair sticks.

It's also often considered a weed shrub and can be invasive, so most people probably wouldn't mind you pruning it for them. Just pick branches about the size you need your needles to be, and sharpen them to a point. They don't usually taper that much, so you should only need to do a small amount of work in making it the same diameter along it's length.


I love it and it's white color for hair sticks, as well as carving small things (I carve little swords and staves for the fairies I make). If I ever needed to make knitting needles from scratch, I'd use holly.

These are all things I've carved out of holly. It really is a lovely wood to work with! 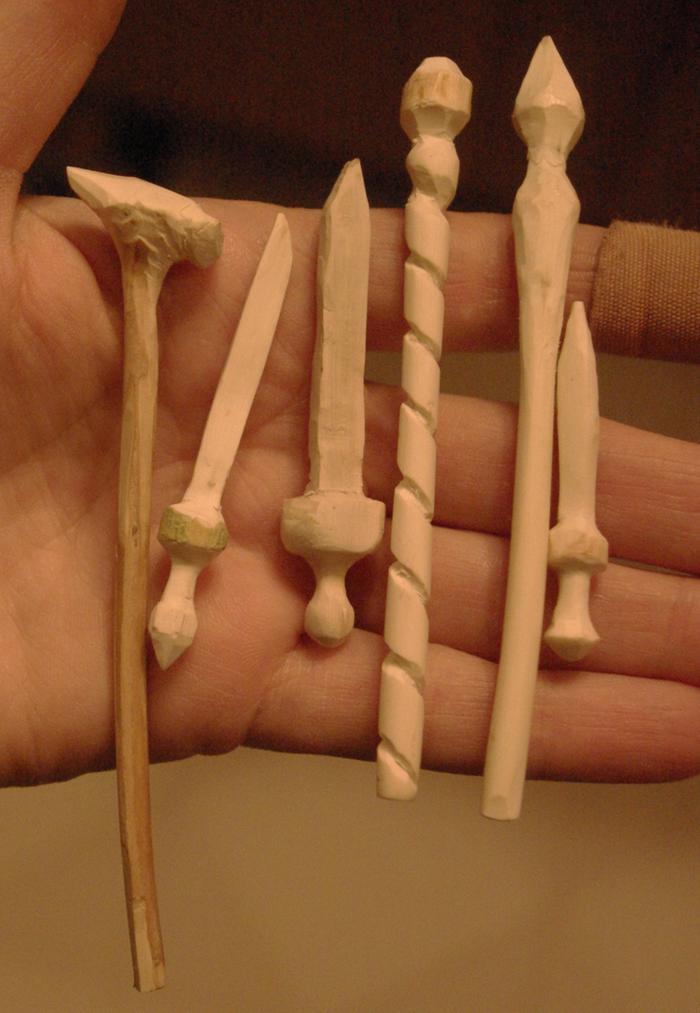 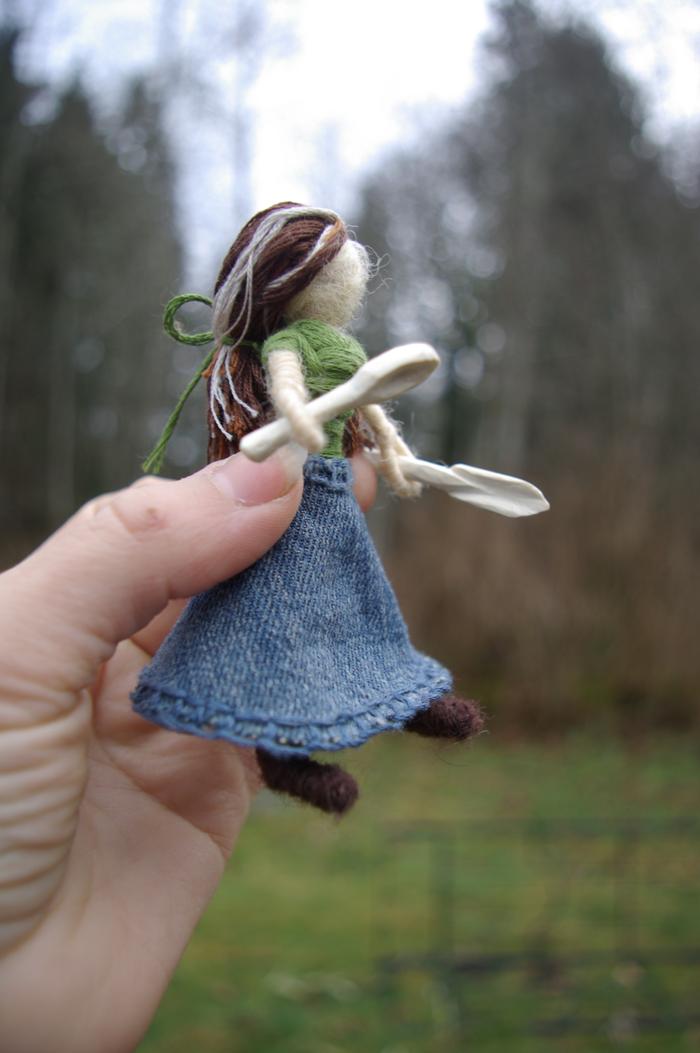 Ellendra Nauriel
pollinator
Posts: 428
162
posted 1 year ago
I used to make chopsticks and knitting needles whenever I was out camping, using whatever twigs looked best. Since mine were the pointy style of chopsticks, they weren't much different from knitting needles, so I guess the only difference was in what I used them for.

Some woods were more finicky than others, but the majority worked fine. If you find the wood you've chosen has a pithy core, offset the point slightly. It being lopsided doesn't hurt, and in fact you might find that for some stitches it works better that way.

As for tools, I just used a pocketknife. By starting with a twig that, when debarked, was already the size I wanted, I didn't have to worry about splitting it.

Everyone has a different style, though. Experiment until you find your own.
Scott Foster
pollinator
Posts: 888
Location: 6a
269
I like...

Ryan M Miller wrote:In order to save money on knitting supplies and as an exercise in self-sufficiency, I'd like to know what raw materials work well for making knitting needles.


Maple is an excellent wood for knitting needles.    It is workable and forgiving.    I suggest using the froe to cut down 1x1 (or smaller squares) Use the straightest grain (quartersawn) pieces.  As you look at the log from the bucked end get the pieces with the least curve in the growth rings.   Let the wood dry before using the froe to size down into sizeable chunks.  hand sand through the grits to get them super smooth.  You can use oil for a finish but it raises the grain so you will have to sand again with a higher grit.

If you make a knitting needle with wet wood you will end up with a crooked wand.  Just a head's up, making knitting needles that are super smooth and uniform is a labor of love.  I make a lot of crochet hooks and have yet to find a way to reliably produce knitting needles.  I think on a small scale, and for personal use, it is totally doable.  Here's a shot of some crochet hooks I'm making from Cherry.  (good on the lathe but probably tough with a froe as it moves quite a bit.)
IMG_8319.JPG
Tereza Okava
gardener

posted 1 year ago
I have both birch and bamboo double-point needles, the birch ones have taken a bit more abuse over the years and not stood up as well as the bamboo. (one notably was gnawed on by a cat, I filed down the messy point but it was never the same)
I have added bamboo skewers to a set of DPNs where I needed a few more, just sanded it down, worked just fine.
I also am from the tradition of making chopsticks and needles from whatever stick happens to be around. I've never had a big variety of wood, just use what I happen to have, but I imagine an orange twig would be nice smelling. Guava is nice and smooth.

@Nicole, what a fabulous idea. I have been at the point of hair sticks for quite a few years now and forgotten about them - using either a chopstick or a pen, which can get problematic. Again, I don't have much access to wood, the only thing I have right now on my property is mulberries, surinam cherries, or my precious baby citrus trees, but sounds like a good reason to go hunting at the park for a sprig of something.
Scott Foster
pollinator
Posts: 888
Location: 6a
269
I like...

Tereza Okava wrote: the only thing I have right now on my property is mulberries, Surinam cherries, or my precious baby citrus trees, but sounds like a good reason to go hunting at the park for a sprig of something.

Tereza,  Mullberry is actually a very nice hardwood that turns golden brown.  Give it a go if you can get a piece.
Tereza Okava
gardener

posted 1 year ago
i had forgotten about the golden business, thanks for reminding me!
I give the pruning trimmings to the rabbits, who kindly take the bark off for me and then I save them to chip a few times a year. I bet I have a few pieces in that pile, will have to go look later!!