What do you grow in your pond?

posted 1 year ago
Next year I'm hoping to finish installing a few ponds. I have read a bit here and there about what people grow in these systems, but I'd like to hear more. What edible plants do you grow in or near your pond? What about crayfish and low maintenance fish? Do you aerate? What trees do you grow nearby, if any?

posted 1 year ago
Just downstream of my seasonal pond I have a large willow patch that I planted a couple years ago. I would like to get some cattails going too plus some edible sedges and some other edible native plants to mix in with the willows.

If I can get the pond to be year round I want to grow wapato (aka Indian potato aka arrow leaf). Great native staple crop with a nice starchy tuber that can easily be used as a potato substitute and does not need to be cooked for hours.

I thought about trying to make my own bog just off from the pond in saturated soil by adding lots of woodchips to the saturated soil. If it worked I thought I could grow cranberries and blueberries just off to the side of it. Not sure if it would work but could be interesting to try.

Basically make some low pH areas with low overall nutrients that would mimic a natural bog and that cranberries and then blueberries might like. Cranberries closer into the "bog" and blueberries a bit further out but hopefully in soil that would still be a bit acidic.

There are also some perennial vegetables that like soil that stays moist. Thought about making some soil mounds near the ponds for these plants so their roots can always find water but not be too wet.

But I'm still in the early phase of making ponds. Though on one of my restoration sites I'm making whole pond complexes and wapato is taking off in those ponds!

posted 1 year ago
Ponds are enormously beneficial to the biodiversity, that's why i dug a small liner pond with steps for growlevels close to my veggie patch. I've got mostly local wild plants, which attract a lot of insects, frogs took residence and hunt for slugs at night. I tried waterspinach, but it didn't grow fast enough, i need a cold hardier version than the one i ordered. I've got arrowheads in this year, (Wapato is that a mix of water-potato?) willow is shading the pond, the overflow goes into the veggie patch where i have a rhubarb and cranberries. Watermint has had prolific times, watercress didn't succeed, i grow penny royal mint close by the pond. Water chestnut works better in hotter places. Still would like to get some acorus sweet flag for it's medicinal properties.
Because my pond is close to my house and i can't stand the noise some frog types make, i got fish. I never feed them except small slugs which i lob in from the veggie patch. They're roach or rudd. Which eat plants but not all year. Be carefull what fish you throw in your ponds, no koi/carb! They eat all your plants and disturb the mud, water pigs. I've not aerated for three years, but when the fish got bigger i noticed them at the surface in the summer in the morning. The big ones died so i needed aeration.
If i'd have different ponds i'd grow different edibles in each of them, let them establish first until they colonize the whole pond, observe and learn, then add other plants and irisses only in the smaller ones. Pond plants can grow voraciously. First get what you want to colonize at least quite a bit then slowly introduce companions. 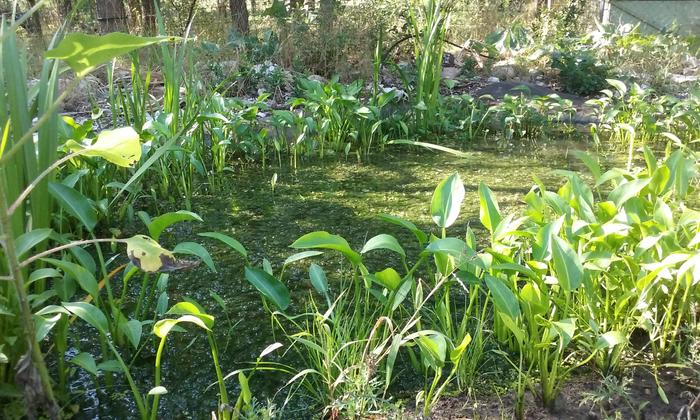 posted 1 year ago
For Ponds I like duckweed, I really just like nitrogen fixers.
Then I like pest control as in mosquitoes control, slug control.
Wind or Solar powered aeration, either direct or battery/grid assisted with a pump/motor.
Maybe light to attract more bugs that get eaten by fishes.
As for edible, water potatoes, water chestnut, water celery, fishes/crustaceans/frogs/ducks, wild rice, arrow root.

You could also do aquaponics elevated growbeds with the pond serving as the water store and nutrient inputs.

Stacy Witscher
pollinator
Posts: 860
Location: Southern Oregon
238
posted 1 year ago
I haven't added any plants to my pond, I'm concerned in changing the environment too much. My pond, although I was told it was seasonal, appears to be year round and contains pond turtles, which are an endangered species here in Oregon. I would be very unhappy if my actions harmed them. There is a second drainage ditch type thing that I would like to develop into a pond, and I'm hoping to have more options with it. Before I discovered the turtles I was looking into plant options and it seems like many can become invasive, and that planting in clay pots submerged is recommended.