Taylor Cleveland
Posts: 100
10
posted 1 year ago
Every year I get these beautiful hardy tomato starts that pop up in my garden from last years fallen tomatoes I’m guessing. There far more beautiful and hardy looking than what I start from seed. So I’m curious, has anyone tried just planting whole tomatoes in the fall? I got my tomatoes in the ground late this year so there just starting to ripen.

I’m thinking about trying one of two ideas. Planting whole tomatoes here in a couple months or direct seeding tomatoes late fall, about when I plant garlic.

Does anyone have experience or ideas on this topic? I’m in Missouri, zone 6. I have permanent beds and I heavy mulch with old hay
Marco Banks
gardener

posted 1 year ago
We don't usually get any frost here where I live, so things sewn in the fall will germinate and continue to grow all through the winter.  Cherry tomatoes volunteer throughout the winter and are some of the first plants the bear in early spring (March or so).  So in that regard, my garden is something of an example of what you suggest.

But if you get frost, I'd think that you'd want to wait until winter to direct sew, when the seeds will lay dormant as they wait for warmer weather.  Thus, if you plan to sew whole tomatoes, you'd need to store them or keep them from going bad until you get the chance to sew them.  My hunch is that that might be a mess as the tomatoes go soft and rotten.

One decent sized tomato will give you a hundred seeds or more.  A bucket of them will give you enough seeds to feed the county.  If you sew a whole tomato, would you get a clump of seedlings sprouting, like a little patch of grass?

For those two reasons (the potential mess of a rotting tomato while you wait till the right time to sew, and the "clumping" variable), it feels to me like the easier thing to do is save the seeds and then sew them more conventionally.  But do some experimentation this fall and see what you get.  Best of luck.

I've entertained similar thoughts.  We're in zone 3, and the greenhouses make it more like zone 4.  Last year we grew tomatoes and plenty of them dropped off into the substrate.  Whether or not they would've grown back I don't know, because I added 6-9" of extra growing medium on top of the old beds.

However I did get 2 volunteers in the greenhouse where we grew tomatoes, as well as half a dozen volunteers in 2 greenhouses we DIDN'T plant tomatoes last year.  And the circumstances are interesting.

So the 2 plants that came in in the first greenhouse didn't actually grow in the beds.  1 grew out of our worm bin (i.e. poop barrel).  Which means it was a consumed seed that hung out in the sewage/worm barrel all winter and managed to grow up through several inches of substrate and obstacles.  I'm actually unsure of how it managed to find a way out but I'm very impressed with it.  It started growing in June and has already caught up production-wise with our plants we started indoors in February.  The second plant is growing out of the grey-water drain line that we use to water the greenhouse with.  So it's a seed that came from the drain line, probably off a plate of food.  It just showed up in July , I have no idea WHERE in/along the drain it started growing, but it's just now setting fruit as well, so it's not far behind.  Note though that this grey water line is not being used this season, so it's not getting flooded by house water.  I don't water either of these survivor plants and they're doing fabulous.

The other 2 greenhouses where we've got volunteers, I'm quite certain the seeds came from animal manure, probably the pigs who get to eat all of our kitchen scrap.  We fertilized all the beds heavily with pig manure.    We even had some puny tomatoes coming up outdoors where the pigs have been.

So, if we want to get into the messy details, I would think that saving turds (from whoever ate the tomatoes, but animals would be ideal of course) and planting them would give the tomatoe seeds their own starting medium and super food to start out with

I intended to do some experiments this year with direct seeding as well.  It's a PAIN starting everything inside in February and having to wait to plant until June.  I love it, but it's a pain.  It gives me peace of mind to know I have all the plants I will need, but it's a pain.  So I want to encourage self seeders wherever possible, since they seem to be doing nearly as well or just as well as the transplant.  I wanted to bury some tomatoes (or maybe tomato slices?) in strategic areas, in pots, in compost heaps, etc, and see who does what.  I'm also witnessing that they have the ability to push up through a LOT of substrate and survive in virtually no light until they reach the surface.  What hardy plants!
Jen Fan
pollinator
Posts: 391
Location: NW Montana, USA
127
I like...

posted 1 year ago
That's really funny that my post got a bad apple rating.  The turd thing was a joke, I thought that was a bit obvious.  But I'd be genuinely curious to know what's misinforming about the post!
William Schlegel
pollinator
Posts: 635
Location: Montana
216
I like...

posted 1 year ago
In a book by Ruth Stout and Richard Clemence:

Richard talks about a strain of Ponderosa tomatoes that never left his garden. He buried several tomatoes by a stake each fall in the hay, then redistributed the seeds along a row in the spring.

In the past few years that I've been direct seeding tomatoes, I also weed around and cherish volunteers.

In my garden, I have yet to find a perfect and reliable volunteer strain. However, spring direct seeding, does work and it works better than volunteers do, at least for me. In fact I know that in my 2018 direct seeded tomato patch that thousands of tomatoes that were still green when the last frost hit, got plowed under and then turned red, which must have seeded my entire 2019 direct seeded dry farmed tomato patch. Volunteers from that though? Mostly in just one small specific area between two rows, so not much.

Amurski tigr volunteered great in 2017. Didn't have a one in 2018. Now I've found a pollen descendant in 2019.  Some strains volunteer great. Others don't seem to make volunteers.

Western Montana gardener and botanist in zone 6a according to 2012 zone update.

posted 1 year ago
I am just a bit north of original poster in Chicago, and get a few volunteer tomatoes every year either from seeds in compost or from fallen fruit.  The winter frost does not seem to matter, even last year's polar vortex.  The only downside I see to overwintering is that the plants get a later start than they would from transplants.  The volunteer plants usually only yield a few tomatoes before cold sets in.  So you would have a later, smaller crop of tomatoes.

posted 1 year ago
I had a cherry tomato patch that lasted about 5 years. Enough dropped to the ground each year that many sprouted.

Most years i got bumper crops in the fall. Nothing before then. I would have hundreds of green ones when the frost came.

The only year i got tomatos early in the season, was when i spread out some compost that had the seeds in it. It was a bin in my garden and i threw garden scraps in it. I didnt water it or add manure, etc do it never got hot.. It was on a warm day when i spread that compost, they sprouted quick and produced as quickly as my transplants.

Mk Neal wrote:I am just a bit north of original poster in Chicago, and get a few volunteer tomatoes every year either from seeds in compost or from fallen fruit.  The winter frost does not seem to matter, even last year's polar vortex.  The only downside I see to overwintering is that the plants get a later start than they would from transplants.  The volunteer plants usually only yield a few tomatoes before cold sets in.  So you would have a later, smaller crop of tomatoes.

Western Montana gardener and botanist in zone 6a according to 2012 zone update.

mikkel starke
Posts: 5
posted 1 year ago
I have a tomato that I seed every autumn since 3 or 4 season. It is not the best one but my first volunteer. So i keep it. It is very early in germination and bloom but ripening is longer than usual. First bloom on 1st of May but first ripe fruit only at the end of August.... This year a different more vigorous type showed up . Will see how this strain will develope over time. Usually I smash the fruit to spread the seeds but even whole tomatoes that drop on the ground germinate as a bunch of seedlings every spring.
A few will outgrow the others and become mature plants. As it is a selfpollinating type it couldn`t suspect true evolution, only within selection what is is given to this line. Would be nice if it could becomes an outcrosser.

I started at least autumn seeding with 2 other lines. One is my Late Blight tolerant strain. The other one is the only tasty grocery store variety I know. It is within it is F3 now and is very sweet this year after being a very bland type last season. LB strain is very late but healthy. Leaves are still dark green and show nearly no infection with other diseases. I like it.
There nearly no LB pressure this season. 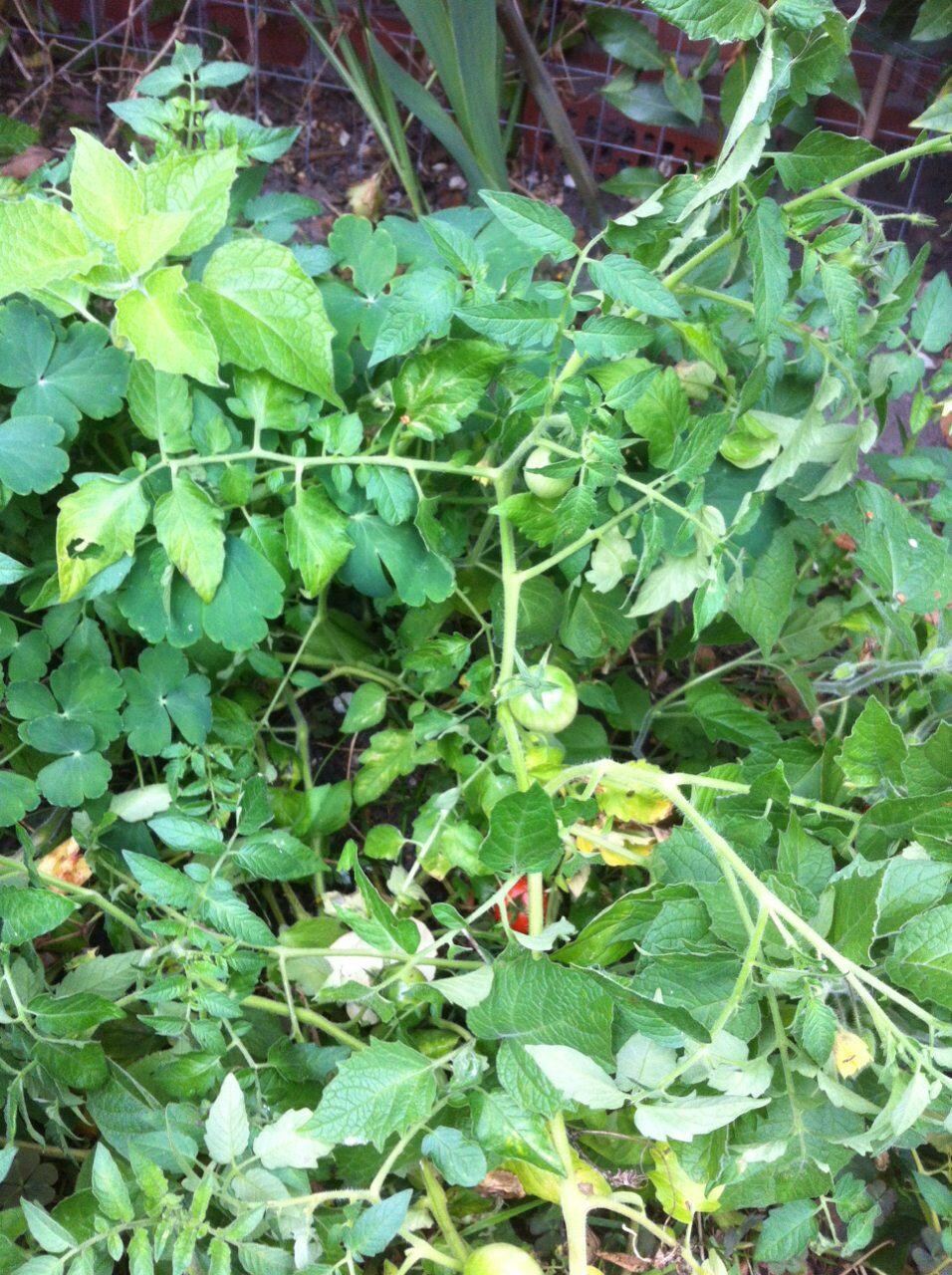 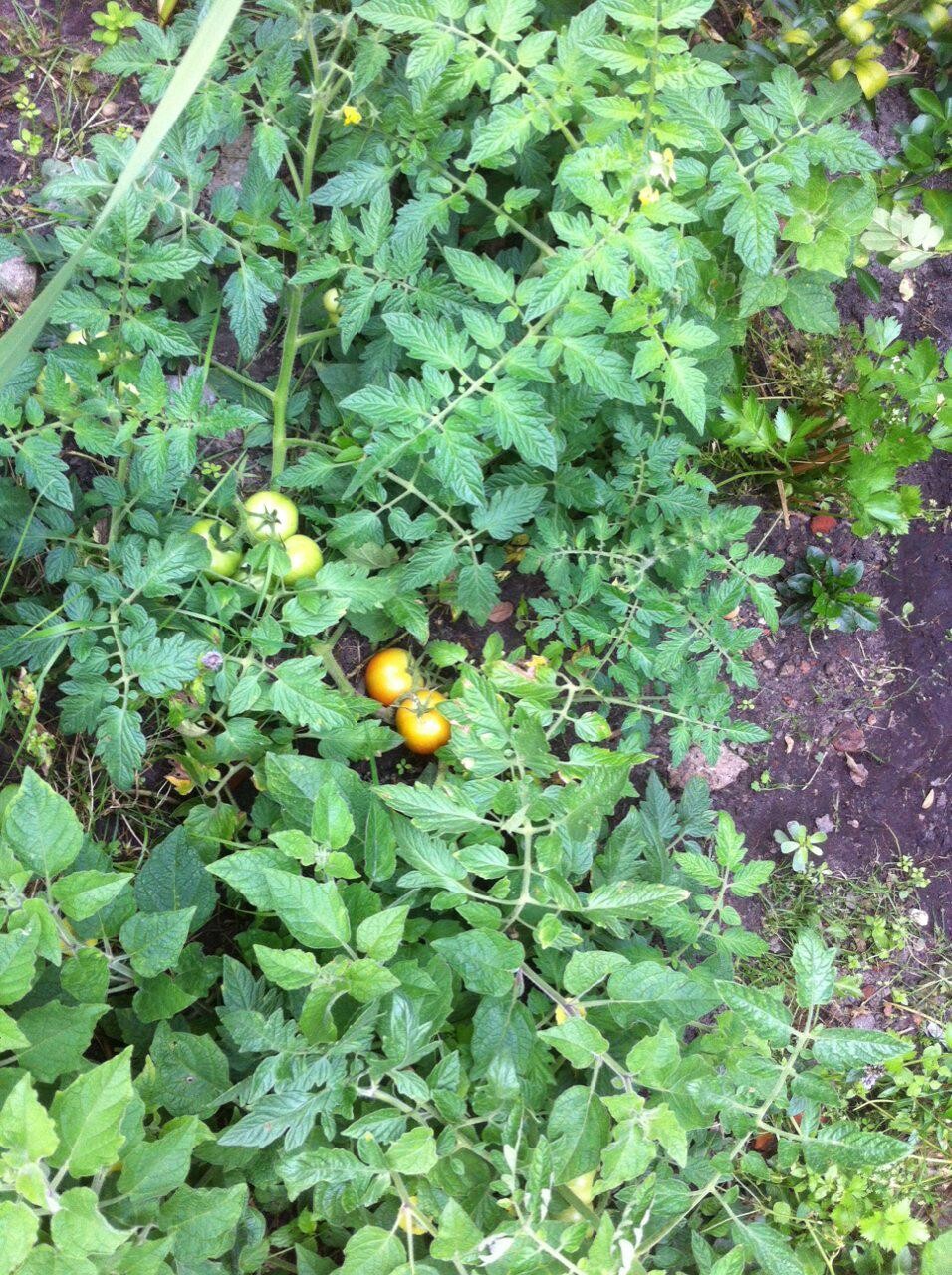