Jon Terry
Posts: 29
Location: Western WA
1
posted 1 year ago
Hi everybody, I made some changes to the bell chamber as per suggested here. I raised the ceiling of the chamber a couple inches, it's now 4.5" to 6" from the corrugations to the top of the mass storage area. So, I've gained height in the chamber to trap hot gasses, but I've lost a bit in heat storage in the mass on top in the exchange.
I've also added some brick pillars to the inside of the chambers, I was able to poke a layer of bricks up into the raised corrugation.
Did I go too far with all those pillars? I packed as many as possible in there in order to make up for the loss of mass above, I'd be happy to remove some if you guys think it's too many.
Another question I have is- I have dozens of corrugated steel panels, they're 1/8" thick and heavy. I could stack those right up to the top of the mass storage area, even leave them exposed rather than covering them with sand/clay/rock.
Would there be any concerns doing that? In your opinion, is there much difference in mass or heat storage capacity? Will the steel release the heat faster? I worry that it might get hotter than the clay/sand/rock cob. Should I maybe not stack them so high and cover them up with a layer of cob?
I really like the idea of being able to reuse the steel panels this way, even though it means burning all that paint off them first.
Once again, many thanks for your attention and input! Hope you can make sense out of the pics.
r2-1.JPG 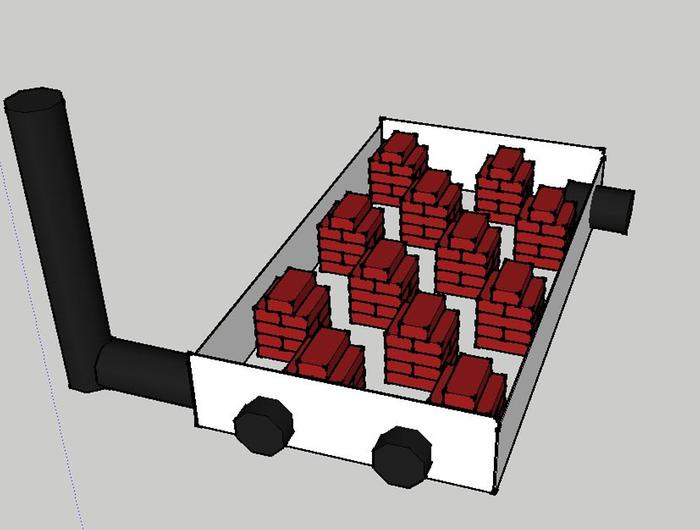 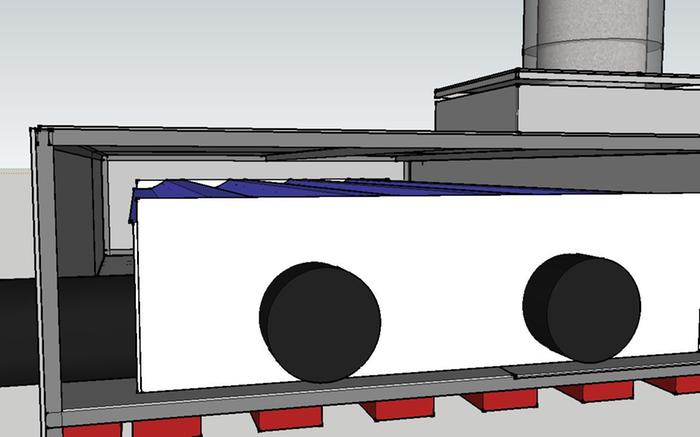 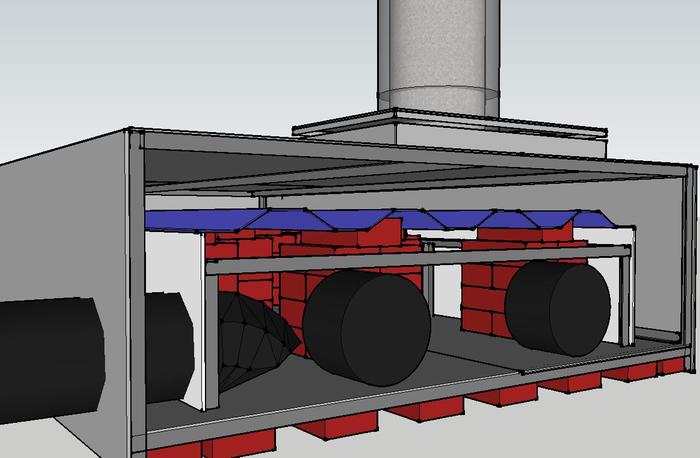 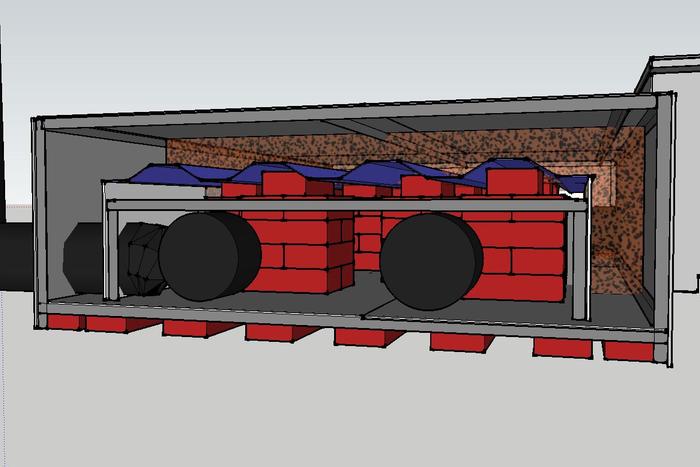 Posts: 3236
Location: Southern alps, on the French side of the french /italian border 5000ft elevation
153
posted 1 year ago
What is your system type and size? And what is the  good ISA (internal surface area)  for such a system?

Jon Terry
Posts: 29
Location: Western WA
1
posted 1 year ago
Hello, thanks you for your reply. It's an 8" J-Tube.
According to Glen: "Peter van den Berg's batch rocket sizing calls for a 6" batch box to have about 57 square feet of internal bell surface (an 8" J-tube seems to have similar capacity as a 6" batch box). I would estimate that you have around 40 square feet of internal bell surface (the floor doesn't count). Pillars would help."
I wasn't sure about calculating surface area on my pillars, I was also told to add as many pillars as I could without restricting air flow, and I wasn't sure if the two suggestions were at odds with one another.
I'm also worried that I raised the internal height of the bell chamber too much, as Glenn said: "Keeping the mass about 8" thick is probably a good balance between storage and radiation"
It's now 6" at the thickest point and 4.5" at the thinnest, depending on which rib of the corrugation it's measured from.
Should I lower it back down?
Glenn Herbert? You still around?

Posts: 3236
Location: Southern alps, on the French side of the french /italian border 5000ft elevation
153
posted 1 year ago
Jon, do the calculation, each pillar is the same, so that should pretty easy.

Each face should be taken into account. Xept the floor. As you said.

I have 8 inch thick mass. And it's all right, but heat takes time to travel through it. I don't get any heat coming through for may be two hours after the beginning of the burn.

With your pillar placement, i see two other problems, cleaning. It would be better to have a line of sight from the cleanouts to the opposite wall. And volume.

I mean, for the heat exchange to happen, you need time, surface, and volume. Because if you don't have the volume, you won't have enough time to exchange heat through the surfaces  subjected to heat.  Gases will escape the bell too fast.

Remember too, that your system is not ideal. Tall bells are far better. Since there is stratification into those. And way less of the height is occupied by the exhaust side to the chimney.

Jon Terry
Posts: 29
Location: Western WA
1
posted 1 year ago
OK! thanks for clearing that up, according to the calculations, each pillar being either 2.7 or 3.4 sq ft, I only need 5 of the taller ones or six of the shorter ones to bring me up to 57 sq ft.
Do you think having only 4.5"- 6" of mass on top of the chamber is too little?
And I'm still wondering about the steel panels. Current thinking on that is I can stack up a couple inches of them and top that off with the cob mix...but I really do love the idea of using more of them to recycle, and I could bring those right up to the top of the mass and leave off the top layer of hardie board I'd planned to top the mass off with. But then I wonder if it'll get too hot...
(There's a steel frame that sits on the mass that allows for an air gap between the mass and the platform above)
r3-1.JPG 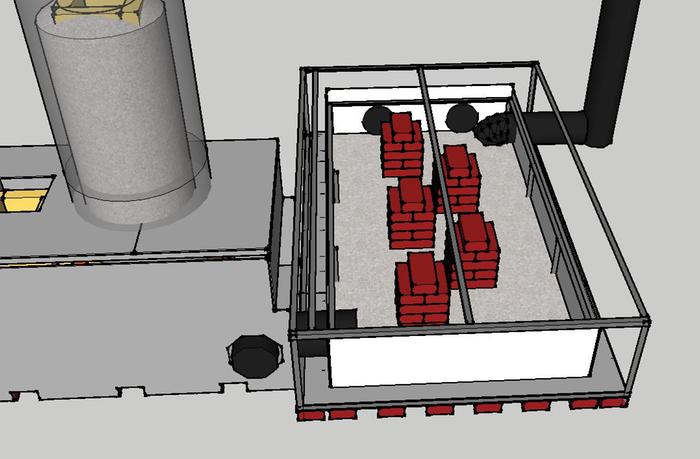 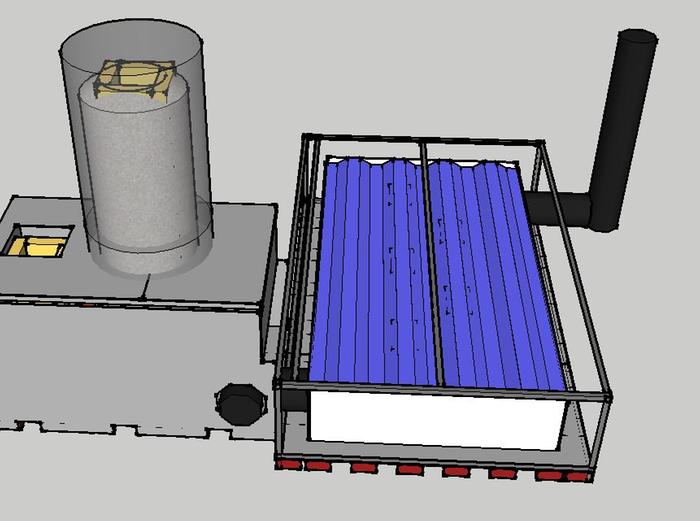 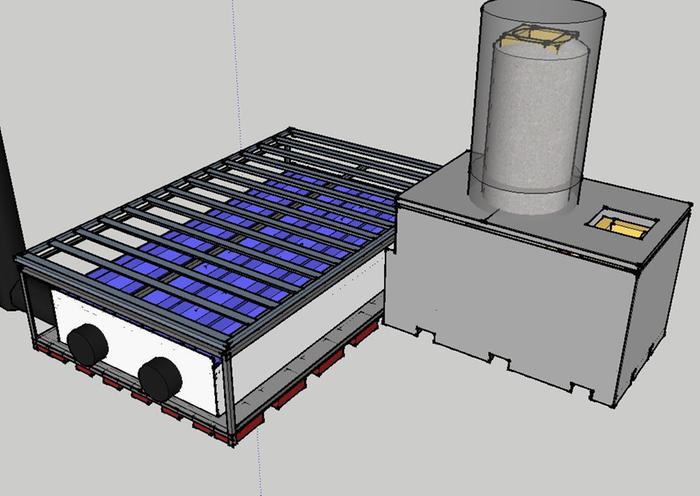 Posts: 3236
Location: Southern alps, on the French side of the french /italian border 5000ft elevation
153
posted 1 year ago
I would put 8 to 12 of mass on top, if it's intended to be a lounging place.

Jon Terry
Posts: 29
Location: Western WA
1
posted 1 year ago
Thanks for getting back to me so quickly!
Unfortunately, I have a window sill that limits how high I can go and I'm at the limit now.
If that's the case, then I'd better lower the chamber height back down a couple inches and add another pillar...
Any thoughts on the steel vs cob question?
Much appreciated!

Posts: 3236
Location: Southern alps, on the French side of the french /italian border 5000ft elevation
153
posted 1 year ago
Don't use too much steel, as it releases heat faster than cob. May be 2 inches of steel if you want, and six inches of cob stones lasagna.

Jon Terry
Posts: 29
Location: Western WA
1
posted 1 year ago
Excellent, yes, those were my concerns and feelings there, too.
I tend to go overboard, thanks for pulling me back in.
Here are some more pics, I lowered the chamber ceiling and added another, shortened, pillar.
I've altered the elbow on the pipe leading out of the chamber so it draws from close to the floor, not sure if that's clear from the pics. 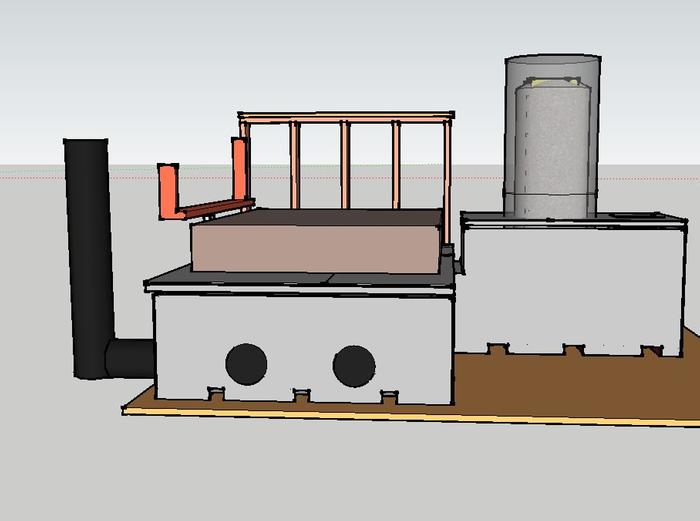 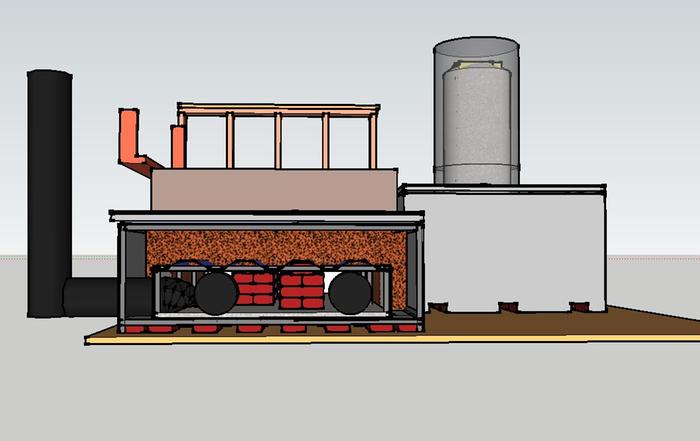 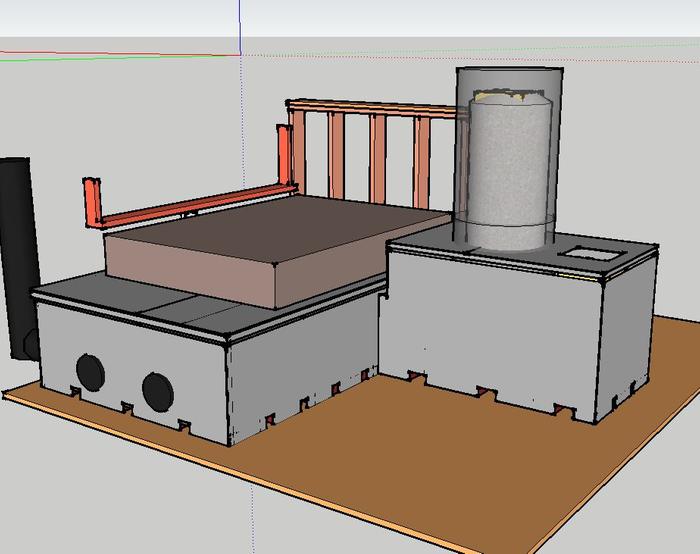 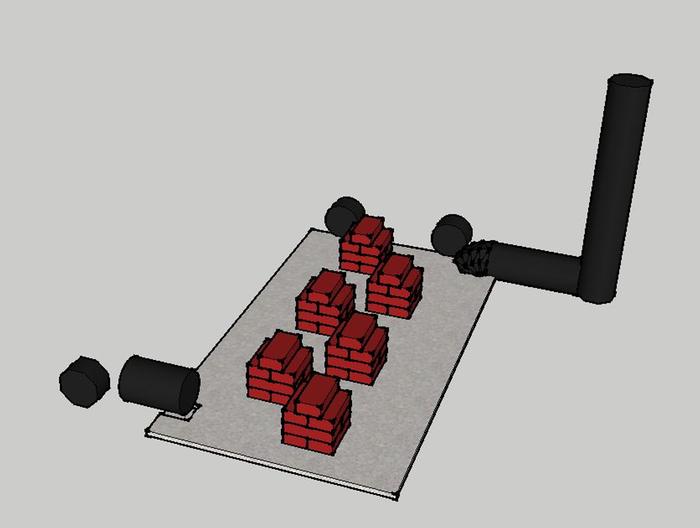