posted 1 year ago
The opinions on broadforks seem to be very divided, some people use them as an essential part of their gardening, others say they are overrated.

I think these opinions have a lot to do with the soil they're working with, and if there are any back problems to consider. I imagine that very stony soil would be tricky to use a broadfork with. For people who can use normal short-handled tools without back damage, they probably can't imagine just how good it is for someone that can't use normal forks to have a tool they can use without pain.

I like mine a lot. I chose a very strong one which looks similar to the Meadow Creature but is made closer to where I live. One day, I might get a 7 tine one for quickly working established beds, but for now I am working with compacted soil, and a smaller 5 tine broadfork is great for that.

I use mine for opening up my heavy and compacted soil to help roots go down, for loosening soil before digging a hole, and I can use it as a small-scale chisel plough to improve pasture and perennial plantings. It is an essential part of the way I homestead on this land.

What are your thoughts on broadforks? Do you use one? What do you use it for?

posted 1 year ago
I love mine.  Lately I have been using it to aerate my dad's lawn.

posted 1 year ago
we use ours for, digging in general, we dig our root vegetables with them. We have 3 tine forks and some 5 tine forks. The 3 we use mostly in the garden to either turn soil over or to dig root vegetables out. The 5 tine one we use mostly for turning compost, cleaning the goat pens, shovelling sawdust/woodchips.


I would use a normal shovel for digging a hole for a tree, or to excavate a drain. somewhere where i need to move soil out of the spot i am digging in.

Devin Lavign
pollinator
Posts: 1047
Location: Pac Northwest, east of the Cascades
284
I like...

posted 1 year ago
I don't have one personally, like scythe it is just for folks with different soil and terrain.

However I love the idea. Both broadfork and scythe and great tools for the area they are usefully in.

posted 1 year ago
I've had one for a couple of years and my experience has been mixed. It's been great for renovating existing beds that I haven't dug since forming them (and don't want to dig again, because I'm a no-dig kind of guy). But our land is rocky, a former river channel, with varying sizes of stones from gravel to 30 cm boulders at a range of depths from the surface to over 1m down. If one of the tines hits a decent-sized rock, it usually bends, and even if it doesn't it means that section won't get broken up effectively. I might weld some gusset plates into the curved part of the tines to stiffen them and see if this helps, or I may sell it on to someone with easier soils and get a model with stiffer tines.
Tyler Ludens
pollinator
Posts: 11804
Location: Central Texas USA Latitude 30 Zone 8
1057
I like...

posted 1 year ago
Mine also bent in our rocky soil.  If I ever get another, I will probably get a Meadow Creature, which seems to have reinforced, blade-like tines.

posted 1 year ago
This is the kind that I use. Probably only available in Australia, but I can recommend it: https://www.fdryan.com/store/p69/broadfork.html 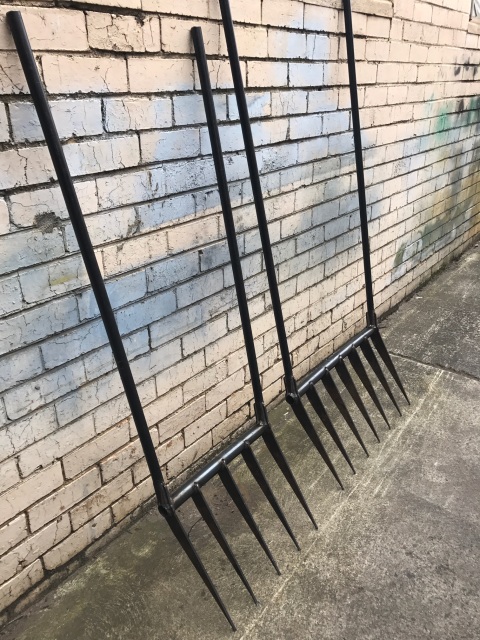 posted 1 year ago
That looks like it could actually be fun - if not for my land being almost entirely one, big rock. I think a smaller version might do better for me - is there such a thing?

I wonder if this one would work for you on any not-so-rocky bits Carla? It has shorter tines and width than the one I use: https://meadowcreature.com/collections/frontpage/products/peoples-broadfork-12 posted 1 year ago
Ooooooo! Definite possibilities, there!! Thank you!

I have not purchased one yet but am trying to make up my mind which size to get...

This is the one I use from Jonny Seeds. I've used it mostly on established beds but I also used it to reseed a freshly created berm. I love it for prepping beds for root veggies!

posted 1 year ago
I love my Meadow Creature! We don't have rocks, but we do have roots that may as well be! I can use the broadfork to pull them up closer to the surface to get cut with a pruner or the grub hoe so they can get pulled out in pieces. Before the Creature we had to prep new planting areas with a pickaxe! This is much easier...and more fun

Pete Matting
Posts: 4
Location: Gig Harbor, United States
posted 7 months ago
I love my Meadow Creature broad fork too! I use it to break up beds before planting, and for ripping apart sod in fields when planting trees.  If I could go back in time, this would be one of my first purchases.
Nick Neufeld
Posts: 54
Location: North Thomas Lake, Manitoba
3
I like...

posted 7 months ago
I watched a Charles Dowding video where he did a casual comparison of a no dig bed vs one that had been broadforked and the no dig bed won. His guess was that forking damages soil fungi.
Emily Rude
Posts: 10
Location: Central Kansas
1
I like...

posted 7 months ago
My garden has clay soil so heavy that it's busted BOTH rototillers we've borrowed from our long-suffering neighbors. Now, the first step in my bed prep is using a spading fork in the same manner as a broadfork. If I don't, germination suffers. After forking I pull weeds, which helps break up big clods. After planting I mulch generously with young, juicy mown/pulled weeds.

I dream of a lovely broad broadfork with easier lever action that would make bed prep faster than my narrow fork. I also dream of the day when my soil has better tilth. I'm amping up the cover cropping, mulching like a madman, and limiting "invasive tool use" to the fork. But if I don't do ANY forking, the soil behaves like actual concrete.

Ralph Sluder
Posts: 28
2
posted 7 months ago
I have the same problem with concrete. Tillers don't stand a chance. Meadow creature broadfork loosend it up till summer rains packed it back down. My main kitchen garden took 3 years to be able to properly grow good veg.  I had to add about 2 ft. of hay every fall to rot down, added 1000s of earthworms and grew lots of dikon radish's and left to rot in ground.  ( those things really drill through hard-pan and clay).  Finally I can dig down 8-10 inches with my hands alone. Its been many years. Still add a foot or two of hay to rot down every fall. just part the hay where I want rows,shove broadfork deep down and wiggle it, add a little compost on top for seeds, or just set starts in the earth. Years of rotting hay has made the difference.
Emily Rude
Posts: 10
Location: Central Kansas
1
I like...

posted 7 months ago
I haven't tried the daikons or oilseed radish yet. Thanks for the reminder.

How long do the roots generally take to break down? And do you think it would make a good cattle forage while still benefiting soil? I have two dairy Dexters that might enjoy the variety.

posted 7 months ago
I haven't gone in in buying a broad fork because rocks are my main soil issue.
I have tried torpedo radishes, to no avail.
They're great,  but they can't break up rocks,  go figure.
I find their leaves and seedpods to be tasty,  but the big roots are just too darn hot, even after slow roasting.
The Dexter cows might not mind the heat.

Ralph Sluder
Posts: 28
2
posted 7 months ago
our wet winters causes them to rot fairly quick, say  before starting other plants in spring..  I do sow them very thick.   I like the taste of them and so do my animals, just so many radish you can use though.
Seed is cheap.  Others in my area have hauled in soil, built raised beds etc....I just took the slow route.  I have many seperate garden beds where I just built yearly compost piles. started new piles elsewhere the following year and piled on 6-8 inches of fresh cow manure for another year then planted there.  Soil probably hard under there but i don't disturb soil, just grow stuff. guess I got more time than money.
Matt Mill
Posts: 52
Location: Reeds Spring, MO; zone 6b Ozarks
18
I like...

posted 5 months ago
I'm going to put in a word for broadforks, even on a rocky terrain. We have rocky soil—we're not just in the Ozarks, but on a ridge, so we're up where a lot of the topsoil has washed away and left ground that's absolutely full of limestone. Then it has been badly compacted by the builders who put in our home.

We decided to buy a broadfork because I couldn't see using a tiller on such rocky soil—I think the common garden ones would bounce right off. And we're not working at a scale large enough to get in a tractor on our half-acre suburbanish lot. So we bought the Meadow Creature broadfork, and it has held up for two years to a lot of abuse. I have used it to pry up limestone, to pull down some rotting timber retaining walls, and to dig up the "stumps" of the ornamental grasses we had planted all over the property. It hasn't shown any damage. I'm sure we would have broken one of the less robust ones by now.

Of course, using it on our soils is no joke. I often have to jump up and down on it or angle it in different directions to get it in, and on the first year with a bed I can't usually work more than the top 3-4 inches of soil. On the other hand, it's not so strenuous that my wife (who's a very small person) can't use it, and in our second year broadforking our garden beds was much less difficult. We did pull a lot of rock out of the ground by hand each time, and I suspect that is going to be an annual chore.

So I'd say don't give up on (heavy-duty) broadforks if you have rocky ground. For our small-scale garden, I don't think there's a better tool for the job.

A Habitation: essays on permaculture and faith