Why do you preserve the foods you harvest? Here are some current reasons why I do.

posted 2 months ago
I've always been something of a preparedness nut and my concerns for being squared away in the not too distant future only seem more justified after studying climatic changes due to Solar activity, Space weather and current and predicted harvest forecast models. I am also reading usda reports, global farm and harvest reports, and as an example: America is the largest grower and exporter of corn in the world. Brazil being the second. America just ordered 200,000 metric tons of corn to be delivered from Argentina this year. They are currently experiencing droughts. Brazil is in a record drought right now and facing record supply shortages. A lot of the corn, soy and wheat, either wasn't planted in time, got flooded or froze in the fields. I believe this years harvest was 35%-55% of normal yields.. Canada just had millions of acres of canola freeze in their fields, There's a shortage of olives and olive oil due to major droughts in the Mediterranean. There's currently a global shortage of horseradish. Many soda and other companies are actually removing sugar from their products altogether and replacing it with Asperteme. The sugar beet crops were a near total loss this year from flooding, as well as much of the sugarcane in the southern US froze. There has been many reports on shortages of seed potatoes due to flooding and freezes. Australia is in severe drought. Smithfield is the largest pork producer in America and are now a Chinese owned company. 98% of the pork raised by Smithfield is being sent to China due to the African swine flu that decimated billions of pigs. The flu has now been reported to be in Africa and Indonesia. China is in a big push to buy up all the available soy bean futures this year as well. Also the loss of many of America's cow herds due to flooding and Austrailia has been slaughtering many of their herds because there isn't any water to give them. I've read reports that some ranches are even killing off the breeding stock. Many farms are disappearing en masse in Europe on a daily basis due to regulation and weather conditions. The forecasted harvests for 2020 grain crops is also looking bleak and being less than 2019. There has been a big push to get people open to the idea on eating insects now as well. My point is, While there is still some plenty and prices aren't terribly high, stock up and put something aside for later. You pay for insurance don't you?
Eyes Open, No Fear 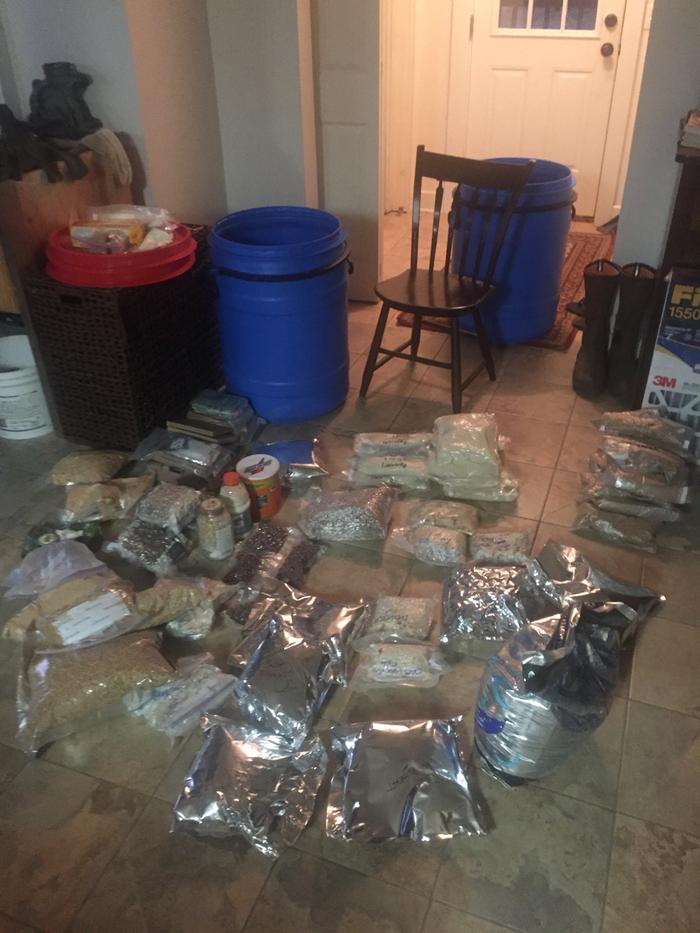 posted 2 months ago
General doom & gloom reports don't affect me much anymore. I've read them since I was a young person. I had friends who stored hundreds of pounds of wheat in their attics (it went rancid and uneaten). I saw other friends overstock their pantries to the point that they had 5-10 years worth of food in there. Metal cans corroded through. Packaged goods went bad. Most of the food was uneaten. I had a friend who stockpiled army rations he bought from the military surplus-- stock from World War 2. I can't imagine that he any of that crap.

I try to be a realist. I try not to go overboard. So I now grow much of my own food and don't stockpile much more than I need to see me through to the next crop harvest. Since I opted to live in the tropics, I can grow most foods year around. But I do have seasonal items that I store.

So why do I preserve food? Simple......to last until the next harvest.

Why don't I stockpile? Overstocked food will go bad or not get eaten. Waste doesn't sit well with me. And besides, I've read doom & gloom reports for over 50 years. The fear issue loses its affect over the years, especially when the forecast disasters never materialize. Oh, I do believe in being prepared. But I don't get crazy over it.

Will food shortages occur? Of course, considering our species is insanely over populating this planet and won't stop producing more children. More people = more resources needed, including food. Will food prices go up? Of course, because it's the principle of supply & demand. My own solution is to become as food independent as feasible.

the main reason i preserve food from my gardens is so that I can enjoy all the fruits of the labor that went into growing them..

......no preservation means spoiled loss and I surely didn't do all that planting, watering, weeding and harvesting just because I was bored.....I did all those things because I wanted to know how pure my food is, to know what it takes gardening wise to feed me for  a year.


so when I have a functioning food forest and I preserve the food from it, I'll be prepped for a major disaster by pure accident (unless of course the disaster itself wipes out my food store or I fail to defend myself from muarading raiders).

nothing wrong with the concept of prepping, just so much more to gain from permies.com in addition to being prepared

energy devices in a tiny space:twobirdstone.blogspot.com
Respect your superiors...if you have any. Mark Twain

posted 2 months ago
There are some religious traditions that encourage keeping a years worth of food in the house.
Keeping it up to date is part of that practice.
This seems like a good idea just to prepare for small d disasters, like loosing a job.

I find that buying in bulk means I have month or more of food in the house.
This has paid off more than once.
It's like having a savings account dedicated to food.
Because it already is food, it can't be squandered on impulse.
To me,  if I was worried for real,  I would buy beans, rice and oil, plus dried spices.
I pretty much do this now.

Bonus,  beans are also seeds.
I would like to eat barley instead of rice,  for this reason and for reasons if health,  but it's harder to come by.

posted 2 months ago
The year before last (2018) the onion harvest in Northern Europe was down 35% so was grain. you would never have noticed in the shops, I'm really not worried about us "rich" countries running out of food. I do preserve a fair amount but that is because I prefer my own pickles and it saves money. I do enough for around 18 months. I do not want to be eating preserved food when there is fresh available.
S Bengi
pollinator
Posts: 2721
Location: Massachusetts, Zone:6/7, AHS:4, Rainfall:48in even Soil:SandyLoam pH6 Flat
218
I like...

posted 2 months ago
A big part of food preservation is about investing "abundant" current resources for a more steady/secure food supply in the future. Yes I could preserve a few peaches with my extra energy and money and get food to eat in two months or I can plant that same peach and then eat hundreds of peaches decades after decade if that isn't securing food for later I don't know what is.

Now from a survival cache standpoint, sugar+oil+bean/protein+multivitamin tablets, will cover ones needs, and it isn't too hard to stockpile enough for a year. From a regular budgeting perspective I like to be a month ahead on all my expenses so I usually have a months supply of stuff. Sadly I dont grow enough meats/nuts to save/preserve any. The same goes for my fruits and vegetables and species. I do ferment my food from time to time but it is just cooking/food prep/flavor/health reason not for months/years storage reasons.

Stacy Witscher
pollinator
Posts: 785
Location: Southern Oregon
174
posted 2 months ago
My goal is to eat mostly what I grow, raise, etc. Preserving food helps with that goal. I have stepped back from fruit preservation, as it isn't particularly healthy for me, too much sugar, whether natural or added. But yearly harvests of meat, and seasonal vegetables, and herbs require preservation to make it to the next season.

I'm not a prepper, I'm not afraid to die, but I don't want to suffer or have my loved ones suffer, so I plan.