I need your help regarding building a battery bank especially to maintain clinic and frozen goods, assumption, two days of autonomy during maintenance of power stations and or necessary shutdowns during thunderstorms. Need to build a battery bank. What capacity should the battery bank be? How many 12V batteries would I need?

Many thanks,
Jamie
Eric Hanson
gardener

Good that you are planning on building one of these systems.  Given your description, I am pretty certain that a 3kw system will be sufficient.  Did you get this figure by adding up the power consumption of all the devices that you plan to run?  If so, great, even better if you plan to build in a little reserve.

You can find battery inverters that can easily bump your 12v dc output to 120v ac,  ignoring losses, by pumping your voltage up to 120v, your amperage will drop to 25 amps.  Again, this is perfectly possible and the components are certainly easy to acquire.

But now the elephant in the room

What you have not told me is how long you want the battery bank to last.  Is this for 1 hour, 10 hours, 10 days?  I don’t know what exactly you need but I will run a couple of specs past you.

I am looking at building a “solar generator”, which is essentially a battery bank and hardware mounted in a case and charged by solar panels.  The build I am looking at is similar in basic respects to your needs.  It is based on a 3kw inverter, so it has 3Kw output.  The build I saw was powered by a 50 amp-hour 12v battery.  The amp-hour (ah) is a measure of how long your battery will run on 1 amp of current output.  The basic equation is similar to what we had above.

After converting to 120v a/c and ignoring losses, it looks like:

We get the same output because our increase in voltage is checked by a proportional loss in amperage.

Now I personally think that any battery build of this sort should be based on a 100AH battery at least, so one 100AH battery should double the run times listed above, 2 batteries should quadruple, and so on.  I don’t know what your power load looks like or how long you need to run so I cannot give you exact numbers, but I will start with a build based on 2 100AH batteries.

Another factor that needs consideration is the exact battery chemistry.  Don’t use car batteries as those are designed for huge amp output for s very short period of time—exactly what you don’t want.
The next (and cheapest) option would be a Sealed Lead Acid (SLA) battery.  These are not too expensive as batteries go, but come with the hitch that they should avoid discharging over about 50% or the battery itself can be damaged and not charge properly again.  This means that whatever the AH rating of the battery, cut it in half.  The next cheapest (and in my opinion a good option) is the Advanced Glass Mat (AGM) deep cycle batteries.  These can be discharged all the way to zero without harming the battery.  Another option is Lithium Iron Phosphate which can be recharged a great many times.  Avoid Lithium Ion batteries as they can only be recharged a limited number of times and confer no real advantage unless the battery pack needs to be portable.  If it were me, I would go with the AGM battery because it is a reliable, mature technology.

Unfortunately I can’t go much further than this because I don’t know the run-time you need.  If you can give a more specific run-time, we can talk more.

Batteries don't like to be completely emptied out. In fact they prefer a discharge of just 50%. But seeing as how this batter buffer would presumable only be used twice a year, its okay to ignore this fact otherwise you would need 2 times the amount of batteries listed above

All of the number given above is for a 60KWH per day system. Maybe it was a typo but I notice that you mention a 600KWH system vs just a 60KWH system. With 600 being 10 times more than 60. You would need 10 times more battery for such a setup so 1,000 batteries vs just 100 batteries.


And yes the battery will need a charger once it is depleted. And also an inverter to extract the current in times of need.
The next question is how much power will you draw from this setup, may just a 3000W inverter/charger or maybe you need a 10,000W system

Daniel Richardson
Posts: 49
8
posted 6 months ago
I'm navigating this area myself and learning all I can. One chart that surprised me was the cycle life vs. depth of discharge. With battery technology progressing so fast, I'm really left scratching my head on what type to use for my house. Lead-acid can last a really long time(a lifetime) if you have enough of them to keep the depth of discharge very low. With the amount of researching happening though, I'm guessing some miracle battery technology will present itself in 10 years or so that will blow the rest out of the water. 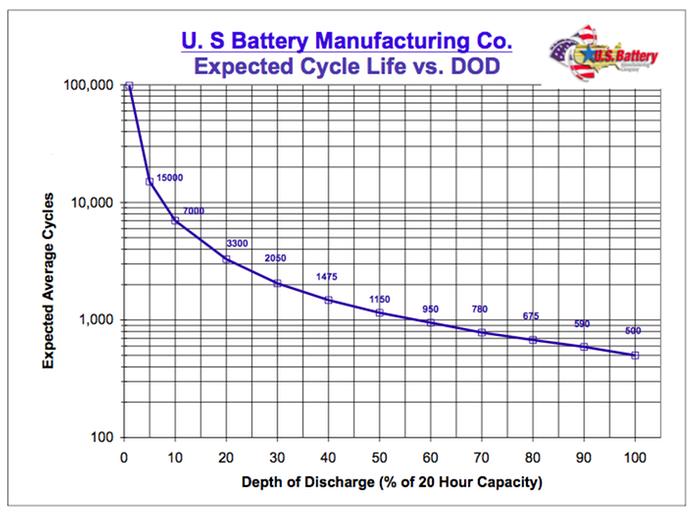 posted 6 months ago
Hi Jamie;
Welcome to Permies!
I'll let the others help you size your battery bank.
I just have 2 suggestions.
2 volt battery's wired as 12 volt will give you the reserve during power shut downs.
Using solar to help maintain those large battery's is a good idea.

Jeremy Baker
pollinator
Posts: 379
Location: Nomadic
32
posted 6 months ago
When you figure out how to run a school, clinic, 60 households and 4 villages on a 3 KW system I’ll be the first to write a letter recommending you for the Nobel peace prize. Perhaps you could run LED lights and that’s all in my guesstimating.
What batteries are available where you are is the first question that comes to my mind. Do you get supplies for Australia primarily?
jamie auto
Posts: 2
Location: Nausori, Fiji
posted 6 months ago
Hi all, Many thanks for your replies am learning a lot from them. Eric I was thinking to allow two days of autonomy but from Bengi's calculations quite impractical really. The households will have low wattage lighting and the refrigeration for clinic vaccines is at 3kWh/day and the fishing village operates at 400kWh/day, total usage estimates 700kWh/day noting Jeremy's judgment that this is just an impossibility with a 3kW pico hydro! The Australian scene is just too expensive for islanders so we source from China!
Eric Hanson
gardener

One possibility that might work for you and still use batteries is to load shift.  For instance, I doubt that the refrigerators/freezers really need to run full time.  I know from experience that fridge/freezers can have power shut off for hours and have no appreciable change in temperatures, assuming the door stays shut.  Also, there are other ways of getting lighting and computers don't necessarily run full time.  Taking these steps can drastically lower your actual power needs--as in an order of magnitude or more, so I would not give up on batteries just yet, but you will likely need to re-examine exactly what your  priorities are and how to overall lower your electrical needs.

The second thought is that for the time you are talking about, a simple inverter generator might work perfectly well for you needs, and they really sip the fuel.

Just some more food for thought,