posted 10 months ago
It's that time of year again time to make Elderflower cordial, we have here around 2 weeks from now to make enough to last the year.

* lightly compacted not rammed in but not all fluff either
** This is added to this recipe as these bottles are for sale and need to have a good shelf life un-refridgerated once opened, In Denmark no one boils jars they all add this stuff, as it stops working if it is heated over 90C you cannot boil any jar/bottle with it added. For home use just leave it out and waterbath the bottles instead, after opening keep in the fridge and use within a week.

First you need to collect your elderflowers, wear long boots and thick trousers as elder likes to grow with nettles, thistles and goosegrass. And when those three get together they make a pretty impenetrable barrier. Only pick flowers that you know have not been sprayed and don't gather any near busy roads. Elder grows many places, you can find good crops on brownfield sites in town as well as down country lanes. I pick the flowers from my harder to get to bushes and never from the ones next to my berry bushes, as hopefully the berries will act as a decoy so I get some currants.. it's not worked yet but I live in hope. Don't worry about picking all the flowers, they don't all open at the same time so unless you are really dedicated you won't strip the bush. You want to pick flowers that are newly opened and don't contain any brown gone over flowers.

After getting your flowers home, put the water on to boil in a large stainless steel saucepan, if you only have aluminum you can use that but you will need a bowl large enough to hold water and flowers while they steep. While that comes up to the boil pull off as much of the stem off each flower as you can and remove any insects, leaves other objects while you are at it. do not wash the flowers it will remove much of the pollen and sent from them.

Add the citric acid and lemon juice to the water and stir until dissolved, once it is clear again take it off the heat (if using a reactive saucepan transfer to your bowl now) put all the flowers in and push them under the surface of the water. leave them there for a maximum of 3 hours 2 is better.

After they have steeped strain off the flowers with a sieve, you will have some yellow cloudy liquid probably with an occasion flower and thrip left over. the cloudiness is mainly pollen to get rid of it use a jelly bag if you have one, or if not line a sieve or collender with a double layer of kitchen towel and strain the liquid through that, now you should have a nice clear liquid.

Sterilise your bottles and lids and clear enough space to fill them, a funnel helps here. Put the liquid back into the cleaned saucepan and add the sugar, bring to the boil and boil for around 5 minutes with a lid on if possible. pour into the bottles while still boiling, if you are adding E211 check that the bottles are under 90C before adding it, if not then close and process straight away.

This will keep unopened for over a year, opened depends on the method you chose at the end.

And a little picture from a couple of years ago, the cordial here is rhubarb elderflower is clear when bottled. 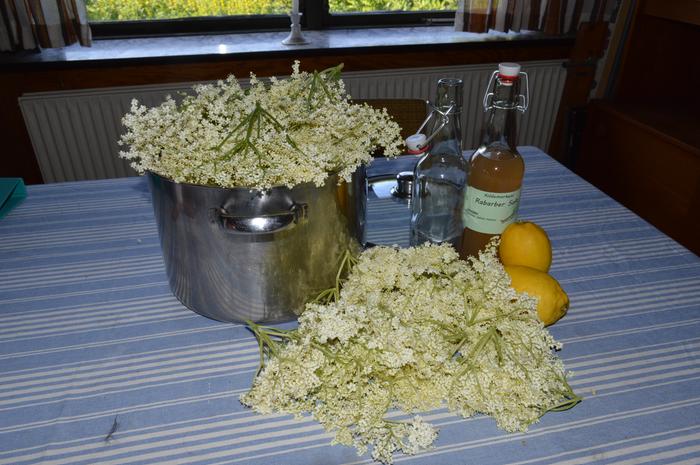