Is it Pokeweed, and should I be worried?

My wife and I started a little garden (attached, slightly old picture).  There are two hugelkultures, one terrace which is largely clayish soil.  The mound in the back is a two-year-old stump pile from when the house was built, so I guess you'd say it's a naturally occurring hugelkultur.

We've planted a peach and plum tree in the terrace.  A few weeks later, a leafy plant we didn't recognize started sprouting up en masse under the trees.  I couldn't ID it at first, but after some research I believe it's American Pokeweed.  I attached a pic I took today.

I live in Southern Maine, and I don't think I have ever seen this plant before.  I have no idea where it came from, but it is growing like crazy in the clay bed around the trees.  Lots of mixed info on if it's an invasive pest or something desirable - some love it, some hate it, some eat it.

Am I right that it's Pokeweed?  Will this stuff hurt our trees?  I have three daughters ages 2, 4, and 7, and I'm worried the youngest may confuse them for blueberries, which grow nearby.  I'm considering going out today and chop-n-dropping all of it. 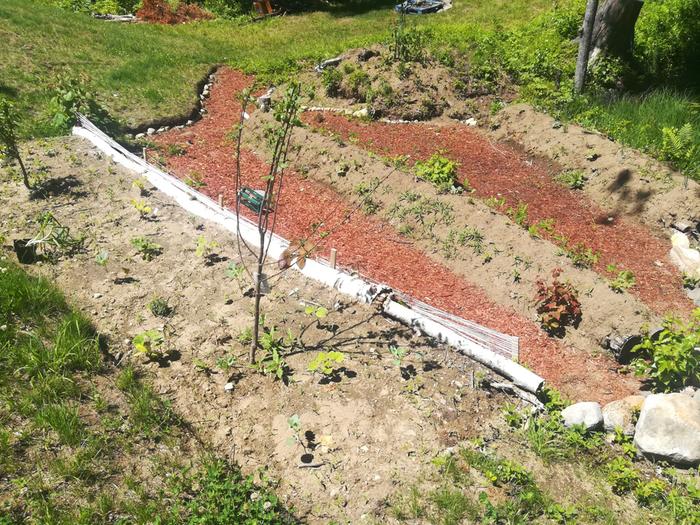 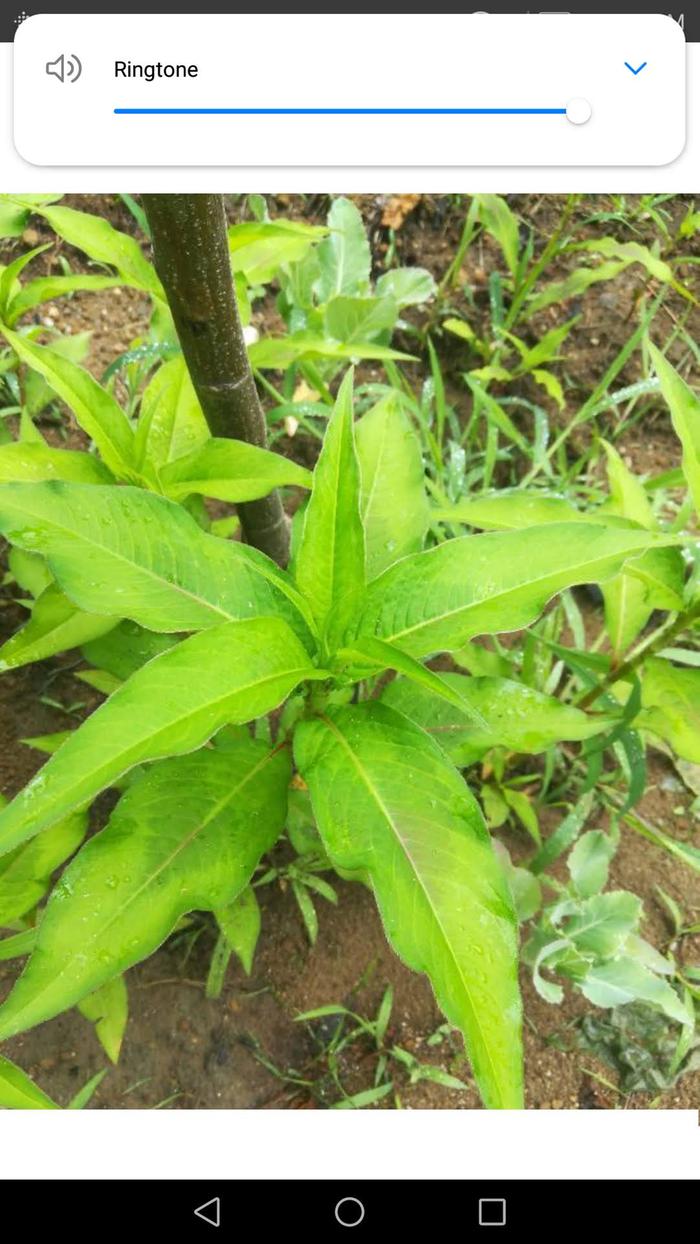 Jordan Holland
Posts: 103
Location: Western Kentucky
24
posted 1 week ago
Pretty sure it's not poke. I've seen it plenty, but can't remember what it is. If it's what I've seen, it will get darker as it matures, leaves and stem, maybe somewhat variegated. Poke will be much larger, fleshier and bulkier, even when only about a foot high. Poke will also develop it's characteristic red stem rather early.

posted 1 week ago
I will second that I do not believe that to be poke. The ones I see are not as pointy and strap like of leaves. I'll add a pic of one in my yard.

If it were poke, I don't think there's need for serious concern. Phytolacca americana (poke) is a native plant. Though it is extremely successful and not the best at sharing. And perennial with crazy roots. But also great chop and drop and excellent at helping open up clay soil. The birds love it. I've not eaten it or used it medicinally, though those are options (with great care). It's also quite a beautiful plant.

Hope you figure out who this plant is! 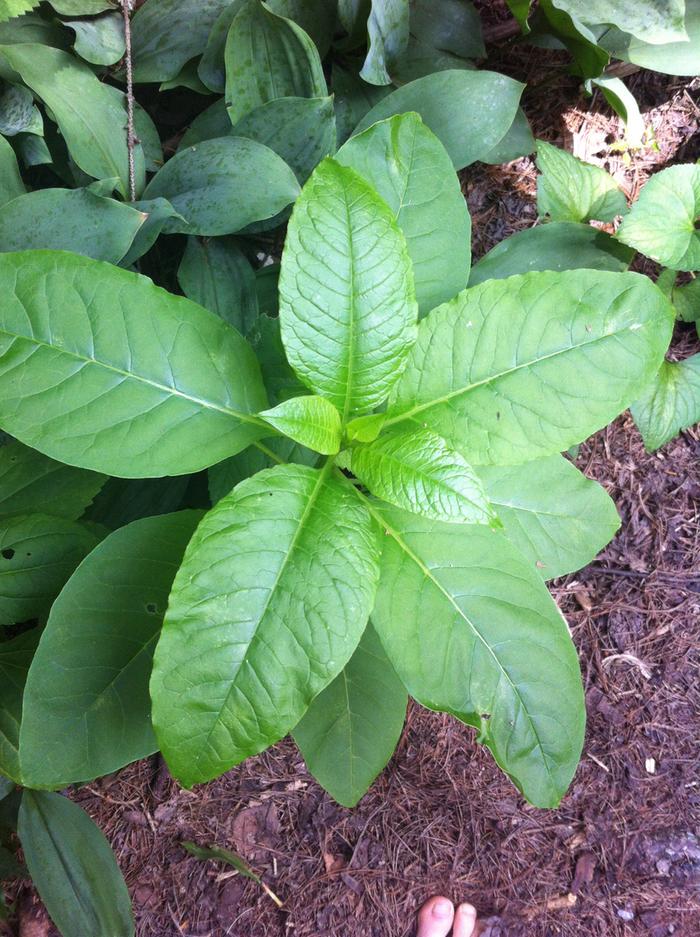 posted 1 week ago
I also don't know, but in my experience pokeweed berries stay green (and unappetizing looking) for a while giving you plenty of opportunity to get rid of them if you choose.

James Whitelaw
pollinator
Posts: 281
53
posted 1 week ago
I ran your image through The PlantNet app and got the following results in order of likelihood. Both are listed as invasive.


Persicaria maculosa (syn. Polygonum persicaria) is an annual plant in the buckwheat family, Polygonaceae. Common names include lady's thumb, spotted lady's thumb, Jesusplant, and redshank. It is widespread across Eurasia from Iceland south to Portugal and east to Japan. It is also present as an introduced and invasive species in North America, where it was first noted in the Great Lakes region in 1843 and has now spread through most of the continent.

Persicaria maculosa contains persicarin and tannins. The leaves and young shoots may be eaten as a palatable and nutritious leaf vegetable. It is often seen as a weed and rarely cultivated. A yellow dye can be produced from this plant with alum used as a mordant.


Impatiens glandulifera is a large annual plant native to the Himalayas. Via human introduction it is now present across much of the Northern Hemisphere and is considered an invasive species in many areas. Uprooting or cutting the plants is an effective means of control.

The common names Policeman's Helmet, Bobby Tops, Copper Tops, and Gnome's Hatstand all originate from the flowers being decidedly hat-shaped. Himalayan Balsam and Kiss-me-on-the-mountain arise from the plant originating in the Himalayan mountains. Ornamental jewelweed refers to its cultivation as an ornamental plant.

The genus name Impatiens, meaning "impatient", refers to its method of seed dispersal. The species name glandulifera comes from the Latin words glándula meaning 'small gland', and ferre meaning 'to bear', referring to the plant's glands.

Posts: 2725
Location: Officially Zone 7b, according to personal obsevations I live in 7a, SW Tennessee
967
I like...

posted 1 week ago
Its definitely in the polygonum family, I don't know which one. Many of them are edible. I just chop and drop, using them as mulch.

Steven Gallo
Posts: 7
Location: Southern Maine
2
posted 1 week ago
Persicaria maculosa seems to be the one.  The leaves did have very dark colorations that faded over time.

It's strange that they are only growing - like crazy - around the bases of the two trees we planted.  I wonder if they piggybacked in the planter from where we bought them?  I don't see how else that pattern would be explained.

Bummer that it's invasive, but we have a small garden.  As long as it won't mess with our tress, I'll just chop and drop.  Thank you all for the help! 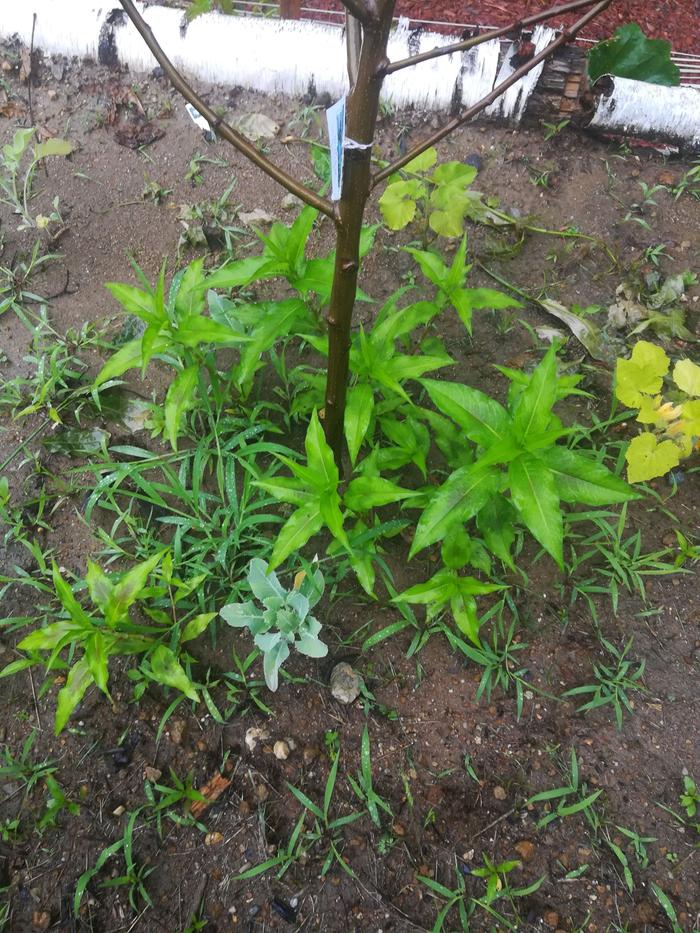 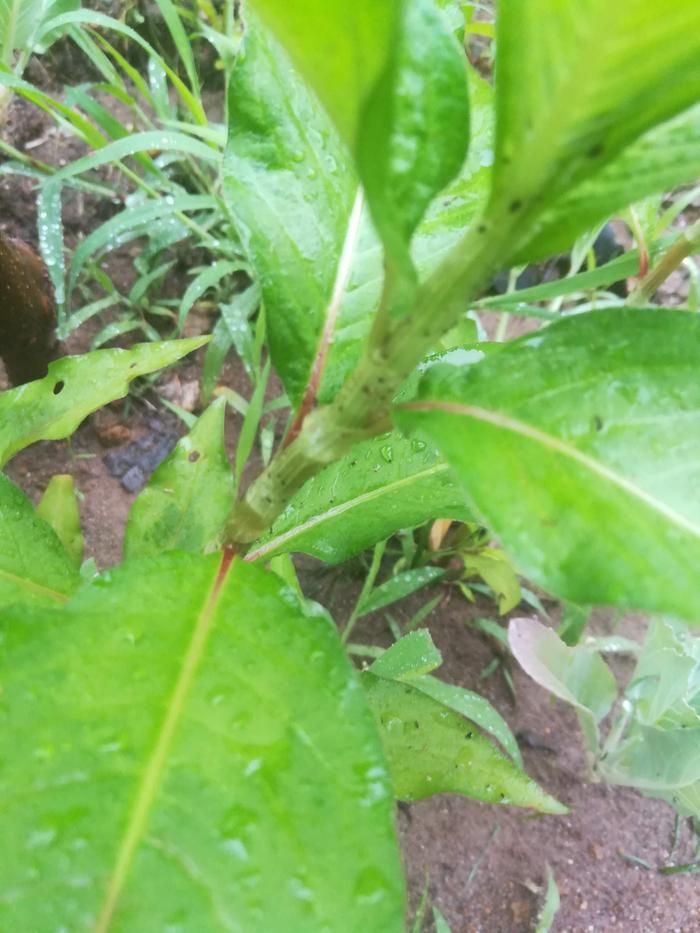 posted 1 week ago
It sure does look like it came in with the tree!

I have this stuff all over, and it seems harmless in my yard and gardens.  It's easy to recognize when it's small, and knock it back as a seedling.