s. lowe
pollinator
Posts: 866
193
posted 1 year ago
I have embarked on a goal to compost as much of the packaging that comes into my house as possible. With folks around  us still generally refusing personal cups/Tupper ware for coffee or bulk food this means a lot more to go stuff including lots of supposedly compostable plastic lids.

Ive started just tossing them into the compost. Today, I uncovered the first one.

This lid has, at this point, undergone ~3 weeks of sealed, anaerobic fermentation with bokashi as well as an additional ~3 weeks of semi aerobic fermentation/draining. I wouldn't expect it to be broken  down yet at all but I'm hoping that the bokashi inoculation will help breakdown actually happen. I know that prior to this lid I tossed in some supposedly compostable plastic that a local baker packages their bread in as well as a number of cups, to go boxes, egg flats, and berry boxes, and all of them have either completely or mostly disappeared. I know these are the most borderline thing I've introduced (pretty sure these have the *in an industrial compost facility* notice on them). But I'm optimistic.

Has  anyone else combatted this probable bit of industrial green washing? Feel free to share your results
Inge Leonora-den Ouden
pollinator
Posts: 2066
Location: Meppel (Drenthe, the Netherlands)
640
I like...

Now I found information telling these 'compostable plastic bags' can only be composted in an industrial composting factory. But there is no such factory in my region!
I would call this 'greenwashing'

"ASTM D6400 is the standard specification for solid material biodegradation (by composting) required for the labeling of plastics designed to be aerobically composted in municipal or industrial facilities.

The series of ASTM D6400 is a four-part biodegradation test for evaluating biodegradability that includes elemental analysis, plant germination (phytotoxicity), and mesh filtration of the resulting particles.

The ASTM D6400 test method uses a set of conditions that favor microorganisms that thrive above 50 degrees centigrade, making the test method somewhat selective for bacterial based biodegradation.  This component of the test method does favor bioplastic types of materials, and may not provide for testing parity when comparing the ASTM D6400 to other test methods such as the ISO 16929.   In addition, the method is not meant to represent composting conditions in a home compost facility,  as the composting  temperature requirements are not likely to be achieved in a home facility over an extended period of time."

Hmm. Wonder what will happen if I boil this stuff next time I have waste heat.

Phil Gardener
pollinator
Posts: 336
Location: Near Philadelphia, PA
73
posted 1 year ago
I put one of those corn-based plastic bottles that was marked biodegradable in my compost pile once and put up with it for 2+ years with absolutely no change.  Ended that experiment.
Joshua Seewald
Posts: 5
1
posted 1 year ago
I stopped trusting this stuff completely when I heard that some "compostable" products are made of microplastic particles glued together with something compostable, so that the non-compostable stuff slows down the decomposition of a material that would normally decay before consumers were done with it. If that's true, then even a "success" with compostable packaging might be doing more harm than good.
Kenneth Elwell
pollinator
Posts: 690
Location: Boston, Massachusetts
243
3
I like...

posted 1 year ago
I have successfully composted the compostable "cold" cups and lids (the clear plastic kind) as well as the "hot" cups which look similar to a standard paper coffee cup.
"Industrial Composting Facility" is merely shorthand for a well-managed HOT compost pile.
As Douglas states, temperatures over 50*C are required, and if one follows the National Organic Program for composting, you'd be over 55*C/131*F for 15 days.
(We stopped composting them a few years ago; when in a short span of time, we became certified organic and they are not an allowed feedstock, and also a commercial composting service became available to us.)

The biggest trouble that I found was that for the first week, especially the cups near the outside of the pile, they are a round rolling object. "Intact" fruit and citrus rinds were a similar trouble, when turning the pile, they roll off and to the sides, sometimes a long distance.
A lesser trouble was nesting of the cups, which slowed their breakdown slightly, but not enough to worry about.
After about the third turning, the cups would have split apart at the rim and resembled daisy flowers, and then into small chips.

You really need a pile a cubic meter/yard or more (maybe >10 cubic yards) to easily create and sustain the heat required and keep the cups buried in the hot center of the pile).

s. lowe
pollinator
Posts: 866
193
posted 1 year ago
Unexpected update to post. I was throwing some things onto the compost and it has shrunk back incredibly. This left the lid exposed near the edge. 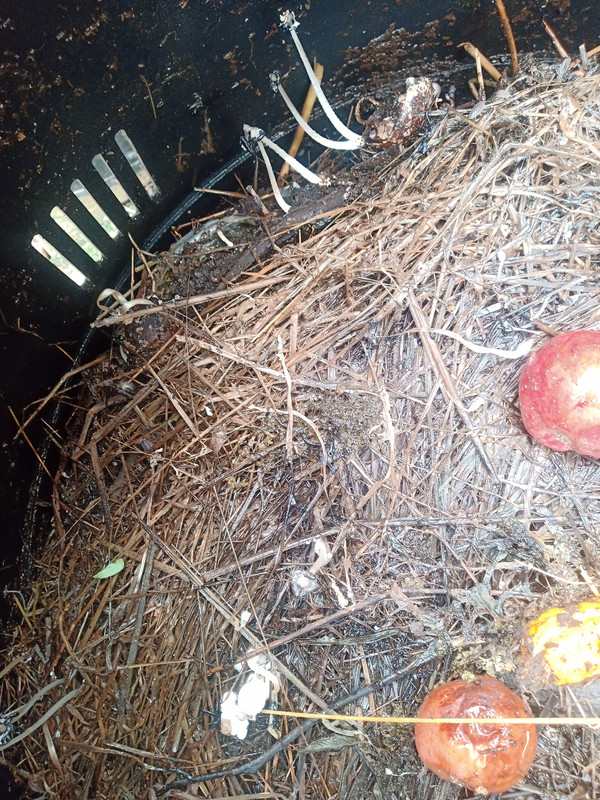 You can see it in the upper left. I prodded it gently and it has become extremely brittle. I will be having to mess with this pile again in 2 weeks or so when I add the next head of stuff. I wonder if the fungal presence helps degrade this material faster? It definitely got hot for a week or so but the lid ended up further from the center than o remembered.

Check out the fungal action though! 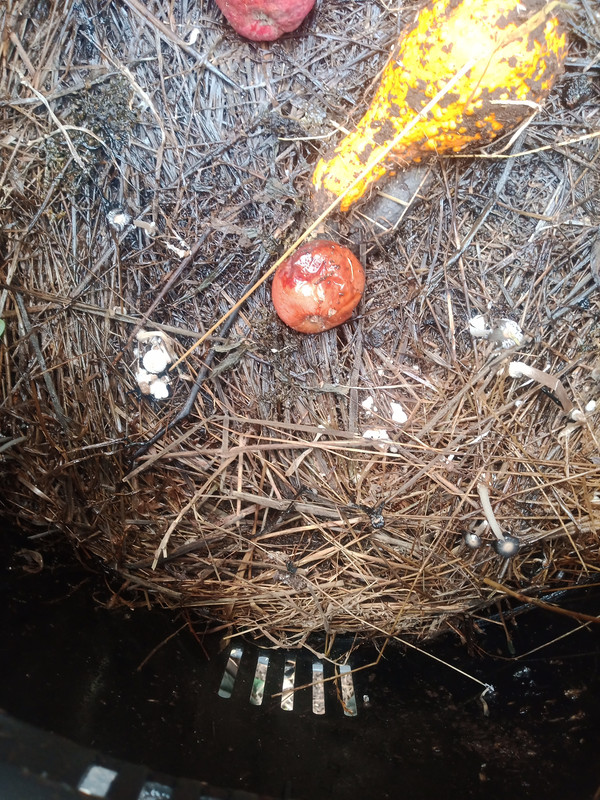