Bummed about my sweet potatoes getting mold while curing.

posted 5 months ago
I was so proud of my sweet potato harvest this year.  About 100lbs harvested about a month ago.  Not pretty, and a lot of insect damage, but some of them were really large.

So after harvesting, I allowed them to sit in my garage for about a week.  It was still warm out, and the garage was probably around 75 degrees with very low humidity.  I didn't leave them in the garage for any particular reason other than not having time to deal with them, and start the curing process.

After that week of them sitting, I took a soft brush and dusted off most of the dirt that was on them.  At no point did I wash them with water, and they were always handled gently.

Then I put them on a metal rack, and sealed the rack with a plastic drop cloth.  I put a crock pot filled with water under the rack so that it would warm the tented space and keep it with very high humidity.   The temperature was between low 70'sF and low 80'sF for that week.

I noticed a sweet spicy smell, and I think it was the mold.  I pulled the plastic down and most of the sweet potatoes had a white mold growing on the skin.  One sweet potato completely went soft, and a few others were getting slightly soft when pressed hard so I tossed them into the compost (I actually buried them so the chickens wouldn't eat them).

So I pulled them off the rack in the room they were in, and then put them on a rolling rack outside in the bright sunshine here (thinking it would kill the mold growing).  I left them out in the sun for a day and then rolled them back into the cool dark garage which is where they're now sitting.  The mold died back a lot, but there are still signs of it.

I read online that mold is a majorly bad thing to have on sweet potatoes, and that they should be thrown out if there are signs of it.
Well, that being said, I've ate two of the big ones in the last week that had surface mold.  They were as hard as any sweet potato I've ever bought when pressed on, and I peeled the outside skin and probably 1/4" of the flesh inside and there were no signs of bad stuff.  They looked great, nice and bright orange inside, and they tasted fine.  My liver is still functioning as far as I can tell...

Anyone else have this happen when they're curing their potatoes?  Am I crazy to have ate two of them already?  Any advice would be appreciated.  I still haven't washed them or done anything to try to remove the mold. 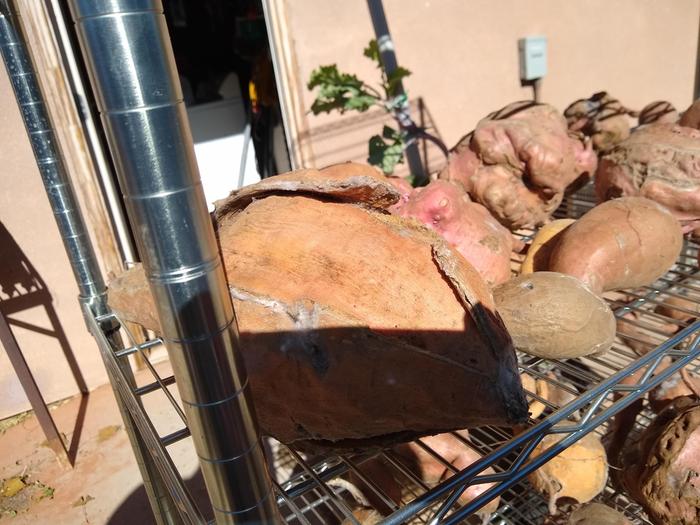 posted 5 months ago
I have no personal experience with curing but the method you described is, in my neck of the woods, guaranteed to grow mold. So hopefully someone else will respond with a suggestion.

But I'm so sorry about your beautiful harvest!!! SO sad.

For what it's worth, I've cut mold off sweet potatoes and eaten them before. But I have a very sensitive nose and I can smell if there's mold actually permeating the food. If so, I don't (want to) eat it. If it's surface and can be removed, no biggie.

I store them in a cardboard box after letting them cure laid out on the floor by the stove for a few weeks.  Letting the skin get tough and dry is important.

Maybe you can rescue some by scrubbing the mold off and starting over?
I think I might scrub under hot water, towel dry then use a fan...maybe the mold has not gone very deep.

Did someone suggest a humid environment for storage?

posted 5 months ago
I think it is advised to store in high humidity but I never have and mine keep very well. I have rarely seen mold but the few times I have it was limited to cuts or scrapes that I guess had not healed over well enough.

Like I said, I don't worry over the humidity although I've read that I should. I also ignore the advice not to wash them. I fill a large tub with warm water and swirl them around in it to help remove any large amounts of soil that might be clinging to the skin then I lay them on an old bed sheet in the sun and air to dry. That's really about all I can do, regardless of what is recommended for temperature and humidity, they get whatever the weather is giving that day but I do try to do my harvest on warm sunny days.

Things I am very careful not to do is rub, scrub or brush them at all. Nothing that might even slightly abrade or otherwise damage the skins. I used to spray them with the hose on harvest but the skins are tender when first dug and I was afraid the pressure might be too much. The temperature of  hydrant water is pretty chilly as well and I think that might not be good either but I don't know that for sure.

From what I've read a warm curing period is necessary to increase sweetness and heal surface damage. I'm not gonna argue with that but I am pretty sure sweetness is also genetic, I've tasted many that are sweet right out of the ground. Healing the surface is important and for that I just try to be careful not to cause it and make sure they are perfectly dry before storing.
Joshua Bertram
Posts: 475
Location: St. George, UT. Zone 8a Dry/arid. 8" of rain in a good year.
135
I like...

posted 5 months ago
Thanks Sonja, and Judith!

So all the stuff I found online about the curing process said to put them in a high heat, high humid area for a week or so.  Specifically 85F, and 80% humidity so that the starches would turn to sugars.  Then after that week put them in a cool dark area for a couple of weeks and then they should be good to store for months.
Most people were putting them in a sealed plastic bag/box of some type, but I had so many I figured I'd just use the same concept and put them on the rack with a heat/humidity source at the bottom.

The humidity here is very low, it's in the teens most of the time.

This is just a quick google search from right now asking about curing sweet potatoes.  I know I watched a few videos and they basically said the same thing.

I will try scrubbing them under the hot water and starting over.  Judith I remember reading about your placing them next to the heater, but I'm guessing it's more humid where you're at.

I don't think I'll try the high humidity technique again.  I don't mind them not being really sweet, and that seems like it's the only reason to put them in the humidity/heat.

Thanks for the real world experience and advice!

Judith Browning
Posts: 7936
Location: Ozarks zone 7 alluvial,black,deep clay/loam with few rocks, wonderful creek bottom!
1692
3
posted 5 months ago
We've always stored them in the room with the heat, now it is gas but for many more years it was wood and the room was always quite dry. I used to have market baskets I kept them in and would throw a rug over the top...now I just use cardboard boxes.  The variety I have is sweet right out of the ground and seem to be the same for a year or so stored this way.

Sorting has always been important here as occasionally I'll have one turn bad for no particular reason that I can see, so I sort a box for what look like the best keepers and ones to take slips from the next year, then a box of the next grade and the 'eat now' ones sit in a bowl in the kitchen.  I try to go through the boxes at least once over the winter to cull any that don't look like they're making it.

We have friends who, years ago, harvested theirs, cleaned them and put them in their refrigerator for the six weeks they were gone tree planting...big lesson learned there...humid and COLD...not good