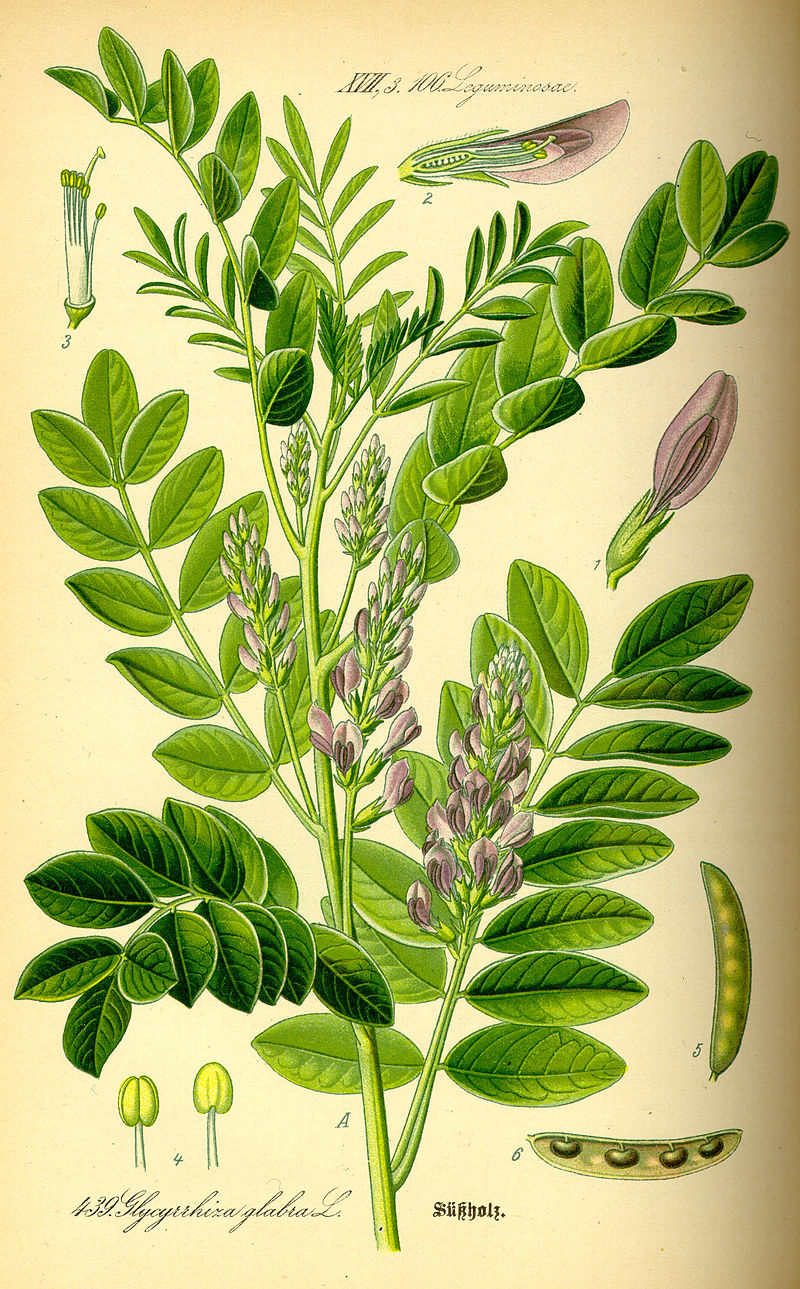 Since my last post on Bitter Herbs was on Oregon Grape, it seemed appropriate that this one should be on Licorice.  Although often associated with candy, Licorice is a Bitter/Sweet Herb (it is more bitter to some tastes than others, while some find it very sweet... and some just can't stand it).  It is also an herb that should not be combined in a formula with Oregon Grape or other members of the Barberry family.  Licorice neutralizes the effect of Berberine.  From an herbal energetics viewpoint, whereas Oregon Grape is stimulating tot he liver, Licorice is cooling.  That is not to say that Licorice is not good for liver health - in fact, it is one of the most important herbs for the liver!

A licorice root extract called glycyrrhizin has also shown promise as a possible remedy for chronic hepatitis C and liver cancer, says University of California, Davis, researcher Mark Zern, MD. But how it works is unclear, Zern says, and its long-term benefits have not been tested. https://www.webmd.com/digestive-disorders/news/19991116/herbal-therapies-liver-disease#1

It seems that research into Licorice for liver protection and repair is very promising, as the following excerpt  explains.  (This website also has a good article on medical research into Licorice in treating liver damage and cancer, but they won''t let me copy a quote https://plantmedicines.org/licorice-root-reduces-liver-damage-alcohol/)

1. LICORICE ROOT STOPS THE DAMAGE
When we drink alcohol, our liver produces enzymes to help repair the damage that the alcohol does. When you drink in moderation, these enzymes do their job and repair the liver without any problem. However, people who drink in excess are often found with a lot more of these enzymes in their liver because the damage can’t be repaired.

Science has found that licorice root actually stops the damage from occurring in the first place. A group of researchers concluded in one of their studies that, “These results suggest that consumption of the proprietary glycyrrhizin study product [licorice extract] during alcohol consumption may support improved liver health compared with drinking alcohol alone.”

2. LICORICE ROOT REPAIRS AND IMPROVES LIVER ENZYMES
A study that was done on mice who were fed an alcohol-diet for 4 weeks found that the hepatoprotective effect of licorice actually helped repair the damage that was already there. The scientists concluded that, “On the basis of our recent findings that licorice protects cells against inflammation and oxidative stress, we hypothesized that licorice would alleviate alcohol-induced fatty liver injury.”

Also, according to the University of Michigan, “Licorice flavonoids, as well as the closely related chalcones, help heal digestive tract cells. They are also potent antioxidants and work to protect liver cells. In test tubes, the flavonoids have been shown to kill Helicobacter pylori, the bacteria that causes most ulcers and stomach inflammation.”
https://www.powerofpositivity.com/science-explains-licorice-root-can-heal-liver-damage/

So, how can you use Licorice for liver support, if you also want to use Oregon Grape for liver stimulation?  Simple, don't use them at the same time - don't combine them into the same formula.  That is one of the benefits of herbal bitters; there is so much variety!  You can take Swedish Bitters in the morning, my Daily Digestive Bitters (which are Gentian and Oregon Grape based https://southernappalachianbitters.blogspot.com/2020/09/my-daily-digestive-bitters-ddb-formula.html) before lunch and a Licorice based Bitters before dinner.  I've come up with a very nice Bitters combining Licorice, Dandelion and Burdock root, with some cooling aromatics.  I will post that next week.  That gives you a nice balance.

But, you may ask, is this the same Licorice found in candy?  Well, not usually.  If you buy specialty, bitter, salty licorice candies from Sweden and a few other mostly Nordic locations, then maybe.  I absolutely LOVE those, by the way!  Most other candies are artificially flavored.  But, even those that are naturally flavored are usually not flavored predominately with Licorice.  Anise is actually the flavor that most people associate with Licorice.  Anise has a Licorice-like flavor, that is stronger aromatically but less bitter.  Several plants have a Licorice-like flavor.  Fennel, caraway and Angelica come to mind.  The Licorice flavor, that usually isn't Licorice based, finds its way into many confections, and beverages.  Anisette, Pernod, Pastis, Sambuca, Jägermeister, sometimes Ouzo and the infamous Absinthe, just to name a few.

Licorice is a flavor that people generally either love or hate, with very little middle ground.  I decidedly LOVE it! I could eat Salty Licorice (which began as a cough medicine, BTW), while sipping Licorice flavored Ouzo, drink Anisette with a fennel salad, topped with caraway seeds, roast duck or pork flavored with anise,  Anijsmelk (Dutch Licorice flavored warm milk), with Licorice cookies for desert.... and chew some Black Jack gum.... and STILL not get enough!

Lets get to the medicinal qualities of Licorice.  According to the How To Book of Herbs, by Velma J. Keith and Monteen Gordon: 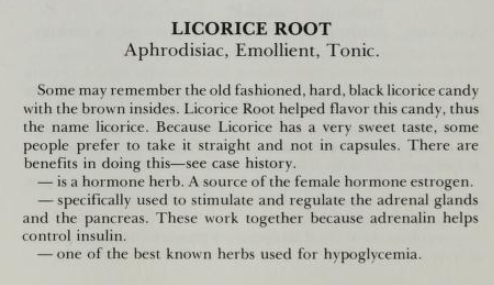 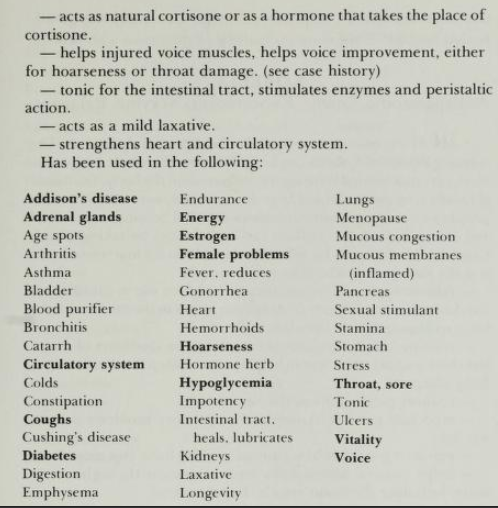 My, an "Aphrodisiac, Emollient, Tonic" - THAT is covering a lot of ground!  More specifically, according to my favorite quick online herb reference, www.naturalmedicinalherbs.net:

Medicinal use of Liquorice: Liquorice his one of the most commonly used herbs in Western herbal medicine and has a very long history of use, both as a medicine and also as a flavouring to disguise the unpleasant flavour of other medications. It is a very sweet, moist, soothing herb that detoxifies and protects the liver and is also powerfully anti-inflammatory, being used in conditions as varied as arthritis and mouth ulcers. The root is alterative, antispasmodic, demulcent, diuretic, emollient, expectorant, laxative, moderately pectoral and tonic. The root has also been shown to have a hormonal effect similar to the ovarian hormone. Liquorice root is much used in cough medicines and also in the treatment of catarrhal infections of the urinary tract. It is taken internally in the treatment of Addison's disease, asthma, bronchitis, coughs, peptic ulcer, arthritis, allergic complaints and following steroidal therapy. It should be used in moderation and should not be prescribed for pregnant women or people with high blood pressure, kidney disease or taking digoxin-based medication. Prolonged usage raises the blood pressure and causes water retention. See also the notes above on toxicity. Externally, the root is used in the treatment of herpes, eczema and shingles. The root is harvested in the autumn when 3 - 4 years old and is dried for later use.

Known hazards of Glycyrrhiza glabra: A gross overdose of the root can cause oedema, high blood pressure and congestive heart failure.
http://www.naturalmedicinalherbs.net/include/searchherb.php?herbsearch=liquorice&x=0&y=0

According to the late Herbalist, Michael Moore (I always make that distinction, so he is not confused with the film maker) described Licorice as a particularly effective Kidney Stimulant.  Signs of kidney deficiency include frequent, diluted/pale urination, flushing, thirst, low blood pressure when rising from a seated position and a tendency to react poorly to sudden changes in weather, barometric pressure, temperature and humidity.  He also solved the mystery of why Licorice is sometimes warned of as raising blood pressure in certain people.  He said that it affects aldosterone in some anabolic types - usually middle aged, heavy set men with red faces or post menopausal women... the type that will take over a club or organization and organize events with a iron fist.

Now we have an herb that can be used in Bitters to help the Liver and the Kidneys.  That is pretty impressive, but it is not all.  Liver, Skin and Small Intestine tissue are all similar and remarkably connected in their health.  Anything that helps the Liver usually helps the Skin and Intestines.  Similarly, the Kidneys and Lungs share a connection.  Both organs aid in elimination of waste and in keeping the blood healthy.  Anything that helps the Kidneys generally helps the Lungs.  Perhaps that is why Licorice has been traditionally used for colds and coughs.

Hippocrates was making Licorice based tonics around 400 BC. It seems the traditional wisdom of including licorice in alcoholic beverages and cough-sweets was wise, indeed.