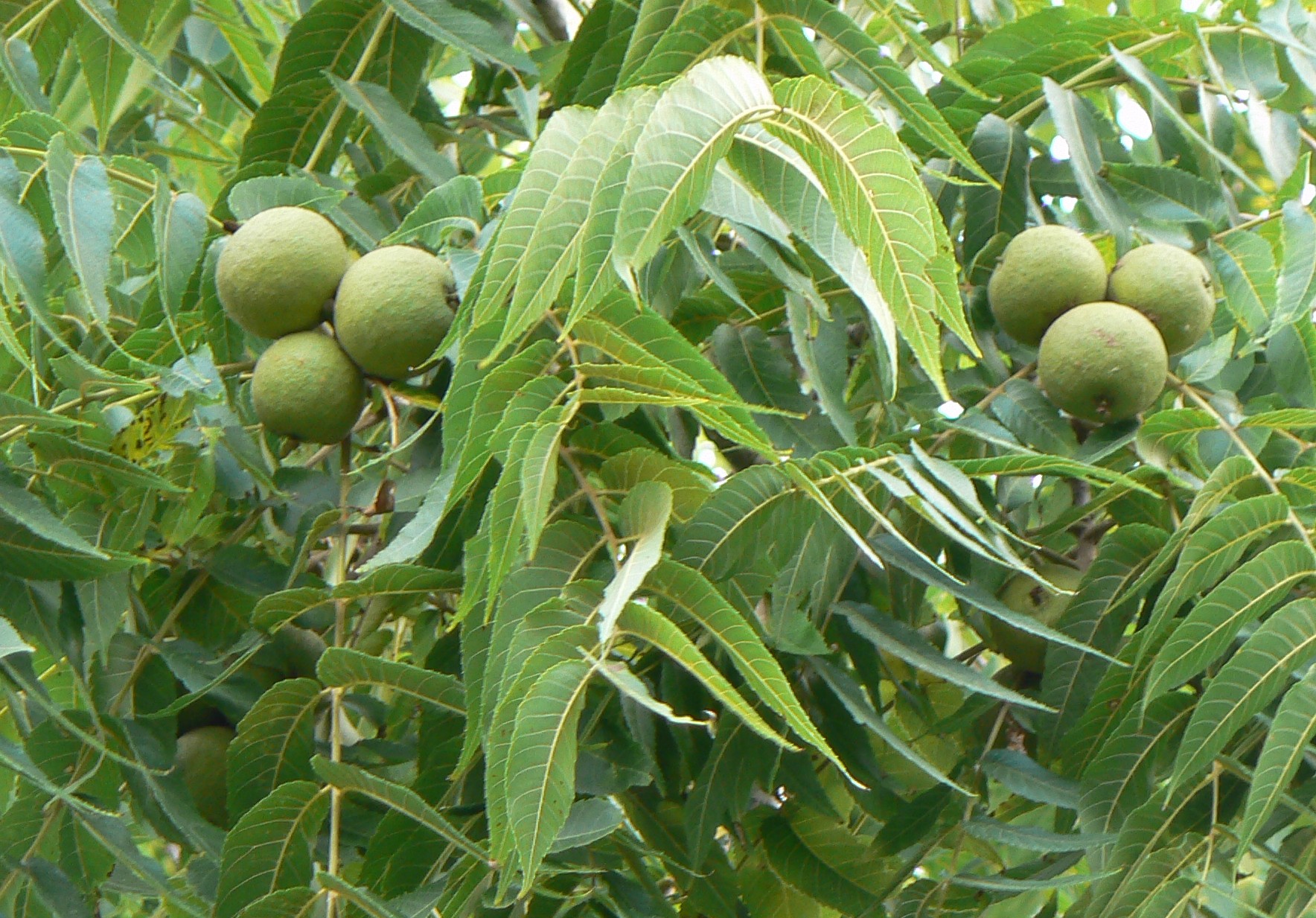 It seems to me that among the most often overlooked medicinal herbs are those right over our heads….trees! Among the many trees whose leaves and bark are useful for medicine are pines, junipers, oaks, buckeyes, cherries, birches, elms, willows, witch hazel, dogwoods, magnolias, ginkgo, and several others… addressing such complaints as coughs, sore throats, pain, diarrhea, constipation, inflammation, varicose veins, diabetes, infections and a host of other illnesses.  Perhaps, the term “herbal medicine” causes us to look for herbaceous plants? In truth, much of our most useful and potent medicine is growing in our yards, parks and forests, comprising the very landscape itself! Among the most regal and historied of these medicinal trees is the Juglandaceae, the Walnut family…. Walnuts, black walnuts, pecans and hickories.  Although some members of the family have more specific actions or are stronger in one regard than another, I will generalize these under “Walnuts”.


The properties of Walnuts are many, and not the least of these are the delicious and nutritious nuts.  Walnuts are rich in protein, omega 3 and omega 6 fatty acids, ALA, copper, folic acid, manganese, B-6, vitamin E and a variety of other antioxidants and useful substances.  Our herbalist ancestors, though, who subscribed to “The Doctrine of Signatures”(a school of thought that an herb’s usefulness may be indicated by the similarity of its appearance to a corresponding body part or visible illness) would certainly have noticed the similarity between the nut and the human brain.   William Cole, an exponent of the doctrine of signatures, says in Adam in Eden, 1657:


'Wall-nuts have the perfect Signature of the Head: The outer husk or green Covering, represent the Pericranium, or outward skin of the skull, whereon the hair groweth, and therefore salt made of those husks or barks, are exceeding good for wounds in the head. The inner wooddy shell hath the Signature of the Skull, and the little yellow skin, or Peel, that covereth the Kernell, of the hard Meninga and Pia-mater, which are the thin scarfes that envelope the brain. The Kernel hath the very figure of the Brain, and therefore it is very profitable for the Brain, and resists poysons; For if the Kernel be bruised, and moystned with the quintessence of Wine, and laid upon the Crown of the Head, it comforts the brain and head mightily.'


The medicinal properties of the Walnut are not in the nut alone, however.  The husk, shell, leaves and bark all have their uses. The Lost Book of Herbal Remedies states, “Black walnut is an anti-inflammatory, anti-fungal, antiviral, astringent, emetic, laxative, painkiller, and vermifuge. The green hulls are more potent than the mature black hulls….”

According to Plants for a Future:


John Gerard was a great herbalist, collector and grower of most any plant he could acclimate to

the English climate.  His gardens may have provided inspiration for William Shakespere (believed to be a neighbor and friend), and likely provided much inspiration for those wonderful plays and poems full of woodland scenes and plant lore.  Surely, the two knew much of the grand English Walnut and its uses.  Of Walnut, Gerard wrote:


Dry nuts taken fasting with a fig and a little Rue withstand poison, prevent and preserve the body from the infection of the plague, and being plentifully eaten they drive worms forth of the belly.  The green and tender nuts boiled in sugar and eaten as succade, are a most pleasant and delectable meat, comfort the stomach, and expel poison.  The oil of walnuts made in such manner as oil of almonds, maketh smooth the hands and face, and taketh away scales or scurf, black and blue marks that come of stripes or bruises.  Milk made of the kernels, as almond milk is made, cooleth and pleaseth the appetite of the languishing sick body.  With onions, salt, and honey, they are good against the biting of a mad dog or man, if they be laid upon the wound….The outward green husk of the nuts hath a notable binding faculty….  The leaves and first buds have a certain binding quality, as the same author showeth; yet there doth abound in them an hot and dry temperature.  Some of the later physicians use these for baths and lotions for the body, in which they have a force to digest and also to procute sweat.


Being an herbal historian, Gerard also included, “Being both eaten, and also applied, they heal in short time, as Dioscorides saith, gangrenes, carbuncles, ægilops, and the pilling away of the hair: this also is effectually done by the oil that is pressed out of them, which is of thin parts, digesting and heating.  Galen devised and taught to make of the juice thereof a medicine for the mouth, singular good against all inflammations thereof.”


Culpepper also believed Walnuts to be useful for dog bites (although I would not suggest them for rabies, unless there was no other treatment available!), and for other venoms and poisons:


'if they' [the leaves] 'be taken with onions, salt, and honey, they help the biting of a mad dog, or the venom or infectious poison of any beast, etc. Caius Pompeius found in the treasury of Mithridates, King of Pontus, when he was overthrown, a scroll of his own handwriting, containing a medicine against any poison or infection; which is this: Take two dry walnuts, and as many good figs, and twenty leaves of rue, bruised and beaten together with two or three corns of salt and twenty juniper berries, which take every morning fasting, preserves from danger of poison, and infection that day it is taken. . . . The kernels, when they grow old, are more oily, and therefore not fit to be eaten, but are then used to heal the wounds of the sinews, gangrenes, and carbuncles. . . . The said kernels being burned, are very astringent . . . being taken in red wine, and stay the falling of the hair, and make it fair, being anointed with oil and wine. The green husks will do the like, being used in the same manner. . . . A piece of the green husks put into a hollow tooth, eases the pain.'


As usual, Maude Grieves gives us the most complete explanation of how herbs were used in the British tradition, her book being published in the 1940s and summing up so many centuries of folk medicine:


The bark and leaves have alterative, laxative, astringent and detergent properties, and are used in the treatment of skin troubles. They are of the highest value for curing scrofulous diseases, herpes, eczema, etc., and for healing indolent ulcers; an infusion of 1 OZ. of dried bark or leaves (slightly more of the fresh leaves) to the pint of boiling water, allowed to stand for six hours, and strained off is taken in wineglassful doses, three times a day, the same infusion being also employed at the same time for outward application. Obstinate ulcers may also be cured with sugar, well saturated with a strong decoction of Walnut leaves.


The bark, dried and powdered, and made into a strong infusion, is a useful purgative.

The husk, shell and peel are sudorific, especially if used when the Walnuts are green. Whilst unripe, the nut has wormdestroying virtues.


The fruit, when young and unripe, makes a wholesome, anti-scorbutic pickle, the vinegar in which the green fruit has been pickled proving a capital gargle for sore and slightly ulcerated throats. Walnut catsup embodies the medicinal virtues of the unripe nuts.


It is much cultivated in some parts of Italy, France, Germany and Switzerland, and formerly also in England, particularly on the chalk-hills of Surrey, for the sake of its timber, as well as for its fruit.


On the Continent, the wood is still in great request for furniture, but when mahogany became a favourite wood in this country, in the early part of last century, the old walnut trees that were cut down were not always replaced by young ones, so that plantations of this tree dlminished.


The leaves have a very strong, characteristic smell, aromatic and not unpleasant, but said to be injurious to sensitive people. They have three, sometimes four pairs of leaflets and a terminal one, the leaflets varying in size on the same leaf, being 2 1/4 to 4 inches in length and 1 to 1 1/2 inch wide, entire, smooth, shining, and paler below.


Gather the leaves only in fine weather, in the morning, after the dew has been dried by the sun. The prevalence of an east wind is favourable, as the dry air facilitates the process of drying. Reject all stained leaves.

Drying may be done in warm, sunny weather, out-of-doors, but in half-shade as leaves dried in the shade retain their colour better than those dried in the sun and do not become so tindery. They may be placed on wire sieves, or frames covered with wire or garden netting - at a height of about 3 or 4 feet from the ground, to ensure a current of air - and must be taken indoors to a dry room or shed, before there is any chance of them becoming damp from dew or showers.


The juice of the green husks, boiled with honey, is also a good gargle for a sore mouth and inflamed throat, and the distilled water of the green husks is good for quinsy and as an application for wounds and internally is a cooling drink in agues.


The thin, yellow skin which clothes the inner nut is a notable remedy for colic, being first dried, and then rubbed into powder. It is administered in doses of 30 grains, with a tablespoonful of peppermint water.


The oil extracted from the ripe kernels, taken inwardly in 1/2 OZ. doses, has also proved good for colic and is efficacious, applied externally, for skin diseases of the leprous type and wounds and gangrenes.


One has to wonder how our ancestors discovered the medicinal uses of the Walnut family.  I would suggest that it came about through observation.  Walnuts, as the Latin name suggests, produce a substance called juglone.  Juglone prevents many trees and plants from growing near the walnut - this most unsociable quality prevents faster growing trees from competing with the Walnut for sunlight, water and other resources.  Some trees and bushes though are “juglone tolerant”, and if you wish to include Walnuts in your landscape, you will want to research such plants.  But basically, Walnuts don’t play well with others!  Could our ancestors have noticed this trait and wondered if such a unique and powerful plant could have medicinal use against other creatures that may compete for our resources…. parasites, bacteria, etc?


Obviously, I can only speculate.  But, I recall the horses on our farm when I was a kid, eating the tender spring pecan and black walnut leaves that grew in and near the pasture.  I was told not to let them eat too much, but that the horses somehow knew to eat those leaves to prevent worms. I also heard of folks feeding them to chickens for the same reason.  I don’t know if that is recommended, but the old folks would often say, “animals know what they need; they know what plants are medicine.”  Of course, that wasn’t always true, but this was the folk knowledge our ancestors knew.  It makes me wonder what other wisdom is to be found just over our heads and under our feet?