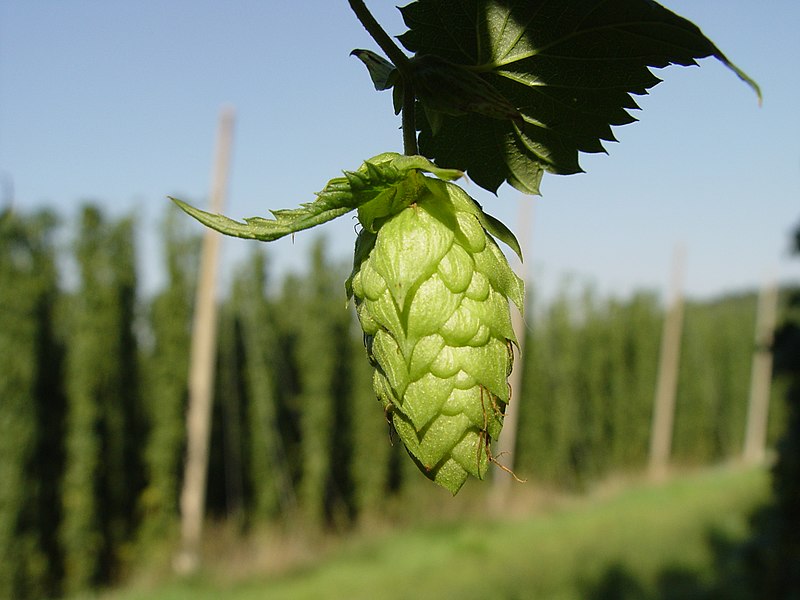 I first became enamored with the aromatic bitterness of Hops some 20 years ago, when I began brewing my own beer in college.  There was a great brew shop in Athens, GA and a brew club called the "Brew 52s", of course.... whether or not meeting were held in a "Love Shack", with a tin roof, rusted and a goat, is top secret.  But, armed with a copy of The Joy of Homebrewing and a couple of 5 gallon carboys, I began my foray into zymurgy.  I quickly discovered that my tastes differed from many as I became so enamored with the floral, slightly minty aromas and complex flavors of Cascade and Willamette (etc) Hops that I often doubled the the recommended amount of Hops in a recipe, making English Bitters and IPAs uniquely suited to my taste, but far too bitter for most. 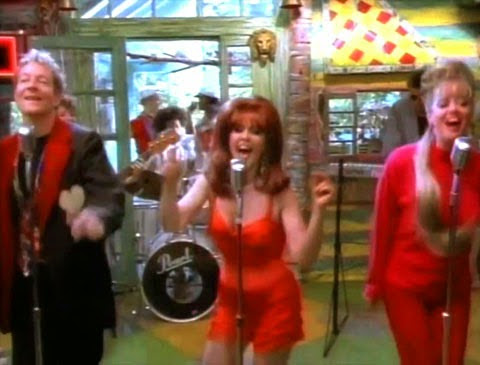 Love Shack, baby... that's where its at....headin' down the Atlanta Highway

The addition of Hops to beer is said to have been introduced by one of the two patron saints of Herbalism, Saint Hildegard of Bingen (the other being the Irish Saint Fiacre... and no, I cannot pronounce his name).  Saint Bingen recommended beer and wine in many of her herbal remedies and for general health.

In Hildegard of Bingen’s time, beer was not only ingrained in the culture at-large, but also as a regular part of monastic life. In fact, Hildegard of Bingen writings include one of the earliest known references to hops in brewing beer, and perhaps the first time in history hops were acknowledged as a preservative. Hildegard wrote about hops around 1150-1160 AD.

In her Physica, Hildegard writes the following.  “[The hop plant] is warm and dry, and has moderate moisture, and is not very useful in benefiting man, because it makes melancholy grow in man and makes the soul of man sad, and weighs down his inner organs. But yet, as a result of its own bitterness it keeps some putrefactions from drinks, to which it may be added, so that they may last so much longer.”  https://www.healthyhildegard.com/health-benefits-of-beer/ 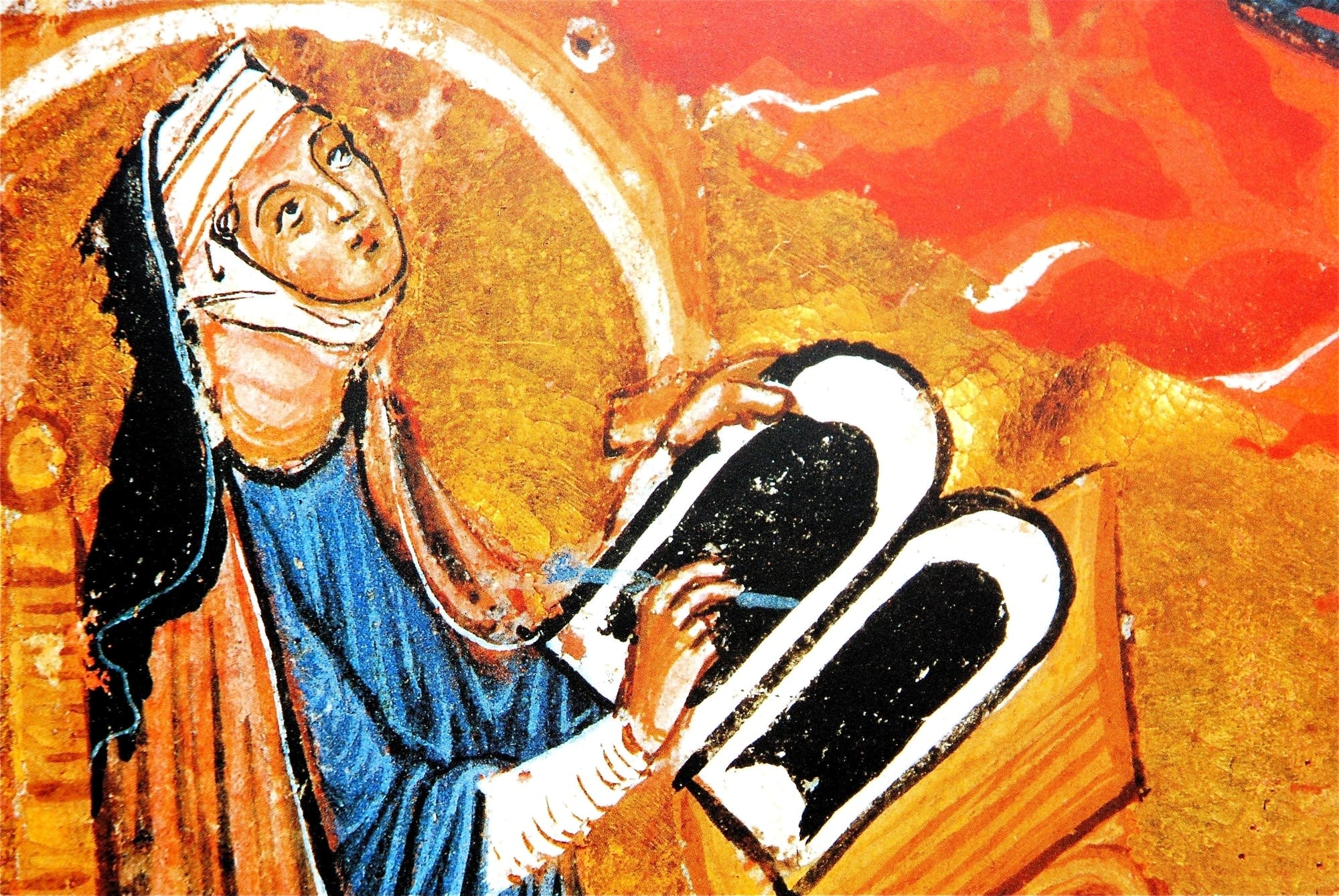 Prior to the introduction of hops, beer and ale were flavored with other bittering agents (being remarkably flat in flavor on their own).  These herbs are written about exhaustively in Sacred and Herbal Healing Beers: The Secrets of Ancient Fermentation, by Stephen Harrod Buhner... and I look very much forward to experimenting with them!  According to Buhner, the primary beer before the introduction (and eventual mandate) of Hops was Gruit.  This beer was made with Myrica Gale/Bog Myrtle, Yarrow and Wild Rosemary (Lednum palustre or Lednum glandusolum, "Labrador Tea" - not the herb Rosemary), was said to be highly inebriating.  In fact, many of the beers Buhner describes include herbs so highly inebriating and psychotropic as to be downright dangerous - Henbane, for instance, which is NOT on my list to brew... I don't mind getting a bit drunk, but going bats--t crazy and poisoned is another matter.  Regardless, Buhner argues that the transition to hops, which eventually became law, may have had much to do with the sedative effects of hops in beer (among other causes, such as government control and business interests).

In Mrs. Grieve's A Modern Herbal, we find:

Hops appear to have been used in the breweries of the Netherlands in the beginning of the fourteenth century. In England they were not used in the composition of beer till nearly two centuries afterwards. The liquor prepared from fermented malt formed the favourite drink of our Saxon and Danish forefathers. The beverage went by the name of Ale (the word derived from the Scandinavian öl - the Viking's drink) and was brewed either from malt alone, or from a mixture of the latter with Honey and flavoured with Heath tops, Ground Ivy, and various other bitter and aromatic herbs, such as Marjoram, Buckbean, Wormwood, Yarrow, Woodsage or Germander and Broom. They knew not, however, the ale to which Hops give both flavour and preservation. For long after the introduction of Hops, the liquor flavoured in the old manner retained the name of Ale, while the word of German and Dutch origin, Bier or Beer, was given only to that made with the newly-introduced bitter catkins.

It has been stated that the planting of Hops in this country was forbidden in the reign of Henry VI, but half a century later the cultivation was introduced from Flanders, though only to a limited extent, and it did not become sufficient for the needs of the kingdom till the end of the seventeenth century. The prejudice against the use of Hops was at first great. Henry VIII forbade brewers to put hops and sulphur into ale, Parliament having been petitioned against the Hop as 'a wicked weed that would spoil the taste of the drink and endanger the people.' In the fifth year of Edward VI, however, privileges were granted to Hop growers, though in the reign of James I the plant was still not sufficiently cultivated to supply the consumption, as we find a statute of 1608 against the importation of spoiled Hops.

Hops were at first thought to engender melancholy.

'Hops,' says John Evelyn, in his Pomona (1670), 'transmuted our wholesome ale into beer, which doubtless much alters its constitution. This one ingredient, by some suspected not unworthily, preserves the drink indeed, but repays the pleasure in tormenting diseases and a shorter life.'

The sedative value of Hops were not apparent to me, even in the large quantities I used in brewing my hoppy ales.  A tinctured combination of Hops, Skullcap and Passionflower has often been recommended as an herbal remedy for sleep.  But, I merely found it to be moderately relaxing.  Having struggled with insomnia most of my life (seemingly an inherited condition from my maternal grandmother), my issue with sleep is more from an over-active mind than a lack of muscle, heart or respiratory relaxation.  Not only do I have trouble falling asleep, but am often awakened by extremely vivid, adventurous and intense dreams.... and, if I awaken at 4 AM, as I usually do, I am rarely able to go back to sleep.  This issue is compounded by occasional night time indigestion, regardless of when or what I eat... in fact, most often caused by water.

So, the search began for a formula for Herbal Bitters that might help me sleep.  Although my experiments are ongoing and the proportions are yet to be finalized, I have found that Bitters with Hops as the primary bittering agent are quiet effective both to induce sleep and to settle the stomach.  Along with the standard herbs, Skullcap and Passionflower, I am including Withania Somnifera.  Withania (Ashwagandha) is an adaptogen that has a unique ability to quiet the mind and as the late herbalist, Michael Moore put it, to put space between a person and their stress.  It also, as the Latin name suggests, induces sleep.  The Hops being in larger proportion to the other herbs gives these Bitters a unique flavor.... something like celery.  That may  lead to the inclusion of another herb in subsequent trial batches, celery seed.  The humble celery also has calming and stress reducing effects with some similarity to Withania.  Look for more info on these Bitters soon! 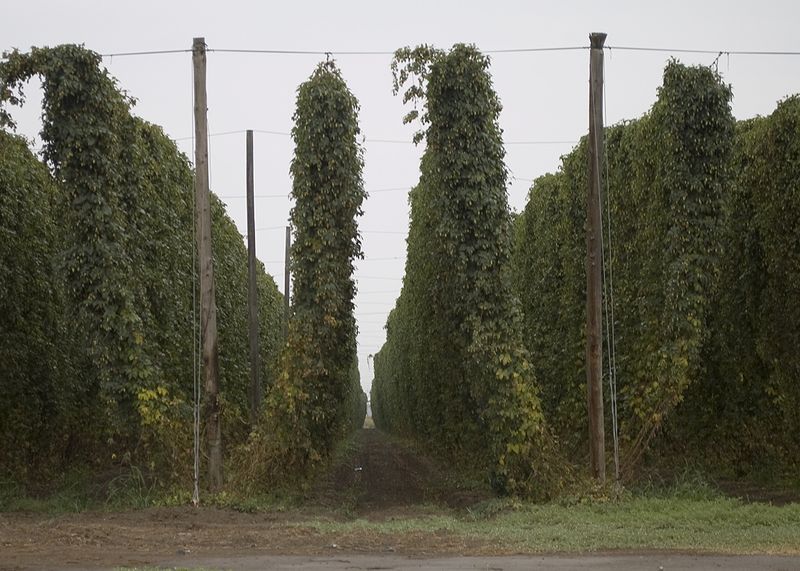 Hops are also very pleasant to grow.  One can trellis them into tall screens to block an unwanted view, or just to catch the breeze to enjoy their pleasant aroma.  The aroma from hops is said to be calming to many people.  A pillow or sachet of dried hops flowers kept in the bed is also a remedy for poor sleep.  By the way, Hops are in the same family as Cannabis... but smoking them won't get you high; it won't do much at all other than make you cough.

As usual, I'll give the specifics from  NaturalMedicinalHerbs.net (not only for convenience, but because it is a darn good source for the specifics!)  http://www.naturalmedicinalherbs.net/herbs/h/humulus-lupulus=hop.php

Medicinal use of Hop: Hops have a long and proven history of herbal use, where they are employed mainly for their soothing, sedative, tonic and calming effect on the body and the mind. Their strongly bitter flavour largely accounts for their ability to strengthen and stimulate the digestion, increasing gastric and other secretions. The female fruiting body is anodyne, antiseptic, antispasmodic, diuretic, febrifuge, hypnotic, nervine, sedative, stomachic and tonic. Hops are widely used as a folk remedy to treat a wide range of complaints, including boils, bruises, calculus, cancer, cramps, cough, cystitis, debility, delirium, diarrhoea, dyspepsia, fever, fits, hysteria, inflammation, insomnia, jaundice, nerves, neuralgia, rheumatism, and worms. The hairs on the fruits contain lupulin, a sedative and hypnotic drug. When given to nursing mothers, lupulin increases the flow of milk - recent research has shown that it contains a related hormone that could account for this effect. The decoction from the flower is said to remedy swellings and hardness of the uterus. Hop flowers are much used as an infusion or can also be used to stuff pillows where the weight of the head will release the volatile oils. The fruit is also applied externally as a poultice to ulcers, boils, painful swellings etc, it is said to remedy painful tumours. The female flowering heads are harvested in the autumn and can be used fresh or dried. Alcoholic extracts of hops in various dosage forms have been used clinically in treating numerous forms of leprosy, pulmonary tuberculosis, and acute bacterial dysentery, with varying degrees of success in China. The female fruiting body contains humulone and lupulone, these are highly bacteriostatic against gram-positive and acid-fast bacteria. A cataplasm of the leaf is said to remedy cold tumours.

Propagation of Hop: Seed - sow spring in a cold frame. Germination is fairly quick. Prick out the seedlings into individual pots as soon as they are large enough to handle and plant out in the summer or following spring. Division in spring as new growth begins. Very easy, you can plant the divisions straight out into their permanent positions if required. Basal cuttings in March. Harvest the shoots when they are about 10 - 15cm long with plenty of underground stem. Pot them up into individual pots and keep them in light shade in a cold frame or greenhouse until they are rooting well. Plant them out in the summer.

Cultivation of the herb: Hedgerows, woodlands and sunny waste ground.

Known hazards of Humulus lupulus: Skin contact with the plant causes dermatitis in sensitive people. Hops dermatitis has long been recognized. Not only hands and face, but legs have suffered purpuric eruptions due to hop picking. Although only 1 in 3,000 workers is estimated to be treated, one in 30 are believed to suffer dermatitis. Dislodged hairs from the plant can irritate the eyes.