Rhubarb, A Valuable Medicinal Herb.... And A Great Pie! 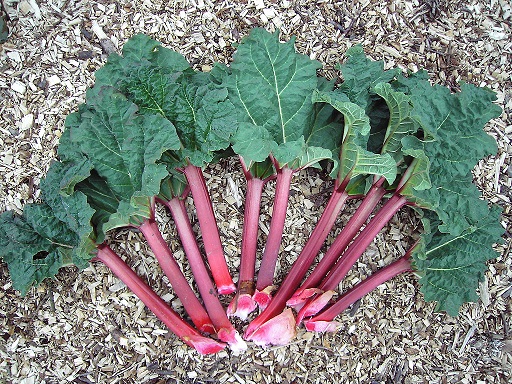 Last week’s article, Walnut, A Medicinal Herb Hiding In Plain Sight seemed to surprise a lot of people.  I suppose a lot of us take for granted the medicinal properties of common foods.  So, I thought it would be good to feature another medicinal herb hiding in plain sight today, Rhubarb, Rheum officinale.  Few people consider Rhubarb as anything more than an old fashioned pie ingredient, but it has centuries of medicinal use.  This member of the buckwheat family was once an exotic and expensive Asian herb, and only came into culinary use in the western world fairly recently.


The cultivation of Rhubarb began in China, and was first documented more than 1,800 years ago in The Divine Farmer’s Herb Root Classic.  It continues to be used medicinally in Traditional Chinese Medicine:


Dioscorides referred to Rhubarb as Rha:


Rha grows in places beyond the Bosporus, from where it is brought…. It is good (taken in a drink) for gaseousness, weakness of the stomach, all types of suffering, convulsions, spleen, liver ailments, inflammation in the kidneys, griping and disorders of the bladder and chest, matters related to hypochondria [indigestion with nervous disorder], afflictions around the womb, sciatica, spitting up blood, asthma, rickets, dysentery, abdominal cavity afflictions flows of fevers, and bites from poisonous beasts.


Perhaps amazingly, to modern readers,  Rhubarb was one of the most expensive imports to ancient Europe.  Trade routes were established to transport Chinese Rhubarb through Turkey Russia, along the “Silk Road.”  “The cost of transportation across Asia made rhubarb expensive in medieval Europe. It was several times the price of other valuable herbs and spices such as cinnamon, opium, and saffron. The merchant explorer Marco Polo therefore searched for the place where the plant was grown and harvested, discovering that it was cultivated in the mountains of Tangut province The value of rhubarb can be seen in Ruy Gonzáles de Clavijo's report of his embassy in 1403–05 to Timur in Samarkand: "The best of all merchandise coming to Samarkand was from China: especially silks, satins, musk, rubies, diamonds, pearls, and rhubarb . (en.wikipedia.org/wiki/Rhubarb).


Maude Grieves tells us in her A Modern Herbal, that Rhubarb was not cultivated in England until the late 1700s:


About 1777, Hayward, an apothecary, of Banbury, in Oxfordshire, commenced the cultivation of Rhubarb with plants of R. Rhaponticum, raised from seeds sent from Russia in 1762, and produced a drug of excellent quality, which used to be sold as the genuine Rhubarb, by men dressed up as Turks. The Society for the encouragement of Arts, Manufactures and Commerce exerted itself for many years in promoting the cultivation of Rhubarb, granting medals not only to this original pioneer, but also, some years later, to growers of Rhubarb in Somersetshire, Yorkshire and Middlesex, some of whom, it appears, attempted also to cultivate R. palmatum. When Hayward died, he left his Rhubarb plantations to the ancestor of the present cultivators of the Rhubarb fields at Banbury, where R. officinale is also now cultivated, from specimens first introduced into this country in 1873. Both R. Rhaponticum and R. officinale are at the present time grown, not only in Oxfordshire but also in Bedfordshire.

Plants for a future lists the modern medicinal uses of Rhubarb:


Rhubarb has a long and proven history of herbal usage, its main effect being a positive and balancing effect upon the whole digestive system. It is one of the most widely used herbs in Chinese medicine. The root is anticholesterolemic, antiseptic, antispasmodic, antitumor, aperient, astringent, cholagogue, demulcent, diuretic, laxative, purgative, stomachic and tonic. The roots contain anthraquinones, which have a purgative effect, and also tannins and bitters, which have an opposite astringent effect. When taken in small doses, it acts as an astringent tonic to the digestive system, whilst larger doses act as a mild laxative. The root is taken internally in the treatment of chronic constipation, diarrhoea, liver and gall bladder complaints, haemorrhoids, menstrual problems and skin eruptions due to an accumulation of toxins. This remedy is not prescribed for pregnant or lactating women, nor for patients with intestinal obstruction. Externally, the root is used in the treatment of burns. The roots are harvested in October from plants that are at least six years old, they are then dried for later use. A homeopathic remedy is prepared from the dried root. This is used especially in the treatment of diarrhoea in teething children.


It is unknown when the use of Rhubarb stems as a food became common in the western world, but all the old English books mention that the British climate made cultivating Rhubarb for the root extremely difficult.  The roots tended to rot… and the leaves can be toxic.  Plants for a future continues, “ Although no specific mention has been seen for this species, the leaves of some if not all members of this genus contain significant quantities of oxalic acid and should not be eaten in any quantity. Oxalic acid can lock up certain minerals in the body, especially calcium, leading to nutritional deficiency. The content of oxalic acid will be reduced if the plant is cooked. People with a tendency to rheumatism, arthritis, gout, kidney stones or hyperacidity should take especial caution if including this plant in their diet since it can aggravate their condition.”  Mrs. Grieves mentions that the early English Rhubarbs were often grown ornamentally.

Although this plain, unassuming vegetable had been a staple of British cooking for some time, it wasn’t until 1837 that the plant truly took the English-speaking world by storm. In fact, the introduction of this quirky coronation commemorative marked the beginning of what would be a long and passionate love affair between the Victorians and rhubarb.


They put rhubarb in everything. Jams, jellies, pies, custards, fools and puddings. And while rhubarb is generally treated as a fruit, it also made many popular appearances in recipes of the day as a savory ingredient, frequently paired with meats and cheeses in stuffings and sauces.


According to the New England Historical Society (newenglandhistoricalsociety.com), “Rhubarb originally had a medicinal use as a purgative and laxative. Not until the American Revolution ended was it used in pies. Then in the early 19th century an unnamed genius renamed it ‘pie-plant,’ and rhubarb took off.”  The author speculates that the cause of Rhubarb’s popularity may have been that it was one of the first, fresh spring vegetables available, after long, hard winters of stored root vegetables and salted meats.


In modern times the Rhubarb, whose value was once comparable to silks, satins, diamonds and pearls, is often overlooked.  That is a shame, because it is still good medicine and makes an excellent pie, especially combined with strawberries…. I think that calls for a pie recipe!


This one looks fantastic… I’ll just use the pic, so you have to go to her site for the recipe: cheflindseyfarr.com/2013/05/strawberry-rhubarb-pie/ 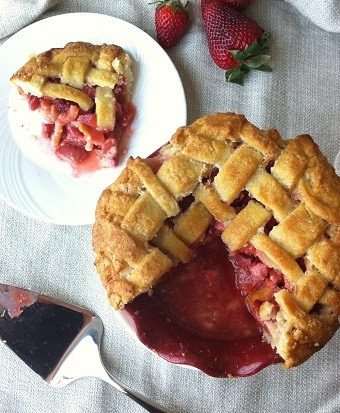 posted 2 weeks ago
I think the rise in popularity of Rhubarb coincided with the availability of cheap(er) sugar to the UK. If you blanch the plant in early spring it really does make a difference however: much sweeter and paler coloured, although the variety also can make a big difference.  It can be used as a tart (sour) vegetable as well: a little stuffed into oily fish like mackerel is quite nice.
Rhubarb and ginger is a classic pairing, I made some R&G gin liqueur last year which was much better than commercial ones I've tried.

Nancy Reading wrote:I think the rise in popularity of Rhubarb coincided with the availability of cheap(er) sugar to the UK. If you blanch the plant in early spring it really does make a difference however: much sweeter and paler coloured, although the variety also can make a big difference.  It can be used as a tart (sour) vegetable as well: a little stuffed into oily fish like mackerel is quite nice.
Rhubarb and ginger is a classic pairing, I made some R&G gin liqueur last year which was much better than commercial ones I've tried.

I think you are right about that - the Brits were ingesting TONS of sugar back then!  That sounds like a great liqueur ... I will have to try that!