Are my worms lazy, or am I expecting too much?

I've been trying to get worm composting working for a while now, and haven't been that impressed by the output so far. I bought a multi-tier plastic bin system (about 18" square with 4 4" tiers) with drain holes at the bottom of each tier along with a pack of worms.

I've been feeding the top & draining the bottom & once the top tray gets full, emptying out the bottom. I've not been keeping records, but I think I swap round the tiers about once a month, so it'd be around 3 months of composting to get my end result. However, what I get out is not particularly impressive - it's a gooey sludge mess rather than the super-fine compost some folks seem to get (see pictures). As far as I can tell, there are plenty of worms, but they're not processing the kitchen waste very well.

Initially I was worried that it wasn't draining out the bottom well. There's a tap at the bottom to allow worm tea to be drained off & I left it open for a few months to see if that helped, but it didn't seem to make much difference.

Input is kitchen waste (including coffee grounds & tea). We're relatively careful with what waste goes in - e.g. no citrus - but I've not been adding much else. I tried adding torn-up newspaper, but that didn't seem to get broken down at all. Any thoughts on what the problem might be here? Happy to provide any more info if the above isn't enough! 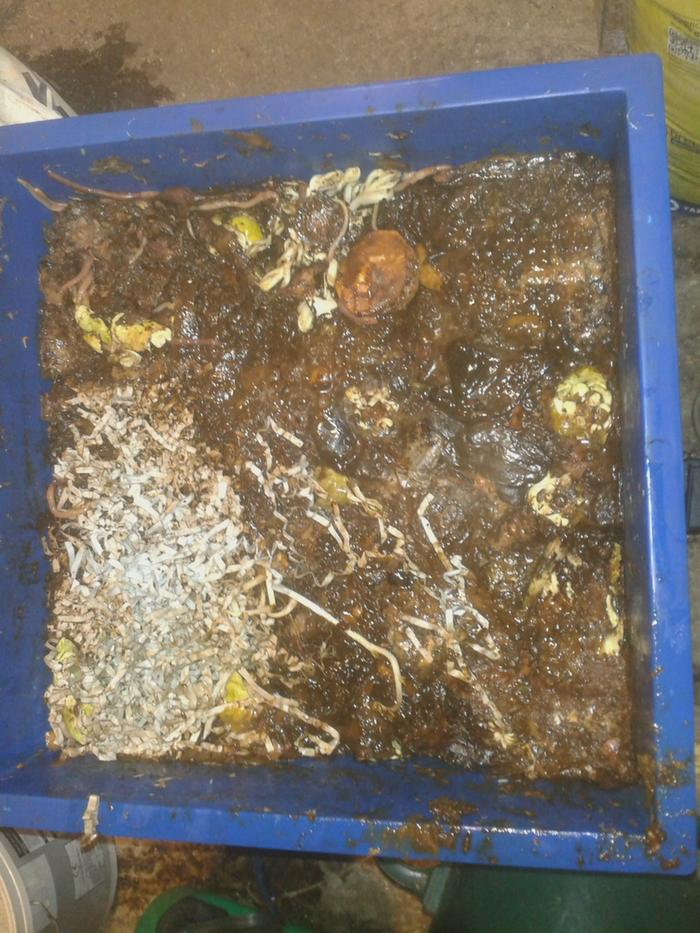 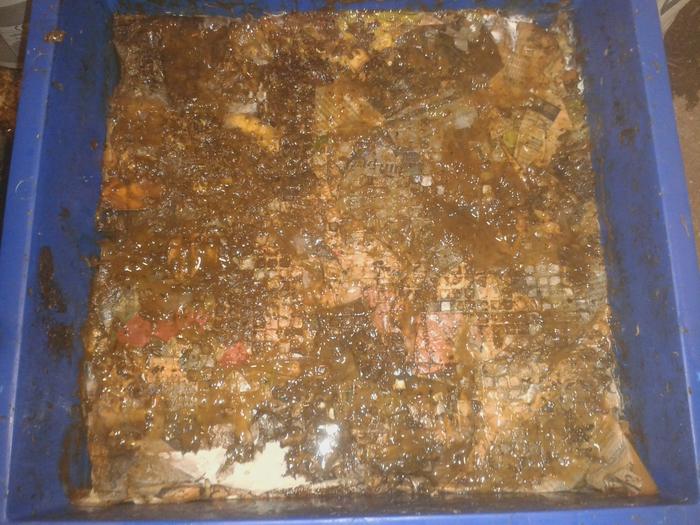 greg mosser
pollinator
Posts: 464
Location: the mountains of western nc
112
I like...

posted 2 weeks ago
definitely need more browns! paper or leaves or something. they can process a lot more greens when they have enough browns to balance them. when i was keeping worms i would mix newspaper (or sometimes leaves) in, not sure if that’s why your worms are ignoring the paper or not.
Steve Harvey
Posts: 209
Location: Ontario
12
posted 2 weeks ago
Did you put gravel or something over the tap so the tap doesn't get clogged? Looks pretty soupy which is not good for worms. I would recommend using wire mesh, gravel, and some filter cloth on the very bottom so that moisture can flow through the gravel and go through the tap without clogging the tap.

posted 2 weeks ago
We started off with a similar worm tower thing and it ended up being too small for us. It would be full before the bottom layer was finished, and the tap at the bottom clogged often.

We ended up making another bin out of a plastic storage tub by drilling holes in the bottom and setting it on a drainage tray. The bigger bin worked a lot better and there was hardly any drainage. We would let it fill up and empty in spring and fall. It would seem to be getting full, but as the worms ate everything it magically never filled up.

I agree that your bin looks very wet. I used newspaper shredded to a half inch to one inch strips and any other paper from around the house. If an area of our bin was too soggy, we would mix the paper in until it was not dripping anymore. Nowadays, I like to add the paper directedly into our table top compost bucket so that it's already a good moisture balance when we add it to the worm bin, which is an old bathtub now.

When we first got worms, it took a few months for the population to increase to fill up the bins with worms. I don't remember how long their life cycle is, but it's at least a few weeks. Have you noticed any eggs or small, young worms? You may need to slow things down until the worms have enough babies to match your composting needs. In any given handful from our bin, we could probably find 20 or so worms of all sizes.

The worms will work faster the warmer they are, so if it's possible to move them somewhere a little bit warmer they might speed up. We kept ours in the furnace room when we lived in Vermont.

Amy Arnett wrote:... when we add it to the worm bin, which is an old bathtub now.


A brief pause, to contemplate the awesomeness of this ... :-)
Keith Odell
pollinator
Posts: 111
Location: Indiana
16
posted 2 weeks ago
Response to your title - Neither.  Your setup isn't ideal yet, so you are not getting ideal results - yet.
I use 10x to 20X browns to greens.  The browns are what give the things the worms eat, energy.
And my opinion is that if you are getting liquid out of the bottom, you are over feeding and under bedding.
Lots of shredded cardboard or newspaper will sop up the liquid and set the table for your worms to feast.
It will also contain the smell and fruit flies.

As far as what good compost looks like.
I can take your sludge. Set it in a cardboard box for a day to reduce moisture.
Then run it through a sifter and you wouldn't believe it was the same stuff.

The great thing about worm composting is that you don't have to tweak it much to get drastically better results.
You haven't killed them, so adding some browns will dry things out a little and will increase their productivity a lot.
Good luck.

Alastair Palmer
Posts: 5
posted 1 week ago
Thanks for the comments folks - I'll try adding a bunch of extra browns & see how I get on.

@Keith - I've been letting the sludge dry out by just dumping it on to an unused garden bed, but hadn't thought of sifting it. I'll try to give that a go next time I shuffle the bins round.
J Nuss
Posts: 16
2
posted 1 week ago
To add to the good advice Keith had, the worms lay their cocoons on the brown material.  I use newspapers that I collect for free and basically rip them into strips, and bags of shredded paper I get from a lawyer.

I’ve had two worm “bag” bins for many years now. I add lots and lots of paper compared to scraps. I just add a big layer of paper and dump the scraps into it.  I’m not careful at all of what scraps I add. I have found that whatever I put in the bin will germinate prolifically coming out the the other end (the worm bag systems are harvested from the bottom, so if you don’t want peppers, tomatoes, and melon/squash seeds to come up everywhere you use compost, avoid those seeds).  I even had a mango pit germinate and it started growing when I potted it up.  I’m in zone 5 so didn’t have much use for it and it died from neglect (no water).  My biggest problem is the opposite of yours, needing moisture input so it doesn’t dry out.  However, my favorite way to use the worm bins is to just place a 5 gallon bucket under it, loosen the opening so some material can fall into the bucket, and the pouring a 5 gallon bucket of rain water through the worm bin.  I’ll then let that brew for two or three days and use to water.  My other “problem” is red mites, but I’ve long since given up worrying about them, and figure they are just doing much the same as the worms.  The worms don’t seem to care about them so neither do I anymore, after spending too much time and worry trying to eliminate them (impossible).  Now, if there is a seething mass of them covering everything, I will just sprinkle some diatomaceous earth over the top of the bin.  This also helps the worms, because they need some “grit”