Senna, A Laxative Herb And More 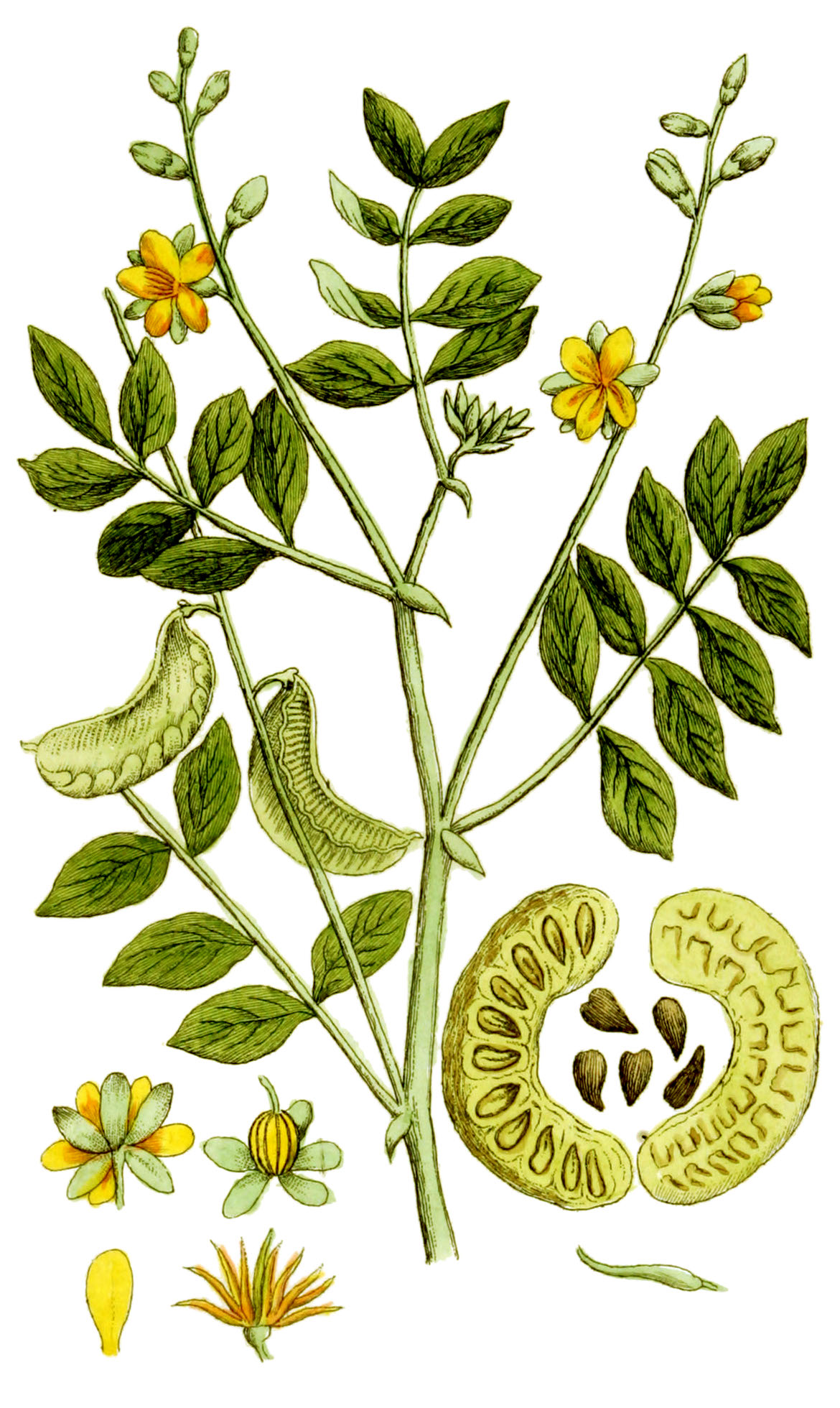 Senna is a medicinal herb familiar to most.  Modern man, much like our ancestors, generally keeps the laxative herbs in his medicine cabinet.  Among those will generally be found, Senna Cassia acutifolia, Psyllium (the seeds of plantain) and the infamous Castor Oil… a fascinating herb in its own right, as the Castor plant produces not only a useful laxative, but also the deadly poison, Ricin.  The use of Senna finds its heritage in ancient Egypt.  However, it is surely the English, whose love of laxatives reached almost a cultural fervor, who wrote most about its use.  Both the Safflower I wrote about last week, and the Rhubarb the week before, found their way into our western herbal lexicon through their popularity as laxatives among the Brits.

It has long been noted by herbalists and medical historians that differing cultures seem to place special attention on certain maladies.  The French place emphasis on liver health, the Germans on heart health, the Chinese on sexual function, etc. Only a century ago, indigestion was an American obsession; advertisements stated, “Dyspepsia, the national disease”... soon to be replaced by ads for deodorants and toothpaste as marketing developed.   For the English, especially a few generations ago, the "national disease: was surely constipation.  Why this may be, one could attribute to the traditional English diet, lacking the raw vegetables, spices and olives loved by many in western Europe, the cabbages/kraut and pickles so much a part of the diets of their neighbors to the extreme north and east… and even the Scottish obsession with oatmeal or the odd fondness for leeks embraced by the Welsh.  English food was boiled and proudly “stodgy.”  That, of course is not meant as a criticism.  I’ll skip the sweets of tea time, but I love roast beef, “bubble and squeak”, shepherd’s or cottage pie, pasties, scotch eggs, yorkshire pudding, brown gravy, real beer, bangers and mash, “nips and tatties”, fish and chips, mushy peas and the masterpiece known as the full English breakfast!  However, such fare is not ideal for bathroom regularity.


So, dispensing with the herbal lore of the ancients, lets see how the English herbalists described Senna, and the “virtues” to which they attributed the plant.


It is under Mercury. The leaves (which are not only used) are hot and dry, of a purging faculty, but afterwards leaves a binding quality. It opens obstructions: corrected with carroway-seed, aniseed, or ginger, a drachm taken in wine, ale, or broth, fasting, comforts and cleanses the stomach, purges melancholy, choler, and phlegm from the head and brain, lungs, heart, liver, and spleen, cleansing those parts of evil humours; strenthens the senses, procures mirth, and is also good in chronic agues, whether quartan or quotidian. It cleanses and purifies the blood, and causes a fresh and lively habit of the body, and is a special ingredient in diet-drinks, and to make purging ale for clarifying and cleansing the blood. The bastard sena works very violently both upwards and downwards, offending the stomach and bowels.

Medicinal Action and Uses---Purgative. Its action being chiefly on the lower bowel, it is especially suitable in habitual costiveness. It increases the peristaltic movements of the colon by its local action upon the intestinal wall. Its active principle must pass out of the system in the secretions unaltered, for when Senna is taken by nurses, the suckling infant becomes purged. It acts neither as a sedative nor as a refrigerant, but has a slight, stimulating influence. In addition to the nauseating taste, it is apt to cause sickness, and griping pains, so that few can take it alone; but these characteristics can be overcome or removed, when it is well adapted for children, elderly persons, and delicate women. The colouring matter is absorbable, and twenty or thirty minutes after the ingestion of the drug it appears in the urine, and may be recognized by a red colour on the addition of ammonia.

The addition of cloves, ginger, cinnamon, or other aromatics are excellent correctives of the nauseous effects. A teaspoonful of cream of tartar to a teacupful of the decoction of infusion of Senna, is a mild and pleasant cathartic, well suited for women if required soon after delivery. Some practitioners add neutral laxative salts, or saccharine and aromatic substances. The purgative effect is increased by the addition of pure bitters; the decoction of guaiacum is said to answer a similar purpose. Senna is contraindicated in an inflammatory condition of the alimentary canal, hemorrhoids, prolapsus, ani, etc. The well-known 'black draught' is a combination of Senna and Gentian, with any aromatic, as cardamom or coriander seeds, or the rind of the Seville orange. The term 'black draught,' it is stated, should never be used, as mistakes have been made in reading the prescriptions, and 'black drop' or vinegar of opium has been given instead, several deaths having been caused in this way.

SENNA PODS, or the dried, ripe fruits, are official in the British Pharmacopceia, though the quantity is restricted, as an adulterant, in the United States Pharmacopoeia.

They are milder in their effects than the leaflets, as the griping is largely due to the resin, and the pods contain none, but have about 25 per cent more cathartie acid and emodin than the leaves, without volatile oil. From 6 to 12 pods for the adult, or from 3 to 6 for the young or very aged, infused in a claret-glass of cold water, act mildly but thoroughly upon the whole intestine.

However, John Gerard gives us the most complete description of Senna’s “virtues” in his Elizabethan text:


A. It voideth forth phlegmatic and choleric humours, also gross and melancholic, if it be helped with something tending to that end.

B. It is a singular purging medicine in many diseases, fit for all ages and kinds.

C. It purgeth without violence or hurt, especially if it be tempered with Anise seed or other like sweet smelling things added, or with gentle purgers or lenitive medicines. It may be given in powder, but commonly the infusion thereof is used.

D. The quantity of the powder is a dram weight, and in the infusion, four, five, or more. It may be mixed in any liquor.

E. It is in the decoction or in the infusion tempered with cold things in burning agues and other hot diseases: in cold and long infirmities it is boiled with hot opening simples and such like; or else it is steeped in wine, in which manner, as familiar to man's nature, it draweth forth gently by the stool, almost without any kind of pain, crude and raw humours.

F. Most of the Arabians commend the cods, but our physicians the leaves rather; for unless the cods be full ripe they engender wind; and cause gripings in the belly. For they are oftentimes gathered before they be ripe, and otherwise easily fall away being shaken down by the wind, by reason of their weak and slender stalks.

G. Some also think that Senna is hurtful to the stomach, and weakeneth the same, for which cause they say that Ginger or some sweet kind of spice is to be added, whereby the stomach may be strengthened. Likewise Mesue noteth that it is slow in operation, and therefore sal-gem is to be mixed with it. Moreover, Senna purgeth not so speedily as stronger medicines do.

H. Notwithstanding it may be helped not only by sal-gem, but also by other purging things mixed therewith, that is to say with simple medicines, as Rhubarb, Agaric, and others; and with compounds, as that which is called Catholicon, or the electuary Diaphanicon, or that which is made of the juice of roses, or some other, according as the condition or quality of the disease and of the sick man requireth.

I. The leaves of Senna are a familiar purger to all people, but they are windy, and do bind the body afterwards, very much disquieting the stomach with rumbling and belching: for the avoiding of which inconvenience there must be added cinnamon, ginger, aniseed, and fennel seed, raisins of the sun, and such like that do break wind, which will the better help his purging quality.

K. Senna doth better purge when it is infused or steeped, than when it is boiled: for doubtless the more it is boiled the less it purgeth, and the more windy it becometh.

L. Take Borage, Bugloss, Balm, Fumitory, of each three drams, Senna of Alexandria very well prepared and pounded, two ounces, strew the powder upon the herbs and distil them: the water that cometh thereof reserve to your use to purge those that live delicately, being minisetred in white wine, with sugar, in condited confections, and such dainty ways, wherein delicate and fine people do greatly delight: you may also (as was said before) add hereunto according to the malady, divers purgers, as Agaric, Myrobalans, &c.

M. The powder of Senna after it is well prepared two ounces, of the powder of the root of Mechoacan four drams, powder of Ginger, Anise seeds, of each a little, a spoonful of Anise seeds, but a very little Ginger, and a modicum or small quantity of sal-gem: this hath been proved a very fit and familiar medicine for all ages and sexes. The patient may take one spoonful or two thereof fasting, either in pottage, some supping in drink, or white wine. This is right profitable to draw both phlegm and melancholy from the breast and other parts.

N. The leaves of Senna and Camomile are put in baths to wash the head.

O. Senna opens the inward parts of the body which are stopped, and is profitable against all griefs of the principal members of the body.

P. Take Senna prepared according to art one ounce, ginger half a quarter of an ounce, twelve cloves, fennel seed two drams, or instead thereof cinnamon and tartar, of each half a dram, powder all these; which done, take thereof in white wine one dram before supper, which doth marvellously purge the head.

Q. Handle Senna in manner above specified, then take half an ounce thereof, which done, add thereto sixty raisins of the sun with the stones picked out, one spoonful of Anise seeds brayed, boil these in a quart of ale till one half be wasted, and while it is boiling put in your Senna: let it stand so till the morning, then strain it, and put in a little ginger: then take the one half of this potion and put thereunto two spoonfuls of syrup of roses: drink this together, I mean the one half of the medicine at one time, and if the patient canot abide the next day to receive the other half, then let it be deferred until the third day after.

R. Senna and Fumitory (as Rasis affirmeth) do purge adust humours, and are excellent good against scabs, itch, and the ill affection of the body.

S. If Senna be infused in whey, and then boiled a little, it becometh good physic against melancholy, cleanseth the brain and purgeth it, as also the heart, liver, milt, and lungs, causeth a man to look young, engendereth mirth, and taketh away sorrow: it cleareth the sight, strengtheneth hearing, and is very good against old fevers and diseases arising of melancholy.


May we assume that Senna is a good laxative?  Yes. That said, it is not my “go to.”  Home brewed kombucha will certainly keep one “regular” at the amount of around 1 cup in the morning on an empty stomach.  Two cups of sour, plain Kombucha is “a most effective purgative”... basically, it will kick you in the guts for an hour or two until you are “well and truly purged.”  My recommendation would be somewhere in the middle, if you can stay home and be “ready to go!”