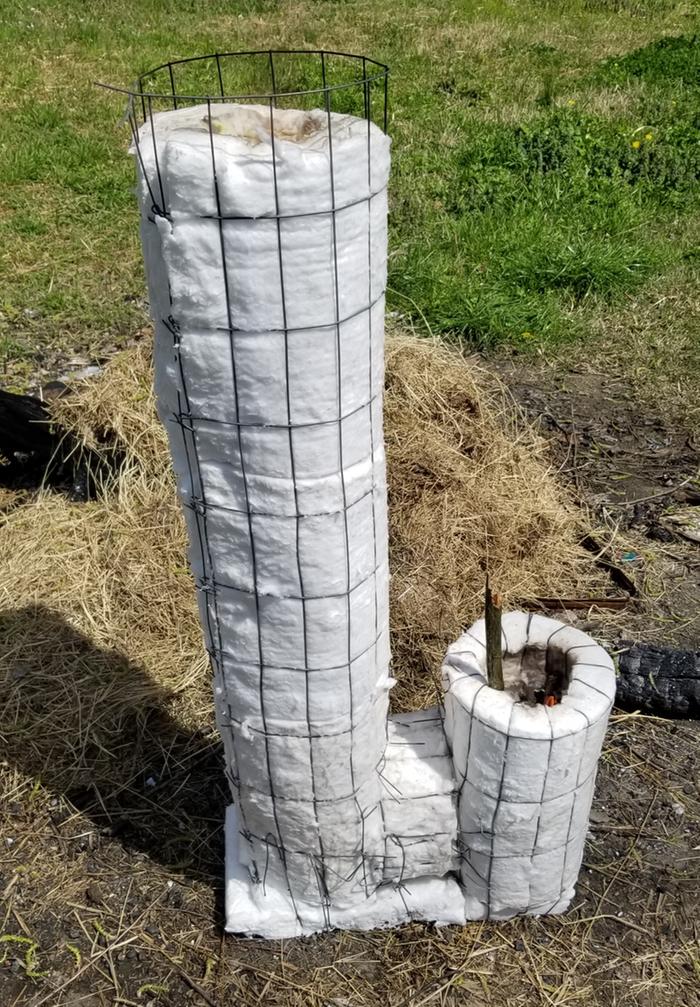 posted 10 months ago
I ran it about an hour on twigs and sticks that survived our burn pile.  It smoked just a few times but I'm not sure if it was a wet stick or too many in at once.  If not for the metal "cage" holding it together I could have picked it up with some garden gloves.

posted 10 months ago
That's a nice looking J tube you got there, I wonder if you could line the inside of the feeding tube and burn tunnel with firebrick splits, pretty cool though way to go on scoring the insulation, I know that is expensive!
paul wheaton
steward

posted 10 months ago
I think you'll want to use firebrick splits for the combustion chamber, otherwise (I think) you'll have issues cleaning out the ash which accumulates, especially without damaging the material. Perhaps sizing the combustion chamber a bit larger, so you can lay splits along the bottom at the very least, so removing ash is easier and sticks won't dig in. I would fear that your wood will eventually snag in the feed tube and not drop down.

Is the goal to use this to cook, or just to burn the wood without using the heat output for anything?

posted 10 months ago
my apologies for posting all that in the wrong forum.

the insulation is 2" ceramic fiber blankets salvaged from being trashed at work.  I rolled it around a 4 1/2" od PVC pipe then secured it with some 2x4 wire fencing.
the dimensions on the inside are 12" feed, 16" burn 36" riser.  I had originally planned on a 31.5" riser so that it could be inside a barrel I have but I got tired of cutting that ceramic blanket with a pair of scissors.
It has was supposed to have a 1 CSA gap at the top. between barrel and riser, but I stopped short of including the barrel.  I worked backward from there with some formula I found in a partial JPG  of the Wisner's 6" annex RMH.

I want to use it as is as a testbed for making it run for extended periods off of a feed hopper.  I have a large quantity of pellet stove pellets that came with the house we are in. after the "snowpocalypse" we just went through here I wanted to know if I could get a non electric alternative ready as a backup.  I don't think my house is going to stand much of a mass inside for storing and distributing heat, but if I can get some duct and a barrel It will make for some good quick heat.  the pellet stove I have has a chimney that is between 3 and 4 inches, so a little too small for what size I made so I will have to replace it or run a second.  im not sure if I want to give up on it just yet.

cleaning something like this is a problem, except for that once it cooled I could pick it up and dump it.  can't do that with firebrick.

eventhough i have lived with fireplaces and now a wood stove indoors, I am concerned about a DIY project for heat that might not vent properly and leak carbon monoxide into the house.  If I could get a system that burned at a slow enough rate but for a long period of time, I could burn outdoors and have the heated air come through the wall, into  1 or 2 barrels then back out through the wall.   that would eliminate the drawing of warmed house air out through the chimney.  part of me wants to run the duct from the burn under the house near the kitchen pipes to help prevent freezing.  that idea lead me to perhaps two smaller rockets that heat up some under-house masses near the other vulnerable pipes so in cold enough weather  I could burn them to heat up small masses that will prevent freezing pipes without having to make one large system that could branch out to do it all.  then the idea of small systems lead me to want to make other small systems to warm the outdoor multitude of animals we have.  trying to keep 20 something rescued puppies / dogs warm in -2 deg. cold was a challenge.  our weather rarely gets down to the teens.

all of this was just me filling time until I could save up for the firebricks im going to need to make a more permanent installation.