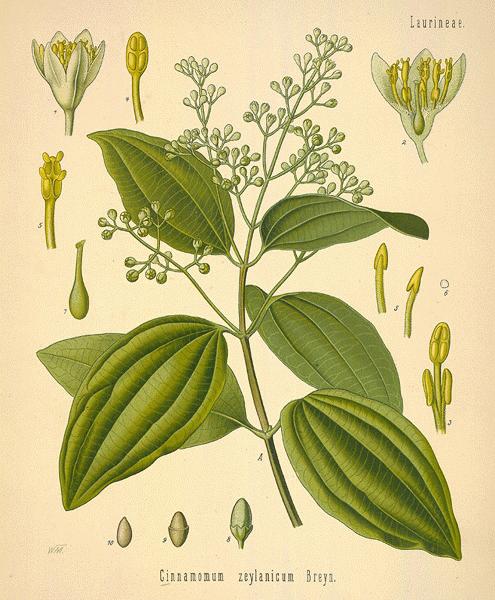 I feel safe in assuming that everyone is familiar with Cinnamon… but, did you know it is a medicinal herb as well as a spice often used in candies and cookies.  Cinnamon was once commonly used in herbal medicine and continues to be an ingredient in the “theriac” used in Swedish Bitters.  Mrs. Grieves listed Cinnamon’s medicinal actions as:

Carminative, astringent, stimulant, antiseptic; more powerful as a local than as a general stimulant; is prescribed in powder and infusion but usually combined with other medicines. It stops vomiting, relieves flatulence, and given with chalk and astringents is useful for diarrhoea and haemorrhage of the womb.

Perhaps the reason it is not more commonly listed in modern herbals is because it is difficult to tincture.  A tincture of Cinnamon quickly turns into a mucilaginous, glue-like mass that is remarkably unappealing and hard to use.  Herbalist, Michael Moore found Cinnamon useful for, “Tonsillitis pain (as a tea). Chronic mild hemoptysis, from morning coughing. General hemorrhage. Mild GI hemorrhage, subacute or chronic, with ache or no pain. Bleeding ulcers. Post-partum hemorrhage, passive from lack of contraction.”


What of the “theriac”, well, that is a fascinating subject on its own.  It seems that in the ancient world, poisoning was a common way to get rid of one’s political rivals.  Wikipedia gives the following history:


According to legends, the history of theriac begins with the king Mithridates VI of Pontus who experimented with poisons and antidotes on his prisoners. His numerous toxicity experiments eventually led him to declare that he had discovered an antidote for every venomous reptile and poisonous substance. He mixed all the effective antidotes into a single one, mithridatium or mithridate. Mithridate contained opium, myrrh, saffron, ginger, cinnamon and castor, along with some forty other ingredients. When the Romans defeated him, his medical notes fell into their hands and Roman medici began to use them. Emperor Nero's physician Andromachus improved upon mithridatum by bringing the total number of ingredients to sixty-four, including viper's flesh a mashed decoction of which, first roasted then well aged, proved the most constant ingredient Lise Manniche, however, links the origins of theriac to the ancient Egyptian kyphi recipe, which was also used medicinally.


Greek physician Galen devoted a whole book Theriaké to theriac. One of his patients, Roman emperor Marcus Aurelius, took it on a regular basis.


Fortunately, the modern Theriac contains only three ingredients: Valerian, Cinnamon and Cardamom.  Presumably though, the modern incarnation of this ancient panacea would be far less effective against poisons.


Cinnamon has been in common medicinal usage since at least 2,000 BC, when it was imported from China to Egypt as a royal gift, and was used to embalm mummies.  It is said to have been growing in Arabia by the Seventh Century, BC.

"Cinnamon is very hot and its power is great.  It holds a bit of moisture, but its heat is so strong that it suppresses the dampness.  It diminishes bad humors in the one who eats it often, and provides him with good humors.  The tree whose bark is cinnamon is very hot.  Whence a person who is paralyzed by gout, or has quotidian, tertian or quartan fevers should pour good wine into a steel vessel. He should put into it wood and leaves of this tree, while they still have sap in them.  After boiling it on a fire, he should drink it frequently.  He will be healed.  One whose head is very heavy and dulled, and who has difficulty breathing through his nose, should pulverize cinnamon and eat it often with a morsel of bread, or licked from his hand.  It dissolves the noxious humors which had dulled his head.”


The fevers Saint Hildegard mentioned were common in the ancient world, being regularly occurring fevers of a certain duration.  Even in more recent centuries, such was often associated with malaria.  Sir Walter Raleigh requested his execution proceed expediently as his malarial fever was so regularly timed that knew when it would re-occur.


A. Dioscorides writeth, that Cinnamon hath power to warm, and is of thin parts: it is also dry and astringent, it provoketh urine, cleareth the eyes, and maketh sweet breath.


B. The decoction bringeth down the menses, prevaileth against the bitings of venomous beasts, the inflammation of the intestines and reins.


C. The distilled water hereof is profitable to many, and for divers infirmities, it comforteth the weak, cold, and feeble stomach, easeth the pains and frettings of the guts and entrails proceeding of cold causes, it amendeth the evil colour of the face, maketh sweet breath, & giveth a most pleasant taste unto divers sorts of meats, and maketh the same not only more pleasant, but also more wholesome for any bodies of what constitution soever they be, notwithstanding the binding quality.


D. The oil drawn chemically prevaileth against the pains of the breast, comforteth the stomach, breaketh windiness, causeth good digestion, and being mixed with some honey, taketh away spots from the face, being anointed therewith.


E. The distilled water of the flowers of the tree, as Garcias the Lusitanian physician writeth, exclleth far in sweetness all other waters whatsoever, which is profitable for such things as the bark itself is.


F. Out of the berries of this tree is drawn by expression, as out of the berries of the Olive tree, a certain oil, or rather a kind of fat like butter, without any smell at all, except it tbe made warm, and then it smelleth as the Cinnamon doth, and is much used against the coldness of the sinews, all pains of the joints, and also the pains and distemperature of the stomach and breast.

G. To write as the worthiness of the subject requireth, would ask more time than we have to bestow upon any one plant; therefore these few shall suffice, knowing that the thing is of great use among many, and known to most.


H. Cassia used in a larger quantity serveth well for the same purposes which Cinnamon doth.


So, the next time you open your spice cabinet, pay a bit more attention to what medicinal herbs may be lurking there.  These, were the spices that fueled the international commerce of the ancient world, once as prized as precious jewels and fine silks.  They are also, more often than not, strong and useful medicinals.

I would stress that it is critical to be aware that these aren't mere foodstuffs.

I became very fond of cinnamon recently, and was on track to doing myself a sizeable injury over time. I try to keep it under two teaspoons a day now.

I would stress that it is critical to be aware that these aren't mere foodstuffs.

I became very fond of cinnamon recently, and was on track to doing myself a sizeable injury over time. I try to keep it under two teaspoons a day now.

My feeling on this is pretty much 'all things in moderation'. Many spices and herbs can be absolutely wonderful in therapeutic doses, but depending on the individual, the illness, and a host of other factors, a strong percentage of these wonderful, healing, highly beneficial foods can become detrimental, often for the very reasons they're so beneficial. There really is such a thing as 'too much of a good thing'!

Judson Carroll
Posts: 218
57
posted 4 weeks ago
My word, yes... to spoonsful a day is quite a lot!  It never occurred to me that anyone would want to eat so much.  I would certainly caution against nutmeg, as well.  I tried taking a large dose of that on advice of a certain book... MAJOR mistake, lungs on fire and the worst headache I've ever had!  Cloves can be very irritating to the digestive system in large amounts.  I use a lot of dangerous herbs - aconite, gelsemium, datura, etc in very small doses for certain treatments.... those, I would think to warn against!
Carla Burke
master gardener

posted 4 weeks ago
Nutmeg is also a hallucinogenic, in large doses. One of my best life-long friends and her husband (through a math mistake, in a recipe) inadvertently ingested about 3 tablespoons each, one evening. The effects lasted a few days, and while the effects weren't unpleasant, in and of themselves, it cost them several day's worth of pay, because neither of them could drive, much less function, at work. They did say the soup was phenomenally delicious, though.

Carla Burke wrote:Nutmeg is also a hallucinogenic, in large doses. One of my best life-long friends and her husband (through a math mistake, in a recipe) inadvertently ingested about 3 tablespoons each, one evening. The effects lasted a few days, and while the effects weren't unpleasant, in and of themselves, it cost them several day's worth of pay, because neither of them could drive, much less function, at work. They did say the soup was phenomenally delicious, though.


I experimented a lot as a kid... I didn't find nutmeg to be very hallucinogenic, but WOW did it hit me like a truck between the eyes!  What little effect it had was grinning and visual trails, maybe music was a bit enhanced.  But, the physical side effects were so miserable, I never tried it again and never would!