Cardamom, Medicinal Use Of The Queen of Spices

Judson Carroll
Posts: 218
57
posted 3 weeks ago
Cardamom, Medicinal Use Of The Queen of Spices
https://southernappalachianherbs.blogspot.com/2021/03/cardamom-medicinal-use-of-queen-of.html 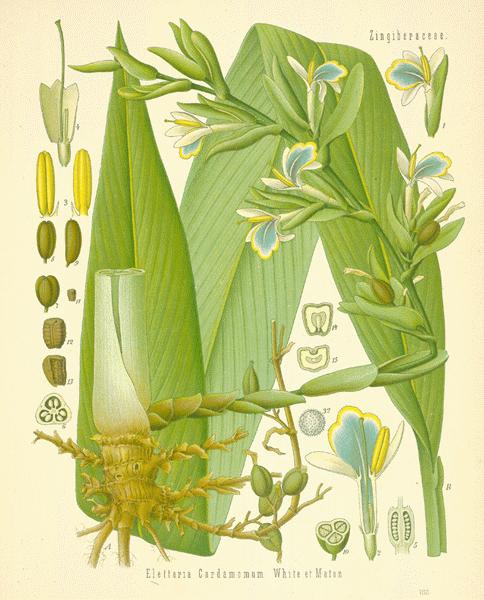 Cardamom is the third and final ingredient in the modern version of Theriac that is an ingredient in the Great or Large Swedish Bitters. Theriac, as discussed in last week’s article, was an ancient formula believed to be an anecdote to all poisons.  Like the Cinnamon discussed in that article, Cardamom is a spice that was far more used in the ancient world as a medicinal herb than it is now.

Cardamom originates in India and Indonesia; it has been used in Ayurvedic medicine for centuries.  Medicinal use of Cardamom was recorded in Sanskrit texts.  It was used in Egyptian medicine, recorded in the Ebers Papyrus..  It was highly valued and used medicinally by the ancient Babylonians and Assyrians, and was one of the main spices that led to the ancient Spice routes through the Persian Gulf, linking Asia to the Mediterranean nations.

A decoction (taken as a drink with water) is able to heat. It is good for those who have illness comitralis [possibly from comites — veins, arteries adjacent to nerves — mitralism — lesions on the heart], coughs, sciatica, paralysis, hernias, convulsions and griping, and it expels rectal worms. Taken as a drink with wine it is good for those who have defective kidneys and difficulty meiendi [urination]. It is also good for one who has been stricken by a scorpion and for all those hurt by the venom of other creatures. A teaspoonful (taken as a drink with bark from the roots of bay) breaks stones [kidney, urinary]. Taken as inhalations of smoke or fumes it is an abortifacient, and daubed on with vinegar it takes away parasitic skin diseases. It is also mixed in thick ointments and other antidotes..


Over more than 4,000 years of documented use, Cardamom has certainly gotten around.  Romans are said to have chewed Cardamom for tooth health and to have used it in perfumes. In Alexandria, it could be used to pay taxes. Vikings brought the spice back to their homeland, where it became popular in Scandinavian cuisine. The British secured colonial plantations to cultivate and export Cardamom.


Surprisingly, the British herbals make scant mention of Cardamom.  Mrs. Grieves discuses its cultivation and history, but states of its medicinal use only:


The seeds are helpful in indigestion and flatulence, giving a grateful but not fiery warmth. When chewed singly in the mouth the flavour is not unpleasant, and they are said to be good for colic and disorders of the head.


In flavouring they are combined with oils of Orange, Cinnamon, Cloves, and Caraway.


The substitution of glycerine for honey in the 1880 United States' formula for compound tincture increased its stability.

The Physician’s Desk Reference for Herbal Medicine lists Cardamom as:


...a cholagogue and has virustatic properties.  The essential oil of the drug is antibacterial and antimycotic.  In animal experiments the essential oil caused an increase in the secretion of bile and a reduction of gastric juice production.


Cardamom is also used in folk medicine for digestive complaints, vomiting and diarrhea, morning sickness and loss of appetite, as well as, Roemheld syndrome.


Indian Medicine: Cardamom is used for disorders of the urinary tract.


Although rarely used in modern herbal medicine, Cardamom remains the third most expensive spice in the world market.  Once called the “Queen of Spices”, it ranks just under vanilla and saffron in price, according to Amy Stewart, writing in A Drunken Botanist.  Isn’t herbal history fascinating?