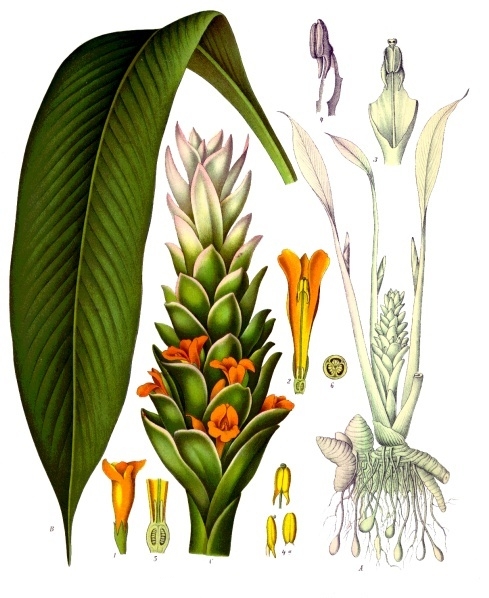 Last October, when I began writing about each of the ingredients in the Great or Large Swedish Bitters, it seemed almost an insurmountable task.  Officially, there are 22 herbs in the Great Swedish Bitters, but really there are 24, because Theriac is comprised of three herbs.  Many of these herbs took a lot of research as they are seldom used in modern herbal medicine as individual remedies.  The final ingredient though, is popular these days both as an herbal remedy and a spice used in foods.  It is Turmeric.

Interestingly, Turmeric does not appear often in older western herbals. It was, however, much used in the Asian and Indian traditions, having come into use around 2,600 BC..  It may well be that Turmeric, being so closely related to Ginger, was not much recognized as having unique qualities outside of the lands where it originated.  In many instances, it was used merely as a die plant for the golden robes of monks.  Most often though, it was used in food.  Turmeric is the essential spice in curries and many delicious, spicy dishes.


According to the Herbal Encyclopedia, traditional uses for Turmeric are:


In Chinese medicine, turmeric is used for chest pains, or pain in the rib, abdomen, or liver area, nose bleeds, vomiting with bleeding, and heat stroke. The rhizome is also used to treat certain types of tumors and in liver disease. Chinese research has proven zedoary's use in reducing cervical cancer and increasing the cancer-killing effects during radiotherapy and chemotherapy.


In India, zedoary is used for loss of appetite, tuberculosis, wounds, leukodermia, fever, bronchitis, and asthma; but it is used mainly as a stomachic for digestive problems and as a general body tonic.


Turmeric seems to have had some use in Greek medicine, but by 1100 AD. at least, Turmeric had become established in Western herbalism.  Saint Hildegard von Bingen wrote of Turmeric (Zedoary) seven times in her classic work, Physica.  This is likely how Turmeric came to be included in the Swedish Bitters. Saint Hildegard was particularly fond including her herbal remedies in spiced wines and cookies, so Turmeric was often mixed with Ginger, Cloves, etc.


These days, Turmeric is widely used as an anti-inflammant. It is particularly good against chronic inflammation.  However, the liver has difficulty processing Turmeric.  It is best absorbed in combination with black pepper and a natural fat.  Especially good is Cod Liver Oil, as it also has strong actions against inflammation.  Turmeric is anti-oxidant, as well.  These dual actions may make it useful against cancer, heart disease, arthritis.  Turmeric helps wounds heal and lowers cholesterol.  It is good for liver health and stimulates digestive secretions and blood supply to the digestive system.


According to the popular, Lost Book Of Herbal Remedies:


Improves Brain Function and Lowers Risk of Brain Diseases, Including Alzheimer’s Disease & Depression. Curcumin can increase the levels of brain-derived neurotrophic factor (BDNF), which is a growth hormone for the brain. Many brain diseases, including Alzheimer’s Disease and depression, are linked to decreasing levels of the BDNF hormone. Increasing BDNF levels with curcumin can effectively delay or possibly reverse many age-related brain function diseases. By increasing BDNF, curcumin may also improve memory and cognitive performance by increasing the growth of new neurons and fighting degenerative processes in the brain. Alzheimer’s disease is characterized by a buildup of amyloid plaques in the brain. Curcumin crosses the blood-brain barrier and helps clear these plaques. Long-term use is required.


Although Standardized Extract of Turmeric/Curcumin may be more useful than other forms taken in a capsule form, I think the best way to make use of Turmeric is to use it regularly in food and beverage.  I LOVE curries, but also use it in soups and chili, including it in everything from kimchi to chicken pot pie!  An easy way to have a dose of Turmeic is in my warming spice tea, which is made from one half teaspoon each of Turmeric, Black Pepper, Ginger and Cinnamon, with the addition of a few cloves.  I suppose that herbalists are not expected to recommend such things, but I’m a sausage fanatic and love a good hot dog or bratwurst.  Turmeric is what gives American mustard its bright color.  I prefer a good, pungent, whole grain, brown mustard or Dijon, but that doesn’t mean leaving the flavorful Turmeric off of my dogs!  I simply mix it in with the sauerkraut or chili sauce, or just dust it over the onions. Turmeric is remarkable in a pate of chicken or duck liver, as well. A popular pre-bedtime beverage called “golden milk” is another way to utilize Turmeric.  I have also found that it combines well with black strap molasses.


However you consume your Turmeric, enjoy it - it is flavorful and good for you!

Gabriel Goto
Posts: 10
Location: Champlain Islands VT and Adirondacks NY
1
6
posted 1 year ago
Excellent article! I have wanted to add turmeric to my diet. I tried capsules but was not happy with the retults.
Judson Carroll
author & pollinator
Posts: 827
Location: Blue Ridge Mountains
255
I like...

posted 1 year ago
Thanks!  I like it better as an ingredient.