making a quilt hut in a greenhouse

Annie Hope
Posts: 157
4
posted 3 weeks ago
I am desparate for a bit of living space to put a couple of beds and table in until I can rebuild my sleepout garage after it burnt in a fire.  The following lean-to greenhouse is already attached to our house to put a leaky food trailer under cover, and allow my son to be next to me while I cook commercial food in it.

The section on the left is 3m wide and 7m long including the garden on the left. It was intended to be a car port but I thought I could build a temporary box house out of 7mm ply, but  a 2.4 x 3.6m x 1.8m high hut is working out at least $500 uninsulated, and $1000 insulated.  (New Zealand prices).  I am wondering if I could just buy some second hand quilts and hang them from the horizontal rafters to make a flat roof and walls.  Otherwise, buy some old sheets and sew rockwool insulation onto it.  My main goal is privacy and insulation if it gets cold enough to need to turn on a fan heater.

We are in mid autumn on New Zealand, and it could be midwinter before I get the new sleepout built.  Frosts are frequent, but we are 8km from the sea, so our minimum temperature on record is -4c.  I also have plans to heat the whole greenhouse with passive heating and solar-heated hydronics and wood fire back-up, so I would rather keep this as cheap as possible.

Any suggestions on how well this should work? 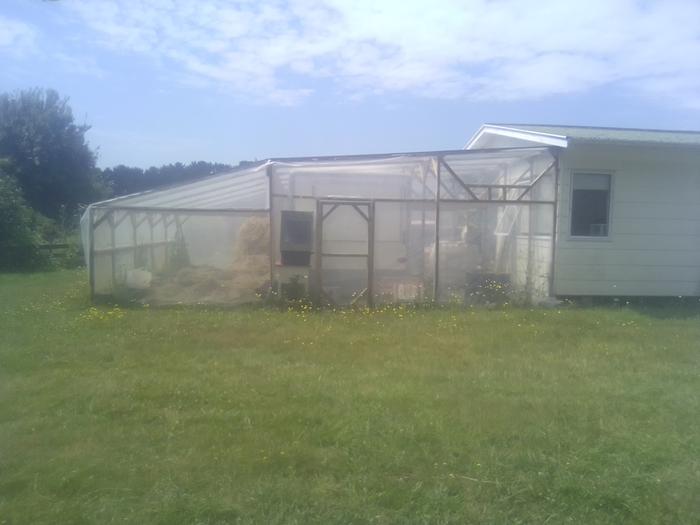 posted 3 weeks ago
I need to think about this, but off the top of my head, consider what fumes can potentially leak from the food truck - propane, CO or CO2 - that are a greater risk if you're asleep - and please budget for detectors and the batteries to operate them! Similarly, make sure you've got 2 clear easy paths to get out if there's a fire. That's why most codes say you have to have a window in a bedroom - second egress other than the door.

Annie Hope
Posts: 157
4
posted 3 weeks ago
Most of the food truck is on electricity, and I could turn of the gas bottle each night.  I was more worried about outgassing from the greenhouse film,but planned to install a small wall based HRV unit that vents outside the greenhouse.
Jay Angler
gardener

I could turn of the gas bottle each night.

That would be good. Motor homes have been known to go up like Roman Candles and the world needs every permie it can get!

So I'm thinking in terms of "camping". Multiple layers with an air gap in between - a tent plus a "fly" -  may work as well or better than something thick and insulated which could trap moisture inside it and promote mold. Wind will be stopped by the greenhouse plastic assuming there aren't a lot of vents that close poorly (some fresh air is a good thing).

With camping, a key thing is for sleeping bags to be stuffed first thing in the morning to push all the warm, moist air out - my concern if the greenhouse is growing plants will be the humidity. Our climate is very damp all winter, and we had to move a dehumidifier into the bedroom during the day to dry out the bedding. (I don't like the noise at night.) So I'm not sure from the picture where the bed will go and whether it's possible to put plastic between the plant area and the temporary bedroom. Similarly, cooking often produces a lot of steam from both food and washing up. Will the HRV unit deal with that?

Another thing we use is called a "bed warmer". It's sort of like an electric blanket except it's designed to go between the mattress and the mattress pad. They aren't cheap, but it puts the heat exactly where you need it. In really cold weather, I turn it on for an hour before bed so that it heats the bed and blankets and that also helps to make sure things don't feel damp. We overall use much less electricity with the bed warmer than if we tried to heat the air in the room. Of course you could look for the old-fashioned equivalent which is a special metal pan with a lid that they used to put hot coals from the fire in and rub it around under the blankets before climbing in. Another advantage of the bed warmer is that if I wake up cold at 4 am, I just push the button and it warms me up again. That's often all I need to get back to sleep easily.

So I suppose what I'm saying is that your idea has potential. Using a serious camping sleeping bag, rather than regular bedding might be necessary to make this work in weather that's giving you frost. A lot depends on the individual - I don't warm up easily once chilled and need an external heat source to do so, whereas my husband generally doesn't have a problem.

Possibly, rather than looking for second hand quilts, I'd watch for wool blankets. My gut feeling is that they'd do a better job.