Can anyone help me identify this old canner?

Posts: 2
posted 4 days ago
I recently acquired this old canner with the intention of restoring it, as I have with several other old canners. One might call me the crazy canner lady, I suppose. I called Presto to try and identify it, since it has literally NO markings on it anywhere. It is similar in size to my 21 1/2 quart All American, so I'm assuming it's around that weight. Although it looks very similar It is NOT the C21, because the dual petcocks are in different spots and it does not have a model number engraved on the lid. What's worse is Presto told me that this canner was too old to restore and I should just leave it alone, yet they sold me parts for a 90 year old No. 7 last year. Can anyone help me identify this so I don't have to give up on this project? Using it is not so much an issue as just wanting to bring it back to it's former glory.
IMG_20210504_121428.jpg 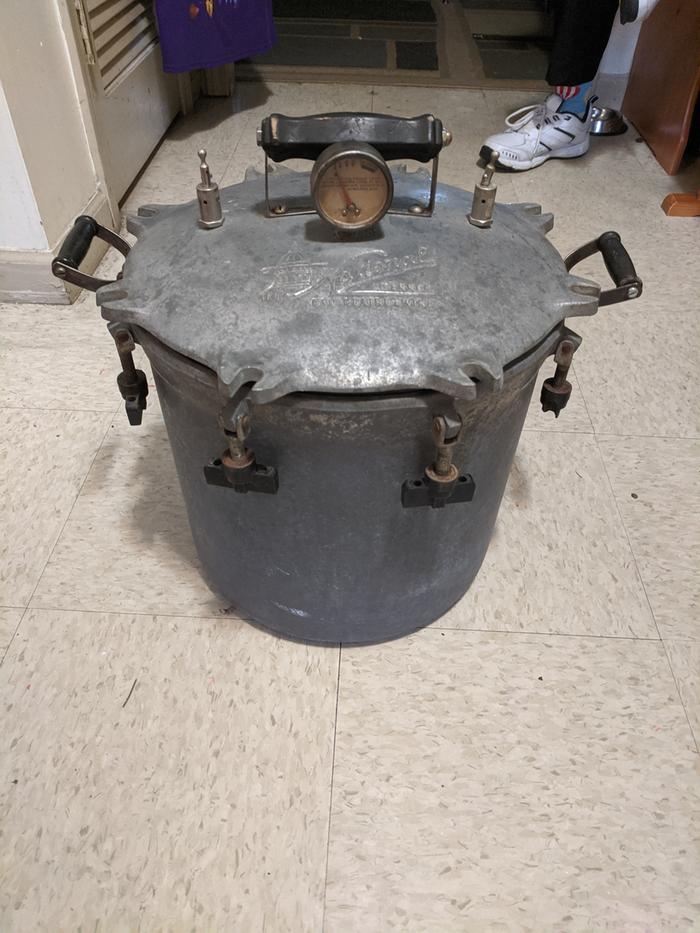 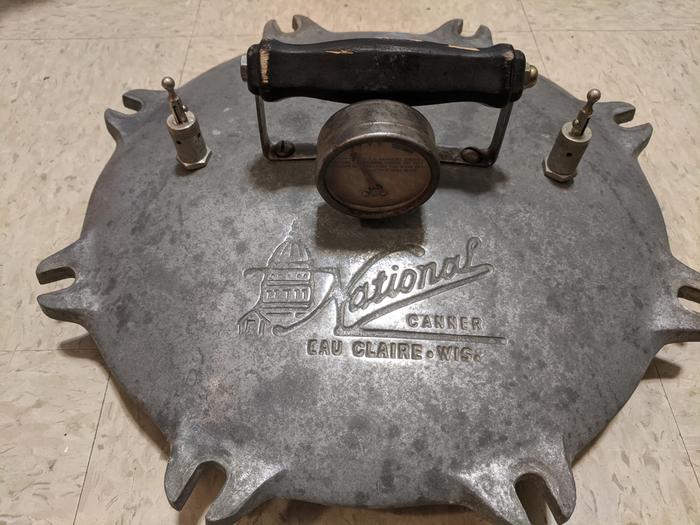 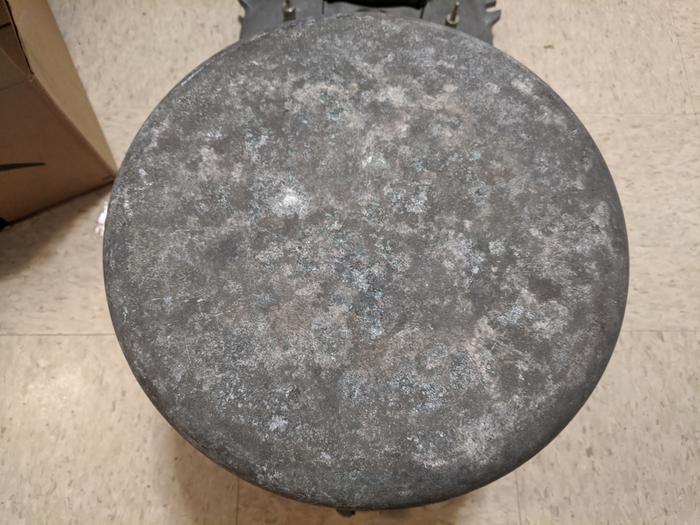 Larisa Walk
pollinator
Posts: 298
Location: South of Winona, Minnesota
61
posted 4 days ago
I think it may be a predecessor to Presto? I remember about 40 years ago that there was a big Presto building along the highway in Eau Claire, WI. Maybe this was made there?
John F Dean
gardener

posted 4 days ago
It seems to be a Presto. I have no idea as to the exact model.  I doubt that it matters.  Swap out the pressure gauge....either with another gauge or a weight.  I am wondering about replacing one of the pressure release valves with a rubber plug. My experience has been that the plugs are pretty universal.... I have only encountered 2 sizes. Besides, they are pretty inexpensive.  I would try to replace it. Be sure to examine the canner closely for damage.  But I have never encountered one with serious problems.   Then put some water in the thing and see if it hold pressure. Be sure not to get too close to it during your initial test.  I would take it is steps of 5 pound first ....cool down and examine....then 10 pounds. Lehman’s carries spare parts as does Red Hill General Store. I keep a drawer of various parts for the various canners I have.  Most of the parts I have  fit all the canners regardless of brand.

posted 4 days ago
You have a great piece of American canning history even if you cannot restore it.

I thought it might be a C25 though I cannot find a picture of it.

I did a little research and found this recipe book which is a bulletin put out by the National Canners Association Research Laboratory dated 1936.

It is for Cafeterias and Restaurants and it might be for the C25.

posted 4 days ago
Very cool.  I live not far from Eau Claire, I would love to have one just for the historical significance.

Posts: 2
posted 3 days ago
Well, it's a National, but Presto bought out National around WWII, so they're basically the same. In fact, when you call the Presto division of canning customer service, they say "National Presto".

Thank you for the warm welcome and for the amazingly helpful responses! I will apply them in my research today. So, here's another question....to restore or not to restore? I got in a heated debate with my 15 year old know-it-all son and he says it would be criminal to remove the patina and shine this old canner up. I'm just dying to do it, though, and make a YouTube video restoration of the entire thing. I have pics of the 2 others that I've restored. What would you all do?
IMG_20210412_231207.jpg 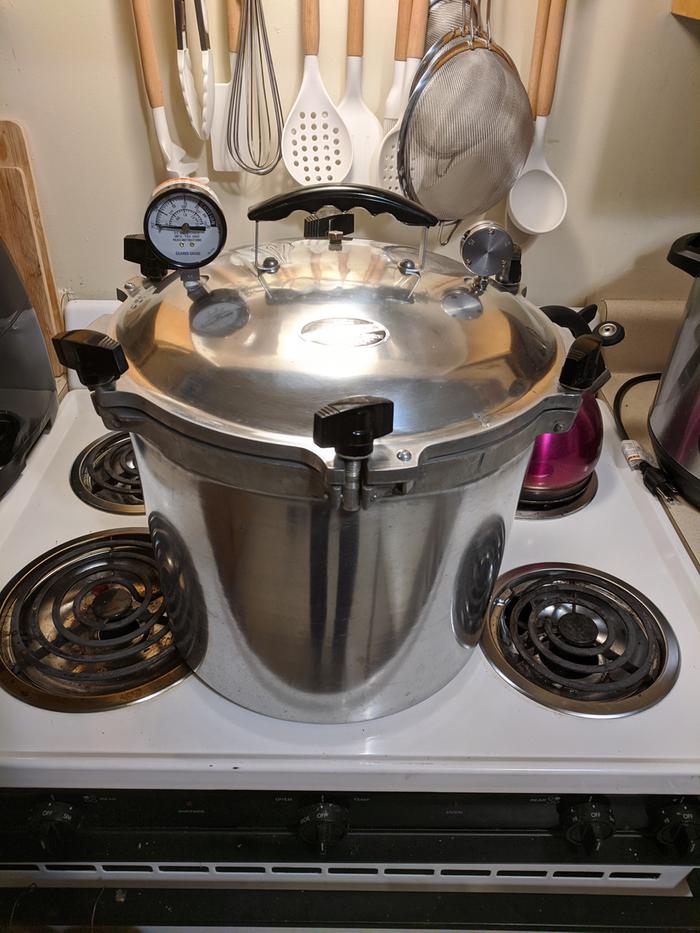 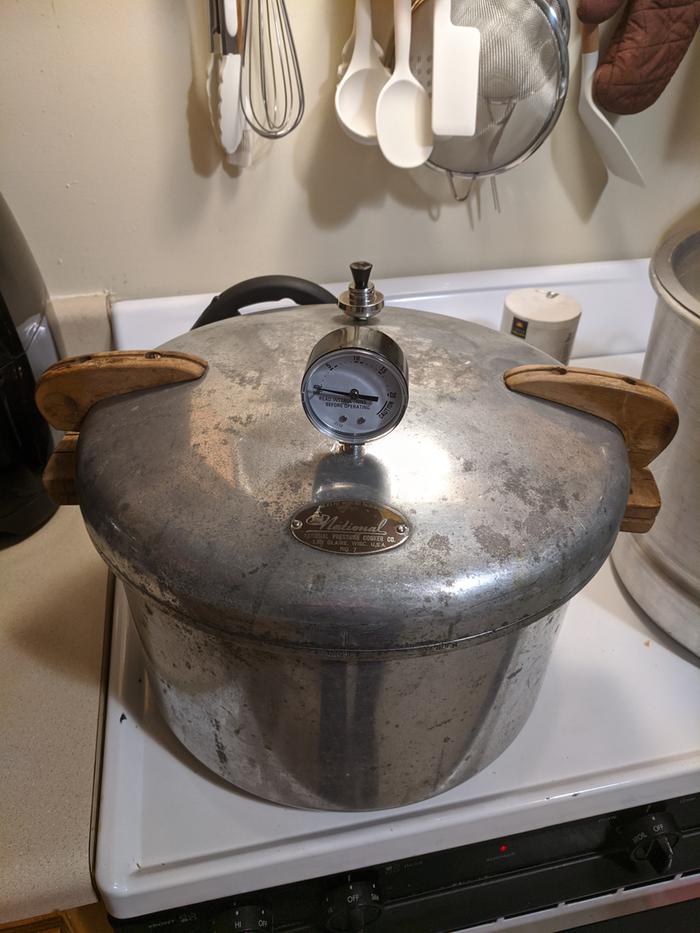 posted 3 days ago
That's a very nice canner!  Is it, as it appears to be, of the type where the edge of the lid is slightly tapered and seals metal-on-metal when you screw down the dogs, no gasket required?

In 2016 I bought a pre-WWII canner from a garage sale to use for cooking dogfood.  I got a ton of use out of it! I tested it the way John Dean suggests, and then I just never made a habit of standing too close to it.  But the inevitable day came when I got called outside while it was under pressure for some minor crisis, then utterly forgot and went on to my next project.  Ultimately it ejected about half the contents of the pressure cooker in a fine gray burnt-smelling malodorous spray out the vents of the pressure relief valve, thus proving that as a safety device, the valve has much to recommend it.  My testing had revealed that the vent would begin to puff steam at 22psi, to whatever extent the pressure gage can be trusted.  I figure it was a bit higher than that by the time it began forcing chicken and rice through the holes in the pressure relief value.  Overall, the episode reinforced my belief that these old canners were engineered to an extremely high standard, and are trustworthy/reliable if your safety vents are good.

I would very much like to see a restoration video!  I have several of these "cruddy" old canners and honestly it never even occurred to me to try and polish them up, or that it would be particularly possible.  That battleship gray color that old aluminum has (the oxide that protects them without damage for a century!) is not at all attractive to me.  I admire your son's nondestructive instincts when it comes to old treasures but in this case, I don't agree with him.  If an item, however old, is going to be a utilitarian treasure that gets used and stored in our living spaces, then having it also be attractive is important, I think.