Announcing a New Book, The Herbs and Weeds of Fr. Johannes Künzle 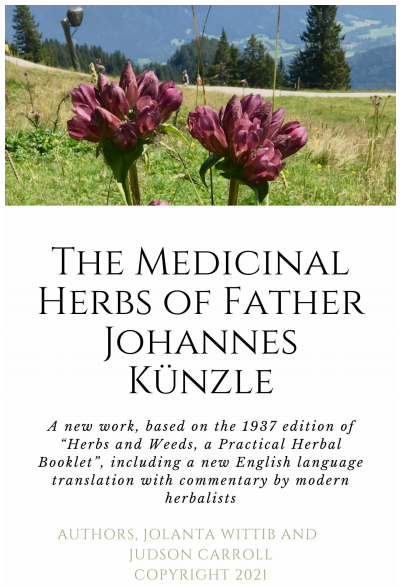 In the 1911, Fr. Johannes Künzle published what would become one of the most important books written on Herbal Medicine in the 20th Century.  This bold and outspoken Swiss priest wrote what was little more than a pamphlet on herbs and their use.  His brief booklet, of fewer than 40 pages, sought to educate the common people of central Europe about the flowers, weeds and trees that grew in abundance, and how they may be used to treat common illnesses.  Like his predecessor, Fr. Kneipp, his vision was of kitchen medicine, folk medicine, and a firm faith that God had provided all an individual of family could need for general health in the “Herbs and Weeds”.  His little book became a best seller.  This led to fame that he generally did not desire, and to clashes with the medical establishment.  He challenged that establishment and won court battles, proving that his herbs were sometimes even more effective than their medicine.  This made Fr. Künzle an international figure.

Fr. Künzle revitalized the tradition of “German Folk Medicine”, and his booklet was likely to be found in any German speaking home.  Unfortunately, then came the World Wars.  Much of the world was at war with Germany and its allies.  Books written in the German language were not to be seen in homes in America, England or France (etc.).  Fr. Künzle’s little booklet was never translated into English during his lifetime; only one such effort was made decades later, and that disappeared quickly.  By the 2,000s, only scarce reference was found of Fr. Künzle, even online.  I only became aware of his work through Maria Treben, the great Austrian herbalist who once more brought German Folk Medicine to the collective consciousness of the modern world.  Made curious by brief mentions of Fr. Künzle in her books, I began a fruitless search for an English translation of his book either to purchase or in libraries.  Fortunately, I had an Austrian friend.

Jolanta Wittib and I met on The Grow Network Forums.  I quickly recognized her as a skilled and experienced herbalist, in the tradition to which I was being drawn.  So, I asked her if she would be interesting in collaborating on this book.  To my surprise, she did… and, we have spent days and months enjoying and discussing this great work.  All credit for the translation and the photos goes to Jolanta.

What became evident to us early on was that the simple translation of the work was not sufficient.  The brief booklet assumed a regional knowledge of plants.  Some plants and many terms would be unfamiliar to English readers.  Moreover, much has been learned about herbs and illnesses since Fr. Künzle’s time.  We decided to write our own commentary on his work, and expand on many points, as professional herbalists.  The result was an entirely new work of more than 150 pages!  Do not fear though, Fr. Künzle’s words are still there, intact.  His wisdom and delightful character shine through.

We hope you will enjoy our book, and that it will find a valued place in your library.  For now, it is an eBook only, in .pdf format.  Should we be able to offer it in print one day, those who purchase the eBook will receive an email offering a substantial discount on the printed version.  Until then, you may wish to print out a paper copy on your home printer – we’ve made every attempt to format the book so that it will print well on a home printer, and can be spiral or clip bound on the left side.

Please click the button/link below to purchase our eBook.  You will receive an email with the file attached once payment has processed.  Any updates to the book will be available at no additional cost.