My other thoughts are aquafaba or maybe whipped gelatin?

What would you do? I'm leaning towards whipped gelatin for shelf stability since I have to drive it a few hours and make it a day ahead, but wonder if aquafaba might taste less weird.

I suppose I could make some sort of eggy custard with almond milk for a similar creamy feeling to whipped cream.
C Mouse
Posts: 98
Location: Ohio
22
I like...

posted 1 week ago
I was going to suggest coconut, but nixing that, maybe a meringue?

Hello, please call me Mouse. Talk to me about rabbits, chickens, and gardens. Starting an intentional community in Ohio.
http://quarteracrehome.wordpress.com
https://www.etsy.com/shop/HomeAndHedgewitch
https://www.instagram.com/wren_ohio/

Posts: 1902
Location: Cascades of Oregon
196
posted 1 week ago
My daughter can't eat dairy anymore coconut milk but it has to be very cold. I use an immersion blender 1tsp sweetener and i tsp vanilla or orange extract

The "Silk" brand of non-dairy alternatives has a whipping cream that apparently does whip under the right circumstances (keep milk and utensils *cold*).  It does have coconut oil in it, but it is not coconut milk per se.  I've been hoping to try it, but most of the local grocers only ventured recently into the more diverse vegan and non-dairy offerings....so will try it myself when the opportunity arises.  Maybe worth a try?.... Good luck!

posted 1 week ago
Vegan jello (carrageenan based) with Silk soy milk can be whipped into a foam. It’s more like soft meringue than whipped cream, though.

The "Silk" brand of non-dairy alternatives has a whipping cream that apparently does whip under the right circumstances (keep milk and utensils *cold*).  It does have coconut oil in it, but it is not coconut milk per se.  I've been hoping to try it, but most of the local grocers only ventured recently into the more diverse vegan and non-dairy offerings....so will try it myself when the opportunity arises.  Maybe worth a try?.... Good luck!

Ooh! That looks very interesting. Checked the silk Canada website and doesn't look like it's made it north yet.

Probably a city thing even when it gets here - the local grocery store doesn't even have the dairy free coffee creamer 50% of the time, and only had one type of dairy free milk. My mother is also dairy free, so it's a challenge and we stock up whenever we go to a bigger town.

Tried aquafaba tonight with a cupcake I made with excess batter. Meh. Flavour less and sweet, mostly just tasted like sugar. Was impressed with how well it whipped and would take it over cool whip any day though.  I saw some references to freezing it which might be neat for summer.

I think I will try making an almond milk custard tomorrow and see how it goes.
Catie George
gardener

Mk Neal wrote:Vegan jello (carrageenan based) with Silk soy milk can be whipped into a foam. It’s more like soft meringue than whipped cream, though.

Do you think gelatin would work? My friend is dairy free, not vegan and I have some unflavored gelatin in the cupboard but not a clue where I would get carrageenan locally. Sometimes I miss living in the city with easy food options.


It's the 'lightening' the flavour that I am looking for more than an identical texture I think. Just needs to roughly form a 0.5 cm thick or so layer of creamy vanilla stuff.
Dan Boone
gardener

posted 1 week ago
In the USA they sell non-dairy whipped topping in the freezer case right next to the ice cream, just thaw the tub in the fridge and spoon it on like whipped cream.  Cool-Whip is the leading brand.  They also have it in a spray can in the dairy case.  It's basically made of hydrogenated oils and corn syrup and air so I wouldn't call it healthy, but if "no dairy" is the only target, this hits that spot.  I imagine the brand is different in Canada but unless some food law forbids, I would expect it to be available.

posted 1 week ago
Here's a brief glimpse into how Catie's mind works when looking for recipe substitutions. I've been celiac for almost 20 years and off and on dairy all my life sinuses to weird substitutions.

They do indeed sell cool whip here. Nutriwhip used to also be around but it's been discontinued for a while now.

I have some pretty strong hang ups about cool whip. Several very kind parents of friends when I was a child, feeling sorry for me for not being able to eat ice cream or, later, cake, (celiac) at birthday parties, would give me cool whip in a dish. And then I'd feel obligated to choke it down. And then my mother went through a "The Magic of Jello" cookbook stage where every dessert was made with some combo of jello, pudding, and cool whip.

It is theoretically an option though. Maybe it's better than I remember it being - they could have improved the recipe in the last 15 years. Cool whip mixed with jello or pudding wasnt terrible. Maybe if I mixed it with vanilla pudding....  At that point might as well just make pudding...

Actually, vanilla pudding mix works pretty well with almond milk. There's another option for a creamy vanilla ish filling that doesn't require me remembering how to make an egg custard.

Cool whip sent me down the rabbit hole of 'can you make cool whip at home?"


I found this, which may be a less coconuty, more stable version of coconut whipped cream that doesn't require separating out the cream.

I don't keep protein powder on hand and i think it's $35 for a bottle in the local store but definitely worth a try in the future. ..

And here's another recipe for a soy milk and coconut and almond oil based version:

Don't keep almond oil on hand or soy milk, and neither are available at the sad sad local grocery store. But another recipe to try.

And ... Here's an excellent technical reference on how to make a mousse, which is technically wharthat cool whip and pudding concoction of my youth was - a vanilla and egg white mousse is an alternative solution (if I can make a custard). Or even a chocolate mousse, if I am not sticking too closely to traditional.


And here are a million and one people talking about traditional gelatine mousses, including wartime ones that did not use cream.
https://www.chowhound.com/post/instructions-whipped-jello-cool-whip-recipes-696825/

I think I am even less decisive now. Leaning towards a mousse though.
Mk Neal
pollinator
Posts: 535
Location: Chicago
156
I like...

posted 1 week ago
Gelatin whipped with sugar syrup is marshmallow, you could probably search recipes for "marshmallow fluff" or buy a jar premade.

If you're ok with egg, then 7-minute frosting might fit the bill.  Egg white and sugar prepared to be more softer and creamier than meringue.

posted 1 week ago
We just bought and tried a can of Reddi wip  non dairy whipped cream made with Almond milk.
Liz is A-2 only dairy,  so whipped cream was out and cool whip was the only poor choice.
She bought the reddi wip Almond on her friends recommendation.
I had my doubts about it, but low and behold it was really -very good. 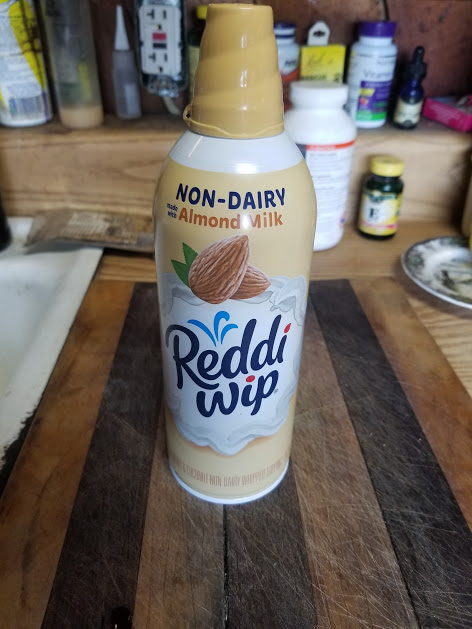 Posts: 1902
Location: Cascades of Oregon
196
posted 1 week ago
The whipped coconut milk can be very heavy, that's why I use an immersion blender to introduce a lot of air to the mix.

posted 1 week ago
Ok - so final solution. I decided to be less of a perfectionist - and more realistic about the likelihood of fluffy toppings of any type surviving travel.

First - aquafaba (chickpea water beaten to be foamy) is by far the best 'whipped topping for on top of drinks" substitute I have ever found. I've been having it on top of my coffee  today and it's now in my list of decent substitutes in the future. Not right for this dessert, but would be great on fresh berries too. Very light, far lower cal than whipped cream. Just a fun texture with no real taste other than icing sugar.

I went to the store one town over with a slightly better selection and bought two cans of whippy stuff. One can of whipped cream, one of the coconut whip. Everyone  (two dairy free/lactose free people, two not) can doctor their own and choose how much whippy stuff they want. This makes it portable and easy and I don't have to worry about the cake smushing in travel. The people who are still dairy free probably won't complain about the coconut flavour, while the other person and me who aren't dairy free probably would and now won't. Neither is as good as homemade, but less effort. But

I am 100% going to try the olive oil and egg dairy free chocolate mousse recipe I linked to above later this summer. Half my extended family is dairy free, so that could be a really good dessert.

Thank you everyone - I love how large of a knowledge base this community has about weird and wacky substitutions.

Here's a recipe for 7 min frosting MK Neal mentioned above. It looks fantastic. Not right for a cake I want to make ahead and transport by car and then by boat... But another thing for me for try another day when the cake isn't being so abused.


And here's marshmallow fluff with gelatin. Also looks really tasty as an option.

Janet Ortega
Posts: 1
posted 4 days ago
This is great. I’ve never seen this before. It doesn’t have hydrogenated oils in it?
Denise Kersting
pollinator
Posts: 218
Location: South Central PA
55
I like...

posted 4 days ago
I haven't tried this recipe yet, but I have it earmarked: https://thehiddenveggies.com/aquafaba-whipped-cream-vegan-cool-whip/
Catie George
gardener

Janet Ortega wrote:This is great. I’ve never seen this before. It doesn’t have hydrogenated oils in it?

I am not sure which of the recipes you are referring to. You can respond to one by hitting the 'quote' button, unfortunately the 'reply to this post' button just puts a new post at the bottom of the place, rather than quoting the post you were looking at.

Denise - I highly recommend trying aquafaba! Really easy, really tasty and I will make it again. I am curious to try the recipe you shared too, with oil to give it a bit more mouthfeel.

John Weiland
pollinator
Posts: 1733
Location: RRV of da Nort
332
posted 4 days ago
Recently made a quick chocolate 'ice cream' with a combination of cashew milk, pea protein, sugar, and cocoa.  It had its pluses and minuses (more pluses than minuses, surprisingly), but this thread got me thinking.....is aquafaba the only extract out there that "whips" like dairy cream?  With the exception of the commercial product of Silk heavy whipping cream, are there other plant-based liquids or suspensions out there that perhaps others out there either 'accidentally' or deliberately ended up whipping into a fluff in a canister or immersion blender?  Might be another point from which to launch additional experimentation.