What to do with moist ground/willow grove

Posts: 33
posted 13 years ago
I'm not sure if this belongs under the "permaculture" forum or not (I'm so new to the concept that I don't even know where to ask my questions or which questions to ask) but my wife and I are trying to buy some property that is bordered on one side by a creek.  In a little area by the creek there is a willow grove, which indicates really moist soil.  This area is most likely the location of a spring (in spite of record amounts of rain recently, this area has not flooded or been under water).  In the mind of a permaculturist, what would be a wise use of such an area?  What are some possible ways that could fit into a homestead design?

We are in West Tennessee in zone 7.

-Put in a spring box and use the water for drinking (if it's sweet) or irrigation
-Plant moisture loving species there.
-Create a wildlife area
-Install a pond for aquaculture &/or swimming
-Grow basketry willows
-Do nothing
-Etc.

What you actually do will become clearer once you better identify your needs on the site.

From a real estate perspective, I will say that having a spring on your land is likely to be a good thing.

Posts: 262
Location: Coast Range, Oregon--the New Magic Land
2
posted 13 years ago
What about that curly willow? THere's a guy who sold bundles of cut curly willow sticks(about 5 feet long, about 7-8 sticks) for 10$ at the local holiday gift fairs, I had a booth in a few of them and I noticed he sold EVERYTHING he brought.

Otherwise why not encourage native species? Having a healthy swampy area gets you a lot of beneficial wildlife and bugs.

My Blog, Natural History and Forest Gardening
www.dzonoquaswhistle.blogspot.com
"Listen everybody, to what I gotta say, there's hope for tomorrow, if we wake up today!" Ted Nugent
"Suck Marrow" Henry D Thoreau

Brenda Groth
pollinator
Posts: 4437
Location: North Central Michigan
32
posted 13 years ago
you will have to check YOUR zones and stuff..but there are a lot of things that can grow in a creek/willow area..you can put some cress along the creek bed if you like cress for eating..even plant other water lovers such as cowslip, and winterberry, elderberry, there are lots of perennial flowers that LOVE being near water..primroses, flags, and then the edible daylily will grow in moist soil.
if you want to dig a small area of a pond you could have slow water..which will grow things fast water might not..and you could make an area that fish could be kept..are your willows the regular wllows or weeping willows..regular willows are great for baskets or willow furniture..which could be an income source for you..they will grow back..you can cut it and weave wattle fences for animals to keep them in..if you stick it in the ground it will grow ..so you can grow your own fences..right in place..or screens..

by the way..you are doing it right..just throw out the quesitons and you'll get some comments and ideas..and then you pick and choose the things you like and toss the rest !

Anonymous
Posts: 0
4
posted 12 years ago
Willow makes a decent fodder for grazing animals.
Posts: 92
posted 12 years ago
It depends greatly on your ong term goals for the area. Willows certainly do mean there is a good bit of moisture, but something to think about is erosion and the fact that those willows do stabilize the soil where they are at. We've got a small creek bed that gets clogged up from the willows, and restricts flow to the point of overflow if not cleaned out regularly. I hesitate to eradicate them completely due to their erosion control and habitat for small critters.

Laughter is the best medicine.
http://www.lawntimes.com

rose macaskie
Posts: 2134
13
posted 12 years ago
I am glad to here from dvmcmrhp that willows block streams and create over flow. I have what they call here a torrent running through the garden, that is a stream that dries up in summer, it is the reason my garden is a steep slope down on one side and an assault course up on the other, I go up hanging on to a rope doing a bit of the sort of walking up walls leaning back on a rope sort of assault course thing which is more fun than hard, the precipice is not a wall it is just very steep. It is much more fun than funny to do, though it might be funny to think about.
If that slither of water did not rush so fast but turned into a wider band it would not cut such a ravine in the slope .
In fact the river running through your land is not yours here neither are the meter or two or three to either side of it though it seems you can cut down trees in the river if you want. I let the willows grow that had been chopped down when i brought the garden so they have grown quite well as they already had roots and i clean up so the town hall wont take cleaning up into their own hands and I throw stones into the river to turn the stream into a slow wide flow instead of a thin fast one, and just cross my fingures and hope they don't come and chop down all the trees. There are three walnuts two very young, put in by the former owner and some poplars in a bunch, a buckthorn and a wild privet which is like small tree and lot of honeysuckle, two types of it, and several oaks that have self seeded and a few very young may trees, sloes and wild jasmine. It does not look much when you are down there but it sound a lot written down and all of that is wild, i have not planted them and i dont think anyone else has except the walnuts, Maybe the the walnuts just float down stream and grow but i should think they were planted to entice someone to buy the land.
The downward course of the river is to steep for much overflowing i would like to dam it and have a pond. If i have the time or were with all i will do it ,always knowing that the authorities will come and undo it if they don't like it, maybe there is some way of getting permision to do things like build bridges and such.
Here they are always clearing the river banks of trees for fear of fires. THis is so bad for the streams, turning them into a fast flowing quickly disappearing watercourses.
I was looking for a source  to back up my saying that treas slow down rivers same quantity of water going down slower and dvmcmrhp has given it.
I have a foto of willow roots I took when a bit of bank fell away so you can see how all pervasive they are.  agri rose macaskie. 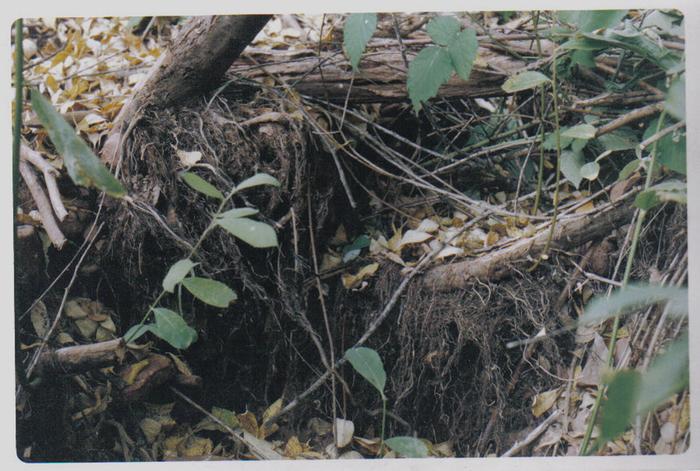 rose macaskie
Posts: 2134
13
posted 12 years ago
wylde thang suggests growing curly willow by the stream because  the curly wands sell easily well that is a good idea though it must take a while to have lots of them. The only autoctonous trees here people would be upset. Though i do grow none autoctonouse trees.
i have a curly hazel up near the back door of the house in my flower bed , it is not very pretty in summer hazel leaves are not so beautifull but it is really worth having in winter the catkins start groing in autumn are yellow and last all winter hanging on the curly twigs and are really pretty.
This curly hazel has grown really slowly, if i brought some and tried to cultivate them, it woudl take a really long time to get a crop though i dare say i would be glad enough of them when the day arrived to harvest them but maybe as the soil recovers more and more things will grow quicker and maybe curly willow is quicker growing than hazel and if i planted them near the river i could get some big crops of curly willow wands. May be if you are tryinhg to grow them as a crop you fertilize them or compost them and they grow quicker. agri rose macaskie.
Anonymous
Posts: 0
4
posted 12 years ago
Ive got curly willow, it takes 5-7 years for decent lead to be big enough to cut a cane from. smaller branches are used ornamentally in basketry as they ad some flair.


my dad carves canes carved from curly willow and has been offered up to $1k each for them, but he wont sell, they are gifts he makes for his friends.
rose macaskie
Posts: 2134
13
posted 12 years ago
deeston lee, how good is your dads land. Does getting a quick crop depend on having really good soil or on buying really good trees or on knowing enuogh about soil to manure it right and water it right, watering it right could  make it un organic if you lived in a dry place were i think you should try to do what you can with as little water as possible. agri rose macaskie.
paul wheaton
steward

Posts: 33
posted 12 years ago
Please excuse my ignorance, but what, pray tell, is a tree bog?
paul wheaton
steward

knuckledragger wrote:
Please excuse my ignorance, but what, pray tell, is a tree bog?

If in the floodplain, the wet spot is likely connected to the greater creek flow through sub-surface flow.  I would not recommend concentrating human feces next to a creek.

Posts: 965
Location: ZONE 5a Lindsay Ontario Canada
11
posted 12 years ago
elderberry and alder as medium to small tree layer, currants gooseberries and blueberries (if you can make their spots acidic enough.

Shrub Layer- currants, gooseberries and blueberries (if you can make their spots acidic enough)

Herb Layer- asparagus, mint, possibly peas, potatoes(if grown on top of and below thick layer of straw if there's a need to soak up excess moisture) maybe cattail for their delicious hearts?

Scott Reil
Posts: 179
Location: Colchester, CT
1
posted 12 years ago
I like all Travis' suggestions; some with wildlife more in mind than peeps...

And for good eats for everyone!
Cranberry
Ostrich fern (fiddleheads!)
Marsh Marigold (must boil leaves to release toxins, but good after that)
Serviceberry (a must; go long here)
Pickerel weed (another potherb, but needs marginal water rather than just soil)

Medicinals could include swamp rose, boneset and Joe Pye weed  (Eupatorium spp.) along with the aforementioned willows; if you have added all the above you have not just a useful space feeding you and other species, but a dense and complete ecosystem from top to bottom. And that's very cool