J Nuss
Posts: 50
8
posted 2 weeks ago
What do you guys think this honeybee is doing on my pee-soaked biochar?  He was obviously doing something, he’d fly from bucket to bucket and walk around on it a little doing something with his mouth …
6A3A31BF-FCA4-4E89-81BD-FE98AAD42698.jpeg 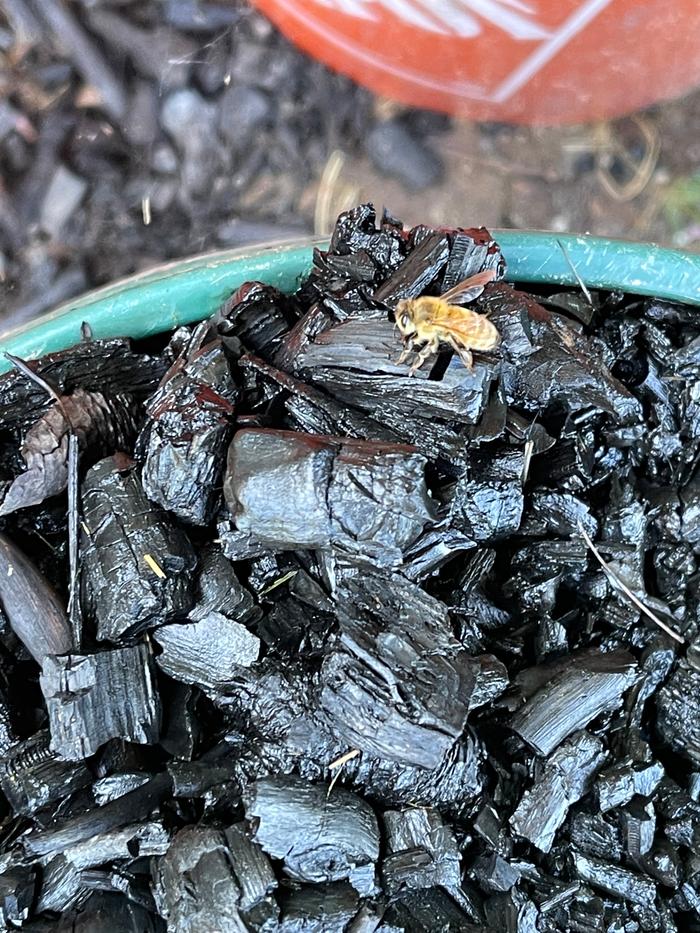 posted 2 weeks ago
When bees go after my pee it's time to check my blood sugars!

J Nuss
Posts: 50
8
posted 2 weeks ago
Hehe, there can’t be any sugar left in that stuff, it’s been sitting there for months and diluted by rain water the whole time too. Don’t think my urine has any sugar in it anyhow, I have had recent urinalysis done because they wanted to check for infection… no infection and no one mentioned sugar in my pee
J Nuss
Posts: 50
8
posted 2 weeks ago
Another one (or the same one) just came back.  I wonder what they are after?  Fungus maybe ?
13A56ADF-8739-47A9-9824-997B47CE6041.jpeg 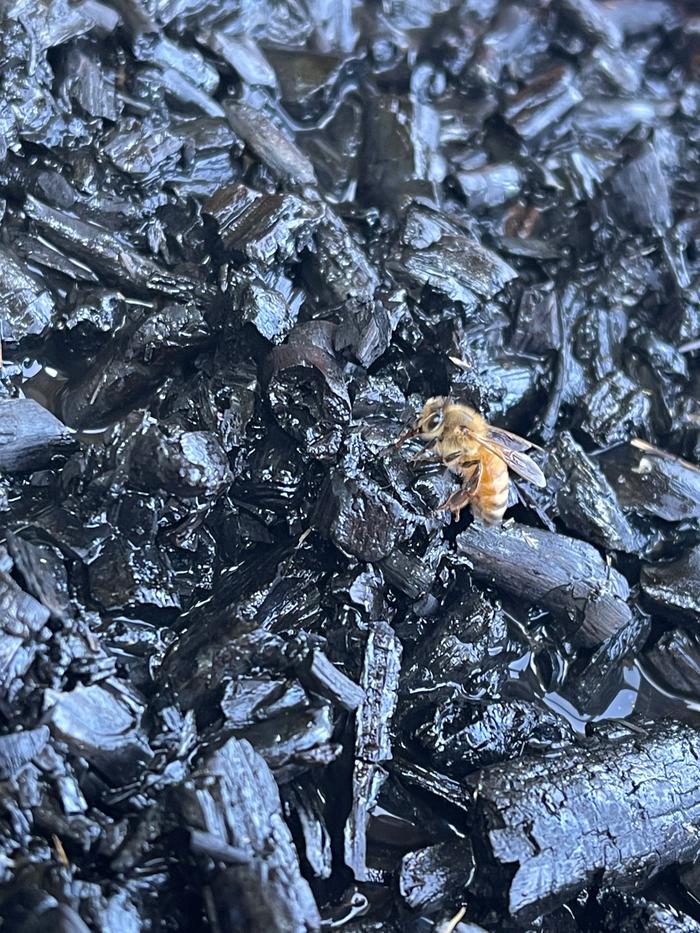 posted 2 weeks ago
If it's wet then probably just after water.

J Nuss
Posts: 50
8
posted 2 weeks ago
Maybe, but it didn’t seems to be going after the water specifically, and was dabbing around with its mouth on the more dry top stuff. Peculiar anyway!  There was probably plenty of water around I had just ran the irrigation last night
J Youngman
pioneer
Posts: 90
Location: North Texas, Zone 8a, Black Clay
3
posted 2 weeks ago
Maybe they are going after the salts from the pee? Ants do.

Posts: 3655
Location: woodland, washington
159
posted 2 weeks ago
I've noticed that honeybees seem to prefer any source of moisture that isn't open water. a friend noticed some sipping from a recently watered tray of seedlings. I've often seen them on wood chips that I pee on. or wet moss. or mats of algae on a pond. or any number of other damp places. I don't know why this is. could be minerals. could be fungus or bacteria or some other organism. could be just avoiding the danger of getting stuck and drowning in open water. could be something else entirely that hasn't occurred to me. that last one seems the most likely.

Posts: 3655
Location: woodland, washington
159
posted 2 weeks ago
this just came to my attention:
Ratios rather than concentrations of nutritionally important elements may shape honey bee preferences for ‘dirty water’
https://onlinelibrary.wiley.com/doi/pdf/10.1111/een.13067

J Nuss
Posts: 50
8
posted 1 week ago
That’s interesting.  I have noticed more and more honeybees on these buckets of biochar.  I took a video of one…. I tried to upload it here but movies aren’t allowed so I slapped it on my YouTube channel.  What do you guys think?  They don’t seem to be sipping at the liquid, and hang around for quite a while flitting here and there seemingly foraging for “something”.  This one seems to be spreading something on its body ?  https://youtube.com/shorts/bIgJKT8P9pw
tel jetson
steward

Posts: 3655
Location: woodland, washington
159
posted 1 week ago
she sure doesn't look like she's after water. if it's the minerals she's after, I would expect their concentration to be higher toward the top of the bits that are proud of the water where. could also just be exploring a little, seeing what's available. there's some colony learning about what resources exist and where they exist that's required for them to take advantage of those resources. maybe just an informational excursion for her to report on back home.

J Nuss
Posts: 50
8
posted 1 week ago
Today I’ve seen up to three at a time on the bucket… word seems to be spreading that there’s “something” desirable here…
J Nuss
Posts: 50
8
posted 1 week ago
Well it’s official…. Honeybees just basically come to these buckets all day every day.  An individual hangs around for multiple minutes with preference for the dryers top stuff. maybe I should stir them (I don’t).  They land in a place, dab around, fly some and land somewhere else.  They shack out the other buckets that aren’t overflowing  (picture related, they inspect but ignore the left bucket and prefer the drier right bucket over the middle wetter bucket).  These buckets were made amateurly by burning piles of brush that needed to go and quenching when it got low.  Pee and probably worm tea were mixed in and I probably did some mixing and stirring a few months ago but they’ve just sat untouched since.  They are under my deck in the shade.

So I guess, even though I still don’t know what they are after, minerals seems to be the most probable answer, but who knows…. ? I guess the take-away is that beekeepers would probably benefit in unknown ways by keeping such a thing around!  I know earlier in the season there was another species of bee (or fly?) I noticed was loving it too, by the way.  I haven’t observed bumbles or other bees landing on it, and a bumble even just came and checked out the honeybee that was currently on it before continuing on. 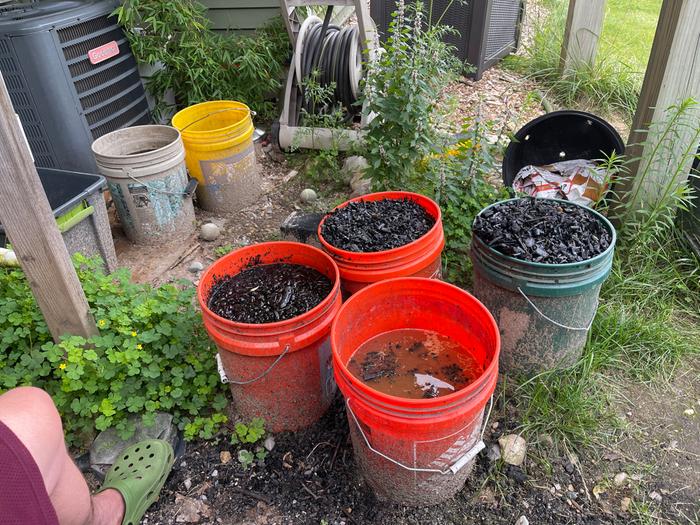