Steve Mendez
Posts: 111
27
posted 1 week ago
My wife and I raise American Bullfrogs (Rana catesbeiana). We began to develop Bullfrogs as an aquaculture species in 1989 after graduating from the Technical Aquaculture Program at the College of Southern Idaho. We provide thirty six customers with live purpose-bred farm-raised Bullfrogs for scientific, medical, and educational purposes.

Our farm is on a 45' by 100' (14 m x 30 m) section of rented ground. We consider our farm to be sustainable. All of our Bullfrogs are produced on site year-round. No herbicides, pesticides, non-organic fertilizer, antibiotics, or electricity are used at our farm. A local mill supplies all of our feed. The collected manure from our animals is composted and the effluent water is used for irrigation. We are in business to make money, we do contribute 10% of gross sales to non-profit organizations, we have no debt, and have never accepted any public funding or government assistance.

I'll continue if there is any interest. 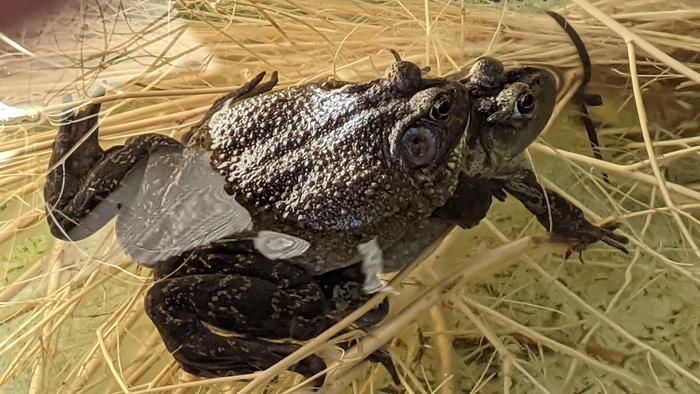 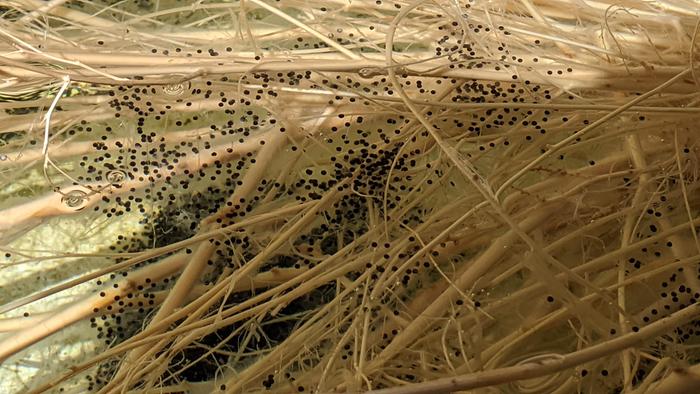 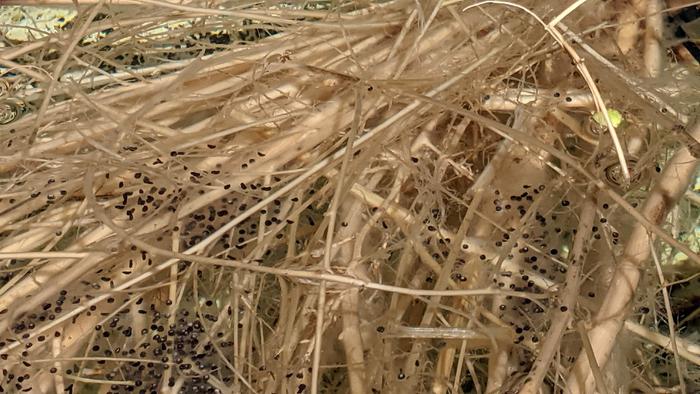 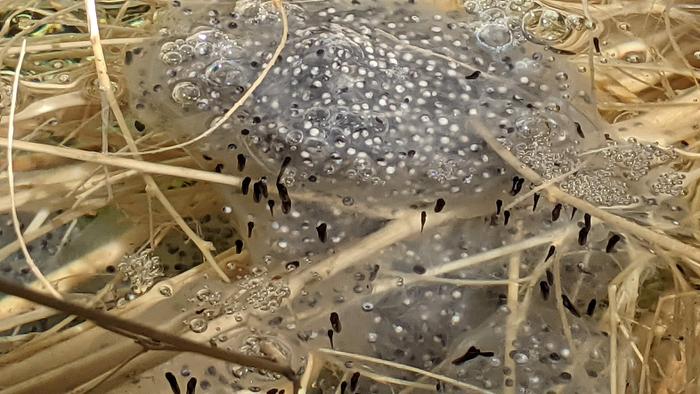 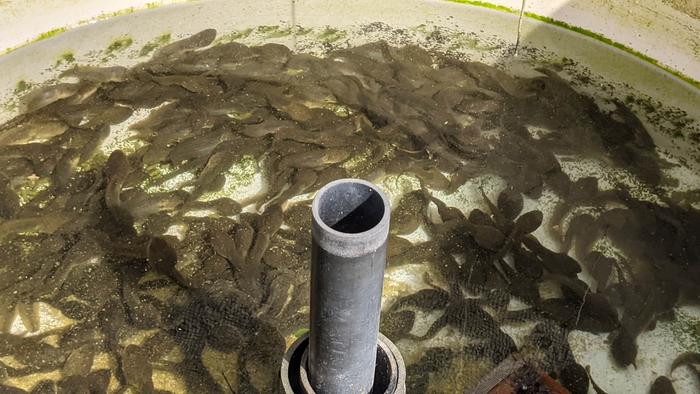 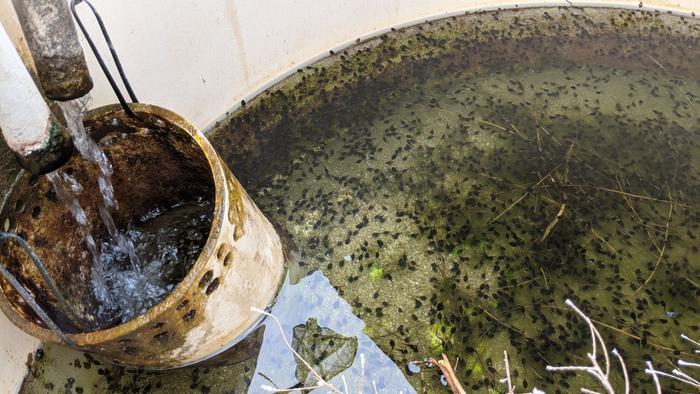 posted 1 week ago
I wouldn't mind knowing more about how you found your customers, what you charge vs your overhead, and how you got licensed (if any is required).

In the fall of 1994 the laboratory director at a major medical school saw a small ad that we had placed in the classified section of Reptile and Amphibian Magazine. She called and asked if we could supply her with 20 Bullfrogs to be used  for training doctors in microsurgery techniques on blood vessels. We sent them to her; up to that point we had only sold a few pairs to enthusiasts.

A couple weeks later she called us back very excited. Most of the Bullfrogs had survived the surgery and had healed up. Something that had never happened before. She had a colleague who wanted some of our Bullfrogs for heart muscle studies. A light bulb came on in our minds. We had some flyers with some basic info on our farm-raised Bullfrogs printed up they featured a photo of my wife in her lab coat holding large Bullfrogs on her open upturned hands. We mailed them out to some medical schools and got a small response. In the meantime the first two researchers contacted more of their colleagues about our Bullfrogs and we got more orders.

It turned out that laboratory frog suppliers (our competition) were providing wild-caught frogs that were skinny and hyper-active, with worn off snouts, sores, broken bones and digits, and generally stressed out. Our fat, happy, and docile farm-raised Bullfrogs were the exact opposite and they were less expensive. Word spread in the research community, the rest is history.

Our Bullfrogs average about $61.00/lb., overhead is pretty low now that most of our infrastructure is in place. We have a business License, a Commercial Rearing License, an Invasive Species Possession Permit, and a Live Fish Transport Permit. 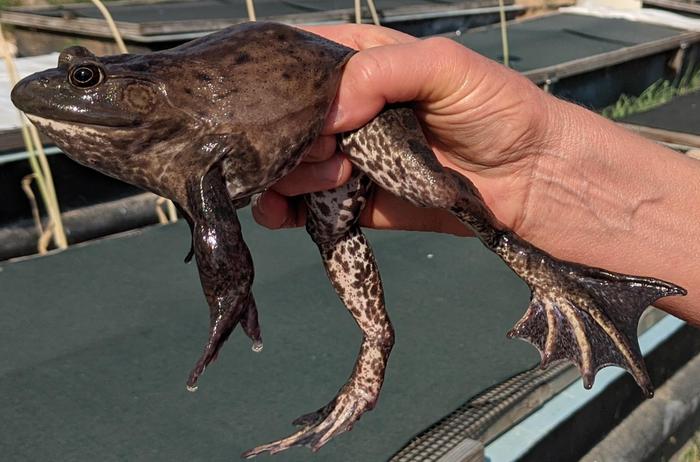 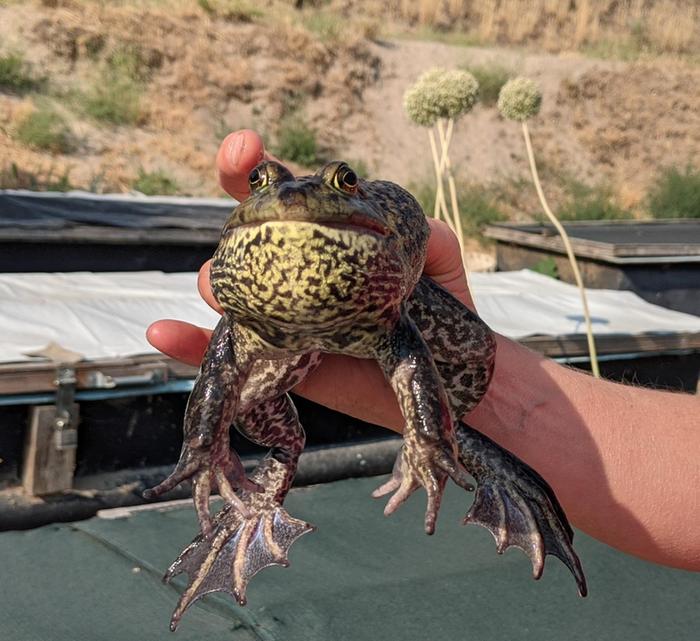 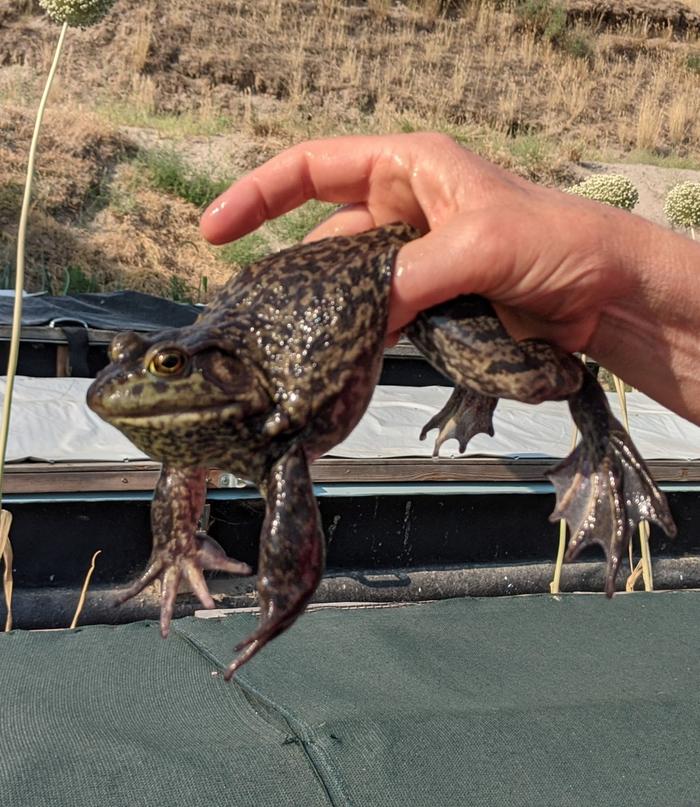 Anyone else suddenly considering raising frogs? Something I never thought I would say.  Great job being sustainable and responsible!

Planting and nurturing my Oak of Mamre

Bullfrog larvae/tadpoles are fully aquatic. They are herbivorous/detritivores that will also opportunistically feed on dead animals. Their mouths are designed to scrape off bits and pieces of larger food items, they can also filter feed in "green water". Their diet has to be quite varied in order for them to maintain their health.  They are also fairly active in their constant search for food. These factors presented major problems early on in our attempts to turn Bullfrogs into farm animals.

Once the tadpoles have morphed into the adult form, everything changes. They become semi-aquatic, carnivorous, mostly sedentary, ambush feeders. With their oversized mouth they will lunge at and engulf anything that moves. When the "prey" continues to move in their mouth they will use their hands and their eyes in an attempt to stuff it down their gullet and swallow it. If the "prey" doesn't move in their mouth, the Bullfrog will spit it out and wipe it's tongue off with it's hands and refuse to eat that thing again. In addition to engulfing large prey, Bullfrogs also have a long sticky tongue that is attached at the lower front of the mouth. They can flick this tongue out at smaller things that move and whip them back into their mouth. If the small "prey" continues to move, it is swallowed using the eyes to push it down their throat. If there is no movement in the mouth the item is spit out and not eaten again. These behaviors also presented major problems in our attempts to turn Bullfrogs into farm animals.

Along with Bullfrogs being carnivores with very large mouths, they are also cannibalistic. A Bullfrog will attempt to engulf and swallow another Bullfrog that is up to 75%  of it's own weight. This can result in the eater being choked to death by the eaten. Very close attention must be paid to keeping the Bullfrogs sorted and segregated by size. "Shooters" can develop overnight. This means that a population of 50 gram average Bullfrogs can have some 70 gram Bullfrogs the next day. Care must be taken to remove them immediately. Tadpoles will also swarm and eat the skin off a morph that is unable to get away from them.
Morphs-with-skin-eaten-off-by-the-unmorphed.jpg 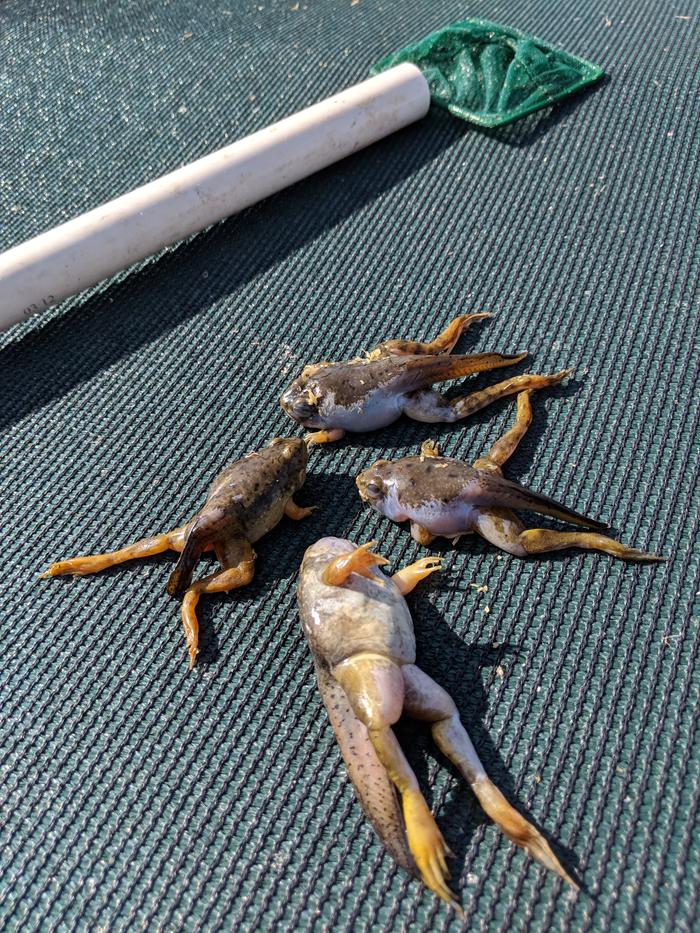 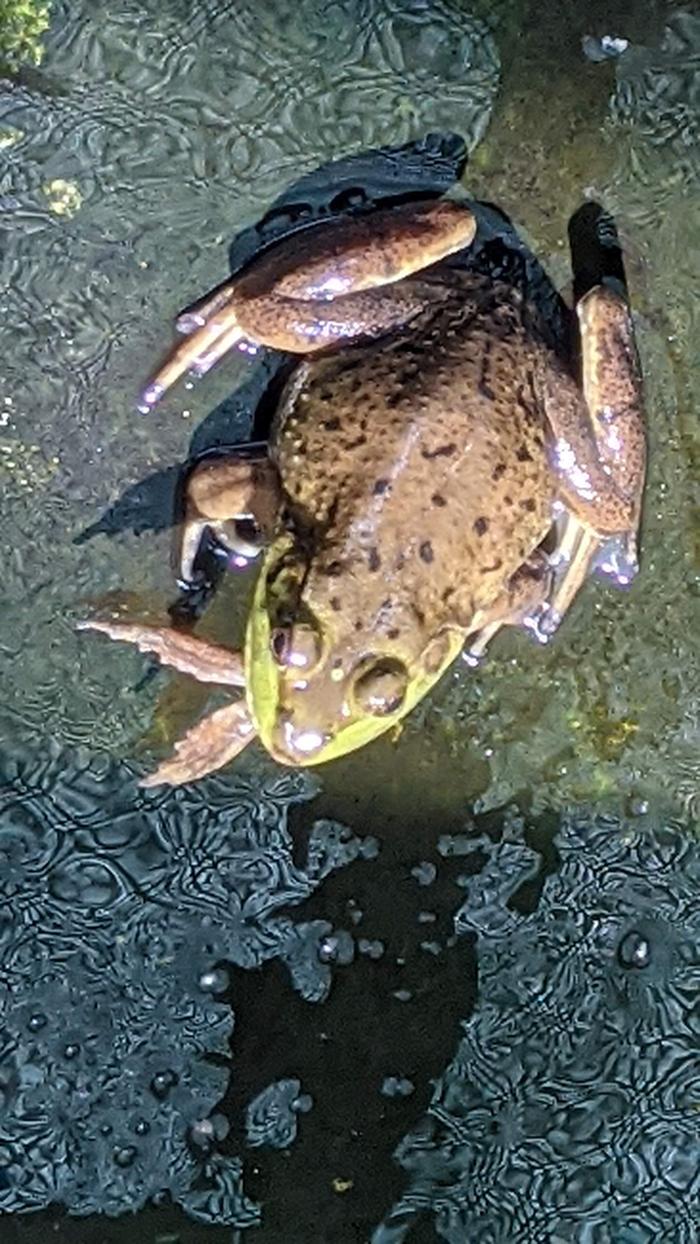 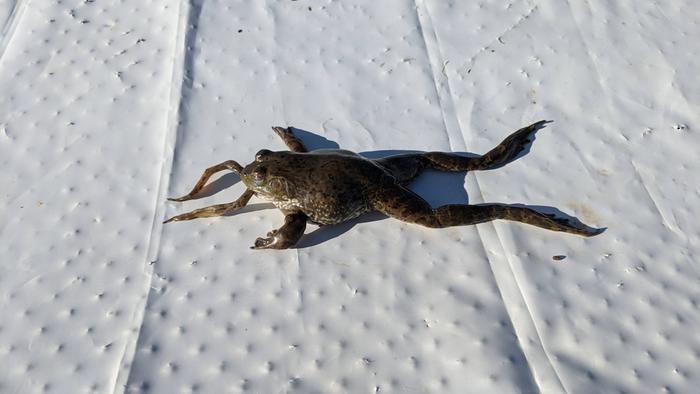 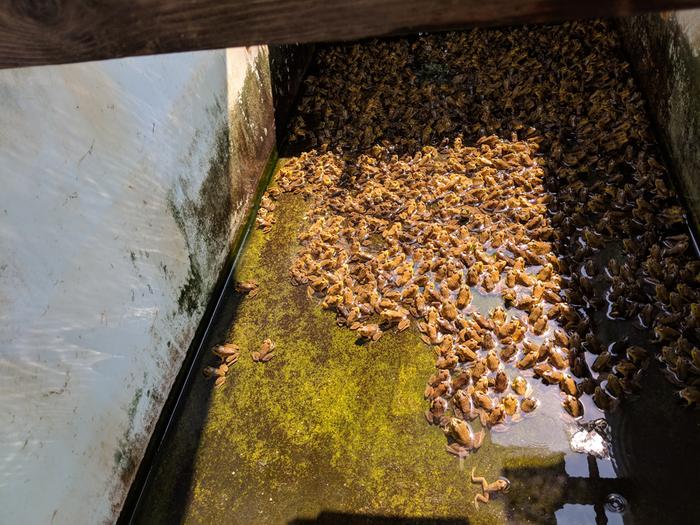