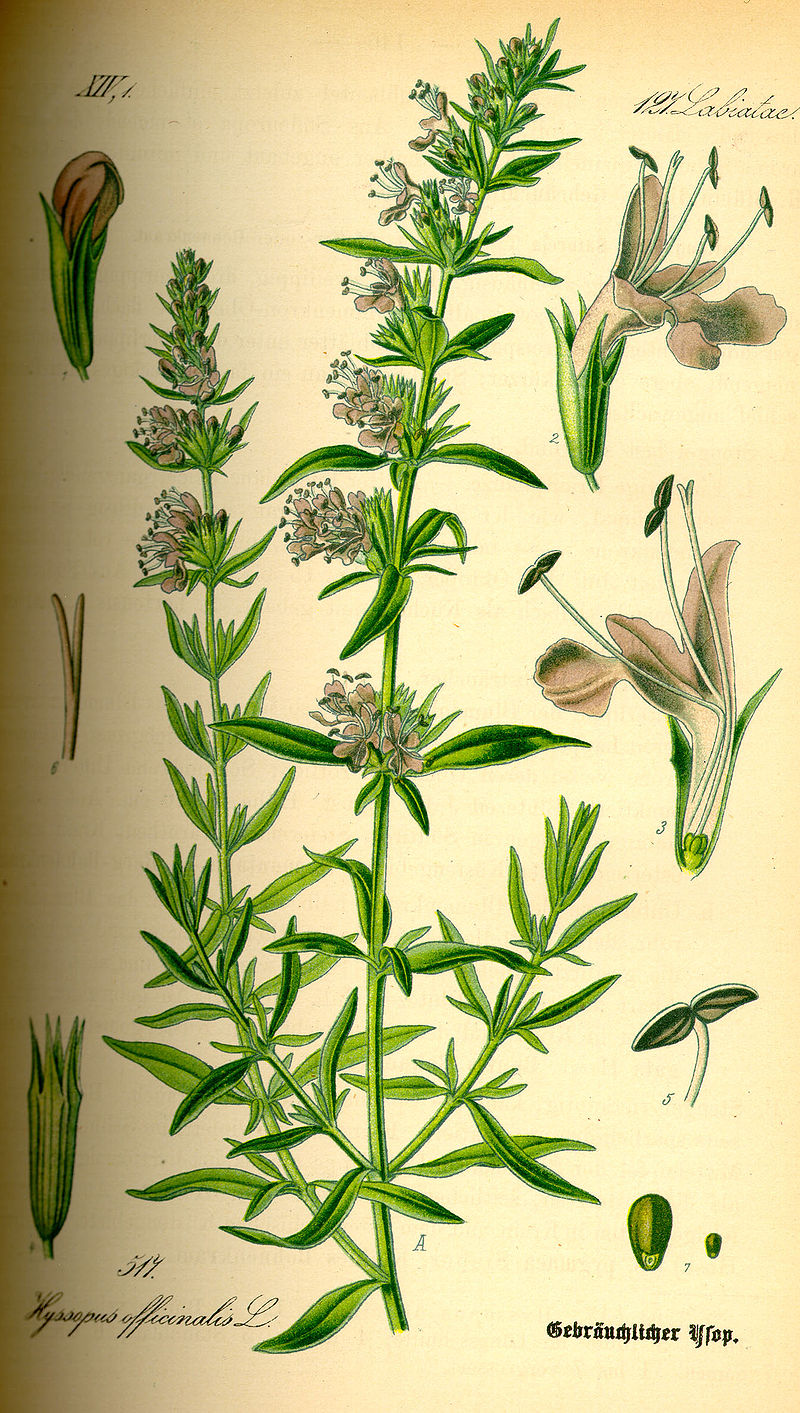 Few herbs are as frequently mentioned or held in such high esteem by the ancient writers as Hyssop (Hyssopus officinalis).  Hyssop was mentioned as being part of the purification rights of the ancient Egyptians and Hebrews (although, there is speculation that some of these references were to a wild Oregano).  Hyssop has tremendous religious significance in the Bible, being the herb used with the blood of the Passover lamb to identify a Hebrew home when the Angel of Death passed through Egypt, killing the first born, an herb used in sacrifices and the herb used to offer vinegar to quell the thirst of the Christ as he died upon the cross.  In the ancient world, Hyssop was not only of great religious significance but was one of the primary herbs used medicinally.

Hyssopus (a well-known herb) is of two sorts — one mountainous, the other grown in gardens. The best grows in Cilicia. It is able to reduce the intensity of symptoms and warms. Boiled with figs, water, honey and rue, and taken as a drink it helps pneumonia, asthma, internal coughs, mucus, and orthopnoea [type of asthma], and kills worms. Licked with honey it does the same. A decoction (taken as a drink with vinegar and honey) expels thick fluids through the bowels. It is eaten with green figs (pounded into small pieces) for emptying the intestines, but it purges more forcibly mixed with cardamom, iris, or irio [irinum?]. It causes a good colour. It is daubed on with figs and saltpetre [potassium nitrate] for the spleen and dropsy, but with wine for inflammation. Applied with warm water it dissolves bruises. With a decoction of figs it is an excellent gargle for a synanchic [abscessed] throat. Boiled with vinegar and used as a lotion it soothes toothache. The smoke being inhaled, it dissolves windiness around the ears. The Latins call it hyssopum, it is also called later or cassiala, and the Egyptians call it pesalem.

In the Monastic Medicine of the Middle Ages, Saint Hildegard von Bingen wrote of Hyssop:

Hyssop is of a dry nature and is moderately hot.  It is of such great strength that even a stone is not able to withstand it, and it grows wherever it is sown.  Eaten often, it purges the weak and stinking foam of all humors, just as heat, boiling in a pot throws off foam.  It is useful in all foods.  It is more beneficial pulverized and cooked than raw.  When it is eaten the liver becomes lively, and it cleanses the lungs somewhat.  One who coughs and has pain in the liver, or one who suffers from congestion in the lungs, or who suffers from both conditions, should eat hyssop with meats or lard, and he will be better.  Anyone who eats hyssop with only wine or water is harmed more than helped by it.  One who ails in his liver or lungs should take licorice, and more cinnamon than licorice, and more hyssop than the other two, and more fennel than the other three.  He should cook this in a new pot, with sufficient honey to overcome the bitterness of the herbs.  He should cook this vigorously.  He should keep the herbs in the pot for nine days and as many nights, then strain it through a cloth and drink it.  If he has great pain in his liver or his lungs, he should drink it every day for nine days.  Before drinking it in the morning, he should eat a little something then drink.  He may eat a sufficient amount at night, and when he goes to bed he may drink some of it.  If, however, he has moderate pain in his liver or lungs, he may do the same thing for three days.  Let him do this often and he will be cured, unless God does not wish it.

B. The same made with figs, water, honey, and rue, and drunken, helpeth the inflammation of the lungs, the old cough, and shortness of breath, and the obstructions or stoppings of the breast.

C. The syrup or juice of Hyssop taken with the syrup of vinegar, purgeth by stool tough and clammy phlegm, and driveth forth worms if it be eaten with figs.

The herb is Jupiter's, and the sign Cancer. It strengthens all the parts of the body under Cancer and Jupiter; which what they may be, is found amply described in my astrological judgment of diseases. Dioscorides saith, that Hyssop boiled with rue and honey, and drank, helps those that are troubled with coughs, shortness of breath, wheezing and rheumatic distillation upon the lungs; taken also with oxymel, it purges gross humours by stool; and with honey, kills worms in the belly; and with fresh and new figs bruised, helps to loosen the belly, and more forcibly if the root of Flower-de-luce and cresses be added thereto. It amends and cherishes the native colour of the body, spoiled by the yellow jaundice; and being taken with figs and nitre, helps the dropsy and spleen; being boiled with wine, it is good to wash inflammations, and takes away the black and blue spots and marks that come by strokes, bruises, or falls, being applied with warm water. It is an excellent medicine for the quinsy, or swellings in the throat, to wash and gargle it, being boiled in figs; it helps the toothache, being boiled in vinegar and gargled therewith. The hot vapours of the decoction taken by a funnel in at the ears, eases the inflammations and singing noise of them. Being bruised, and salt, honey, and cummin seed put to it, helps those that are stung by serpents. The oil thereof (the head being anointed) kills lice, and takes away itching of the head. It helps those that have the falling sickness, which way soever it be applied. It helps to expectorate tough phlegm, and is effectual in all cold griefs or diseases of the chests or lungs, being taken either in syrup or licking medicine. The green herb bruised and a little sugar put thereto, doth quickly heal any cut or green wounds, being thereunto applied.

Hyssop is a name of Greek origin. The Hyssopos of Dioscorides was named from azob (a holy herb), because it was used for cleaning sacred places. It is alluded to in the Scriptures: 'Purge me with Hyssop, and I shall be clean.'

Medicinal Action and Uses---Expectorant, diaphoretic, stimulant, pectoral, carminative. The healing virtues of the plant are due to a particular volatile oil, which is stimulative, carminative and sudorific. It admirably promotes expectoration, and in chronic catarrh its diaphoretic and stimulant properties combine to render it of especial value. It is usually given as a warm infusion, taken frequently and mixed with Horehound. Hyssop Tea is also a grateful drink, well adapted to improve the tone of a feeble stomach, being brewed with the green tops of the herb, which are sometimes boiled in soup to be given for asthma. In America, an infusion of the leaves is used externally for the relief of muscular rheumatism, and also for bruises and discoloured contusions, and the green herb, bruised and applied, will heal cuts promptly.

The infusion has an agreeable flavour and is used by herbalists in pulmonary diseases.

It was once much employed as a carminative in flatulence and hysterical complaints, but is now seldom employed.

A tea made with the fresh green tops, and drunk several times daily, is one of the old fashioned country remedies for rheumatism that is still employed. Hyssop baths have also been recommended as part of the cure, but the quantity used would need to be considerable.

Plants for A Future gives us Hyssop’s current use and a warning that it should not be used by pregnant women:

Medicinal use of Hyssop: Hyssop has a long history of medicinal use and was so highly esteemed in the past that it was considered to be a virtual cure-all. Currently an undervalued herb, it is often used as a household remedy, particularly as an expectorant and stomach tonic. It has a positive effect when used to treat bronchitis and respiratory infections, especially where there is excessive mucous production. Hyssop can irritate the mucous membranes, so it is best given after an infection has peaked, when the herb's tonic action encourages a general recovery. The plant should not be used by pregnant women, however, since in large quantities it can induce a miscarriage. The leaves and flowering tops are antiseptic, antitussive, astringent, carminative, diaphoretic, emmenagogue, expectorant, pectoral, sedative, stimulant, stomachic, tonic and vasodilator. The plant can be harvested when in full flower and dried for later use. A tea made from the leaves is used in the treatment of flatulence, stomach-aches, upper respiratory tract infections, coughs in children etc. A poultice made from the fresh herb is used to heal wounds. The essential oil is used in aromatherapy. Its keyword is "Stability". This oil should not be used on people who are highly strung as it can cause epileptic symptoms. The essential oil should not be used internally except under professional supervision.

Obviously Hyssop was once among the most esteemed of herbs.  Yet, how often have you been recommended Hyssop by an herbalist or found it listed in a modern herbal book?  Indeed, even the “Lost Book of Herbal Remedies”... which is a very good herbal, even if the title is ridiculous “click bait” as none of the information presented has ever been “lost”, mentions only Anise Hyssop (Agastache foeniculum), which is an entirely different plant.  We can only ponder why Hyssop fell out of use.  Perhaps, in the New World, other nativie plants were simply closer at hand.  Well, as  Julia Sugarbaker used to say in the classic southern sit-com, “Designing Women”, “I for one” believe this herb belongs in my garden.  Besides, I got dumped by a beautiful and remarkable young lady recently… perhaps, I should follow Saint Hildegard’s advice - chicken roasted with Hyssop sounds quite tasty!


Author: Judson Carroll.  Judson Carroll is an Herbalist from the Blue Ridge Mountains of North Carolina. His weekly articles may be read at http://southernappalachianherbs.blogspot.com/

Read about Look Up: The Medicinal Trees of the American South, An Herbalist's Guide: https://southernappalachianherbs.blogspot.com/2021/06/paypal-safer-easier-way-to-pay-online.html