Jamaican Dogwood, A Bitter Herb That is Good For Pain... Sometimes

posted 1 year ago
Jamaican Dogwood, A Bitter Herb That is Good For Pain... Sometimes 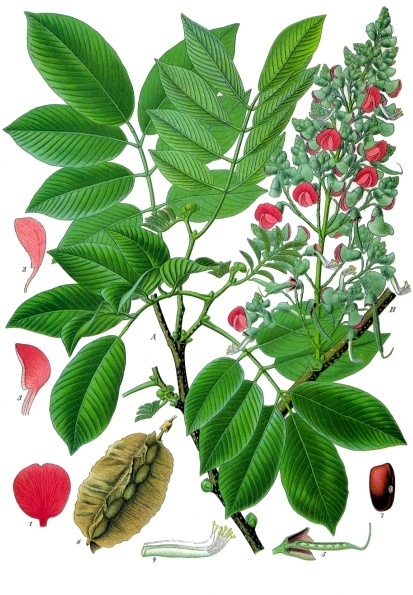 Jamaican Dogwood (Piscidia piscipula) is another bitter herb that has narcotic properties, but unlike Bugle, its actions are very different and not all who take it experience its sedative, antispasmodic and pain reducing effects.  According to the late herbalist, Michael Moore,  Jamaican Dogwood is primarily used for diminishing referred pain. It is somewhat similar to an opiate for certain people, but does not work for everyone.. like only 50% of people. It is a Central Nervous System sedative, and should not be combined with opiates.

He wrote in SPECIFIC INDICATIONS FOR HERBS IN GENERAL USE:

Jamaican Dogwood is a “New World” herb and as such, does not have a long history in European herbalism.  Mrs. Grieves wrote of it in 1931:

In some subjects it cures violent toothache, neuralgia and whooping-cough and promotes sleep, and acts as an antispasmodic in asthma. It also dilates the pupil and is useful in dysmenorrhoea and nervous debility. In other subjects it only causes gastric distress and nausea; over doses produce toxic effects.

Mrs. Grieves dates its use in the pharmacopoeia of her era as beginning in 1844.  That led me to investigate its use in Resources of The Southern Fields and Forests, a classic work of the Civil War era, in which that reference was found:

JAMAICA DOGWOOD, The piscidia is said to be used in America for stupefying fish, which are taken as readily by this means as with nux vomica. Wilson's Kural Cyclopaedia. It yields a highly narcotic and diaphoretic tincture. The powdered bark relieves toothache. To the above, which was contained in the first edition of this work, I add the following from the 12th Ed. of the U. S. Disp.: Dr. Wm. Hamilton, of Plymouth, England, in a communication to the Pharm. Journ. iv, Aug., 1844, speaks of this plant as a powerful narcotic, capable of producing sleep and relieving pain in an extraordinary manner. When a resident of the West Indies he had observed its effects as a narcotic in taking fish of the largest kind. He was induced to try it as an anodyne in tooth- ache, and he found a saturated tincture exceedingly efficacious, not only affording relief when taken internally, but uniformly curing the pain when introduced upon a dossil of cotton into the carious tooth. The bark of the root to be effectual, should be gathered during the period of inflorescence in April. When chewed, it has an unpleasant acrimony like mezereon. It yields its virtues to alcohol, but not to water. He prepared the tincture by macerating an ounce of the bark in coarse powder, in four fluid ounces of rectified spirit, for twenty-four hours, and then filtered it. The dose is a fluid drachm. He first tried it on himself, when laboring under severe toothache, taking the quantity mentioned in cold water on going to bed. He first felt a violent sensation of heat internally, which gradually extended to the surface, and was followed by profuse perspiration with profound sleep for twelve hours. On awaking he was quite free from pain, and without the unpleasant sensations which follow a dose of opium.

King’s American Dispensatory of 1898 tells us:

Action, Medical Uses, and Dosage.—Jamaica dogwood possesses active properties, its chief uses being to control pain and to produce sleep. Dr. Isaac Ott (see Pharmacology of Newer Materia Medica, p. 597), who made extensive experiments with the drug, declares its physiological effects to be essentially as follows: It increases the salivary and cutaneous secretions; slows the pulse, increases the arterial tension, succeeded by a fall of tension due to a weakening of the heart; dilates the pupils, except when passing into a state of asphyxia, when contraction takes place; it does not affect the irritability of the motor nerve fibers, nor does it attack the peripheral sensory nerve endings; it reduces reflex action by stimulating Setschenow's centers, and induces a tetanoid condition by stimulation of the spinal marrow; finally, he pronounces it narcotic to frogs, rabbits, and men. Piscidia destroys life by causing heart failure or by arresting respiratory action. Unpleasant results have been occasioned by even small doses of piscidia; among these are nausea, vomiting, headache, etc. Convulsions were provoked in the case of a woman who had been given a ½- drachm dose for hemicrania. The drug is recommended to replace opium, chloral, and similar narcotics. Dr. Hamilton (Burnett's Outlines, p. 684) states that a tincture of the bark of this tree is, the same as the bark itself, astringent and irritating. He also observes that it is most powerfully and remarkably narcotic and diaphoretic, and that its local application is a specific in removing toothache. For the latter purpose it has also been applied locally and given internally at the same time, in irritation of the dental pulp, inflammation of the peridental membrane, alveolar abscess, as well as in other painful affections of the mouth. Burns, scalds and hemorrhoids have been relieved by it, while a solution of it has been recommended as an injection in gonorrhoea (Fearn). Internally administered, it relieves pain, overcomes spasm, allays nervous excitability, and induces sleep. It is a favorite remedy in prolonged insomnia, particularly in the aged, and in those of an excessively nervous temperament. It should at least be given the preference over opiates until its utility or non-utility is established. It has rendered good service in neuralgia—particularly sciatica, abdominal neuralgia, renal neuralgia, migraine, and tic-douloureux. It allays the pain of cholera morbus, and the gastro-enteralgia sometimes following enteric fever. It also relieves painful spasms of the muscles and acute articular and other forms of rheumatism. In the disorders of women it has rendered excellent service in alleviating neuralgic and other forms of dysmenorrhoea and in various pelvic neuroses. With viburnum, it has been administered to check false labor-pains and threatened abortion. Hysterical convulsions, delirium tremens and the insomnia of insanity have yielded to it. In the pain of carcinoma and that attending fractures, it has been preferred by some to opium and other anodynes. It relieves the spasmodic element of pertussis and asthma, and has been lauded for reflex coughs and the cough of spasmodic and chronic bronchitis, and pulmonary consumption. Foltz (Webster's Dynam. Therap., p. 595) praises it in neuralgia of the eyeball (where opium was not tolerated) and in supraorbital neuralgia, the dose given being from 10 to 20 drops of the fluid extract every 2 or 3 hours. He speaks lightly of it for the relief of pain in acute catarrh of the tympanum. Others speak highly of it in acute abscess of the external auditory canal and in iritis, panophthalmitis, and other inflammatory and painful affections of the eye. The dose of the fluid extract ranges from 10 drops to 2 fluid drachms; of specific Jamaica dogwood, 10 to 60 drops.

From King’s Dispensatory, we may understand why Michael Moore advised caution with this herb.  7 Song, one of Moore’s better known students, states:

I have become an admirer of Piscidia as a medicinal plant, one I am glad to get to know and apply clinically. I have only used it in tincture form, so all discussion of it here is about it in tincture form. Piscidia is a very serviceable pain medicine, especially for general body pains (such as after an accident or a jousting tournament) and as an adjunct for skeletal muscle pain. Its sedative effects are minimal which makes it useful for daily use as it does not impair the cognitive process. It is an excellent first aid remedy because when it works (no one plant works all the time) it works reasonably swiftly and can take the edge off of acute pain. In other words it is useful plant for a wide variety of pain. It combines well with other plants (see Combinations below). Some plants are stronger pain relievers such as Valerian (Valeriana officinalis), or Hops (Humulus lupulus), but they may leave the patient feeling lethargic and not thinking clearly, while Piscidia does not have this effect commonly. That can also be a disadvantage as some times, such as after a traumatic accident, it is helpful to the mental edge off, but then it can be combined with them.

Another important attribute about Piscidia is that it is well tolerated with unwanted side effects being uncommon. This gives more room to play around with dosages when using it for treating pain.

For me, it is a classic first aid plant. It can be offered to someone soon after they arrive to a first aid station, even while still evaluating the extent of an injury and the dosage can be incrementally increased.

As herbalists, it is our responsibility to learn both the virtues of a plant and its potential min-use.  As with Bugle, I repeat,  “Moderation in all things” is the key to health. The herbs such as Jamaican Dogwood are what we might describe as highly energetic, meaning that its effects are dependent upon the individual and their nature.  Apparently, it does very little for some.  For others, it may be strongly narcotic.  Likely, many are in between.  Any alternative to harmful and addictive prescription painkillers and sedatives should be explored, but sober judgement must be used.  My old friend, herbalist Barbara Kralis also worked a great deal in emergency medicine - she was an EMT.  Like 7 Song, she found Jamaican Dogwood excellent for treating pain in first aid situations, and for use in the long term treatment of chronic pain.  I think it is incumbent upon us, as herbalists, to undertake further research.

Read about Look Up: The Medicinal Trees of the American South, An Herbalist's Guide: https://southernappalachianherbs.blogspot.com/2021/06/paypal-safer-easier-way-to-pay-online.html


The information on this site is not intended to diagnose or treat any disease or condition. Nothing on this site has been evaluated or approved by the FDA. I am not a doctor. The US government does not recognize the practice of herbal medicine and their is no governing body regulating herbalists. Therefore, I'm just a guy who studies herbs. I am not offering any advice. I won't even claim that anything I write is accurate or true! I can tell you what herbs have "traditionally been used for." I can tell you my own experience and if I believe an herb helped me. I cannot, nor would I tell you to do the same. If you use any herb I, or anyone else, mentions you are treating yourself. You take full responsibility for your health. Humans are individuals and no two are identical. What works for me may not work for you. You may have an allergy, sensitivity or underlying condition that no one else shares and you don't even know about. Be careful with your health. By continuing to read my blog you agree to be responsible for yourself, do your own research, make your own choices and not to blame me for anything, ever.