What Is In A Name: Lady's Mantle 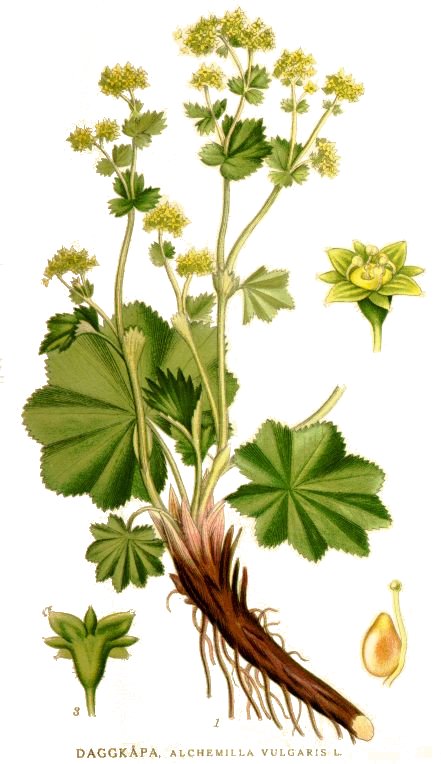 There has been some controversy and debate among historians whether Pliny and Dioscorides may have referred to Lady's Mantle under a different name.  The Latin name may imply that knowledge of its use originated among the Arabic herbalists, in their interaction with the Roman empire.  Alchemilla vulgaris derives from the Arabic word for alchemy.  This would indicate that it was considered to be a powerful herb featured in the apothecaries of the Arabic speaking ancient world.  It seems that Lady's Mantle is an herb that entered into western herbalism through the Monastic Medicine of the Middle Ages which led to its common name - so useful was the herb that it was named in honor of the Mother of God..

Mrs. Grieves gives us an explanation of the history of the name:

The generic name Alchemilla is derived from the Arabic word, Alkemelych (alchemy), and was bestowed on it, according to some old writers, because of the wonder-working powers of the plant. Others held that the alchemical virtues lay in the subtle influence the foliage imparted to the dewdrops that lay in its furrowed leaves and in the little cup formed by its joined stipules, these dewdrops constituting part of many mystic potions.

The common name, Lady's Mantle (in its German form, Frauenmantle), was first bestowed on it by the sixteenth-century botanist, Jerome Bock, always known by the Latinized version of his name: Tragus. It appears under this name in his famous History of Plants, published in 1532, and Linnaeus adopted it. In the Middle Ages, this plant had been associated, like so many flowers, with the Virgin Mary (hence it is Lady's Mantle, not Ladies' Mantle), the lobes of the leaves being supposed to resemble the scalloped edges of a mantle. In mediaeval Latin we also find it called Leontopodium (lion's foot), probably from its spreading root-leaves, and this has become in modern French, Pied-de-lion. We occasionally find the same idea expressed in two English local names, 'Lion's foot' and 'Bear's foot.' It has also been called 'Stellaria,' from the radiating character of its lower leaves, but this belongs more properly to quite another group of plants, with star-like blossoms of pure white.

Father Johannes Künzle, in his classic work, Herbs and Weeds sought to make the Monastic Medicine available to the common people of central Europe in the early 1900s.  Along with Fr. Kneipp and Brother Aloysius, they fostered what we now call German Folk Medicine.  It was my great honor to work on a modern translation of Father Künzle's book with my co-author, Jolanta Wittib of Austria.  Together, we were able to to not only preserve this important work, but to provide our own modern commentary as practicing herbalists.  Below is an excerpt from our book, The Herbs and Weeds of Father Johannes Künzle:

The name alone indicates already part of the healing power of this herb. It thrives everywhere on the shady side, on streams, somewhat damp meadows, especially on the mountains up to the snow line. It has an elegant, noble sister: the alpine lady's-mantle (Alchymilla alpina), which has the same properties to an even greater extent; However, this only thrives in the Alpine region and is recognizable by its silver sheen.

It also heals fever, burns, suppuration and ulcers, which is why it cannot be more than enough recommended to women. Every woman after giving birth should diligently drink quite a lot of this herb for 8 to 10 days. Some children would still have their mother and many a beaten widower his wife if they had known this gift of God.

Furthermore, the herb, boiled and drunk a lot, takes fever and burns in case of broken ribs, knocks from wood, stone, iron, after severe falls. A great many people die from internal injuries; this herb quickly removes fever and burn, and speeds healing; but in this case drink a lot, 1 to 2 liter a day, depending on thirst. (Add sugar!)

Externally applied and crushed, lady’s mantle heals wounds, stabs, cuts. Children who always have weak muscles despite eating well will become strong with continued use of this tea.

The lady's mantle, drunk as tea, cures the diarrhea. This herb is of the highest value for cattle; fed dry, it heals diarrhea.

The tea from the lady's mantle is lovely and pleasant; mixed with cowslip (Primula Veris), it is even better than Chinese tea and is far healthier than this; it calms nerves and provides sound sleep and is a quick remedy for people who often get nauseous.

In case of obesity and a bloated body, provided this is not due to abundant food and lack of exercise, the alpine lady's-mantle (Alchymilla alpina) offers help if it is used for a long time.

Collect lady’s mantle from May to July, dry it well in the sun and keep it dry!  What a healing power has the benevolent Creator bestowed on this delicate herb.

Jolanta Wittib: I am a woman, thus I always make sure that I have enough dried Lady’s mantle at home to last throughout a year. When I go on mountain tours, I bring home the Alpine lady’s mantle which we call a silver mantle. It really has a silver shine and is believed to be much more powerful than the green one.

Women drink lady’s Mantle tea after a child’s birth; for menstruation cramps (in a mixture with chamomile and/or fennel, or caraway seeds). For menopause women prefer the Alpine one, often in a mixture with red clover (trifolium pratense).

Lady’s mantle’ taste is quite boring, that is why I would mix it with other “female” herbs like lemon balm, lavender or rose petals, or, as Father Künzle recommended with cowslip - this gently smelling spring herb which calms down the nerves, when needed.

Have you heard of and seen the magic water drop in the middle of the leave? No, it is not a drop of dew. It comes from the inside of the herb. There are many stories and legends about this drop. They say that Cleopatra washed her face with these drops... that alchemists used it as heaven water... I drink this drop when I see one.

Judson Carroll: Lady’s Mantle is listed as alterative, which means it restores proper function of the body, gradually bringing one back to health. It is antirheumatic, referring to the swelling of joints such as in arthritis. It is astringent (tightening or restoring tone to tissue) and diuretic (reducing fluid). It is an emmenagogue, meaning that it stimulates menstruation by increasing blood flow. The herb is febrifuge (breaks a fever), sedative (calming), styptic (helps stop bleeding), tonic (strengthening/balancing) and vulnerary (meaning it helps heal wounds). Few plants offer more benefit, especially to women.

Read about his new book Look Up: The Medicinal Trees of the American South, An Herbalist's Guide: https://southernappalachianherbs.blogspot.com/2021/06/paypal-safer-easier-way-to-pay-online.html


The information on this site is not intended to diagnose or treat any disease or condition. Nothing on this site has been evaluated or approved by the FDA. I am not a doctor. The US government does not recognize the practice of herbal medicine and their is no governing body regulating herbalists. Therefore, I'm just a guy who studies herbs. I am not offering any advice. I won't even claim that anything I write is accurate or true! I can tell you what herbs have "traditionally been used for." I can tell you my own experience and if I believe an herb helped me. I cannot, nor would I tell you to do the same. If you use any herb I, or anyone else, mentions you are treating yourself. You take full responsibility for your health. Humans are individuals and no two are identical. What works for me may not work for you. You may have an allergy, sensitivity or underlying condition that no one else shares and you don't even know about. Be careful with your health. By continuing to read my blog you agree to be responsible for yourself, do your own research, make your own choices and not to blame me for anything, ever.