sad news...yesterday a contract was signed to build a highway through the valley of novi vinodolski,
and thus my farm.

I knew about the project for some time, because i recieved a letter that informed me about a planned dispossenion of about 400m² of my farm in spe,
because they want to build a highway there.
I was also told that i can pick a company to make a value estimation, however when i recieved the letter, the deadline for doing so already passed,
which should not be the main issue here.

So i did the first thing any permie would do in this situation and inquired the elaboration on the ecological impact of the project, which i still have not recieved!

Then this weeked i learned from the newspaper that they want to sign the contracts and emailed the local government about how
the contracts must not be signed before the citizens had access do the project documentation.

The reaction was basically this:


However pulling so many levers resulted in me recieving some parts of the project dokumentation that i inquired earlier,
but i have not yet the legal permission to distribute those (i am working on it).

What is publicly available is the "Prostorni plan", which is basically a zoning plan made by the town: 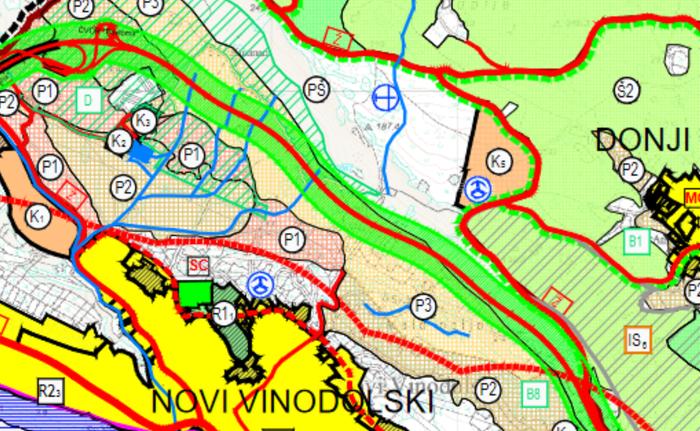 zoning plan
The big long green stripe with hte red line is the area they want to build the highway on.
P1 is "very valueaably arable land", P2 is "valueable arable land" and P3 is "other arable land".
I also inquired what the exact criteria for this definition are.
More details for the croatian speaker:
other plans

What is important to know, is that many locals want the Highway,
because traffic through the city is a katastrophe in summer (they claim up its to 16000 cars/day).
I believe this is false advertising, because once there is a fee to use the highway,
many locals will drive through the city again, while  A LOT more traffic which currently uses
other highways will go there. Catastrophe!

Now you might be like "Oh that dude just doesn't want the highway in his area", but the situation is more complicated than that,
because that highway does not potentially pollute just any arable land, it would be most of the arable land in the region.

Let me elobarote on that.

We are talking about karst geology here. This means the wider area is composed of waterpermeable limestone, so any water that is not
held by organic matter (which is usually negligible low because the forrest had been clear cut by the romans) just disappears.
On top of that it is mediterrean climate, so it mostly only rains during the winter.
So how did people even survive there?

Well you se there is a specifc thing in karst geology which is called a "dolac" and another thing called "dolina".
Dolac is a natural roundish depression which accumulates sediments...this may inlcude clay which then results in a waterimpermeable layer
in an otherwise waterpermeable landscape of rocks and boulders.
So basically the oasis that got the growies on the table.

Please note that the surround area of this example dolac is for the most part one single parcel,
as it is pasture that was not viewd as precious enough for assignemt to indivudals.

Those dolac can easily be seen in the cadaster because you usually have normals sized parcels with straight lines, but the dolac
is so valuable that it was almost always an parcel of its own, thus the round shape. In more populated areas the dolac would even be more subdivied (see picture),
as every son of the family would inherit a piece of arable land, sometimes those parcels were only a few square meters big!
I have inlcuded a picture with an example.

But the highway does not go though a dolac, i is planned through a dolina (which is also translates to valley).
The main difference between dolina and dolac is that dolina is usually munch larger (thus valley),
and has an exit for the water which is usually accompained by a river or creek.
Do dolina is the large scale really good shit!
The name of the city reflects the importance, "Novi Vinodolski" translates to "New vine valley".

For the last decades locals stopped working the land because tourism seems munch more attractive.
The 5000 inhabitans that the city of Novi Vinodolski right now depend on tourism as THE bulk income stream.
This is not bad as long as they can go back to the life style of their grand parents, but the highway might make this impossible.
This Highway - especially when not build correctly and permaculturally integrated into the landscape - threats the basis on which locals sustained for thousands of years!

As i said i may not give you the building plans yet, so here is a sort description. 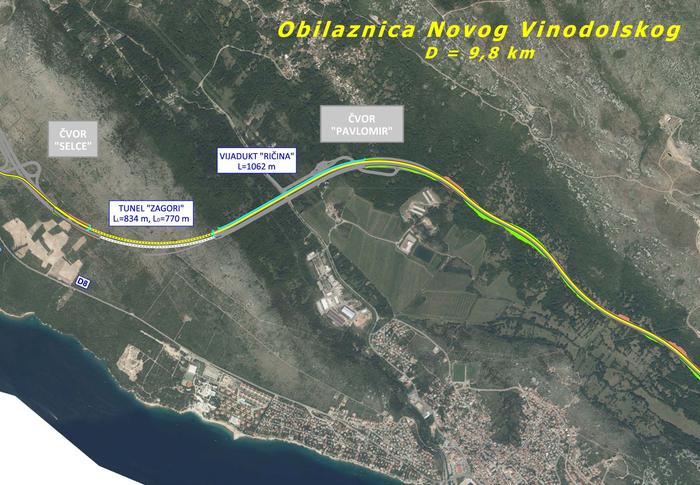 The highway comes from the seaside, goes through an mountain (Tunel "Zagori"), crosses the valley on bridge (viadukt "Ricina"),
and then contonues on the south-facing slope about 25 meters above the valley bottom.
It has four lanes, two passages over/under the highway and some water channels upslope of the highway.
It is not clear to me what they do with the existing springs.
There is no point in any further desctriptions now, i will try to post hte project dokumentation.

Well the zoning plan has beend decided, the "lokaciska dozvola" (permit of usage) has been issued and the contracts have been signed.
However the building permit has not been issued yet!
I think this is our best leverage point.

I do not believe that course of highway can be prevented at this moment, however had it been shifted just a couple
of kilometers more towards the inland the damage would have been munch less.

Now we need to make the best out it!
There will be a lot of machinery on site.
There will be lots of rocks for dry-stacking and lots of trees for hugels (mostly oak/maple).
And more (seasonal) water coming than most of you can possibly imagine.
I see a situation where Mollisons glorious water filtration system might first find a large scale application!

So making a permaculture plan for the valley that incoorporates the highway should be a priority.

Furthermore, we have to ask questions and make sure they are aware of possibles pollutions and take counter measures,
like regualr testing of quality of the building materials.

Along with the inquiry for the project documention, i already stated some questions which i will post here in the original language
for the sake of getting this post done, i will provide a translation later (unless someone volunteers to do it).

R. Han
Posts: 208
35
posted 1 month ago
And i just realized i forgot to mention they are building an new electricity line through the valley too!
Those are independent projects, and i bet they do not think about combining those.

In permaculture literature i have read, that your infrastructure should run under your streets/paths.

What do you think about suggesting to run the electricity lines underneath the highway?