land in south east of England

posted 1 year ago
Hi ill be imigrating to the uk at the begining of december and am starting to look for land ill be working in Surry so that general area. If anyone knows of anything please let me know I know from experience most farms are not sold by estate agents but by word of mouth within the comunity.  my first piece of land was teribly dificult to find but once I was part of the farming comunity i was regularly offered fields to rent or buy to expand my operation. Thanks

posted 1 year ago
After the second world war, Surrey was one of the poorest counties in the UK. Much of the soil was considered to poor to farm.  Great swathes were left and became forest and down-lands. There are the remains of abandoned villages in places where a two bed cottage will sell for millions. Everything changed with the growth of London, the M25 orbital motorway. Surrey is now probably one of the most expensive counties in the UK. Houses with big gardens get bulldozed and replaced with half a dozen houses all crammed in. I worked there in the early 90’s and eventually bought a tiny house in Leatherhead when it had just been voted one of the worst towns in Britain, so it was slightly cheaper than where we living in London. It got us on the property ladder and we managed to upgrade to something we couldn’t afford. We left Surrey and the UK nearly ten years ago, selling everything and still with a massive burden of debt.

I don’t want to be gloomy! It is a beautiful place as much of the forest and downs have been preserved. It has areas which are wild and close to London. Much of the land was protected by Greenbelt - a policy to stop the expansion of London. I don’t know how strong that legislation is but it continues to be eroded and threatened. I had many friends from SA though, who worked in IT sending money home with the awesome exchange rate at the time.

I worked for the National Trust as a volunteer for many years on land restoration. This might be a good road in. The wardens know a great deal and have connections with the farming community.

There are vineyards on the downs which now produce some exceptional wines. The climate is now more conducive to growing and producing ‘champagne’ than Champagne in France thanks to climate change. The French and other wine lovers have been buying up downland farms. You may be able to get viniculture work but the agricultural down-lands are probably too valuable to rent or sell. However, if there’s land that’s been bought as a hedge against the demise of Champagne then they might be available.

Another option is farmers markets and farm shops - there are lots dotted all over the county. Speak to them.

Guildford has an annual county fair which is more of a carnival / circus than other counties, however, last time I went, fifteen yers ago, there were still some old farmers turning up.

Zoopla is the default property searching website and app. This will at least give you an idea of prices to buy / rent and which parts of the region are a little less expensive.

Have you thought about getting some PEP badges under your belt giving yourself additional credibility?

I wish you luck - I have many happy memories of my time in Surrey.

posted 1 year ago
If you're looking for land in Surrey try the horsey sites, Just remember you have nearly no hope of buying agricultural land at around £7-10k per acre and then getting permission to build on it. and if you want a house with land you'll not get much if any change from a million.

What are the rules on buying farmland in the UK I never had enough money to even look at it when I was there, here you cannot buy farmland unless you are a farm or it is next door to you.

Skandi Rogers wrote:Just remember you have nearly no hope of buying agricultural land at around £7-10k per acre and then getting permission to build on it.

Alas I think you missed a zero of the end of those numbers.

Good point on the horses - probably the other big agricultural crop along with wine.

posted 1 year ago
The land around Guildford has much steeper south facing slopes than north facing. The North downs are sedimentary rock that tips down to the north.

Here’s a cross section through Kent and Surrey is pretty similar. Guildford and North Downs is on the left side. 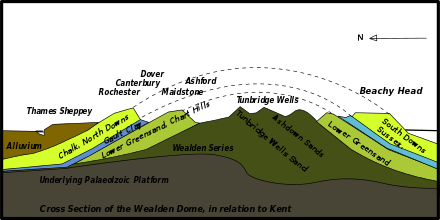 You can get an idea of the slope on Ordnance Survey maps which show contours when you zoom in. Their data is extremely accurate.

Here’s an area just to the west of Guildford showing the steep south-facing slopes and gentle north facing slopes.

6 acres for 120k of pasture sounds like a good deal. As mentioned, you won’t be able to build a habitable building on it.

posted 1 year ago
thanks interesting info on the slopes and their makeup. it going to be quite an adventure adapting from farming in hot dry south africa to cold wet england sure not going to miss going 6 months without ran though

Gives average farmland prices (unimproved) for the whole country, I didn't miss a 0.  It's hard to find but I did find one that is unfortunately under offer and probably to large anyway.


I do agree about most not actually being for sale, I know the field next to me, (approximately 1.5 acres) is available to buy if anyone asks, but it is not actually up for sale. And there are building plots adjacent that could also be bought but are not currently on the market.. But that is local knowledge, the best place to find that in the UK is the pub. go to the local pubs and tall to the bar staff and customers.

'm much further north than surrey and have a slight north facing slope, a slight slope to the North will not be a problem

You’re right - I do apologise - I was looking at much small plots.