Motherwort, an Herb for the Heart 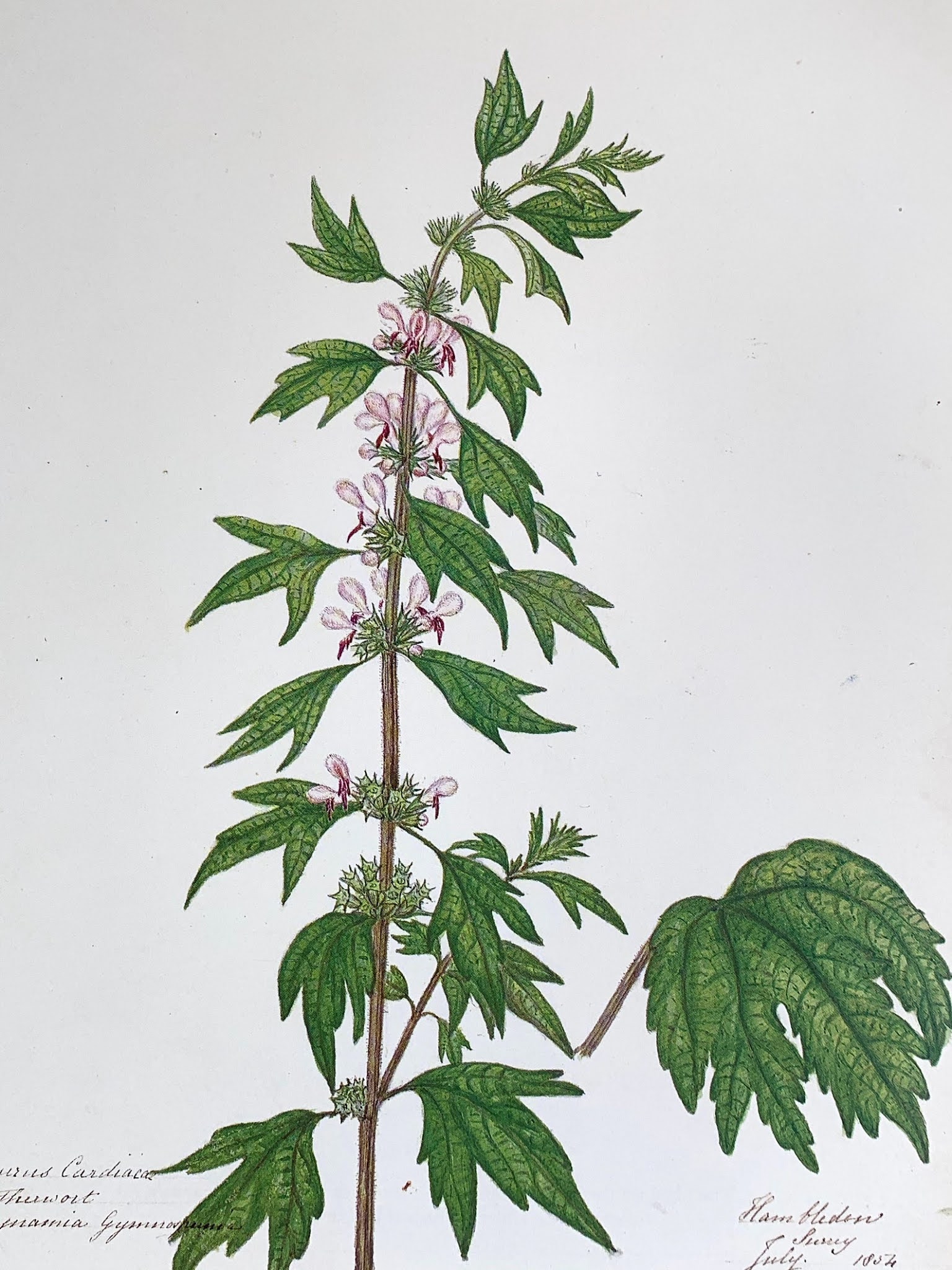 The Latin name of Mother wort, Leonurus Cardiaca, indicates its long use as a heart herb.  The other word means “Lion’s Tail”, which simply has to do with its appearance… and is rather fanciful as it doesn’t look any more like a lion’s tale than a dandelion looks like lion’s teeth (which is the inspiration for that name).  Although this herb bears a Greek name, there is no mention of it in the works of the ancient Greek herbalists.  As best I can tell, this is one we only begin to find mentioned herbals beginning in the 1500s.  Gerard described Motherwort and its uses in his delightfully written Herball, written in 1597.  However, the illustrations used by Gerard were sourced from the work of Jacobus Theodorus Tabernaemontanus, a hugely influential German physician and botanist.  I have yet to find English translations of Tabernaemontanus’ books, but I would wager a guess that Motherwort entered into British herbalism via the German tradition.

Motherwort bringeth forth stalks four-square, thick, hard, two cubits high, of an obscure or overworn red colour: the leaves are somewhat black, like those of Nettles, but greater and broader than the leaves of Horehound, deeply indented or cut on the edges. The husks are hard & pricking, which do compass the stalks about like whorls, or little crowns, out of which do grow purplish flowers, not unlike to those of Dead-Nettle, but lesser: The root is compact of many small strings, the whole plant is of a very rank smell and bitter taste.

It joyeth among rubbish, in stony and other barren and rough places, especially about Oxford; it profiteth well in gardens.

It flourisheth, flowereth, and seedeth from June to September: the leaves and stalks perish in winter, but the root endureth.

It is called in our age Cardiaca: in High Dutch, Hertzgesport: in Low Dutch, Hertegespan: in French, Agripaulme: in English, Motherwort. Some there be that make it a kind of Balm, it seems that it may be also referred to Sideritis herculana, or Hercules Ironwort.

Motherwort is hot and dry in the second degree, by reason of the cleansing and binding quality that it hath.

A. Divers commend it against the infirmities of the heart: it is judged to be so forceable, that it is thought it took his name Cardiaca of the effect.

B. It is also reported to cure convulsions and cramps, and likewise the palsy: to open the obstructions or stoppings of the entrails: to kill all kinds of worms of the belly.

C. The powder of the herb given in wine, provoketh not only urine, or the monthly course, but also is good for them that are in hard travail with child.

D. Moreover, the same is commended for green wounds: it is also a remedy against certain diseases in cattle, as the cough and murrain, and for that cause divers husbandmen oftentimes much desire it.

Culpepper, writing in the next century included Motherwort in his Complete Herbal, indicating that it had become a common garden plant and medicinal herb by his era:

Description. This hath a hard, square, brownish, rough, strong stalk, rising three or four feet high at least, spreading into many branches, whereon grow leaves on each side, with long foot-stalks, two at every joint, which are somewhat broad and long, as if it were rough or crumpled, with many great veins therein of a sad green colour, and deeply dented about the edges, and almost divided. From the middle of the branches up to the tops of them (which are long and small) grow the flowers round them at distances, in sharp pointed, rough, hard husks, of a more red or purple colour than Balm or Horehound, but in the same manner or form as the Horehound, after which come small, round, blackish seeds in great plenty. The root sends forth a number of long strings and small fibres, taking strong hold in the ground, of a dark yellowish or brownish colour, and abides as the Horehound does: the smell of the one not much differs from the other.

Place. It grows only in gardens with us in England.

Government and virtues. Venus owns the herb, and it is under Leo. There is no better herb to take melancholy vapours from the heart, to strengthen it, and make a merry, cheerful, blithe soul than this herb. It may be kept in a syrup or conserve; therefore the Latins called it Cardiaca. Besides, it makes women joyful mothers of children, and settles their wombs as they should be, therefore we call it Motherwort. It is held to be of much use for the trembling of the heart, and faintings and swoonings; from whence it took the name Cardiaca. The powder thereof, to the quantity of a spoonful, drank in wine, is a wonderful help to women in their sore travail, as also for the suffocating or risings of the mother, and for these effects, it is likely it took the name of Motherwort with us. It also provokes urine and women's courses, cleanses the chest of cold phlegm, oppressing it, kills worms in the belly. It is of good use to warm and dry up the cold humours, to digest and disperse them that are settled in the veins, joints, and sinews of the body, and to help cramps and convulsions.

Yet, Mrs. Gieves finds reference to Macer’s Herbal, which was compiled in Cheshire in the 14th century:

Old writers tell us that there is no better herb for strengthening and gladdening the heart, and that it is good against hysterical complaints, and especially for palpitations of the heart when they arise from hysteric causes, and that when made into a syrup, it will allay inward tremors, faintings, etc. There is no doubt it has proved the truth of their claims in its use as a simple tonic, not only in heart disease, neuralgia and other affections of the heart, but also in spinal disease and in recovery from fevers where other tonics are inadmissable.

In Macer's Herbal we find 'Motherwort' mentioned as one of the herbs which were considered all-powerful against 'wykked sperytis.'

While much historical mystery will likely continue to surround motherwort, the efficacy of its use is certainly well known.  Mrs. Grieves continues (writing in the 1930s):

As a tonic, it acts without producing febrile excitement, and in fevers, attended with nervousness and delirium, it is extremely useful.

Currently, Plants for A Future lists Motherworts uses as:

Motherwort is especially valuable in the treatment of female weaknesses and disorders, allaying nervous irritability, inducing quiet and passivity of the whole nervous system. It is also seen as a remedy for heart palpitations, it has a strengthening effect, especially on a weak heart. The antispasmodic and sedative effects promote relaxation rather than drowsiness. The leaves are antispasmodic, astringent, cardiac, diaphoretic, emmenagogue, nervine, sedative, stomachic, tonic and uterine stimulant. They are taken internally in the treatment of heart complaints (notably palpitations) and problems associated with menstruation, childbirth and menopause, especially of nervous origin. Although an infusion can be used, the taste is so bitter that the plant is usually made into a conserve or syrup. An alcoholic extract is said to possess superior action to valerian (Valeriana officinalis). The plant has been found effective in the treatment of functional heart complaints due to autonomic imbalance, and also as an anti-thyroid treatment, though it needs to be taken for several months for these effects to be noticed. The whole herb is harvested in August when in flower and can be dried for later use. It should not be prescribed in the earlier stages of pregnancy or where periods are heavy. A homeopathic remedy is made from the plant. It is used in the treatment of heart complaints, amenorrhoea, menopausal problems and flatulence.

Given the stresses of modern life… and the epidemic of heart disease and high blood pressure, such an herb world certainly be useful in our time.  Currently, there is a radio commercial that states, “...diabetes, high blood pressure, heart disease and anxiety meds… everybody’s on them.”  Unfortunately, that statement is all too true.  Side effects and over-prescription have become a leading cause of death in America.  Perhaps we should take comfort in herbs like Motherwort rather some of the expensive pharmaceuticals that may kill us… but I don’t wear a white coat, and as Edward Bernays (the father of propaganda and modern advertising) taught, people give instant credibility to anyone wearing a doctor’s white coat regardless whether what they say is true or if they are actually doctors.  It is a crazy old world!

His New Book is Herbal Medicine for Preppers, Homesteaders and Permaculture People


You can read about and purchase Herbal Medicine for Preppers, Homesteaders and Permaculture People here: southernappalachianherbs.blogspot.com/2021/10/herbal-medicine-for-preppers.html

Look Up: The Medicinal Trees of the American South, An Herbalist's Guide: https://southernappalachianherbs.blogspot.com/2021/06/paypal-safer-easier-way-to-pay-online.html


The information on this site is not intended to diagnose or treat any disease or condition. Nothing on this site has been evaluated or approved by the FDA. I am not a doctor. The US government does not recognize the practice of herbal medicine and their is no governing body regulating herbalists. Therefore, I'm just a guy who studies herbs. I am not offering any advice. I won't even claim that anything I write is accurate or true! I can tell you what herbs have "traditionally been used for." I can tell you my own experience and if I believe an herb helped me. I cannot, nor would I tell you to do the same. If you use any herb I, or anyone else, mentions you are treating yourself. You take full responsibility for your health. Humans are individuals and no two are identical. What works for me may not work for you. You may have an allergy, sensitivity or underlying condition that no one else shares and you don't even know about. Be careful with your health. By continuing to read my blog you agree to be responsible for yourself, do your own research, make your own choices and not to blame me for anything, ever.
Carla Burke
gardener

posted 2 weeks ago
One thing I've experienced, in using motherwort, is that it can bring on menses. If that's something needed, that's wonderful, but if you're perimenopausal or menopausal, it can be problematic, so you might want to use something else.

Carla Burke wrote:One thing I've experienced, in using motherwort, is that it can bring on menses. If that's something needed, that's wonderful, but if you're perimenopausal or menopausal, it can be problematic, so you might want to use something else.

Yes, it is very good for that - also not to be used during pregnancy for the same reason