posted 1 month ago
We have various things going on here in the next 12 months that will require a large outdoor work area. Some major internal redecoration, including repainting and restoring a bunch of kitchen units. We don't have a dedicated workshop space, so my dad and I are concocting a plan.

We have acquired an old army surplus parachute canopy and are going to rig it between two trees at one end of the lawn. Something like in this picture: I have used a few of these, rigged by others, over the years and have a few design points that I have noticed that we want to include.

1) Anchoring the outer edge directly to the ground, or tied out to trees, works poorly. You struggle to pull the canopy tight, and hangs poorly and blows around too freely in the wind. I think it is because the lines tend to pull the edges down, rather than out.

3) A rigid support in the middle is useful. I have seen an old bike wheel rim, with long bolt with an eye threaded through the quick release skewer as an anchor. It holds the centre open and even.

This picture gives an indication of how the pole and guy line configuration works. 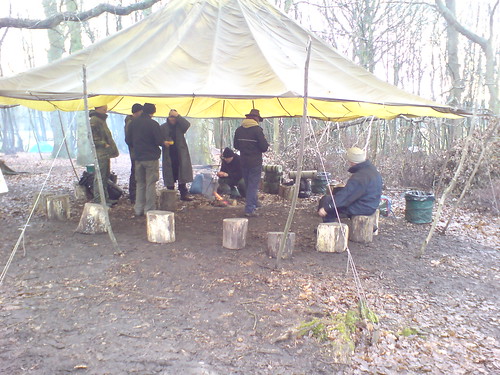 We are going to be working on this on and off for a while, before it finally goes up.

posted 1 month ago
Today we went up to our woods. Primary objective was to do a walk around and inspect for damage, following some big wind storms. We haven't lost any trees, which was fortunate. We harvested around 30 hazel poles, around 8ft long. We'll probably end up settling on shorter than that for final installation, but wanted extra length to work with. They are now seasoning in a shed.

I aim to make chunky wooden pegs and guy line tensioners over the next few weeks. I have access to:

Seasoned english oak logs - straight grain should be easy to split with a wedge, but likely very hard work to shape appropriately into a peg.  These logs are from a windblown tree that came down in the storm of '88. All the bark and sapwood has rotted away but the heart wood is perfect. It is amazing stuff after 30 year on the ground!

Green chestnut - easy to split and work with, easy to shape into a peg. Not particularly tough for driving into the ground until seasoned, and I'm not sure they will have long for that before we need to use them.

Seasoned chestnut logs (currently in our woodshed!) - same issue as the oak. Very hard to shape with hand tools.

I'll experiment and see what gives the best results with the least effort.

This is what I'm aiming for, I just wish I had that tool!

posted 1 month ago
I'll also need about 30 of these type of guy line tensioners: 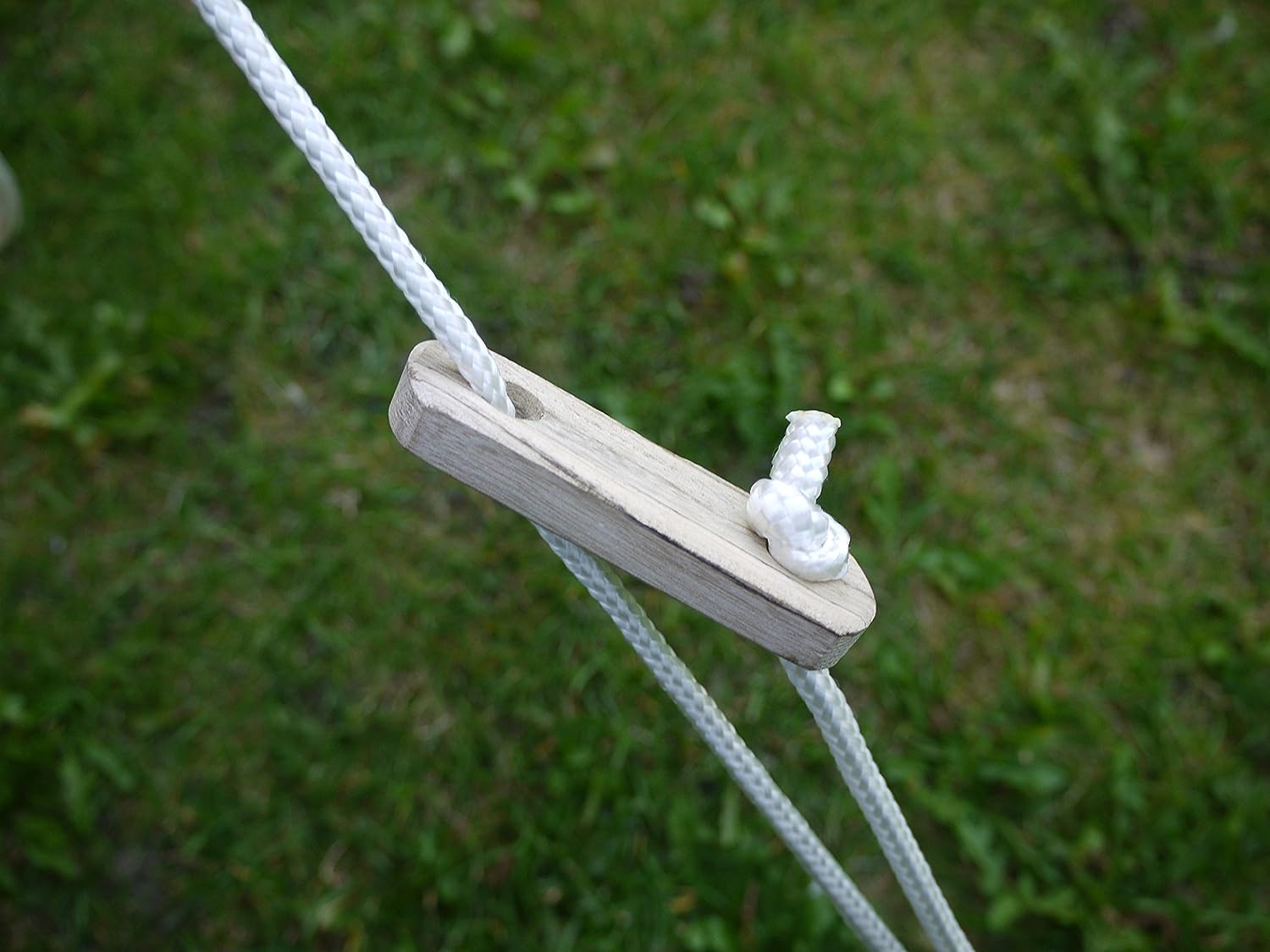 The seasoned oak would actually be a perfect candidate for these smaller pieces. I can split slabs with a froe from my larger diameter logs, use a plane to take them down to a smooth surface, and then cut and drill appropriately.

I have read that the holes should not be rounded off. The sharp edges help the cord to bite into the rope without slipping.

posted 1 month ago
I have a good idea how the rigging the top rope will work. It will first require climbing a couple of trees.

We need to be able to raise and lower the parachute easily, and also position it centrally in the gap. The image I have is of a pair ropes that go high up the trees on either side, round the trunk and then meet centrally in the space at a karabiner. The central karabiner can be lowered to the ground by loosening the two ropes, and the central anchor of the parachute (a bike wheel rim probably) can be clipped on/clipped off.

After some thought I think I need to make and install cambium savers into the two trees to protect the bark. A simple rope around a crotch would be easy, but I suspect that the parachute/rope combo will have a fairly large amount of play in the wind and any back and forth motion will wear away at the bark.

I will probably splice a 1.5m section of thick polyprop rope to have an eye at each end. This piece will wrap around the crotch/trunk section a couple of times and the ends will come together at another karabiner. The main rope will run through that, safely offset from the bark, with the tension diverted down to the ground. I think that should do a sufficient job of protecting the bark from friction.

I'm going to have to get hold of some thicker rope, some metal eyes to form the loops around, and some good splicing instructions. Three strand poly is supposed to be fairly simple and forgiving to practice splicing on. I won't be using such a fancy rope, or need the extra stuff, but this give the idea. The main rope goes through the metal work in the spliced eyes. In the tree climbing world these have fancy extras to make it possible to use a throw line to pull it into the tree, and then to also retrieve it without having to climb back up. I don't need any of that for a one time install-and-forget about it piece.

posted 1 month ago
I love this shelter idea, it's so simple and elegant, lightweight and strong. Perfect reuse for parachutes after their jumping lives are over.


Michael Cox wrote:I'll also need about 30 of these type of guy line tensioners:

...zip...
I have read that the holes should not be rounded off. The sharp edges help the cord to bite into the rope without slipping.

Rough hole edges are a good idea, we also wrap the rope around the knot to increase the friction like this: 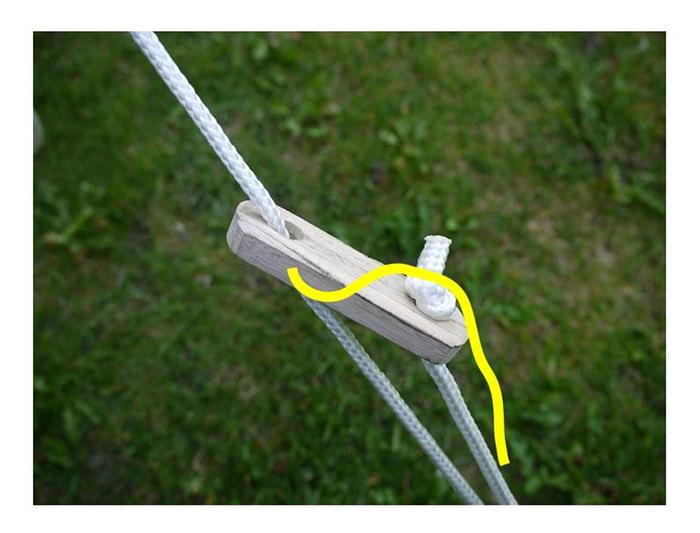 It really locks the guy ropes in place.

posted 1 month ago
I've used versions of the "tarp attached to a pole which is then staked out" system and found it very useful. However, I'm not familiar with parachutes, so I just want to mention that the biggest issues I've had is making sure rainwater drains off the tarp. Snow is even worse!

It sounds as if you have a way to collapse it if you are expecting bad weather, so that's a bonus.

You mention it will be for 12 months which means in the dark of winter. If there are specific paths you will tend to enter by, making sure those guy lines/pegs are well marked with something like flagging tape for safety is something to consider.

Please keep us posted as to how it actually works out.

Douglas Alpenstock
pollinator
Posts: 2010
Location: Canadian Prairies - Zone 3b
498
posted 1 month ago
Nice project! I am also improvising winter work areas. It's important to have a work area in the off season, preparing for the next. I am not inclined to sit around twiddling thumbs for months.

In my zone, I need more hard structure elements to deal with snowfall and its attendant weight. I scrounged a few old fabric garages, the metal bones only, and am adapting them to fit real world conditions. Mostly that means adding ribs to support the tarp --where the manufacturer should have put them in the first place. 16" centers.
Michael Cox
pollinator
Posts: 3254
Location: Kent, UK - Zone 8
496
I like...

posted 1 month ago
Parachute fabric is not fully waterproof, so it catches rain and deflects it to flow down the surface, but it does not form puddles. You can direct where it drips down by leaving lengths of string hanging vertically at the edges.

I’m really strong rain you get a strange mist/drizzle forming inside where the impact of drops hitting the surface dislodges a very fine spray. I would say 99% of the water stays on the outer surface though, so it tends to not be a problem.

One suggestion I have seen is to hand two parachutes - with a 12” separation between them. The outer catches the rain, the inner stops any fine drizzle that comes through.

I have 50m of hi-viz, glow in the dark paracord left from another project. I used it rigging a sleeping hammock, so I could find zippers etc in the dark.

Sections of that on guy lines etc would be an easy way to make it obvious.

posted 1 month ago
I unloaded the poles from the roof rack this morning. We have about 35, which should be plenty. A pretty random mix of bendy and straight poles, and various thicknesses. I think they will be fine for this purpose, but if not I can cut some better ones on another trip. 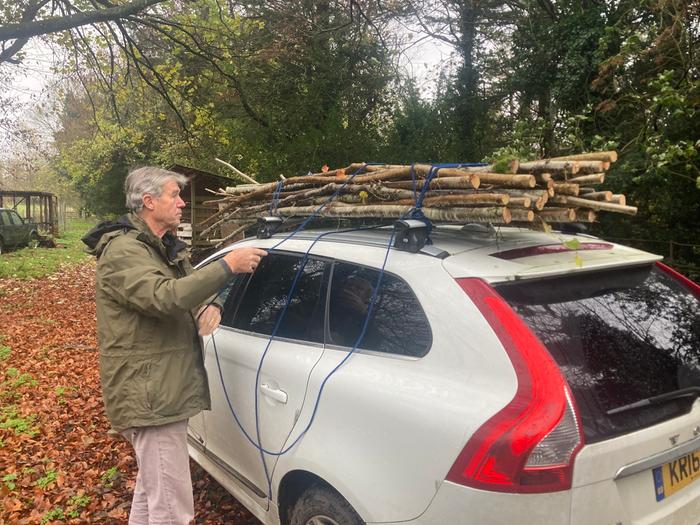