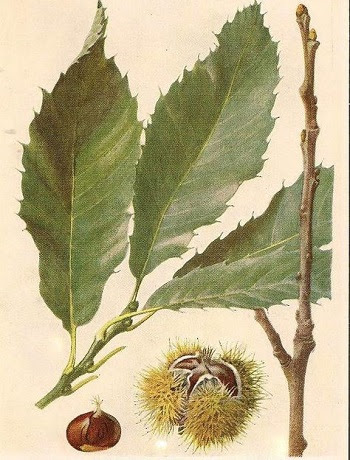 Native to my region are the Castanea dentata (American Chestnut), Castanea pumila (Chinkapin)

The Chinkapin likely has the same medicinal qualities of all other Chestnuts – I consider them interchangeable.  It is simply smaller and less well known internationally.

Unfortunately, the American Chestnut, is rarely seen in our time.  A blight nearly wiped them all out in the east, a century or so ago.  According to legend among the Appalachian Mountain folks, the blight was not a mere coincidence.  Chestnuts had been both enjoyed and used as a survival food in the mountains for centuries.  As timber interests encroached, and rail cars could carry nut crops to market for profit, landowners became more protective of their Chestnut trees.  The old-timers said that the blight was not due to contaminated imports, but from greed – it was a punishment for misusing a wild gift from God meant for all people.  Regardless, the blight was devastating.  Perhaps, our native Chestnut will adapt eventually.  There are some signs that may be beginning to happen.  However, we still have chinkapins, naturalized Asian Chestnuts and Asian/American hybrid Chestnuts.

If you grow them intentionally, or look around for wild chinkapins, you can still enjoy Chestnuts.   A couple of years ago, I spotted an old homestead on a large acreage in South Carolina.  The price was low enough to demand I drive down to take a look.   I found a beautiful old, early American farmhouse in the center of 200 acres of cotton fields.  Unfortunately, I have a strong toxic reaction to cotton poison, so that ruled the property out for me.  But, I still took some time to enjoy exploring the centuries old landscaping – Rose of Sharron bushes, Magnolias, Pecans, Camelias, Daffodils and Irises, Roses, yuccas, Crabapples, Pears… and several Chinkapins.  My mother and my dog stayed in the car while I explored.  Suddenly, my mother called me over and said, “We have to go!”.  I was enjoying the flowers and warm spring sunshine... I felt very peaceful and welcome, and was wishing the property would work out in spite of the agricultural chemicals.  So, I asked her why.  “This place is haunted!  I can hear two elderly sisters at the upstairs window, talking… excited to have guests for dinner!”

Well, my mother is a practical, not at all superstitious lady with advanced degrees and retired from a career in clinical Psychology.  I was shocked.  She was adamant we leave though, and my dog was acting creeped out, too! I’m pretty practical, as well… I often say that I may be the only herbalist who doesn’t see fairies or have two-way conversations with plants!  But, I did feel very welcome there, as if I was someone’s guest in a bygone era, when hospitality was far more valued than it is now.  “Well,” I answered as we drove away, “I don’t doubt you at all.  It’s a shame though, because those ladies must have been great gardeners to still have such beautiful grounds, especially since no one has lived in that house for over 70 years.  I guess they must be still taking care of it. It could be, we’d have gotten along just fine!”

Back to herbs though…

Aside from being a very nutritious and starchy nut, more like a potato than a nut in flavor and texture, and a beautiful wood for paneling, cabinets and furniture, the Chestnut does have medicinal value.  The American Chestnut was used to soothe the lungs and as both an expectorant and astringent.  This was taken as a tea made from the leaves.  The Chinese Chestnut has been used to settle the stomach and to treat diarrhea.  Culpepper mentioned the astringency of Chestnut, and its use against bleeding.  Mrs. Grieves wrote of its folk use in treating fevers and spasmodic coughs.  Long before that, Dioscorides also praised the astringency of Chestnut.


An Irish Herbal states of Chestnuts:

… They are good for chest problems and for arresting the bowels.  A paste made from them is good against coughing or spitting of blood.

Higher up there was a tall, old chestnut tree with fruits covered in prickly pods. The laplander was beside himself from surprise when the Dane opened the shell and showed him the fruit. "This tree provides food for millions of people because these fruits are extremely nutritious." "But why are these spikes all around?" Without this protection birds and squirrels and insects would eat everything up; the almighty Creator added this protective skin; when the fruit is ripe, it falls to the ground, the protective cover pops up and we can collect it. In the south they have even much taller trees; near the fire-spitting mountain Etna there is a chestnut tree under which 200 riders and their horses have enough space.

The southern part of Tirol is proud of sweet chestnut (Castanea sativa). They have beautiful, delicious seeds which one can use in so many ways. Every autumn there is a kind of a gourmet festival called Törggelen: you drink wine and eat roasted sweet chestnuts together with other specialties of the region like ham and cheese and bacon....Many people come just for that. It is very popular. And roasted chestnuts are so delicious.


Resources of the Southern Fields and Forests states:

CHESTNUT, (Castanea vesca, L.) Fairfield District, Florida and northward. In South Carolina only found in upper districts; one of our noblest trees.

The fruit of this tree and the chinquapin (C. ptimila') are well known. Eaten either raw or boiled. The roots contain an astringent principle; that of the chinquapin boiled in milk is much used in the diarrhoea of teething children. I would advise a tea made of this to be used extemporaneously in diarrhoea by soldiers in camp. The late Dr. Nelson Burgess, of Sumter District, S. C, informed me that at the recommendation of Dr. Jones, he has used the decoction of the root and bark of the chinquapin frequently as a substitute for quinine in intermittent and remittent fever, and with decidedly satisfactory results. I mention this hoping that it will be examined by others. I can have no clue to the reasons of its utility, regarding it heretofore simply as an astringent. Hot water is poured over the root and bark, and a large quantity taken during the twenty four hours. Dr. J. S. Unzicker, of Cincinnati, reports the use of a decoction of the leaves of the chestnut in hooping cough. He says that he has given it in about thirty cases, in all of which it gave decided relief in two weeks. He uses a decoction made with three to four drachms of the leaves in a pint of water given ad libitum. Caulophyllin, in doses of one-fourth to four grains, has also been much used recently in this disease and in asthma. Boston Med. and vSurg. J., Jan., 1868. See, also. Bates in Tilden's J. Mat. Med. Sept., 1868, article containing a history of the Blue Cohosh, (Caulophyllum.).

Action, Medical Uses, and Dosage.—Chestnut leaves appear to have been brought into notice, as a therapeutical agent, by Mr. G. C. Close, in a statement before the American Pharmaceutical Association, in 1862. Subsequently, they were employed by the late Dr. J. S. Unzicker, of Cincinnati, who valued them highly in the treatment of whooping-cough; since which, most favorable reports have been made by other physicians, as to their value. These leaves have, thus far, been employed mainly in the treatment of pertussis, in which malady they have proved remarkably efficient; but their manner of action has not yet been determined. It is very probable that they may be found useful in other irritable or excitable conditions of the respiratory nerves. Dr. Unzicker employed an infusion of the leaves, an ounce to a pint of boiling water, and administered this in tablespoonful, or small wineglassful doses, repeated several times a day. The fluid extract, when properly made, will be found reliable; its dose is from ½ to 1 fluid drachm, repeated 3, 4, or 5 times daily. Chestnut bark appears to possess astringent and tonic properties, and is used in some sections of our country as a popular remedy for fever and ague. Other forms of paroxysmal or convulsive cough resembling pertussis have been cured with it. Prof. Scudder (Spec. Med., p. 103), suggests a trial of the remedy in cases exhibiting unsteadiness of gait and a disposition to turn to one side.


This article is an excerpt from The Medicinal Trees of the American South, An Herbalist's Guide: by Judson Carroll

His New book is:

Medicinal Shrubs and Woody Vines of The American Southeast An Herbalist's Guide
Read About Growing Your Survival Herb Garden for Preppers, Homesteaders and Everyone Else: https://southernappalachianherbs.blogspot.com/2022/06/medicinal-shrubs-and-woody-vines-of.html

Available for purchase on Amazon: https://www.amazon.com/dp/B0B2T4Y5L6

Growing Your Survival Herb Garden for Preppers, Homesteaders and Everyone Else

Read About Growing Your Survival Herb Garden for Preppers, Homesteaders and Everyone Else: http://southernappalachianherbs.blogspot.com/2022/04/growing-your-survival-herb-garden-for.html

Available for purchase on Amazon: https://www.amazon.com/dp/B09X4LYV9R

The Encyclopedia of Bitter Medicinal Herbs:

Available for purchase on Amazon: www.amazon.com/dp/B09V3WCJM5

Available for purchase on Amazon: www.amazon.com/dp/B09P7RNCTB

Look Up: The Medicinal Trees of the American South, An Herbalist's Guide

The Herbs and Weeds of Fr. Johannes Künzle:

His weekly articles may be read at judsoncarroll.com