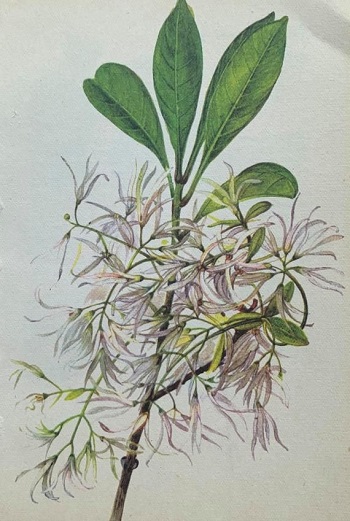 Fringetree is another of our unique trees. It is native to my region and very pretty. The medicinal use of this one, fortunately, has been documented.

Mrs. Grieves lists its use as, “Aperient, diuretic. Some authorities regard it as tonic and slightly narcotic. It is used in typhoid, intermittent, or bilious fevers, and externally, as a poultice, for inflammations or wounds. Is useful in liver complaints.”

Action, Medical Uses, and Dosage.—Chionanthus acts principally upon the abdominal glandular organs, and to some extent upon the venous system, relieving congestion. It is an alterative in the Eclectic meaning of that term. While its main action is upon the visceral glands, especially the blood-making organs, its influence is also quite marked in other secretive structures. Besides its pronounced catalytic properties, it is diuretic, tonic, and is said to be aperient and narcotic. It is exceedingly doubtful if the latter statement be true and its aperient property, if it possesses such, is the result of its cholagogue action.

Prof. King, in former editions of the American Dispensatory, states that in bilious and typhoid fevers, as well as in obstinate intermittents, the infusion of the bark of the root is efficient. While the remedy is now but very little used for these conditions, still some "old school" authors, as well as some trade catalogues, seem to have appropriated the above statements in regard to its use. Prof. King further states that it is an excellent tonic in "convalescence from exhaustive diseases," and that it also proves a good local application in external inflammations, ulcers and wounds. The use of an infusion of the bark of the root is directed, still it is doubtful whether such a preparation would be as efficient as an alcoholic form, for the resin, or the resinoid, the active constituent of the drug, is insoluble in water. Goss states that the infusion is wholly inert. Chionanthus improves the appetite, aids digestion, promotes assimilation, and is a tonic to the whole system. It never produces catharsis, but ptyalism has resulted from its use.

Chionanthus has been successfully used in mercurial cachexia, scrofula, and syphilis, though we possess better agents for these classes of disease. Yet, if the patient be sallow, or yellow, and has hepatic pains, the remedy will prove a valuable accessory agent in hastening the cure.

It is for its prompt and efficient action in hepatic derangements that we most value fringe-tree preparations. If there is any one thing true in specific medicine, it is that chionanthus has a decidedly specific action in jaundice. The credit of having brought this remedy before the profession, for the purposes for which it is now used, belongs to the late Prof. I. J. M. Goss, of Georgia, who, in 1843, tested it on himself while suffering from an attack of jaundice, and reported the result in an eastern journal. Since then it has come to be the first remedy thought of for this complaint. Goss considered it the best remedy for all cases of jaundice, not dependent on gall stones. On the contrary, Prof. Scudder was high in his praise of it, even when calculi are present. He recommended it in 10 or 15-drop doses during the paroxysm, and also gave it to prevent a recurrence. Nux or dioscorea may be associated with it when called for, the former in atonic conditions, with broad, expressionless tongue, the latter in irritative states, the tongue being red, pointed, and elongated, with prominent papillae. Hypertrophy of the liver, chronic hepatic inflammation, and portal congestion are speedily relieved by chionanthus. The remedy acts quickly, often removing in from 1 to 2 weeks, an icteric hue that has existed for months, and even years. Jaundice once cured by it is not apt to recur. There are two direct indications for the drug—jaundice, as evidenced by the yellowness of skin and conjunctiva; and soreness and pain, "hepatic colic," as pointed out by Prof. Scudder. The latter is by far the most direct indication. There is the dull, heavy pain in right hypochondrium, with a feeling of fullness and weight, deep-seated tenderness ad soreness on pressure, occasional hectic flushes, light colored feces, sometimes diarrhoea with frothy, yeasty stools, and urine scanty and high colored.

These conditions, with the icteric hue of skin and conjunctiva, call for chionanthus. Sometimes the patient writhes in pain, can not find rest in any position. Rx Specific chionanthus, gtt. x, every half hour, and apply a cloth wrung out of hot water. In dyspepsia, with hepatic complications; in irritative states of the stomach from "high living," and the use of alcoholic stimulants; and in general chronic inflammatory conditions of the duodenum, and ductus communis choledochus, chionanthus serves a useful purpose. It is also a good remedy in infantile dyspepsia. Rheumatic affections, with soreness in the region of the liver, and a jaundiced condition, are ameliorated by this drug. Its tonic effects on the chylopoietic viscera render it a good agent in general debility. In intestinal dyspepsia, with jaundice, thin, watery, yeasty alvine discharges, with previous abdominal distension: Rx Specific chionanthus, gtt. v, every 2 hours.

Chronic splenitis and nephritis are conditions in which fringe-tree often proves a good remedy; also in pancreatic disease, inflammatory or otherwise. Glandular diseases, with evidence of imperfect waste, often call for its administration. Chionanthus is of utility in uterine and ovarian congestion, when the usual hepatic symptoms calling for it are present. If there be fullness and bearing down in the pelvic viscera, especially a desire to frequently evacuate the rectum, combine it with specific helonias. Rx Specific chionanthus, specific helonias, aa flʒi; aqua q. s., ℥iv. Mix. Sig. Teaspoonful every 2 hours.

In female disorders it may also be combined with gelsemium, macrotys, or pulsatilla, when indications for these drugs are present. Some cases of uterine leucorrhoea are promptly benefited by it. Cleansing injections should be employed at the same time. As a poultice it will be found an excellent local application in external inflammations, ulcers, and wounds.

Dose, from ½ fluid ounce of the infusion to 2 fluid ounces, repeated several times a day, according to its influence upon the system. The usual dose of specific chionanthus (the best preparation), is 10 drops in water every 3 hours. Chionanthin, the so-called concentration, is of little value and is but seldom used. It was first prepared by Prof. Goss.

Plants for A Future states:

The fringe tree was commonly used by the North American Indians and European settlers alike to treat inflammations of the eye, mouth ulcers and spongy gums. In modern herbalism it is considered to be one of the most reliable remedies for disorders of the liver and gall bladder. The dried root bark is alterative, aperient, cholagogue, diuretic, febrifuge and tonic. It is used in the treatment of gallbladder pain, gallstones, jaundice and chronic weakness. A tincture of the bark was once widely used internally in the treatment of hypertrophy of the liver, jaundice, bilious headache, gallstones, rheumatism etc. The root bark also appears to strengthen function in the pancreas and spleen whilst anecdotal evidence indicates that it may substantially reduce sugar levels in the urine. Fringe tree also stimulates the appetite and digestion and is an excellent remedy for chronic illness, especially where the liver has been affected. A tea or a poultice can be made from the root bark for external use as a wash for wounds, inflammations, sores, infections etc. The roots can be harvested at any time of the year, the bark is peeled from them and is then dried for later use.

Physicians formally used 10 drops every three hours of tincture for jaundice. The tincture was one part bark by weight in five parts 50% grain alcohol and water. In the late 19th century Fringe tree bark tincture was widely employed by physicians who thought it relieve congestion of glandular organs and the venous system. It was employed for hypertrophy of the liver, wounds, nephritis, and rheumatism. Once considered diuretic, alternative, cholagogue, and tonic. American Indians use the root bark tea to wash inflammations, sores, cuts, and infections. Warning: overdose causes vomiting, frontal headaches, slow poults, etc

The Physicians’ Desk Reference for Herbal Medicine tells us:

Fringe tree, because of its saponin content, is said to have hepatic, cholagogue, diuretic and tonic effects. Unproven uses: French tree is used in the treatment of the liver and gallbladder conditions (including gallstones). North American folk uses include jaundice, hepatatrophy, wounds, and ulcers. No health hazards or side effects are known in conjunction with the proper administration of designated therapeutic doses.

As attractive as Fringetree is, it meets its match in Yellowwood. Unique to my region, this tree blooms with long trails of cascading flowers. I can find no documented medicinal use of this tree. It is in the legume family though and would be a beautiful addition to any landscape.

This article is an excerpt from The Medicinal Trees of the American South, An Herbalist's Guide: by Judson Carroll

His New book is: 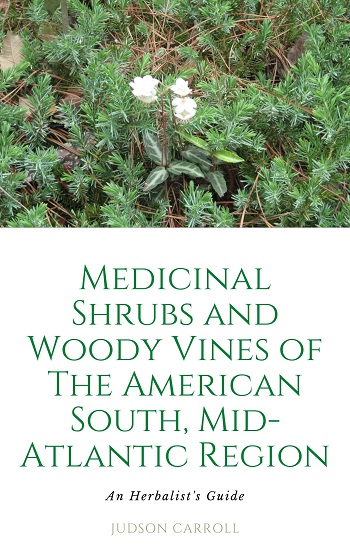 Medicinal Shrubs and Woody Vines of The American Southeast An Herbalist's Guide
Read About Growing Your Survival Herb Garden for Preppers, Homesteaders and Everyone Else: https://southernappalachianherbs.blogspot.com/2022/06/medicinal-shrubs-and-woody-vines-of.html

Available for purchase on Amazon: https://www.amazon.com/dp/B0B2T4Y5L6

Growing Your Survival Herb Garden for Preppers, Homesteaders and Everyone Else

Read About Growing Your Survival Herb Garden for Preppers, Homesteaders and Everyone Else: http://southernappalachianherbs.blogspot.com/2022/04/growing-your-survival-herb-garden-for.html

Available for purchase on Amazon: https://www.amazon.com/dp/B09X4LYV9R

The Encyclopedia of Bitter Medicinal Herbs:

Available for purchase on Amazon:

Available for purchase on Amazon: www.amazon.com/dp/B09P7RNCTB

Look Up: The Medicinal Trees of the American South, An Herbalist's Guide

The Herbs and Weeds of Fr. Johannes Künzle:

His weekly articles may be read at judsoncarroll.com