posted 7 years ago
- O. K., Now we have an official name for the cookstove that was an instant star of the Missoula Mt. work shop, and the 2nd part of the big reveal , I want to try to make a challenge, every one that visits this site,leave a quick comment! lets see if we can make this a hot topic and get it it's own forum page and show Paul W. and Ernie and Erica how much we want more - information - AND - pictures - ( HINT: stills off of the DVD ) ! So please leave a comment, I for one want to see a rocket stove made to be a cook stove ! Pyro - maticly yours , Allen L.

"It is a miracle that curiosity survives formal education." -- Albert Einstein

Aj French
Posts: 19
Location: Mahanoy City, PA
posted 7 years ago
Has there been any mention other than the podcast about the DVD?
allen lumley
pollinator
Posts: 4154
Location: Northern New York Zone4-5 the OUTER 'RONDACs percip 36''
61
I like...

posted 7 years ago
For the DVD of the Missoula Mt. work shop? - Some ones got to beard the Paul W. in his den !

Joe Morgan
Posts: 7
posted 7 years ago
Is the canning stove anything like the one I posted pics of last week? Gee, I hope so

If not, it would be great to see pics so I can adjust my design!

Joe
Scott Perkins
Posts: 69
7
posted 7 years ago
Joe-
I liked the drawings of your Rocket Canner but I was a bit confused. Do you have a fire box at the end of two what look
like Grills or BBQ pits? I can see an upward slanting tube running from the far right end to the combustion chamber
for the pot. Is that right?
Did yo use Sketchup for your 3D drawings ?
Joe Morgan
Posts: 7
posted 7 years ago
I'm trying to squeeze multi-functionality into one unit, so, yea, its confusing to me too

The wood structure will be a smoker that I will lift off when I want to use the rocket cooker. The firebox for the smoker is at the end of the long tube. This allows the smoke to cool before filling the smoke chamber. So that will be the cool smoker. I can do the hot smoking by using the short tube connected to the rocket cooker.

The grill space will double as a fireplace - the grates and lids will be removable.

But its the cooker that I'm concerned about. I hope its designed in a way that will quickly and efficiently bring 5-10 gallons of liquid to a boil.

posted 7 years ago
Well gee, it's nice to have fans. Sorry it took us so long to get back to monitoring these forums; we had a GREAT time meeting everyone on this tour, and we are also VERY GLAD to be running our little home fires again instead of the Subaru. (It survived the entire ordeal - barely - and is back in its natural home with our local mechanic until further notice.)

I don't think I managed to capture a picture of the darn thing, but I can give you a diagram. 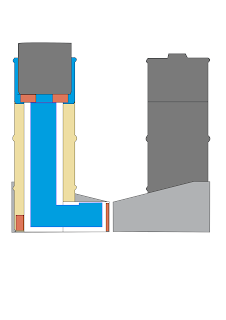 I do like the vertical feed; it self-tends much better than horizontal or diagonal feeds, AND you get better fuel-air mixing with most wood fuels. You can also burn pretty big chunks of wood once it gets going.

The rocket cookstove is not very much like a smoker - in that it is specifically designed not to smoke. However, ours did sometimes soot up the pots, given that it was burning pitchy pine and sometimes damp chunks at that.
But it is designed to make cooking outdoors a lot of fun, and in that, it shares something with your nicely laid-out smoker/grill.

The diagram is the first version, which was used to cook for 40 people during the workshop. The cook (who had never used a wood cookstove of any kind before) reported that it ranged between "high" and "freaky hot," but after a couple hours' practice, she was able to get some nice cooking temperatures by placing bricks under the pot (to slow and even out the heat), or by moving the pot skirt up and down to create a little gap.

The blue stuff (cutaway) is the path where the fuel goes in, fire burns sideways and up, and then the flame has to go right along the pot itself before it can escape.

The white and tan stuff is insulation (white is a refractory product called 'DuraBoard,' it's an experiment to see if it will out-last the more standard use of a couple chunks of stovepipe or some firebrick and perlite insulation).
The grey stuff is metal (a burned-off grease can and some lightweight sheet metal to hold the whole thing together so it can be carted around on a hand truck).
The reddish stuff are bricks; we added some down low to hold things in place and give it some better balance, and the cook added more up top to regulate the heat.

The pot skirt (also grey) is the cut-off bottom of another similar barrel, nests right inside the lip of the main one. We found that almost all the big cookpots on site were between 11 to 13 inches around, so a 14.5" pot skirt was plenty big enough to focus the flame around the pots. I left a little extra material on when we were cutting it off, and bent it down to make handles for the pot skirt - very nice if you need to switch the chili into the hay-box, take the pot skirt off, and switch to grilling or griddle-cooking.

For the propane fryer boil-off, we firmly attached the pot skirt down, added an extension to both heat riser and pot skirt, and another inch of insulation around the pot skirt(s).
We kept adding insulation until it beat the propane turkey fryer (MAN those things are loud! I have only used propane camp stoves and had not imagined just how much gas that thing could burn.)

We also found that it worked pretty well as a primitive forge; like the cook said, it was freaky hot.

So our next version will probably not be an 'improved' cooker, but an actual forge with a pass-through for making stuff in the hottest part of the heat riser / flame path.

The cook also found that a pair of welding gloves, and a barbecue tongs, were handy for getting things in and out of the heat.

Tyler August
Posts: 5
Location: Sudbury, Ontario
posted 7 years ago
Thanks for replying!
A rocket forge would be amazing. I cannot wait to hear how that goes.
Isaac Bickford
Posts: 101
Location: Okanogan County, WA
2
I like...

posted 5 years ago
Does anyone know if there has been any more development in this area? I learned of rocket stoves about 2 years ago and am just now fiddling in the hopes of having something available come fall for canning (last year was brutal for my wife to run the canner when it was approaching 90 deg. F in the house).

My stacked fire brick L shaped rocket stove technically functions, but is so low heat output that it would be useless for canning.
thomas rubino
gardener

posted 5 years ago
Hi Izzy; Use clay and stack those firebrick into a J -tube using established sizes , properly support a barrel over top of the riser ... watch your feet don't get hot ... or don't start the sage brush on fire. You won't have any trouble boiling water!

posted 5 years ago
So do you think the primary problem is that I didn't seal cracks between the bricks with clay?

I'm very new to actually trying to do anything with rocket stoves, and have never seen one in operation. I'd like to get at least a marginal success before I spend money on materials and design guides/plans.
Erica Wisner
gardener

Isaac Bickford wrote:So do you think the primary problem is that I didn't seal cracks between the bricks with clay?

I'm very new to actually trying to do anything with rocket stoves, and have never seen one in operation. I'd like to get at least a marginal success before I spend money on materials and design guides/plans.

you want to be successful without buying plans....

I guess I'd say good luck on that one.  Try to find the "one year later" or "update #4" type videos on YouTube.  There are a LOT of first-time enthusiasts' experiments out there, blind leading the blind.

Or see if you can get in on free plans, or very cheap plans.
There is a reason we publish plans, and that's because this field of working with fire and masonry is super-old, and plans are the next best thing to seeing a working example as built by someone with more experience.
Getting the 'concept' without seeing one working is like trying to re-invent the wheel based on words like "bearing" and "friction" and "axle".
It's kind of like saying you don't want to buy a car or bicycle until you have figured out wooden wheels.  Roll a log onto your foot.  Or try to make an egg hold still.  Then get a bike.
It's a lot easier to reverse-engineer a bike wheel bearing than to understand the concept without ever seeing one.

Maybe try working from the diagrams in our Operator Manual - that's only a few bucks, not a big investment.
https://permies.com/t/40988/Rocket-Mass-Heater-Manual#319766
If you are good at reading scale drawings, you should be able to re-create the proportions even though I left the actual dimensions as fill-in-the-blanks.

I guess you may be past that stage by now, but it still made me chuckle a little bit.
Hope it all worked out to your satisfaction!

I went ahead and put these up, for those interested in super-hot "cooker" rockets.
(This one really is a better blacksmith's forge than a cooker, the cook had to put a grill on top with bricks on it, and vent off a lot of the heat.)