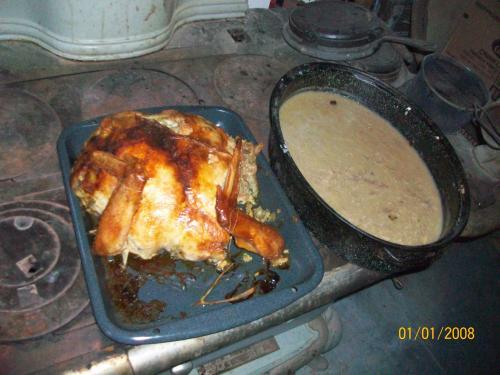 Deboning was done from the back slowly with a kinda sharp mid size knife seraded to cut but not too sharp to cut too fast or cut the skin. I first removed the back bone from end to end on both sides and kept the skin in tack. I then removed the carcass as i had to bend open the leg bones and wing bones to get in between them to sever those joints. Then i cut out the large wing bone and then both leg bones but i left the skin but i did remove the lower leg meat with the tendons which makes for great soup stock meat.

You can see i removed the big wing bone too, but left the last two sections and the lower leg meat got taken out to use as meat for soup later on which was cooked in the bones stock pot on livingroom wood stove, but the skin was left to skewer closed.

NOTE: Dark meat from turkey legs are so much better for soup stock meat as it doesn't get dried out or tough in soup like white meat.
I got three bags of meat for 3 soups and 3 jars of juice for making soup later and the rest of the meat went into the pan with drippings and the rest of the stock.

When i cooked the bones i made sure i covered them completely and thats how much water i used. In that pot was the back and neck and carcass and leg bones and large wing bone and the giblets and heart and liver and water covered and cooked slowly about 6 hours to allow it not to boil but the meat fell off easily.

The stuffing was made from dried bread (2 loaves of whole grain mixed grain) i diced into squares and i left in a strainer bowl next to my livingroom wood stove the day before to dry out. That mixed with 1/2 celerey and 4 winter radishes and 2 small butternut squash and 3 onions and 1 garlic "all of them diced up into 1/4 inch by 1/4 inch bits" and then i added a dozen eggs and about 1 cup of stock and well that was a lot of eggs but i had a lot i needed to use up. I stired that all up and it became a nice mixture. I also added some black walnuts i have growing here.

I held the wings up with string and a skewerto keep it out of drippings as it cooked and then after its cooked a while i cut the strings and it stays up but then made sure it was away from the breast meat skin so that can brown. Then after 2 hours with this 13 lb bird minus bones i remove cover and cook for another say 45 minutes.

The bottom of roasting pan with drippings and some stuffing that fell out became the pan to make my gravy on top of stove. I add the juice from the bones i cooked and then added back any white meat or meat i don't want to save for soup later. Then i got about a 1/4 cup of flour and 1/8 cup corn starch mixed with water and slowly poured it into the pan while stiring and the gravy started to thicken as it started to roll almost to a boil and then it got moved away from the heat and the turkey was removed and al la dinner time..

There was enough from a 13 lb bird minue 3 lbs of bones to make at least 6 servings with gravy for later meals. That can be frozen too and eaten at any time. I'll probably just eat turkey and stuffing and gravy for the next 3 days with my mom.

The woodcook stove i got up to 600 degrees then slowly opened the door to get it to around 500 degrees with the roasting pan and turkey in it. The roasting pan had a cover and that kept it from buring.

After cooking for the 2 hours i then removed the wooden skeweres and string holding wings up.

The roasting pan sat on 2 inch tall firebricks and the rack so it never was up near the top.