Olga Booker wrote:
In the North of France they do 'Coq à la bière' which is pretty much the same except you replace the wine with beer. It is lighter and I admit to prefer it to 'coq au vin'.

Anyway, tonight I cooked wild boar ribs with cabbage, carrots and roast potatoes- all from the garden, followed by apple crumble with cream and a dash of agave syrup.


Ohhh. Now I want to try Coq à la bière with a gluten-free beer. Lighter sounds great because the coq au vin was a bit heavy.

posted 2 years ago
Today I prepared the first Sweet Dumpling (ever). Oh my, I guess this will be my favourite squash/pumpkin and I will grow them every year now.

First I steamed the squash for about 20 minutes.
In the meantime I improvised the filling by making a very small batch of very thick béchamel sauce. I added about 3 tablespoons cream cheese, 2 tablespoons blue cheese, some bread crumbs (I use the ends of my sandwich loaves for that purpose) and chopped walnuts, of course I added some salt, thyme and pepper as well.

I cut open the pumpkin, scraped out the seeds and inserted the filling, and into the oven. So good! The pumpkin tastes a lot like chestnuts (which I love but they are quite pricey). I would say better then the Kuri.
IMG_20201027_190559.jpg

posted 2 years ago
I don't think we have a lunch thread, so I post here.

Today I had a nice recipe by Yotam Ottolenghi in my FB feed:
Roasted root veggies with Harissa chickpeas, tahine salsa and dukka.

I had soaked chickpeas overnight and was looking for a good way to prepare them (apart from Hummus, which I will make tomorrow), so this came in handy. I felt a bit decadent preparing this on a weekday noon but it was really delicious and not too complicated.
I used a beet from the garden, a small pattypan squash I still had and added bought potatoes and carrots.
The dukka was made after a recipe from Hugh Fearning Whittingstall (with pistaccios, sesame, cumin, coriander, salt - I left out the chili as the Harissa was quite hot!). First time I tried it, I might be officially addicted to dukka!

Here is the recipe link:
https://www.theguardian.com/food/2020/oct/31/yotam-ottolenghi-recipes-autumn-veg-buttered-kohlrabi-yuca-fries?fbclid=IwAR2AKKm5Im8Lq2aYzvkRJy_S5m4K2TIPxxutIf9uiwsryp0V332JG3aG9XM
(I left out the lemon-oil mix because I did not have fresh dill)

posted 1 year ago
Only my second time making this dish: Salisbury steak with mashed potatoes.

Tasty and quick to make. Who knew? 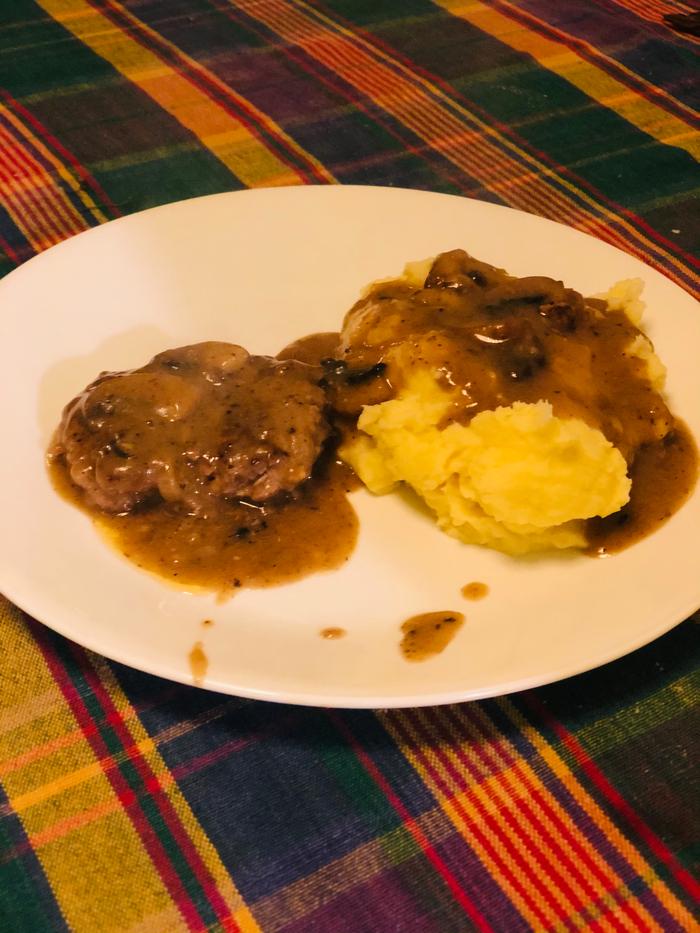 Come to Wheaton Labs in January to become a Garden Master

posted 1 year ago
Today I made a Rösti (like a huge potato latke without eggs, just seasoned grated potatoes) with three different seasonal salads:

* Beetroot from the garden, with orange slices and some horseradish dressing

* Brussel Sprouts (first time ever I harvested some from my own garden!) thinly sliced with apples (local), Emmental cheese and caramelized almonds

All very tasty, the last two from Hugh Fearnley Whittingstall's book. Would you believe that my kids did not try one of them?? According to them, they all had at least one icky ingredient which normal people don't (have to) eat.
Ahh, do you sometimes feel like a Permie parent failure? Sigh...

posted 1 year ago
It's still quite hot at the moment, so we had a cold dinner (quite normal here in Germany).
Freshly baked bread with spreads and cheeses, and as a dessert homemade frozen yoghurt with salted coconut almond caramel and strawberries from the garden. Very tasty and frugal, but some work of course.
IMG_20210621_200201.jpg
IMG_20210621_200253.jpg

posted 1 year ago
The weather has been cooling off, so I made some black bean soup.

posted 11 months ago
I had already mentioned my modular "building blocks" cooking in the bean thread, so here is an example of a dinner I made yesterday:
For the bean soup, I used the white beans I had soaked overnight (with some baking soda) and then cooked in the pressure cooker (without baking soda as the beans sit in the vapour, not the liquid), and which I had in a container in the fridge to use as a staple.
I also had some diced onions, so I fried those in olive oil, added some of my last sad tomatoes, the cooked beans and seasoned with salt, pepper, half of a chili pepper which grows on my window sill, rosemary, a bay leave from my mum's garden in Spain (rather fresh, it makes such a difference!) and a splash of white wine.
Mashed it only partly with a submersion blender - so delicious!

The sourdough bread was freshly made, but I mostly have some frozen in the freezer which is as good as fresh when you thaw it.

The salad was part German Wirsing kale, marinated with oil and lemon in a container in the fridge as another building block, some oven-roasted potatoes made in batch some days ago, one boiled egg boiled in advance in batch, and a tahineh yoghurt herb dressing, made in batch and stored in the fridge.
It all came together quick and was a pleasure to eat.

Now if only my children would accept that kind of eating, but they are very picky - neither kale nor legumes or salads for them.
IMG_20211212_200045.jpg 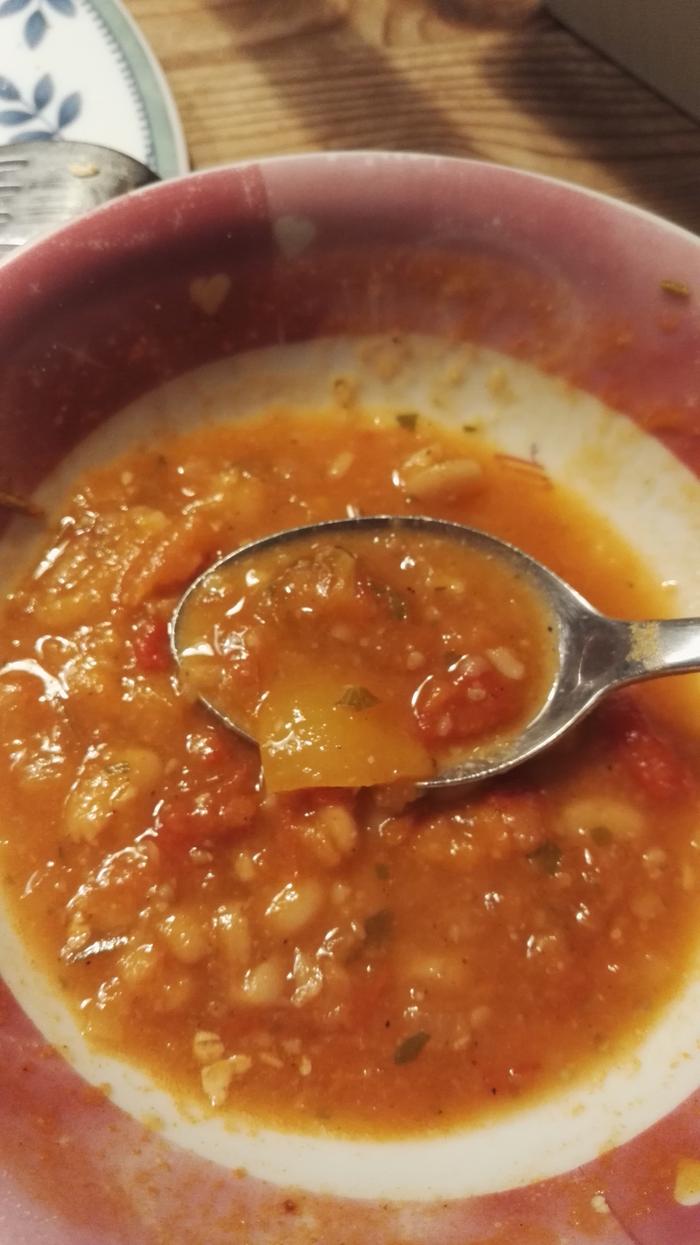 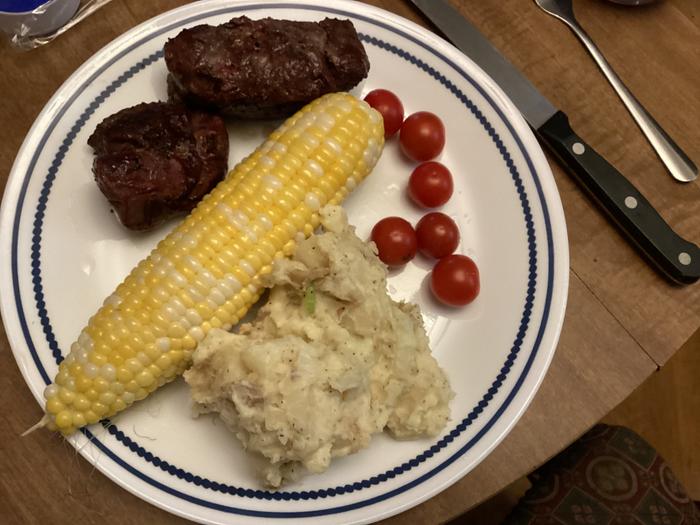