Choose your own adventure maze

posted 1 month ago
Yesterday, my kids said to me, "Mama, make the hardest maze ever!"

Weeeell, I'm not skilled at maze making, so I compensated by making it a Choose-Your-Own-Adventure maze! Chose your start point and where you want to go, and see if you can make it there!

You can also just make it an adventure. My son started out as a pirate and took over the map, gaining the dragon for a fire source, and the chickens and tree for food sources (eggs and apples), and taking control of everything else (as any pirate would, I guess).

My daughter went and visited all the princesses and fairies, and then explored the rest of the map, saying "HI" to everyone.

It's very open ended, and it's fun to see how the kids go about playing with it!

I figured I'd already drawn it, so I might as well share it with the internet in case anyone else wants to enjoy it!
Adventure-Maze-copy.jpg
CCI12222022.jpg

posted 1 month ago
What a fun idea! I'm going to print it out for my kids. Thank you for sharing this!!

posted 1 month ago
Thank you! My boys are enjoying it. The pictures are very well done.

Sandra Gill
Posts: 7
Location: San Antonio, United States
2
posted 1 month ago
This maze is perfect for so many reason it is cold outside, Christmas and many other Holidays are stressful so this will keep many busy for at least a few minutes. God bless
Nicole Alderman
steward

posted 1 month ago
I'm so glad everyone is enjoying it!!!

Nicole Alderman wrote:I'm so glad everyone is enjoying it!!!

Haha, that must be the underestimation of the year! This is awesome. Thanks for sharing it, it's inspiring me to try to bring more fun and creativity into our day today :).
Justyna Izykowska
Posts: 2
1
I like...

posted 1 month ago
I love the maze as it looks like a lot of fun.  Too bad I don't have any little ones to share it with.

I had fun tracing my way just by looking at the maze on my computer screen.

The maze is beautiful.

Adam Hackenberg
Posts: 76
1
posted 1 month ago
I’ve been a pirate, use to go on rants sounding like Barbosa, did a lot of uranium and mutated, gold always found with uranium, this is pirate central, loot central. Center point for cargos of loot, to be sent out to gravitational anomalies, mostly in the mountains, buried to super amplify those anomalies, in the hope of bring conductive warfare to the land, used like satellites for the hound dog hunter, heat seeking psychic warfare. The black fighting chickens are the American black dragon, hidden by the mask of a dragon as a chicken. Dragons mostly existed in dinosaur periods, have large catacombs with their favorite pets. Dragon loot is buried near the center of earth, accessible through river Styx, dragon masks all that recovered. The mask dna covers the latent dna, that if given favorable conditions may take over, form phase 7 dragons. The castle of the wicked witch of west, is underneath the forbidden fruit, on which it was to protect RIP. I stole the fruit then killed it bringing it to me, large underground castle at this location from old gold mines. The castle a fortress, ancient to guard against the satanic temple filled with demons below that. I love that game!
Nicole Alderman
steward

posted 1 month ago
Since everyone seemed to like this one so much, and it was a lot of fun to draw, I thought I'd make a permaculture/homesteading version. I've got a lot of it sketched out, but I'm not quite sure what to put in the remaining space. I've got room for about 6 more things. Any ideas?

Here's the thread about it: https://permies.com/t/206980/art/Permaculture-Homesteading-Maze-missing 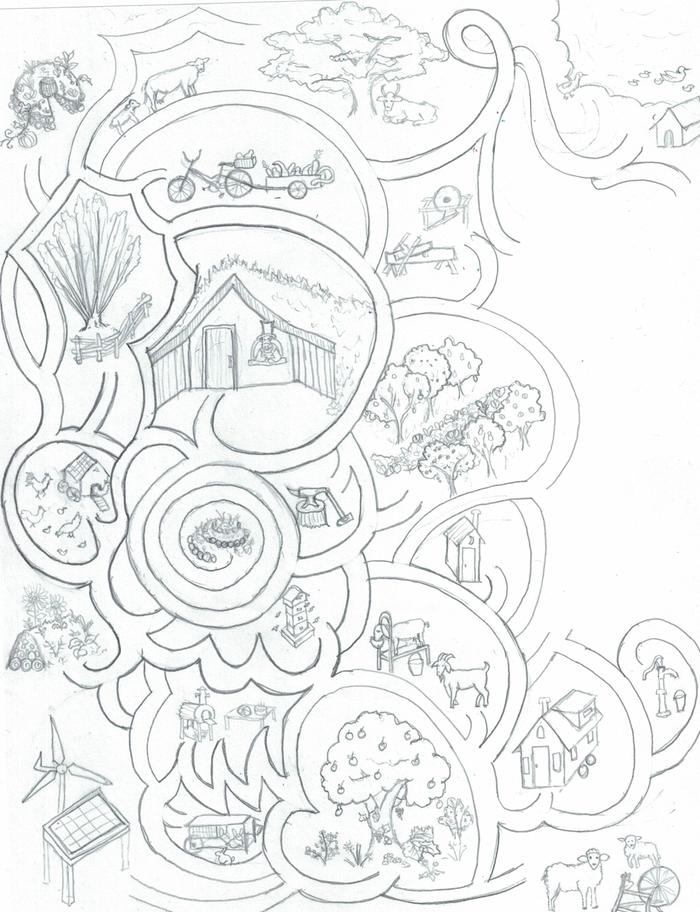 posted 4 weeks ago
The new maze is finished! It's a bit more maze than adventure, but my kids have found it fun (they kept having me print out new copies as I was working on it). Hopefully you all enjoy it, too!

Big thanks to J Brun for the pollinator garden idea, and for Pearl Sutton for the treadle sewing machine!
Chose-your-homestead-adventure-permaculture.png