posted 9 years ago
Here in Ladakh, Lepidium latifolium is native and is traditionally eaten, but in the US it is apparently an invasive weed in many places. If you've got an infestation near you, here's how to to get a bountiful yummy free harvest. It does take two days of waiting, but it makes a rich smooth cooked green.

It is one of the earliest plants to appear in spring (probably because it is shooting up from its rampant, thick and deep runner roots). Pick about 4 - 6 inches of the top when the whole thing is between 4 and 10 inches tall, or until it starts to form tiny flower heads. The stems may be a little thick but you will find that they are still tender. Pick a lot, because with boiling they will shrink down, and you will like them and want more. Throw them into a pot of boiling water for a about five minutes, until they change color to dark green, and a strong bitter mustardy smell fills the kitchen. Now drain them and dump them into a pot of fresh water, and leave them overnight. Tomorrow, taste a leaf. If it is still bitter, change the water and soak it another day. Ours is sometimes delicious after one day, and sometimes takes two. When the bitterness is gone, fry it in oil, butter or other fat, just as you would spinach or any other green. We find it smoother and richer than other greens.

Since pepperweed is so abundant, and since we have few fresh vegetables in the winter, we dry a lot of it. We simply pick the shoots and strew them out to dry in the sun. In winter, we follow the same process: boil for 5 min, then soak overnight; and it usually only takes one overnight then.

The exact same method is used around here for caper shoots (Capparis spinosa), which are even more delicious but not nearly as plentiful, and not listed as an invasive anywhere. Boil 5 minutes, drain, soak in fresh water a day or two, and then fry up: YUM!

Both of these greens are traditionally eaten with chapattis for breakfast here, and I must say it's a compulsively satisfying habit.

posted 9 years ago
Stopping the bus with all our students for 15 minutes twice in May, we collected sacks and sacks full to dry for the winter. Yay Lepidium! 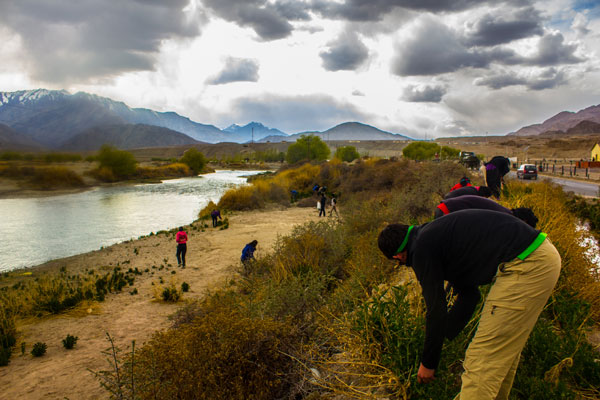 posted 8 years ago
Bumping this in late April, the season for collecting perennial pepperweed here.

An article about the nutritive value of Lepidium latifolium:


Results showed that this plant is an excellent source of glucosinolates, notably sinigrin that is present in very high amount (~70–90%). Its value ranged from 149 to 199 µg per g fresh weight. Fatty acid composition analysis showed that its leaves were abundant in unsaturated fatty acids, specifically linolenic acid (18:3) whose percentage is about 50%. Higher glucose and crude protein along with higher nitrogen to sulfur ratio, supplements the nutritive value of this plant. Based on total phenol, flavanoids, free radical scavenging activity and DNA protective activity showed that this ecotype of perennial pepperweed contains high antioxidant properties. The percentage inhibition for O2− scavenging activity ranged from 41.3% to 83.9%.

Here's our second batch this year, having been boiled for 5 minutes and now soaking in a fresh change of water for a day. 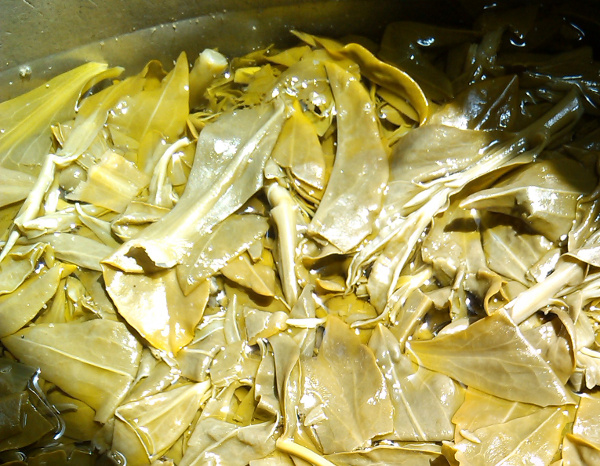 posted 4 years ago
Don't know if you are still monitoring this post, but I wanted to ask if you also dry the fruiting pods and use them as a pepper substitute?  Just read out about the plant in "Eating From the Wild" by Dr. Anne Marie Stewart and Leon Kronoff written in 1975 and found some growing on our land.  Stewart just writes of eating the plant fresh so your info on how to dry and use them later is most helpful. Thanks. :^)

posted 4 years ago
Yes, still here! I don't really see what I would call "seed pods", and if there are seeds all, they are minute, like powder. So no, I haven't tried that.

Does she recommend boiling and soaking to leach the bitterness out, or some other way of preparing or eating it?

posted 4 years ago
Thanks Rebecca for responding.

The seed pods are the tiny round things on the heel of your hand in the picture.  They look somewhat like fish scales.  They have a peppery bite when they are fresh.  I was wondering if they are peppery when dry.  If so they might make a pepper substirute year round.

The 2nd picture is a snapshot of the book I mentioned and what Dr Stewart does with the fresh pepperweed.  She calls it pepper grass or poor man's pepper, but it is the same plant (Lepidium). She doesn't boil.
seed-pods-marked.JPG
pepperweed-peppergrass-poor-mans-pepper.jpg

You might look for smartweed/Polygonum punctatum. Some is absolutely peppery, some reasonably mild.
http://www.eattheweeds.com/smartweed-natures-pepper-and-pharmacy/


we have a different peppergrass, Lepidum virginicum, which probably is up there. It is fine in salads in the spring. I haven't tried the pods for zing but maybe I will try. The greens shown in Rebecca's pictures are much much bigger than we get here. The whole plant gets about 5" max before bolting.

posted 2 years ago
Hi, Rebecca et al! Here in southeast Arizona we have Lepidium lasiocarpum and L. thurberi (we have both on our land and in the immediate vicinity, and re-reading the species descriptions has made me realize why some of our pepperweeds look so similar and yet so different, whaddayaknow). They're reportedly annuals, and "the green or dried seedheads have a distinct and pleasant peppery taste like watercress," according to Winter Forbs of Southeastern Arizona (one of a series of little pocket guidebooks produced by local ranchers). But when we've tried eating them we've quickly spat them out because the taste is slightly peppery but more bitter and floral in a way that smacks of "don't eat that" (and we eat a lot of wild desert plants around here, including some very tasty bitter florals like soaptree yucca blossoms).

It's really interesting to read of your method of soaking. If we can catch enough next spring before they flower, I think we'll try that. Thanks!

Are you gathering a lot of it up there this spring? How are you all doing there in the mountains?

"Do the best you can in the place where you are, and be kind." - Scott Nearing

Nigel Kosovo
Posts: 7
posted 1 year ago
Hello to all of you.  I am looking for seeds or plants of lepidium latifolium since it has the biggest root in the genus other than meyenii.  Meyenii, maca, has 28g protein in that root so anything comparable would be great.  Shoot me an email at olinnigel@yahoo.com.
Rebecca Norman
gardener

posted 1 year ago
What do you want to use the roots for?

It is listed as an invasive in many places, so if it is not already native or naturalised where you live, I wouldn't recommend introducing it.

About "poor man's pepper" mentioned above, my wild-food mentors, Cata and Blanca, told me (I think) that it was the root that used to be dried and ground as a sort of pepper. The roots do give off that strong mustardy smell.

im imlach
Posts: 13
Location: egypt, pokhara, ladakh, dharamshala
posted 10 months ago
Hi Rebecca,
So youre at SECMOL- i do beleive we corresponded a few years ago- i HAD been living there for 8 years before the mass insanity, snd i so so miss it!

Cheers for sharing that about pepperwood- when (not if) i get back to ladakh, i shall hunt that out. always a big fan of free wild naturals.....

By the bye, hows the university coming along? a great idea, hope it takes root....

im imlach wrote:Hi Rebecca,
So youre at SECMOL- i do beleive we corresponded a few years ago- i HAD been living there for 8 years before the mass insanity, snd i so so miss it!

Cheers for sharing that about pepperwood- when (not if) i get back to ladakh, i shall hunt that out. always a big fan of free wild naturals.....

By the bye, hows the university coming along? a great idea, hope it takes root....

Hi! This is embarrassing, I don't recognise your name or photo. Were you the guy who talked about making a wooden wind turbine at SECMOL? But wasn't he Dan or Dave or something? And made the pair of dishes to extend our mobile phone signal? Hmm...

If you are back to Ladakh in April, then ask about collecting shangsho (Lepidium latifolium), and if you are here in late April through mid-June, capers are great to collect. Locally called kabra, but Ladakhis only use the first shoots as a vegetable, and most people here don't know about collecting the flower buds and berries in the European style.

SECMOL goes on, very well, and has some newer better solar heated buildings. Programmes are a little limited due to covid, but still similar to before in general, just a lot fewer people coming and going all the time. Wangchuk has started an alternative university, HIAL, in the neighbouring village of Phyang, about 8 km from SECMOL.