Marc Troyka
pollinator
Posts: 372
Location: East Central GA, Ultisol, Zone 8, Humid
16
posted 8 years ago
I started this project last year since I had a lot of time and wood on my hands, and have been wanting to actually get dirty with some real permaculture. It started out as four beds, but they were too small and some of them were shaded out, so I combined them into two larger beds. The final form was chosen based on sun, water, and to blend and contribute to the already existing geometry of the house/porch. The main woods were American Sweet Gum (Liquidambar Styraciflua: including large numbers of their woody seed pods) and American Tulip Tree (Liriodendron Tulipifera).

Other things that went into them:
-2lbs of fish meal, spread evenly
-2lbs of kelp meal, spread evenly
-Inoculants (MycoGrow, Earth Juice, Azos; azos only covered the tomato bed and part of the corn bed)
-Topsoil and some animal manure compost
-Blood (courtesy of mosquitos)
-Sweat (it's definitely a lot of work!)
-Love, joy, compassion, anger, tears, and the rest of the entire catastrophe that's been my life since I started this project.
-Lots of attention and observation, even when I'm not really doing anything to it.

I ended up having to reseed the tomatoes and a bunch of other things since I buried them the first time when they were supposed to be surface seeded. Luckily I had plenty of extra seeds and a good rain to wash them in.

Photos:
1) You can see how the sun hits them, and a bit of the water flows
2) From a different angle, you can see a silt trap I built with sticks and gumballs. I intended it to slow the flow of water, and I think it's working.
3) Closeup of part of the silt trap, blurry gumball in foreground.

4) Corn sprouts (circled), plus some ivy and other volunteers.
5) The area uphill of the piles. It's been significantly greener from better water retention, although I raked some of that out in building the silt trap. There's some goose grass in the foreground, which has been a popular volunteer.
6) Some other volunteers enjoying the microclimate.
SAM_0057.JPG 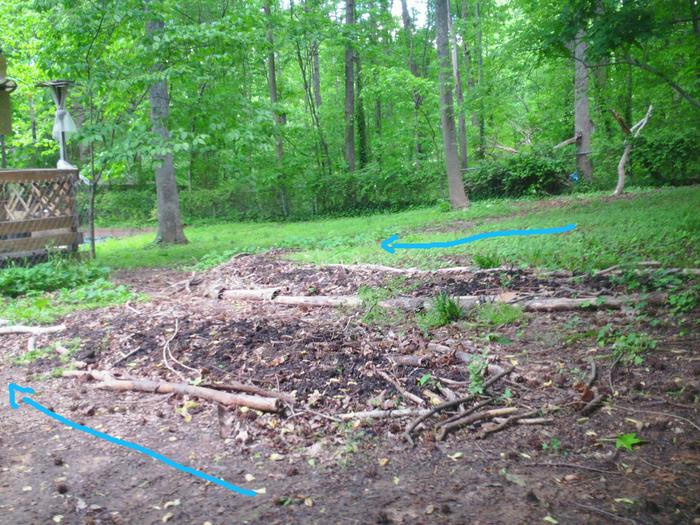 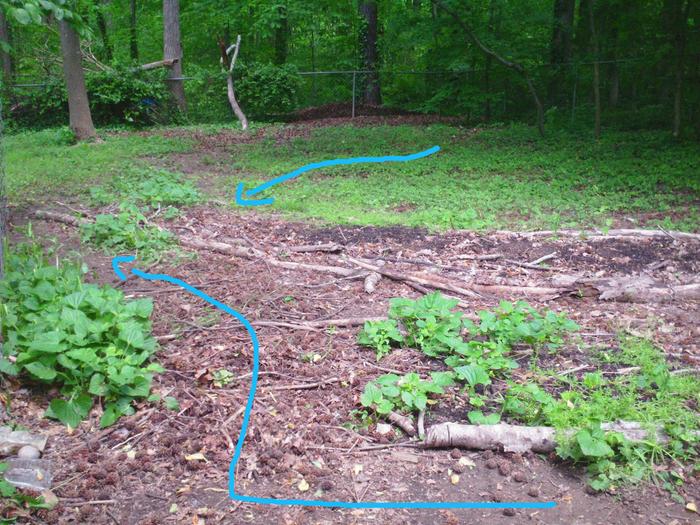 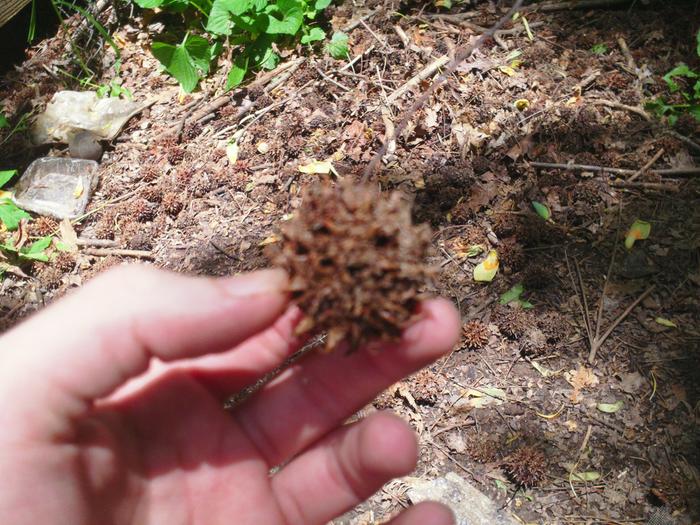 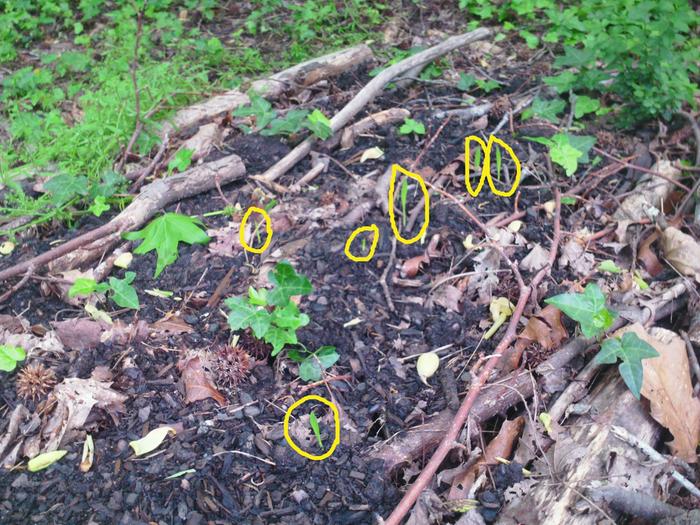 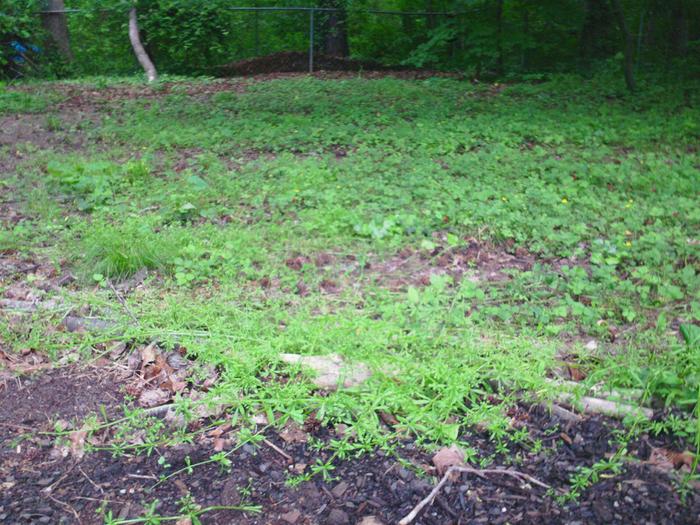 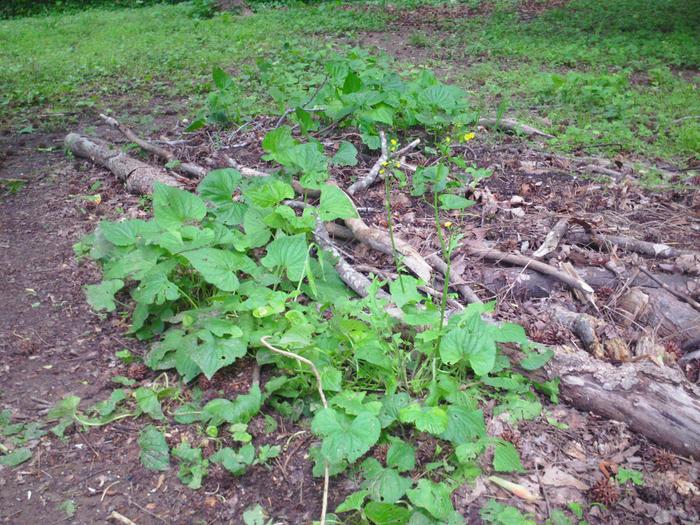 Do you have polite, non-hardcore ivy over there?
In these parts, ivy anywhere is soon everywhere!
Morgan Morrigan
Posts: 1400
Location: Verde Valley, AZ.
posted 8 years ago
should try turning some of those spiky seeds into activated charcoal.

looks like they would be ideal surface area for water treatment and distillation cleansers...

Marc Troyka
pollinator
Posts: 372
Location: East Central GA, Ultisol, Zone 8, Humid
16
posted 8 years ago
@Leila: Nope, that's the regular invasive stuff. It started in a neighbor's yard, probably from the original landscaping. It took over the trees it was growing under and recently spread all over. I think the main reason it leaves my garden alone is because it doesn't like very much direct sunlight.

@Morgan: I don't intend to do anything nearly that complicated!

Well, so far the only thing that's sprouted is the strawberry popcorn. It's been too cool so far for peppers or tomatoes to germinate, if they ever do. The topsoil stuff I ended up using was more like mulch, and a lot of the seeds just don't seem to like it. We also got heavy rains on two major occasions that were hard enough to physically trample the corn (even knocking a few over), as well as partially destroying the silt trap. I didn't manage to get a good pic of the damage, but I did get some pics of the reconstruction. Even with being partly washed out it seems to have done its job quite well; I found dark soil collected in the washed out parts, and more collected in the surviving parts.
SAM_0065.JPG
SAM_0066.JPG
SAM_0067.JPG
SAM_0063.JPG
SAM_0068.JPG
Marc Troyka
pollinator
Posts: 372
Location: East Central GA, Ultisol, Zone 8, Humid
16
posted 7 years ago
Well, I quit posting pictures last year because the only thing that sprouted was corn, and after a series of hard rains every last plant got trampled and literally fell over and died. The post mortem revealed that the corn's roots had just been dangling around in the wood-chip-like "topsoil" and literally had nothing to hold onto. Nor had the worms had time to break down the organic matter and decompact the soil underneath since the decision to combine the piles had been last minute. In retrospect it's astounding that the corn was able to sprout and grow as much as it did under those conditions, although comparing them to healthy corn seedlings you can see that mine were all runts.

This year I started earlier and did some more research and observation. I was able to cover parts of the piles more completely, and I cut down the working part of the piles to the sections which got the most consistent sun last year. This year my seed poker tells me that I have 6 full inches of nice brown decompacted soil under and around the piles (where leaves were built up in the fall) although I've learned that heavy clay kind of turns into muck when it's high in organic matter. Something to fix some other time, anyway, but I did add a cup of dolomitic lime to each section to fix the pH and provide needed minerals. I also learned that although extensions will tell you to plant your corn 2" deep, most kinds of corn do best when planted 4" deep, and Pueblo corns (from the southwest US) can be planted 8-12" deep. Corn in particular requires 50F minimum soil temps in order to do well, which I found out occurs down here around the end of March or the beginning of April, nearly a full month before everywhere else (conditions depending). Squash, melons, tomatoes, peppers and a few other things require 60F minimum temps and it still isn't quite that warm yet. Learning to watch the weather and soil temps in my area has really taken the guesswork out of planting.
SAM_0110.JPG
SAM_0111.JPG
SAM_0112.JPG
SAM_0113.JPG
SAM_0114.JPG
SAM_0115.JPG
SAM_0116.JPG
SAM_0117.JPG