Gwen Lynn
Posts: 736
posted 10 years ago
You never know what you'll see in Nat'l Geographic. This picture was in the November issue. Kinda threw me for a loop! 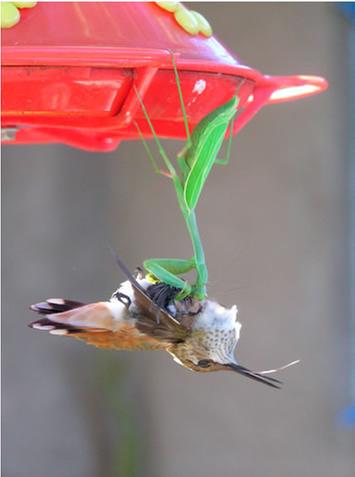 Leah Sattler
Posts: 2603
51
posted 10 years ago
holy moly! I had noooo idea that was possible! never even crossed my mind before! poor bumminghird

Emil Spoerri
pollinator
Posts: 425
15
posted 10 years ago
especially strange since hummingbirds are known to attack eagles
Gwen Lynn
Posts: 736
posted 10 years ago
This photo totally blew my mind when I saw it in the magazine. I searched for it online & also found youtube vids of similar occurrences. On the basis of hummingbirds that I've seen, I think the bird in the picture is immature. That would explain it's size (& I agree, it doesn't look like a very big mantis) and the spots on the bird's throat plumage. Also, the beak looks kinda short to me, another indicator of a youngish bird. It looks like a young Rufous Hummingbird.

I've heard that young hummingbirds will tire themselves out & fall asleep at a feeder. Something similar happened at my feeder, but I think our young bird was torpid from a drop in temperature, more so than anything else. It was such a bizarre thing. I noticed this tiny hummer sitting on my feeder. I got closer and closer, but it didn't move. I reached up and lifted it right off the feeder. Opened my hand and it flopped on its side, eyes closed. I thought it was dead! Then it just flew off.

I'm not surprised to hear of hummers attacking eagles, birds can be pretty territorial. That reminds me of a visitor we had in my neighborhood a while ago. A great horned owl was sitting on top of some pine trees. There was a great commotion, and we could see at least 3 different species of birds (cardinals, blue jays & mockingbirds) all dive bombing this owl, trying to run him off. He just sat there, like a statue, for about 5 or so minutes. A mockingbird literally flew head on into the owls back; struck it with such force that it stunned itself and plummeted like a stone into the tree branches. Finally the owl found something more interesting to do and flew off. Wild & crazy!