Advanced rapid composting: What was and could have been. Sad story.

Hello, I have not logged in for quite some time.

I was recently making remarkable progress with what turned out to be improvised methods of Liquid compost (not just compost tea), and rapid composting.
I was doing volunteer work for a homless shelter that had gotten into organic gardening.
I had built a structure to accomodate virtually any kind of composting: traditional, worm culture, compost tea, and something I had done before in liquid composting.

A staff member who originally gave me full support would okay almost anything I wanted to do, would promise minimal materials, but in the end rarely came through. this forced me to repeatedly change course, improvise, and try to do whatever I could, as there was a lot to compost, more than anything I could use in the space I had to work with. It was incredibly promising.

This structure was 16 feet wide,

At one end of this structure I was building a "Worm house" for vermiculture, a compost wheel, and a long space for 55 gallon plastic drums for whatever I could do with/in them. They would never get around to getting the worms for it, and although I was able to bring in a lot of materials, I could not afford to also spend cash on everything. This was a problem in general, as things were promised but rarely followed through with.
At the other end of this structure, I was in the process of building a slightly more traditional large compost wheel.
Because of all the options vs. difficulties, I was constantly having to change direction, improvise, etc.
The situation was somewhat agravating, but was also a mother of invention.

Towards the end, I had made fantastic progress in a very different kind of composting...

In composting, you have various possible organisms, food, moisture, air/oxigen and food. The compost material being the food of course. This basis is very simple, but there are so many ways to work with the process, as long as the organisms have what they need, with the air a nd water circulated, the organisms tend to be happy and productive. The strange development was when I saw the process either or both a respiratory and digestive process.
The result of the difficulties mentioned were barrels full of material backed-up and waiting to be put into process, and the edge of just going bad, due to the difficulties previously mentioned. I had to do something - so I started cutting the tops off 55 gallon plastic drums, put them on the structure, ran 1 1/2 pvc tubing into the drums, and began circulating small amounts of water through the drums and materials with a small waterfall pump, and air, both suction and blowing, via a small wet/dry vac through the pvc plumbing. As I mentioned, the result was a cross of a respiratory and digestive process which in turn resulted in rapid composting, liquid composting, compost tea, etc. Things were happening and there was great potential.

One method I was experimenting with was using the pvc plumbing and wet/dry vac to blow air from the bottom up through the material and drums to maintain a balance of moisture, and aerating the material.
Another method was the opposite, to reverse the process, and suck air and excess moisture out of the same drums, and thus drawing in fresh air from the top.
One curious if not surprising development was that discarded plants, which had been buried in the material for even weeks were found to be growing like crazy despite seemingly ugly conditions and no light whatsoever.

The most important part of the whole project was to get a good 3 conductor programmable timer to run the wet/dry vac for a short time, shut it off, and start it again, in a regular cycle, likely on an hourly basis, as I was having to do so manually, but could not be there to turn it on and off all day and through the night.

The whole project was finally really working, I was on the virge of something very promising, and maybe a wek away from producing 3-9 cubic yards at a time of super rich compost, several gallons at a time of either liquid compost or compost tea - in fact. as this system was designed and built, it would have also been able to provide a regualr, daily supply of liquid compost or compost tea for watering the entire garde area - when suddenly the entire project was ended, the whole structure torn apart, and most of the materials were thrown away. A horrible waste.

What happened was that certain individuals or 'clients' of this homeless shelter were taking off with my tools, taking off with materials meant for the composter, even as thay had been cut to length, despite my asking them not to. The staff of the shelter did not value composting, even though they needed soil for their gardening, which itself had not been setup or cared for. They said that the compst project was causing "Conflict", when the conflict was because of people taking things, interfering, and causing all kinds of problems.

They did not respect composting, because it was "dirty stuff", and did not respect me, because I was nothing more than the "The compost guy", despite the fact that I had also worked hard on many other projects there.

This was not just tragic to the possibilities of what could have been, but they also wasted and threw away materials that were perfectly good, and which they needed for other things as well. It made no sense whatsoever.
When I tried to explain these things, and try to work with them to find what would be more agreeable with them, they then decided that I was a problem, gave me the run-around, treated me very disrespectfully, and it took me weeks just to get my tools back - at least the tools that had not already been stolen.

It was an incredible senseless waste in every way. One one hand, I have nothing but regret for all I tried to do for them, and am determined to never make such a mistake and waste my time, effort, tools and materials in such a wayt ever again. On the other hand, the one good thing that came of it was my progress and discovery of various ways to process compost.

There are many more details about the structure, process, etc. that I have not writtewn here, and may add to as time goes on, including making a gull mock-up of what it was and how it worked in virtual reality to fully explain it all so SOMEBODY out there might pick up where I left off.
I have two hopes: One, that there is value in what I accomplished to others who will hopefully take the process further, and Two, that maybe, maybe I might be able to do this again for someone who will actuall value such a thing.

The pictures attached are from the day they suddenly tore everything apart, and took a lot of it straight to the dump.
I am allowed only three pictures - I would like to add more if at all possible - can someone tell me how, or could the forum admin. make some allowance in the interest of fully explaining the structure and processes I was working with, so others can do same if they like ? 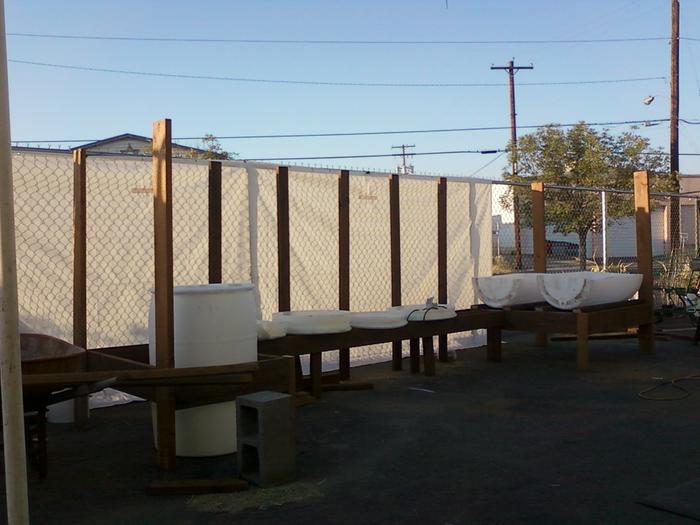 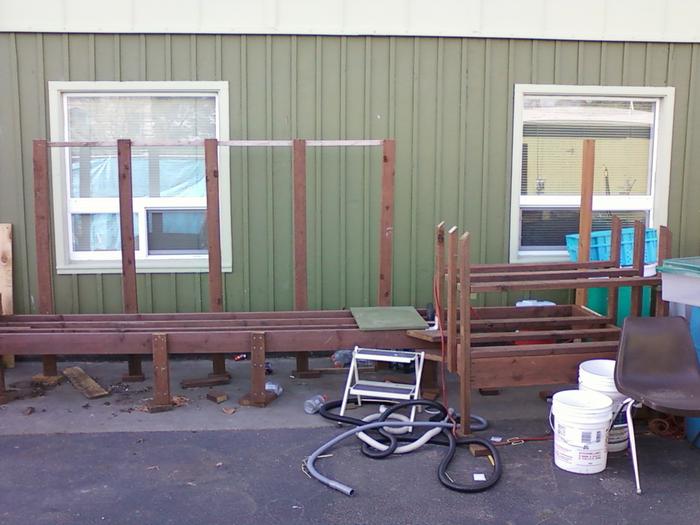 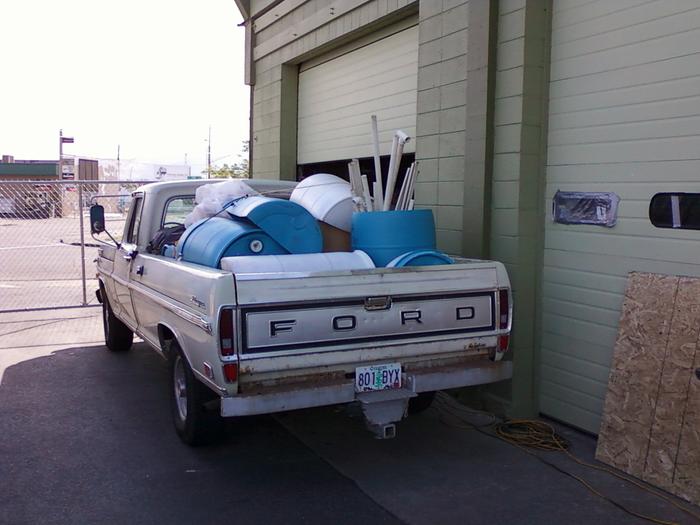 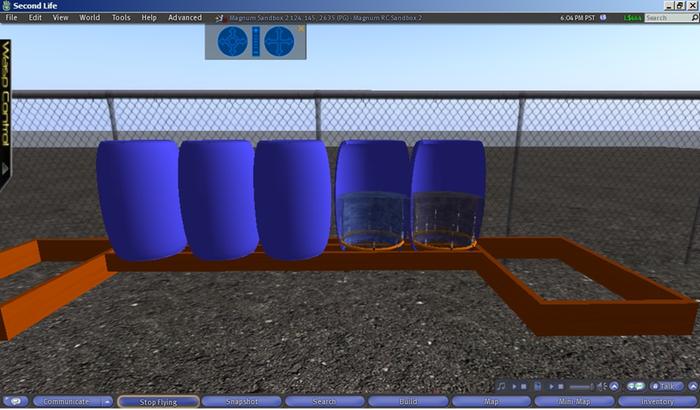 M Mitchell
Posts: 10
posted 7 years ago
Willikers! I would have skipped the whole air pushing and pulling and timers and gone straight to homemade bokashi or lactobacillus fermentation with those barrels. No power tools needed. Put in material, add innoculant, squish down, cover, go home for day.
John Abacene
Posts: 114
posted 7 years ago
That can be tricky, and its also about the difference between aerobic and anaerobic bacteria growth.
Aerobic = Not much if any bad smell, usually smells like fresh earth.
Anaerobic = Bad smell, 'rotting' as opposed to natural breakdown.
It is also possible to have both, naturally the aerobic would reside in the top of the material, and anaerobic toward the bottom where oxygen would become depleated and not have a means of penetrating or circulating.
That's why in traditional, old-fashioned composting you have to turn it over now and then. My method was geared toward eliminating the work of turning or moving anything. The processes you mentioned are interesting, but my circumstances were a cross between desparate necessity and experimentation. It was working very well, and would have produced copious amounts of useful resource.

posted 7 years ago
John - Shame about your project. All I can say is, if it isn't appreciated take your efforts somewhere that it will be.

Your ideas look interesting, however I can't help but think that a rather complex setup with multiple barrels/times etc... looks rather over engineered? At home we run two large compost heaps - 5ft x 5ft x 5ft - will fill one over a summer or so with a mix of yard waste, humanure and kitchen scraps. We cover the top with hay from the meadow to keep the top layers covered and warm. We never dig it over or aerate it, just come back in 6 months and spread it on the beds. What was the reasoning for not just going for a big heap and leaving it?

I was under the impression that turning the compost was more about ensuring that everything was evenly composted, rather than oxygenating the core. Any oxygen added by turning a pile is used up in a matter of minutes. Turning in the outer surface means all the material spends some time in the hot, sterilising core of the heap.