Kate Potter
Posts: 3
posted 7 years ago
I'm in the process of erecting a 22 x 40' hoophouse. Dreading the backbreaking traditional bed preparation. Has anyone ever put hugelkultur beds in their hoophouse? Any reason not to do it?
Paulo Bessa
pollinator
Posts: 356
Location: Portugal (zone 9) and Iceland (zone 5)
13
posted 7 years ago

illinois permie wrote:I'm in the process of erecting a 22 x 40' hoophouse. Dreading the backbreaking traditional bed preparation. Has anyone ever put hugelkultur beds in their hoophouse? Any reason not to do it?

I have set a plastic cold frame over one of my hugelkultur beds, and a fleece hoophouse, over another hugelkultur bed. It works nice. I did it because I wanted to create maximum increase in soil temperature. If you have plastic instead of the fleece, then you will get the soil getting dried quickly and stress plants. Fleece is better because it allows rain to enter. Or install drip irrigation, something I did not do.

Julie Ashmore
Posts: 16
Location: Near Molson, North Central WA State, Zone 5a
1
posted 5 years ago
I think it's a great idea to build a hoophouse over your hugelkultur, or any kind of structure that captures heat, such as cold frames, tunnels, etc. After the considerable investment of time and energy in developing your hugel bed, it makes sense to do something to help capture the heat generated by decomposition. Most of my hugel beds are buried underground. I've tried a few different approaches toward the goal of capturing their heat. One was an underground cold frame, with about 2 feet of hugel under it and hugel all around it. You can check this one out in the two-part blog post, starting at http://woodforfood.blogspot.com/2014/04/underground-cold-frame-part-i.html. It worked really well in that my swiss chard overwintered here in North Central WA State! The downside is that I think I made it too deep and it doesn't get much direct sun all the way in the bottom of the pit. If I did it again, I'd make it longer in the direction of the path of the sun, so that there was more real estate beyond the shadow of the south wall. It was a good learning process. Even a traditional cold frame on top of a hugel bed is a good idea; this week I put one on top of my horizontal spruce hugel bed (http://woodforfood.blogspot.com/2015/02/cold-frame-fun.html). Now I'm working on building simple, larger covered frames for some of the other beds and can post again when I have those done. Season extension is important where we live and hugelkultur can help make it happen.

How did it go with your hoophouse Paulo?

posted 5 years ago
I used this technique to create the raised beds in my hoop house a couple seasons ago. They've worked out much better than planting into the ground for me. The plants seem to take less water and the beds heat up much sooner in the spring. The only reason I can think of not to do this would be if you didn't have any logs readily available and would have to source them from off site, other than that I say go for it. It works great!!! I'll attach a picture from shortly after I constructed mine. The beds are about three feet high and the interior is sunken by about 18 inches to create a level interior space.
IMG_20130707_205018_463.jpg 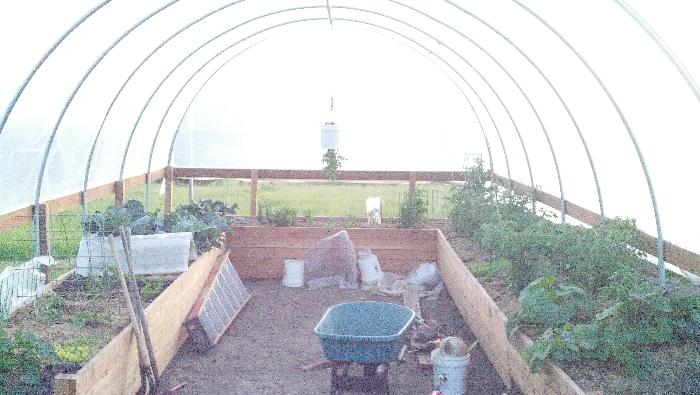 Here's an update on the low profile bed covers I've been building on top of underground hugelkultur beds: http://woodforfood.blogspot.com/2015/03/vegetable-jail-season-extension.html. It amazes me how many plants don't need more than 7" to grow, especially during the first couple months of growing -- radishes, carrots, beets, lettuces, etc. Very low profile covers work best for me, living in an area that gets gusty, powerful wind. Plus they are less labor and materials intensive, and I'm really enjoying this experiment.
20150305_145619_resized-2.jpg

Ben Perryman
Posts: 9
posted 5 years ago
DIY polytunnel/greenhouse is something ive wanted to try for ages. Nice pics guys.
One problem area i never understood, irrigation.
If your beds are covered, how do you irrigate? Swales along the outside feeding into the bed? Some complex rain harvesting?

Its been a blocker to having a go. I tried rigging up something over some tomato plants using a shower curtain last year. Lol is was not good.
Dave Dahlsrud
Posts: 531
Location: North-Central Idaho, 4100 ft elev., 24 in precip
47
I like...

Ben Perryman
Posts: 9
posted 5 years ago
Soaker hose off the mains water or your own harvesting?
I lay soaker hose/perforated land pipe as backup but ideally i like to get to the point where i water very little if at all, something easier to aim for here in the south of England than for many others (yes, it rains a lot)

If your beds ran tight to inside of the hoophouse, do you think a swale around the outside would feed into the beds? I suppose really its would be like a French drain, so would help clear thr water from the foot of the structure (less mud and puddles)

posted 5 years ago
A drain or something around the perimeter would definitely help. On my hoophouse I extended the bed on the North side out past the outside of the hoop. If you look closely at the picture I posted you will notice on the right hand side the bed slopes up to within about a foot of the horizontal support framing while on the other two sides the top of the bed is about three feet from those boards. That area under the framing is essentially a peak on a hugel mound. If you looked at the bed from the outside it would look more like a traditional hugelkulture. While it doesn't capture as much water as it could, that section of bed is considerably wetter than the other two. I imagine you could extend the beds beyond the hoop on all sides and harvest moisture that way....might work pretty well if you had the room to do it. I'll try to find a picture of what I'm talking about and post it later if this isn't making sense.

Ben Perryman
Posts: 9
posted 5 years ago
No that make perfect sense. Looks like you have done a great job & I'll give it a go when I get the chance. Your bed are deep as well!
I hope they work out well.
Pia Jensen
Posts: 218
4
posted 5 years ago

Julie Ashmore wrote:Most of my hugel beds are buried underground. I've tried a few different approaches toward the goal of capturing their heat. One was an underground cold frame, with about 2 feet of hugel under it and hugel all around it. You can check this one out in the two-part blog post, starting at http://woodforfood.blogspot.com/2014/04/underground-cold-frame-part-i.html.

That's really fantastic. Is it structured to "feed" the hugel as it slumps? I'm amazed by the scale of some of the hugels. So big. I'm building smaller hugels in my small area.

I'm curious about rebuilding hugels after a year....